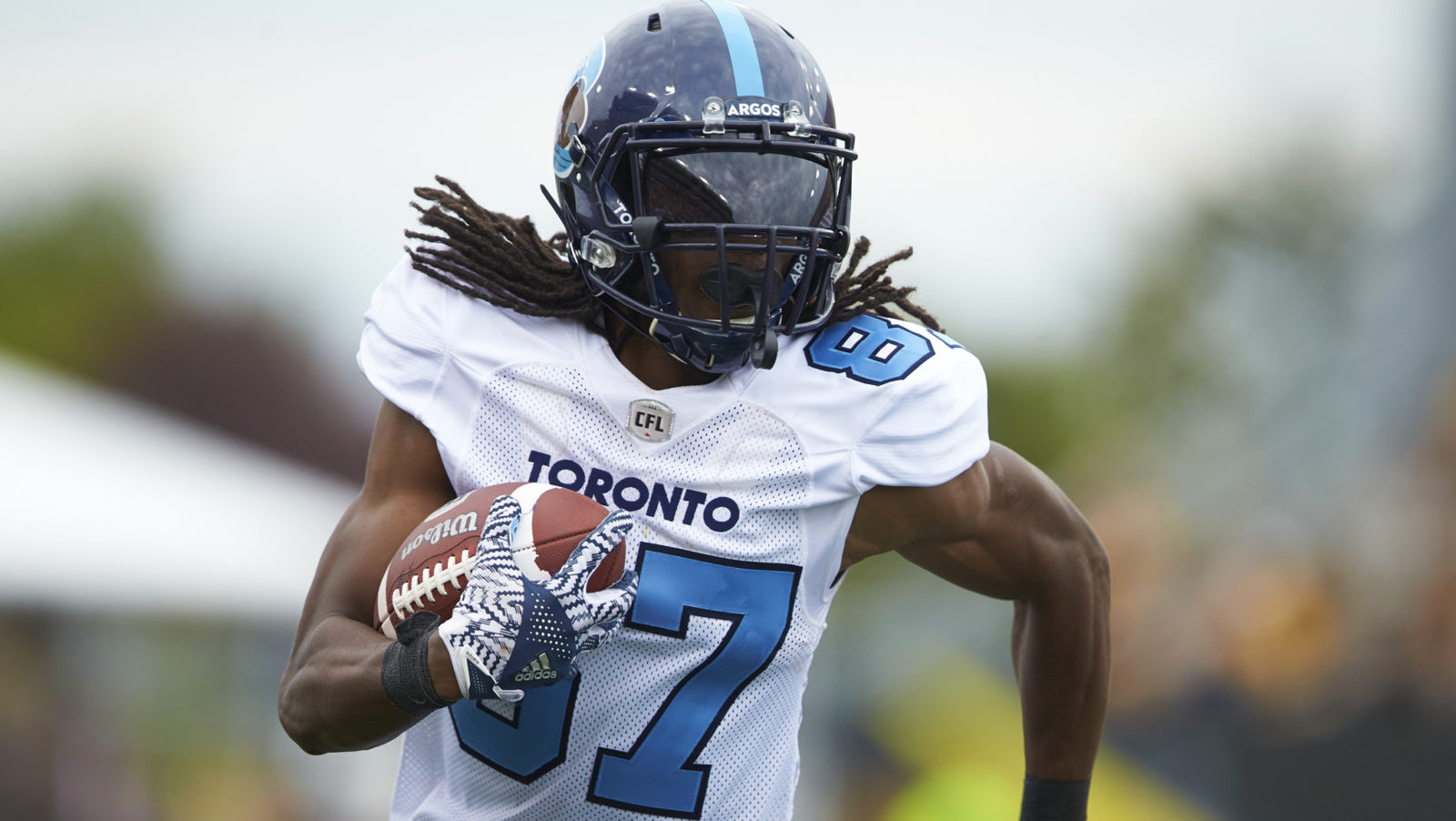 TORONTO — The CFL.ca writers have spoken, and with some interesting games on the schedule this week, the picks were more divisive than usual.

The Toronto Argonauts get the Ottawa REDBLACKS this week, and after beating them by a wide margin in the last meeting, they’re the only team that received votes across the board to come out victorious in Week 18.

Have no fear, Winnipeg. Jamie Nye has your back. He was the lone individual to choose the Bombers, as the rest are on the Montreal Alouettes’ side for this game.

Here are the picks for Week 18. 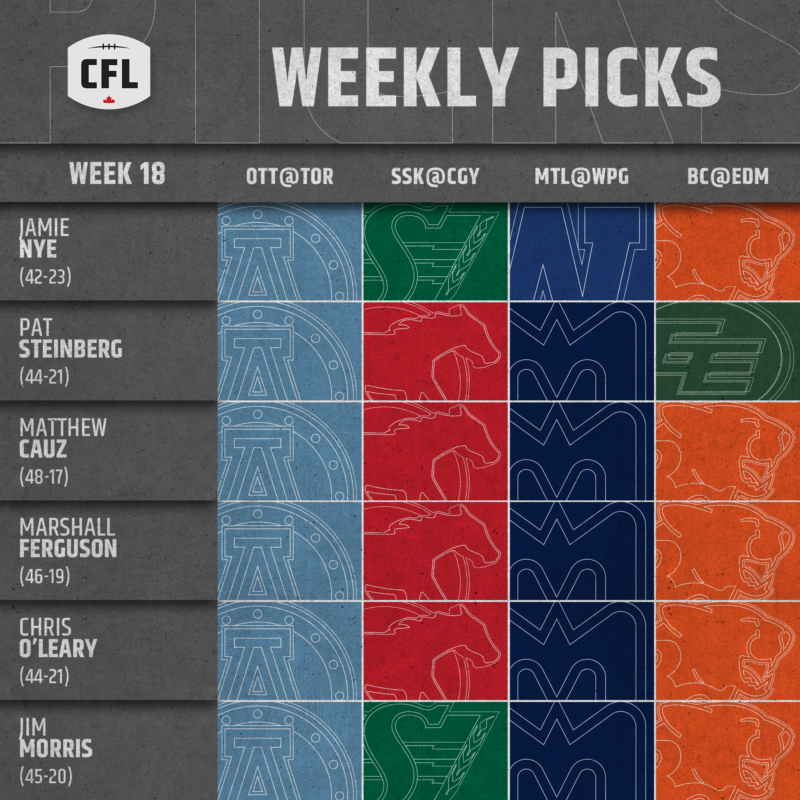 We open Week 18 action with a matchup between two teams that are looking ahead to 2020.

In the first matchup between these two teams back in Week 13, the Argos went into TD Place and rolled to a 46-17 victory.

The REDBLACKS named Will Arndt the starter for this game at the beginning of the week. The 26-year-old has completed 20 passes for 185 yards in four outings this season. Jonathon Jennings will be backing up Arndt while Domonique Davis will not dress due to an injury. Running back Mossis Madu will also be out for this game, leaving Brendan Gillanders and Greg Morris to split touches out of the backfield.

Toronto will also have a new face under centre — sort of. McLeod Bethel-Thompson will be the man running the offence. MBT has been the backup for the last two games behind James Franklin. He came in to relieve Franklin in Week 17 against BC, tossing for 94 yards and a touchdown on 9 of 14 passes. He’ll be looking to get the likes of Derel Walker, S.J. Green, and Armanti Edwards involved in the pass game early. In his last game against the REDBLACKS, James Wilder Jr. also had his best outing of the season, getting into the end zone on three occasions, with two of them coming through the air.

There isn’t a lot on the line besides pride and bragging rights in this one. Both teams will meet up again in Week 20 — again in Toronto — to conclude their season series.

The Riders will travel McMahon Stadium for a matchup with the Stamps to conclude the second half of the Friday doubleheader.

This will be the second and final meeting between the two foes in the regular season. The first game saw Nick Arbuckle and the Stamps walk out of Mosaic Stadium with a 37-10 victory.

However, it’ll be Bo Levi Mitchell under centre for the rematch. Mitchell had a great outing despite the loss in Week 17, throwing for 464 yards and a touchdown. Don Jackson ran for 58 yards and a touchdown on 12 carries but the story was the air attack, which was led by Josh Huff and Hergy Mayala. The former had 149 yards and a touchdown while the latter had 116 yards, 68 of which came on a catch-and-run play in the first quarter. Reggie Begelton and Eric Rogers also finished with 98 and 82 yards on the game, respectively.

Saskatchewan will counter with Cody Fajardo, who had 300 yards and a touchdown through the air in Week 17 against Winnipeg. He also led the team in rushing with 47 yards on nine carries. Shaq Evans had the best game of his CFL career, catching seven passes for 193 yards and a score. The Saskatchewan defence also had three sacks, two interceptions, and a forced fumble.

The Riders are currently in the top spot in the West Division, but beating Calgary at McMahon will be easier said than done. They’ve won four of their last five and are looking to avoid their second straight defeat.

Montreal clinched its first playoff berth since 2014 in Week 17, and they’ll be after their second straight victory when they head to IG Field to play the Bombers on Saturday.

The two teams treated us to one of the most exciting games of 2019 during their first head-to-head back in Week 15. Montreal scored 21 points in the fourth quarter to storm back and beat the Bombers at Percival Molson Memorial Stadium.

Vernon Adams Jr. didn’t have his best game of the year in Week 17, but even he had to give it up for the Als’ defence, who had two sacks, three forced fumbles, and an interception while holding the Stamps off the scoreboard. The Montreal pivot still had 206 yards on 18 of 29 passing. William Stanback had 59 yards on 13 carries and Eugene Lewis finished with four catches and 86 yards.

Despite only posting six points in Week 17, it was a solid day numbers-wise for the Bombers’ offence. Chris Streveler completed 65 percent of his passes for 254 yards along with 41 yards on the ground, Andrew Harris ran for 74 yards on 12 carries, Darvin Adams caught eight balls for 109, and Nic Demski had four catches for 70 yards.

Both teams have clinched playoff berths. Montreal is trying to track down Hamilton while Winnipeg will be aiming to avoid dropping their fourth straight contest.

We conclude Week 18 with a clash that could determine the final playoff spot up for grabs.

Mike Reilly had another massive game against Toronto in Week 17, throwing for 276 yards and a career-high five touchdowns. Three of those landed in the hands of Bryan Burnham, who finished with 145 yards. Duron Carter also had 90 yards and caught all seven balls thrown his way. John White rumbled for 121 yards on 20 carries in the win.

The Esks will be without their feature back for this game. C.J. Gable will be out with an injury, meaning that Shaq Cooper is the man that’ll be taskes with touches out of the backfield. He has 128 yards and a touchdown on 22 carries in two games this season. Logan Kilgore looks to b the starter again this week. He completed 71 percent of his passes for 233 yards and a touchdown in Week 17 against Hamilton. Expect the trio of Greg Ellingson, DaVaris Daniels, and Ricky Collins Jr. to feature prominently in this matchup.

Edmonton can lock up the crossover playoff spot with a victory in this game. However, the Lions would sit just two points back of the Esks with two games to go if they can come out on top.