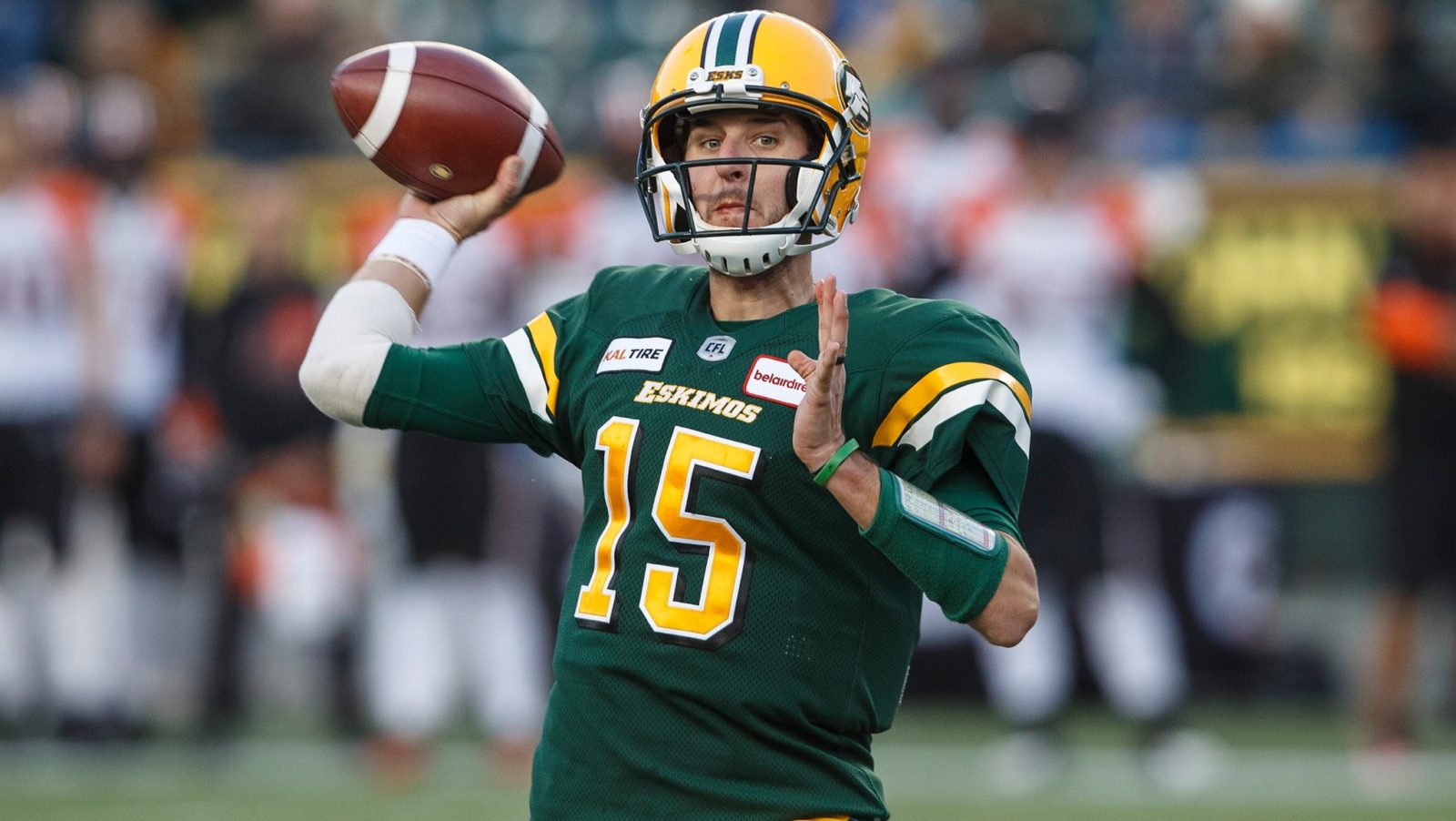 EDMONTON — Greg Ellingson totaled 133 receiving yards to lead the Edmonton Eskimos to a 19-6 home win over the BC Lions on Saturday night. The Esks improve to an 8-8 record while securing a playoff spot.

An early field goal from Sean Whyte gave Edmonton the lead, and the Lions found themselves facing major adversity when starting quarterback Mike Reilly left the game with a suspected broken left wrist midway through the first quarter.

A rushing touchdown from running back Shaquille Cooper extended the Esks’ lead in the second quarter, and Whyte’s third field goal of the game gave Edmonton a 16-3 lead heading into half-time.

The Lions clawed their way closer in the fourth quarter with a field goal from Sergio Castillo, and T.J. Lee came up with a late interception in the end zone. But a field goal from Whyte in the final minute sealed the victory for Edmonton.

Ellingson surpassed 1,000 receiving yards for the fifth straight season, and Ricky Collins Jr. achieved the same accomplishment for the first time in his CFL career.

Edmonton took an early lead on a 22-yard field goal from Whyte that was set up by a 15-yard catch from Collins. The Lions suffered a major loss later in the opening quarter when Reilly was forced to leave the game with an injury after taking a hit from defensive end Kwaku Boateng. Backup Danny O’Brien took over at quarterback for BC.

The Esks extended their lead in the second quarter on a 63-yard scoring drive that was capped off with a two-yard rushing touchdown from Cooper. Cooper carried the ball four times for 24 yards to set up his second rushing score of the season, and Whyte kicked the convert to give Edmonton a 10-point lead.

Logan Kilgore came up with a solid throw for the Esks late in the opening half while evading pressure from defensive end Odell Willis. Kilgore scrambled to the left and made a tight 14-yard throw on the run to Ellingson to convert on second down. Ellingson followed the play up with an 18-yard grab one play later, but the drive stalled and Edmonton settled for a 49-yard field goal from Whyte.

The Lions got on the board with under a minute to go in the half on a 20-yard field goal from Castillo. Lions leading receiver Bryan Burnham helped set up the kick with a 20-yard catch. But Edmonton managed to extend the lead once again just before half-time, as a big 40-yard catch from Ellingson put Whyte in position to make a 44-yard field goal as time expired.

The Esks appeared to come up with a turnover on defence in the third quarter when Forrest Hightower and Nick Usher combined on a tackle to knock the ball out of Rashaun Simonise’s hands. But upon further review, it was determined that Jevon Cottoy initially recovered the fumble for BC before being ruled down by contact.

Defence was the story for the remainder of the third quarter, and BC came up with a key goal line stand on third down to keep the Esks out of the end zone. Linebacker Kevin Haynes made the tackle on quarterback Troy Williams to force the turnover on downs.

Running back John White got the following drive going with a 25-yard rush, and a pair of short completions from O’Brien set up a 46-yard field goal from Castillo that made the score 16-6 to start the fourth quarter.

A 41-yard punt return from Christion Jones gave the Esks renewed momentum late in the game, but the Lions came up with a timely interception on defence when Lee picked off Kilgore in the end zone.

But Edmonton got the ball back just three plays later when defensive back Tyquwan Glass picked off O’Brien while the quarterback attempted to complete a pass to Duron Carter on third down. Whyte then added a 21-yard field goal to seal the victory and secure Edmonton’s spot in the playoffs.

Week 19 will see the BC Lions host the Saskatchewan Roughriders next Friday at 10:00 p.m. EDT., while the Edmonton Eskimos will get a week off before they host the Riders in Week 20.