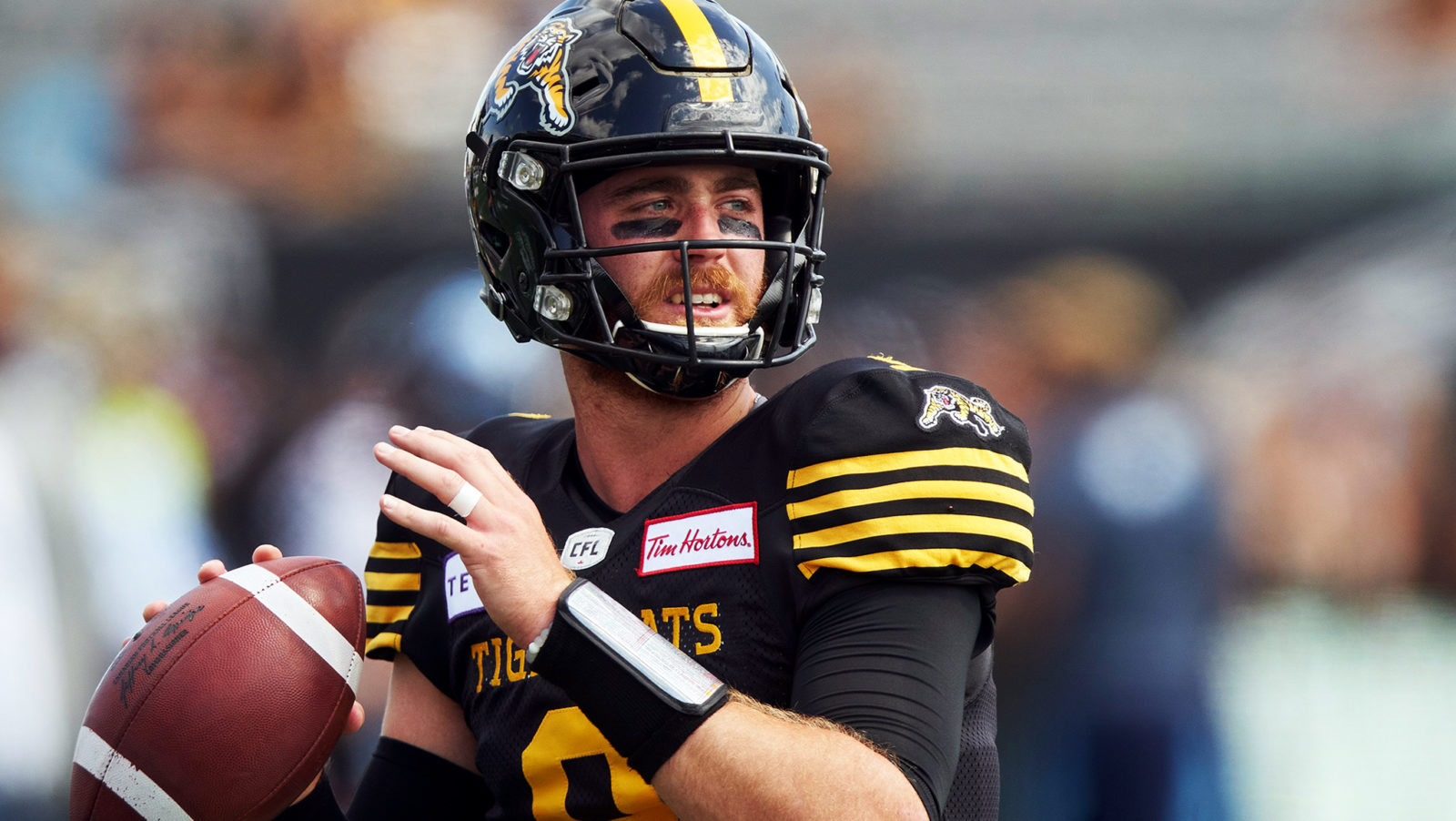 Week 19 is a tale of two teams, as the Montreal Alouettes and Hamilton Tiger-Cats take all the top spots in the projections in matchup with Toronto and Ottawa respectively. Despite high salaries, they still wind up as some of the best values on the slate in these very exploitable matchups.

Week 18 wasn’t a stellar Fantasy outing for Vernon Adams, but it’s no surprise he’s on top of the projections this week given the matchup with a Toronto defence that allows the most yards (9.1) and TDs per pass attempt this season. Almost as importantly for Adams’ prospects is that the Argos defence also allows the second-most yards (5.46) and TDs per rush attempt this season. It may be difficult for some Fantasy players to envision spending near $11K on a QB as cost-effective, but Adams is still the second-best value at the position. Given the expected efficiency and the projection to run the second-most offensive snaps this week (58.1), it’s not difficult to envision a scenario where Adams puts up his best numbers this season.

The potential cheaper alternative to Adams is Dane Evans, who will lead the high powered Ticats offence versus a similarly porous REDBLACKS defence on Saturday afternoon. Hamilton projects for the most offensive snaps this week (59.1) and will get to run against an Ottawa unit that is allowing the third-most yards (8.18) and TDs per attempt in 2019. Evans lacks Adams’ rushing upside, but he does get the benefit of throwing to the most dangerous one-two punch in the CFL in Banks and Addison. As -17 point favourites over Ottawa, Hamilton should score early and often, but the blow out risk does raise some questions as to whether the Ticats stars will see a full game of action.

As is the story at nearly every position this week, it is headlined by Alouettes and Tiger-Cats. William Stanback was a surprise addition to the Week 18 injured list, but if he’s able to return to the starting lineup this week, he’s likely to have one of his biggest games of the year. The Als’ project for the second most rush attempts this week (22.6) and will do so versus an Argos rush defence that allows the second-most yards per rush attempt this season (5.46). It’s somewhat absurd but given the matchup, Montreal projects for a rushing TD nearly once for every ten carries Friday night. If Stanback is lost to injury again this week, Jeremiah Johnson would become the top RB option on the slate and at a much lower salary.

Andrew Harris quietly went about another 20+ Fantasy point outing in Week 18 versus Montreal, posting 166 rushing yards and a TD. The problem for Fantasy players is that that kind of production doesn’t justify a near $10K salary. Also, potentially troubling for Fantasy players is that he was held to one or fewer receptions for the third time in six games. This weeks’ matchup versus a Stampeders defence that allows the fewest yards per rush attempt (4.59) and a well below average rate of TDs per rush attempt won’t make Harris’s path any easier. It’s difficult to justify spending a quarter of the salary cap on a player in this spot.

William Powell had another solid multi-TD outing in Week 18, despite having only nine touches in the game. He now leads all RBs in touchdowns this season (13) and faces a Lions defence that allows the third-most TDs per carry this season. Given his volatile workload, scoring a TD is pretty much a must for him to be able to pay off his salary. Like Montreal, the Riders project for a rushing TD nearly one in every 10 attempts this week but also like Montreal, it’s possible the quarterback vultures those scores. Powell is an interesting boom or bust play on Saturday night in Vancouver.

The third offence that projects for a very high probability of a rushing TD this week is the Hamilton Tiger-Cats. Ottawa allows the highest rate of rushing TDs per attempt this season (24 total), and that makes any ball carrier for the Ticats a potential scoring machine. Tyrell Sutton seems to have taken over the majority of the workload in the Hamilton backfield over the past couple weeks but still carries some risk of losing significant touches to Addison, Banks, Bennett, Coombs, or Watford in the red zone. Despite the risk, the mid-tier salary makes him difficult to pass up versus Ottawa.

The opposing REDBLACKS backfield is likely to be a timeshare situation as well but split between Gillanders and Morris rather than between a half dozen individuals. Gillanders’ salary, just barely over the minimum, makes him an interesting option following his 12 Fantasy point outing in Week 18 but the matchup and expected game script mean that he could just as easily struggle to return value. Ottawa projects for the second-fewest yards per carry this week (4.6) and the fewest yards per target (6.45), which means that as +17 point underdogs, it’s difficult to envision much upside to any of the REDBLACKS’ options.

As mentioned earlier, the Ticats are nearly three-touchdown favourites this week and face a REDBLACKS defence that allows over 300 yards receiving per game along with the third-highest rate of receiving TDs per target. Both Banks and Addison each project for over eight targets in a Hamilton offence that projects for the most offensive snaps this week. Banks get the added benefit of some kick return yards and Addison the bonus of some rushing attempts which gives them both immense ceilings and relatively safe floors. It’s nearly impossible to have both of them stacked with Evans at these salaries but each carries 35+ point upside.

The other high scoring passing offence to target on this slate is the Montreal Alouettes. All of their top targets are significantly more affordable than the Hamilton duo, but their offence is not nearly as concentrated as the Tiger-Cats. Geno Lewis and DeVier Posey will likely see a higher volume of targets, while Quan Bray has higher rates and big-play potential. It’s quite feasible to double-stack Als receivers with Vernon Adams versus a Toronto defence allowing the most yards and TDs per target this season.

Throughout much of the season the Calgary passing game has moved through Reggie Begelton and Eric Rogers, however, the past couple weeks have seen the market share of targets diminish for them while creating larger roles for Josh Huff and Hergy Mayala. Huff’s targets have hovered around five per game outside of one or two ceiling games near double digits. Mayala’s involvement in the offence has been much lower however, near 3.5 targets per game. It’s unlikely his ability to produce double-digit Fantasy scores continues, but near minimum price, it doesn’t take much to meet value. The yards per target allowed by the Winnipeg defence has risen steadily over the past month, as they have now allowed the most receptions of 30+ yards this season (27). Rogers’ more affordable price tag makes him the most interesting option of the group.

With nothing left to play for than pride this season, playing time for members of the Argos offence may be difficult to rely on. If they are going to be auditioning some of their young QBs, including Prukop and O’Connor, it may hurt the efficiency of the Argos receiving corps as well. The matchup with Montreal is appealing given they allow the second-most yards per target in the league (9) but predicting targets and efficiency may be difficult as they go through their tryouts for 2020.

If Fantasy players are going the contrarian route this week – fading the Ticats and Als – Shaq Evans is in the top 5 of all receivers in the CFL for scoring rates this season. The Lions have allowed the second-highest rate of receiving TDs per target this season and Evans is a big play waiting to happen. The Riders, however, project for the fewest offensive snaps this week (52.1)

None of the cheap defence are particularly appealing, but there are a couple of defences in the top half of the price scale that carry some interest none the less. Will Arndt is set to start at QB for the REDBLACKS this week and is averaging over two INTs per 30 pass attempts. A matchup with a Ticats defence that ranks top three in the league in sacks (46) and forced turnover (38) should provide ample opportunities for defensive scoring.

The Riders get a similar matchup versus journeyman quarterback Danny O’Brien that should provide a number of opportunities for sacks and turnovers. The Lions have allowed a league-high 52 sacks to this point, and the Riders should make the most of those opportunities as they are second in the league in sacks (47).

The mid-tier prices on Montreal receivers makes double stacking the Als passing game versus Toronto a luxury that most Fantasy players should be able to afford.

Unlike the Alouettes receivers, the Ticats’ top options are priced through the roof. The savings at QB are helpful but players will still have to choose one or the other between Banks and Addison, with Addison likely the more highly owned option.

With the Tiger-Cats set as -17 point favourites over Ottawa, Sutton and the Hamilton running game may get a heavy workout in the second half of a blowout. Given Arndt’s propensity for turnovers as well, this stack could be an alternative way to exploit the expected game script.