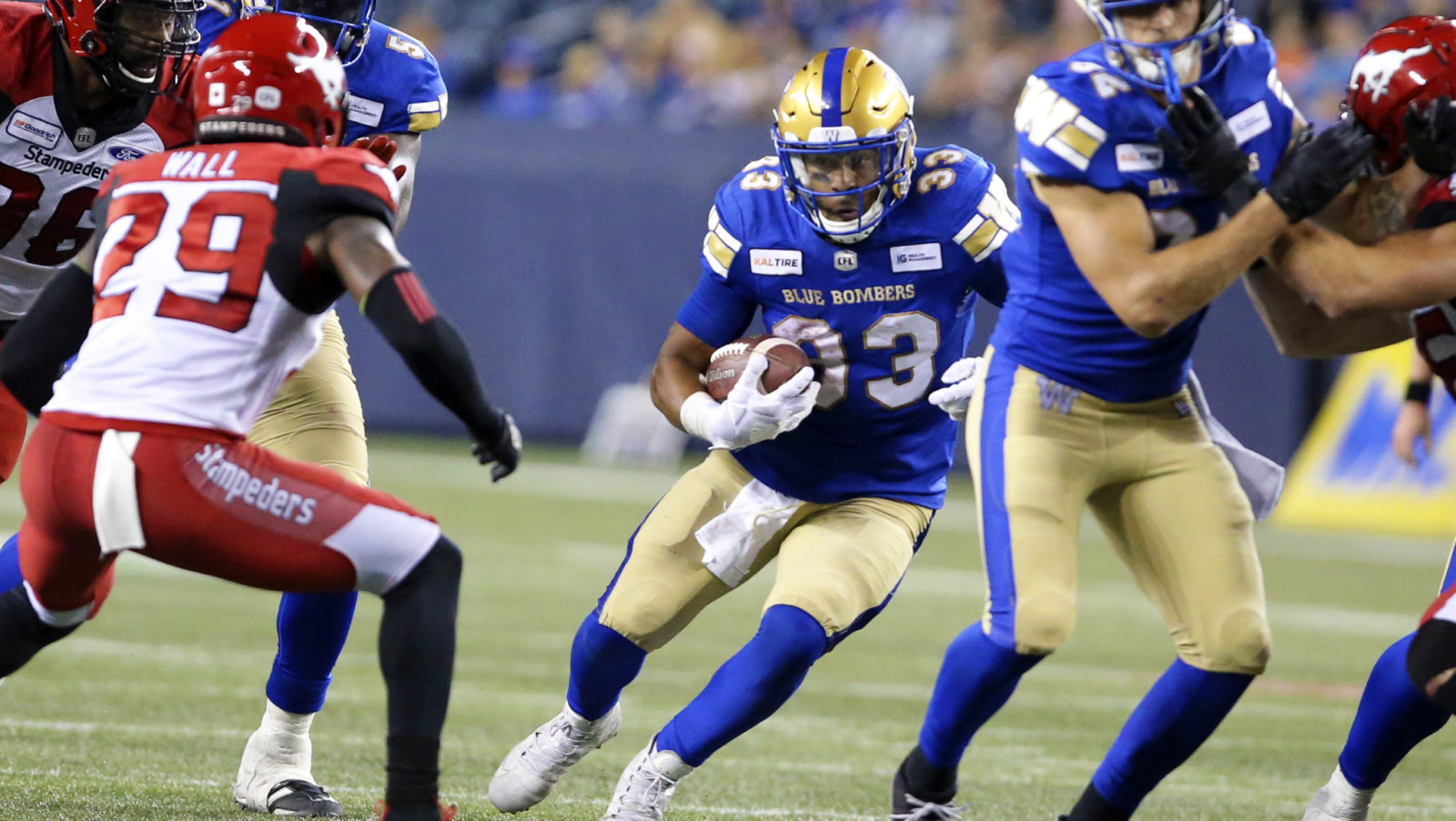 Every now and then, the properties of basic physics are tested in a very simple manner.

Once in a while, you get a version of the immovable object versus the irresistible force.

In Saturday night’s big Week 19 clash in Calgary, we’ll get that, as the Winnipeg Blue Bombers will try to ensure the unstoppable force of their potent running game dictates how the matter will play out, while the Stampeders’ immovable object of a run defence looks to prove, once again, that every action is met with an equal and opposite reaction.

This is the key battle within the larger battle, in a game that will come to mean so much in determining fates in the West Division in 2019.

RELATED
» Ferguson: Look at tendencies versus production
» Morris: Mayala finding his way in Stamps’ offence
» CFL Simulation: Who will walk away with the West crown?

The Blue Bombers’ running game leads the league this season, piling up 149 yards in an average game, and each time running back Andrew Harris or quarterback Chris Streveler – occasionally someone else – rushes the ball, they average 6.1 yards on that rush, also tops in the league. And when it comes to nabbing a fresh set of downs, nobody can touch Winnipeg’s total of 144 first downs gained on ground attack plays.

There’s your irresistible force right there, and one that pulsed its thrusters last week in a win over Montreal, to the tune of 241 yards, averaging 7.1 yards per.

Over on the other side of the ball, Calgary’s formidable front four – backed by run supporting linebackers and defensive backs – has made an opponent’s attempts to breach the security perimeter very difficult indeed, leading the CFL by allowing a stingy 4.6 yards per carry.

There will be other match-ups, other key battle points in this game, there is little doubt of that.

There is also little doubt, though, that the Blue Bombers will lean hard into the run game against the Stamps, the way they did against the Alouettes. Recent history has shown us that Winnipeg’s path to victory is the one that is paved smoothly by their offensive line, with Harris and Streveler zipping through holes and lowering their shoulders to take on tacklers.

It seems the Blue Bombers have more than rediscovered their personality on offence, they’ve embraced it fully, warts and all. One dimensional?

‘Kay. The opposition expects us to run? Cool. Do they think they can force us into throwing the ball instead? Cool, again. We won’t.

At least that’s how it went against the Alouettes. After running over and through Montreal in the first half last weekend, the Bombers opened the second half with a two-and-out on consecutive incomplete passes.

That may have served as a quick reminder to get back to what they’d been doing so well. Or maybe that was just LaPolice’s way of twirling the Als’ defence with a tendency-breaker before he got his offence back to busting rocks with sledgehammers.

Returning to where they’d left off, Winnipeg’s offence pushed Montreal defenders around and on many occasions, dragged them along for extra yards. Or, as Harris called it afterward, getting back to “being ourselves again.”

It is something the Stampeders’ defence will be ready for, this two-pronged Winnipeg rushing attack, spiced with traps and fakes and misdirections. Design is just one thing to worry about, though. The collected sheer will of Harris, Streveler and their blockers – offensive linemen and very active receivers as well – is something else to battle.

“Sticking to our fundamentals and technique, and really just flyin’

around and gang-tackling and not letting extra yards be a factor in the game,” said Calgary linebacker Nate Holley, obviously aware of the physical challenge the Bombers’ offence will present.

“We’ve gotta tackle well and, hopefully, win the line of scrimmage,” echoed Holley’s head coach, Dave Dickenson, hinting at what should be a big-time brawl on Saturday night, between the Calgary defensive line and Winnipeg’s offensive line.

Dickenson also raised an interesting expectation during a post-practice scrum this week; “I think you’ll see Zach in there a little bit as well,” he said, in reference to Winnipeg’s newly-acquired veteran back-up quarterback, Zach Collaros.

Collaros, out since the first week of the season after suffering an injury that earned Hamilton linebacker Simoni Lawrence a two-game suspension, has been working the kinks out in practice this week. “He’s good to go,” said Winnipeg Head Coach Mike O’Shea. Asked about the prospect of Collaros playing at all in this game he flatly said: “This is Chris Streveler’s team right now.”

And that makes perfect sense. Would a coach push a rusty veteran into the line-up much, if at all, in such a huge, crucial game? You’d have to bet on “no” is the answer to that one, especially with the offence coming off an old-timey kind of steamroller effort just a week ago.

“They were fired up,” said Harris of his up-front blockers in Week 18. “They had a certain edge. It lasted all game.”

Harris knows, though, that as brutal as running against the likes of Henoc Muamba, Antonio Simmons, Woody Baron and Patrick Levels was last week, Calgary is an even tougher wall to try and get through.

The Bombers did a decent job of that, though, during a Week 9 victory over Calgary, picking up 120 yards – 100 of them by Harris – in a 26-24 decision. Middle linebacker Cory Greenwood had twelve tackles for the Stamps in that game, injured subsequently and now residing on the team’s six-game injured list. 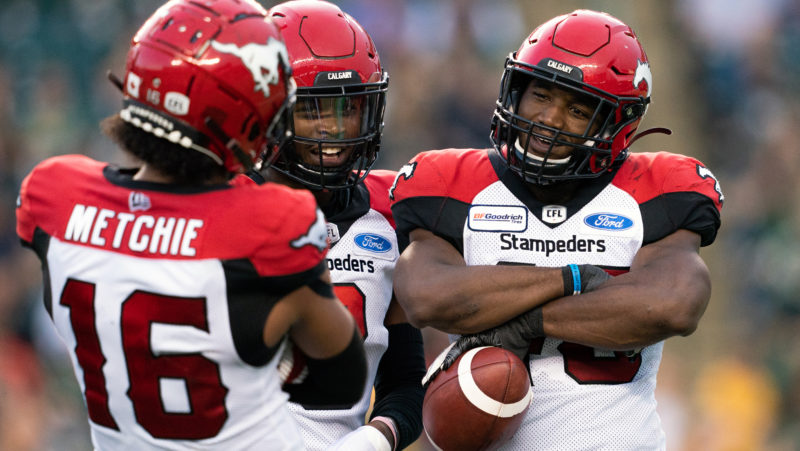 Still, the Calgary run defence is a tough nut to crack.

“It’s gonna be something that’s tough to do, ‘cause they’re a great team. But we got the dogs to do it. Looking forward to gettin’ after it.”

Harris, himself, is snapping the leash, feeling a little more refreshed at this point in the season than a running back normally would, having served a two-game suspension for running afoul of the CFL’s banned substance regulations.

“Having that mid-season break was good for my health,” he said. “I feel like I’m firing on all cylinders right now, and I feel fresh.”