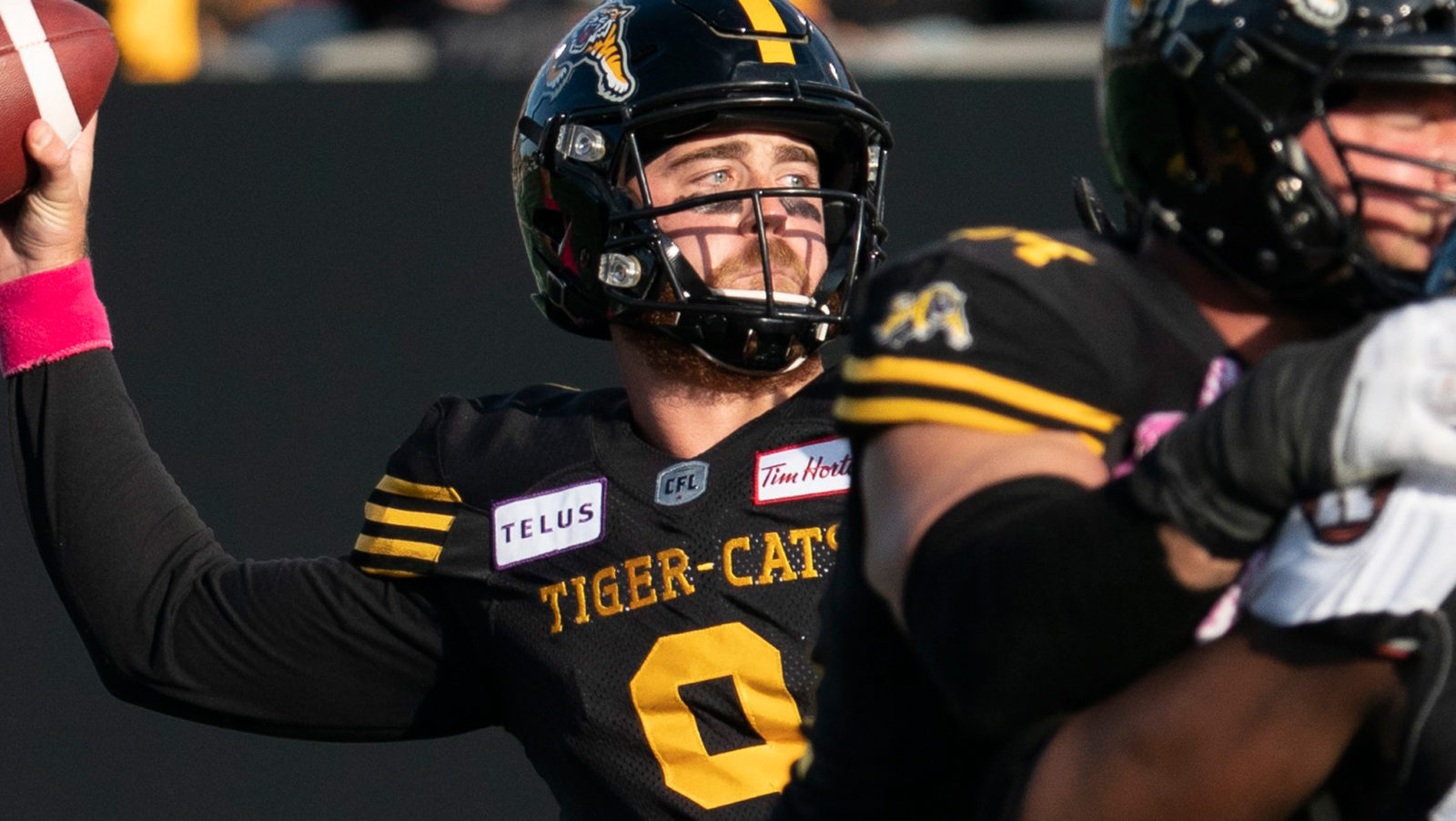 HAMILTON — As Dane Evans continues to put up video game like numbers, the Hamilton Tiger-Cats’ pivot is sharing the credit.

Evans notched his second 400-yard passing game of the season on Saturday, leading the Ticats to a 33-12 win over the visiting Ottawa REDBLACKS. As an offence Hamilton put up 539 yards, while Evans averaged more than 11 yards per attempt for the third time in four outings.

“We can be as good as we want to be,” Evans told TSN after the game. “Ottawa had a good game plan in the first half and we had a lot of missed assignments. Second half we came out and did what we were supposed to do.

“When you’ve got guys like [Brandon Banks] and [Bralon Addison] and [Jaelon Acklin] and all the guys that we have, I’m just playing point guard back there and trying to get them the ball.”

Evans threw for 452 yards on 32-of-41 passing (78%) with one touchdown and one interception. For the Ticats it was their 13th win of the season, setting a new franchise record. It also marked their eighth win in nine contests, while their record at Tim Hortons Field improves to a perfect 8-0.

There have been plenty of reasons to doubt the Tiger-Cats in 2019, from a season-ending injury to quarterback Jeremiah Masoli to a new look coaching staff led by offensive coordinator Tommy Condell and first time head coach Orlondo Steinauer.

Steinauer is considered by many to be the front runner for Coach of the Year for his efforts this season, though Montreal’s Khari Jones, Calgary’s Dave Dickenson and Saskatchewan’s Craig Dickenson have also drawn praise.

“I think it starts from up top,” said wide receiver Brandon Banks, whose 60-yard touchdown reception in the third quarter created some much needed separation. “Coach O, the leader that we’ve got, is one of the best leaders I’ve ever had. He’s leading us in the right direction and getting us ready for every game and getting us focused on the task at hand.”

Banks caught seven of nine targets, leading the game with 116 receiving yards. He paces a talented Ticats’ receiving corps with 1,349 yards — good for second in the league — and is tied for the league lead with 10 touchdowns.

Jalin Marshall also contributed on Saturday, catching four passes for 85 yards while scoring on a five-yard rush. Tyrell Sutton rushed for a game-high 85 yards on 13 carries, adding 64 yards through the air.

Over the last six games, no quarterback in the CFL has been as good as Evans. The 25-year-old sophomore has averaged 371 yards per game dating back to Labour Day, averaging 10.4 yards per attempt while completing 78 per cent of his passes. Over that span he’s thrown 12 touchdown passes and six interceptions.

Many wondered whether the Ticats could win without Masoli after he suffered a season-ending injury on July 26. Since then the Ticats have gone 7-2, and have guaranteed a berth in the Eastern Final on Nov. 17 at home. Evans leaves little reason for skepticism as the playoffs approach.

Bralon Addison, ranked fourth in the league in receiving yards, had three catches for 60 yards, while Acklin added seven catches for 61 yards through the air.

Simoni Lawrence tied a game high with eight tackles, giving him 91 on the season — the most in the CFL and a personal career-high.

Dylan Wynn, Ted Laurent and Connor McGough recorded a sack each. McGough’s, which came on the final play of the game, resulted in a fumble that the Ticats would recover.

Hamilton’s defence held Will Arndt to just 112 yards on 17-of-30 passing in his second career start as the REDBLACKS amassed just 140 yards of offence.

The Ticats are in Montreal on Oct. 26, followed by their season finale on Nov. 2 against the Argos at Tim Hortons Field.