Stamps edge Bombers to move back into first place 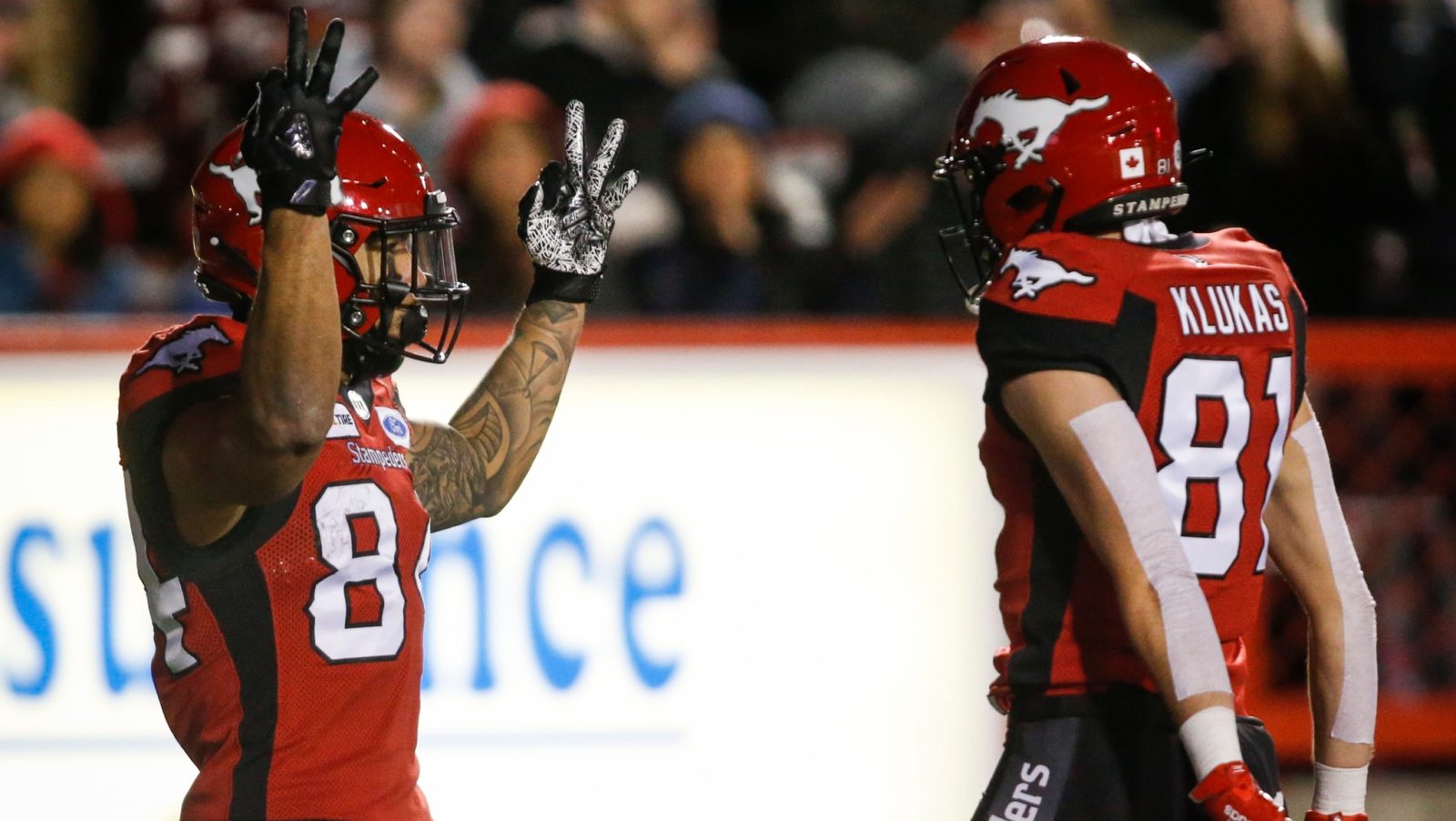 Stamps edge Bombers to move back into first place

CALGARY — A three-touchdown game from Reggie Begelton led the Calgary Stampeders to a 37-33 home win over the Winnipeg Blue Bombers on Saturday night. The Stamps improve to an 11-5 record and are now tied with the Saskatchewan Roughriders for first place in the West.

Calgary took a first-quarter lead on a touchdown pass from Bo Levi Mitchell to Begelton, but Winnipeg grabbed the lead in the second quarter on a scoop-and-score defensive touchdown from Marcus Sayles. Winnipeg’s defence stepped up again on the next drive when Winston Rose’s league-leading ninth interception set up a 25-yard touchdown run from Lucky Whitehead.

Mitchell responded with another touchdown pass to Begelton, but Winnipeg answered back and extended the lead before half-time when Chris Streveler threw a touchdown strike to leading Bombers receiver Kenny Lawler.

Both teams traded field goals to start the second half, and Calgary made it a tie game entering the fourth quarter when Mitchell led a touchdown drive that he followed up with a successful two-point conversion. Calgary took the lead in the fourth quarter when Mitchell threw a third touchdown strike to Begelton, and an interception from DaShaun Amos on the final play of the game ended Winnipeg’s comeback hopes.

Mitchell threw for 337 yards while completing 22 of 33 passes. Josh Huff had a game-high 121 receiving yards on six catches for Calgary.

Calgary struck first in the opening quarter on a 41-yard field goal from Rene Paredes after Mitchell moved the ball into field goal range with a 55-yard bomb to Eric Rogers. But the Bombers responded later in the quarter when an 18-yard run from Nic Demski set up a 32-yard field goal from Justin Medlock.

Mitchell continued his strong start by connecting with rookie receiver Hergy Mayala for a 24-yard gain on the first play of the next drive. Mitchell then threw a deep 42-yard pass to Huff that set the offence up with first-and-goal, and he capped the drive off one play later with a nine-yard touchdown pass to Begelton. Richie Sindani reeled in the two-point conversion pass to give Calgary an 11-3 lead in the first quarter.

The Bombers cut into the lead with a 34-yard field goal from Medlock, and they took the lead on a momentum-shifting defensive play. Sayles stripped the ball from running back Ante Milanovic-Litre before recovering the fumble himself and returning it 24 yards for a touchdown. Medlock added the convert to give Winnipeg a two-point lead.

Winnipeg’s defence notched another turnover on the first play of the following drive, as Rose intercepted a pass from Mitchell that was intended for Milanovic-Litre. The turnover led to a 25-yard touchdown run from Whitehead one play later, and Medlock kicked the extra point to give the Bombers a 20-11 lead.

The Stamps responded with an 11-play, 80-yard scoring drive that saw Mitchell cap it off with a perfectly thrown 21-yard touchdown strike to Begelton against double coverage. Mitchell then completed the ensuing two-point conversion pass to Rogers to make it a one-point game.

But the Bombers came back to extend their lead before half-time, as Streveler threw a 34-yard touchdown strike to Lawler. Medlock’s extra point put Winnipeg up 27-19 at the half.

Calgary’s defence notched a turnover to start the second half when Streveler’s first throw of the third quarter was intercepted by Raheem Wilson. The turnover led to a 32-yard field goal from Paredes that cut Winnipeg’s lead down to five points.

The Bombers responded with a 41-yard field goal from Medlock, but the Stamps made it a two-point game when Mitchell quickly engineered another scoring drive that ended with a three-yard rushing touchdown from Milanovic-Litre. Mitchell then completed a pass to Huff for the two-point conversion, tying the game at 30 points apiece.

Winnipeg took the lead early in the fourth quarter on a 33-yard field goal from Medlock, but the Stamps regained the lead when Mitchell connected with Begelton for their third touchdown of the game. Begelton’s 17-yard score was set up by a 41-yard catch-and-run from Huff, and Paredes kicked the convert to give Calgary a 37-33 lead.

Streveler briefly exited the game with an apparent lower body injury midway through the fourth quarter after being tackled by linebacker Wynton McManis, but he returned later in the quarter.

A roughing the passer penalty against Winnipeg extended a Stamps drive with four minutes to play, and the penalty became even costlier when Calgary was charged a timeout after unsuccessfully challenging the call. But a big sack on second down from defensive tackle Jake Thomas forced a punt and gave the Bombers’ offence another opportunity.

The Stamps came up with a sack of their own to force a turnover on downs with under two minutes, but Winnipeg was given extra life when a 48-yard field goal attempt from Paredes went wide to the left. Whitehead returned the missed kick 36 yards, but the Bombers were unable to complete the comeback as Amos intercepted a Streveler pass in the final seconds.

Both teams will meet again next week when the Winnipeg Blue Bombers host the Calgary Stampeders next Friday at 8:30 p.m. EDT.