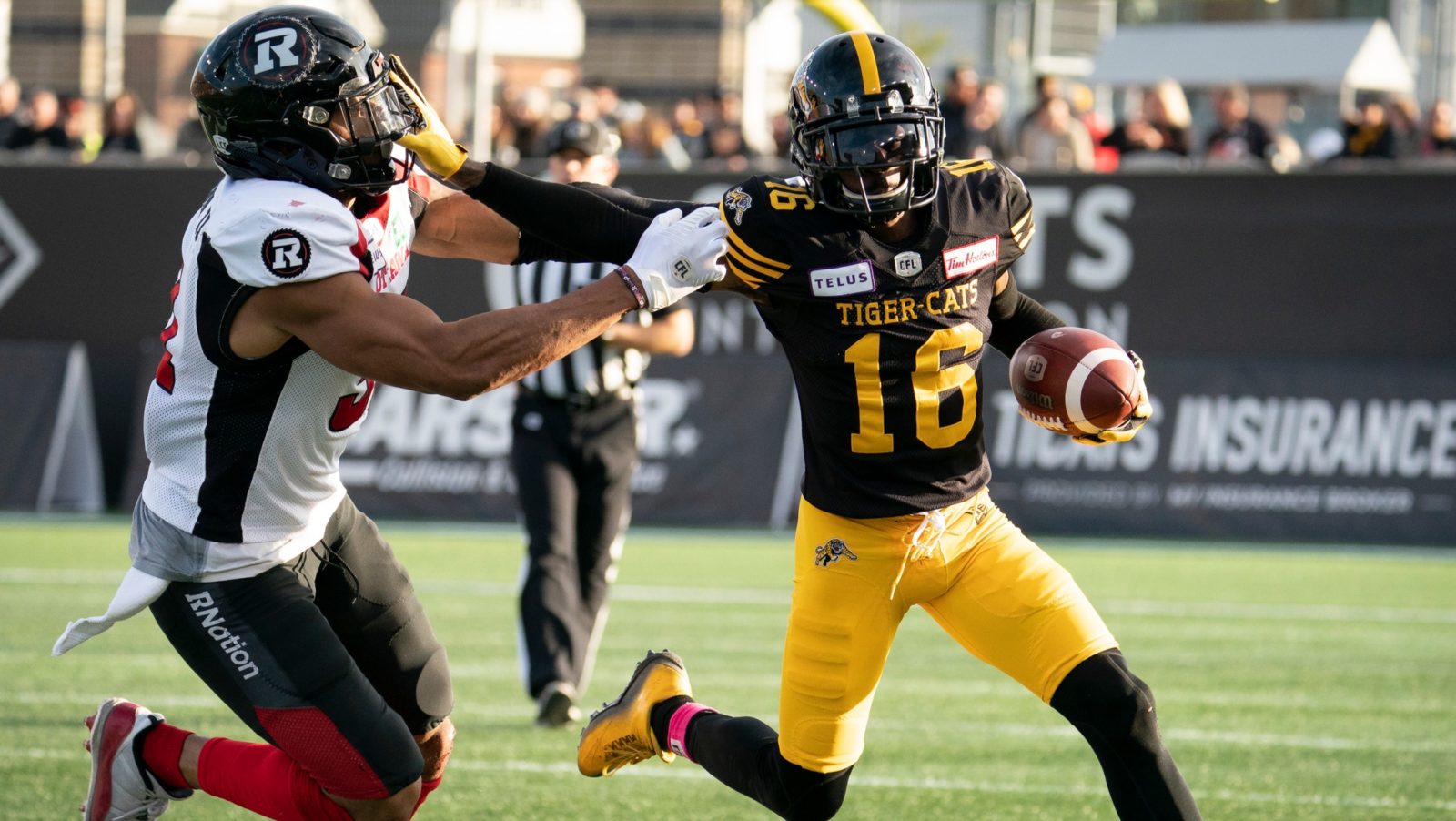 HAMILTON — Dane Evans threw for a career-high 452 yards to help lead the Hamilton Tiger-Cats to a 33-12 home win over the Ottawa REDBLACKS on Saturday. The playoff-bound Tabbies set a franchise record by winning 13 regular season games for the first time in franchise history.

A Jalin Marshall touchdown run was the only major in a first half that saw both teams combine for five field goals. The Ticats entered the second half with a narrow three-point lead, but a short touchdown run from quarterback David Watford midway through the third quarter helped put Hamilton up 19-9.

The REDBLACKS made it a one-possession game with another field goal from Lewis Ward, but the Ticats stormed back to extend their lead near the end of the third when Brandon Banks turned on the jets for a 60-yard catch-and-run touchdown. A 50-yard catch from Marshall set up Lirim Hajrullahu’s third field goal of the game, and Hajrullahu added another field goal with a minute remaining to seal the victory.

Banks finished the game with 116 yards on seven catches, bringing his season total to 1,349 while surpassing 100 regular season receptions for the first time in his career.

Defence dominated much of the opening quarter, and the REDBLACKS notched a turnover when defensive back De’Chavon Hayes picked off Dane Evans for his third interception of the season. But Hamilton’s defence stood strong and forced Ottawa to settle for a 40-yard field goal from Ward to take the early lead.

The Ticats’ offence bounced back from the turnover by responding with a solid drive. Sutton got things started by making a 40-yard over-the-shoulder grab down the middle of the field to convert on second down. Marshall then set the offence up with first-and-goal by gaining 14 yards on a catch-and-run, and he finished the drive off with a five-yard touchdown run. Bralon Addison took the snap in the wildcat formation before handing it off to Marshall for the score.

Hamilton opted to go for the two-point conversion, but Ottawa’s defensive front prevented Sutton from scoring on the short run.

Momentum remained on the Ticats side when they recovered a surprise onside kick on the next play, catching Ottawa off guard. Jumal Rolle recovered the kick for Hamilton, and an 18-yard pass from Evans to Jaelon Acklin brought the ball just outside the red zone. But a costly holding penalty led to a second-and-long scenario, and the Ticats were unable to secure a fresh set of downs. Hajrullahu kicked a 33-yard field goal to give Hamilton a 9-3 lead with 12 minutes to play in the opening half.

The REDBLACKS came up with a big special teams play of their own later in the quarter when Anthony Cioffi broke through to block a Hajrullahu punt. Marco Dubois recovered the ball for Ottawa, and it led to a 27-yard field goal from Ward after Hamilton’s defence shut the door in the red zone.

Ward made a spectacular kick to tie the game up with a minute to go in the half, as he came through with a 56-yard field goal after Stefan Logan helped set it up with a big punt return. But Hamilton quickly regained the lead before half-time. Evans completed back-to-back throws to Banks and Marshall for first down gains, and Hajrullahu made the 38-yard field goal to put the Ticats up 12-9 at the half.

The REDBLACKS appeared to come up with a momentum-shifting interception in the end zone midway through the third quarter, but Sherrod Baltimore’s pick was overturned after a review determined there was pass interference on the play. Hamilton capitalized on the second opportunity with a one-yard touchdown run from Watford on the very next play, and Hajrullahu kicked the convert to give the Ticats a 10-point lead.

Ottawa made it a one-possession game on a 43-yard field goal from Ward, but the Ticats answered back just three plays later. Evans threw a perfect pass over the outstretched arm of defensive back Corey Tindal, and Banks made the over-the-shoulder catch before speeding his way to the end zone for a 60-yard touchdown. Hajrullahu’s extra point gave the Ticats a 26-12 lead entering the fourth quarter.

The Ticats remained aggressive on offence, and Evans stepped up with one of his biggest throws when he connected with Addison for a 48-yard gain. Addison used his speed to beat Cioffi in coverage while setting the offence up inside the 20-yard line. The REDBLACKS stood tall on defence to force a field goal try, but the 18-yard attempt from Hajrullahu went wide to the left and out of bounds for a single point.

Hamilton’s defence forced another punt, and Marshall emerged once again to impact the game with a 50-yard catch to set up a 24-yard field goal from Hajrullahu. The Ticats added a 36-yard field goal with only a minute left on the clock to seal the victory.

Week 20 will see the East-leading Hamilton Tiger-Cats travel to take on the playoff-bound Montreal Alouettes next Saturday at 1:00 p.m. EDT., while the Ottawa REDBLACKS will face the Toronto Argonauts on the road later that day at 4:00 p.m. EDT.