TORONTO — A big performance from a couple of Calgary Stampeders helped SASKRAISED87 to the top of the weekly TSN CFL Fantasy leaderboard.

Running back Ante Milanovic-Litre (14.4 points) and Josh Huff (20.5 points) helped the Stampeders to a win over the Winnipeg Blue Bombers on Saturday night.

Milanovic-Litre rushed 11 times for 40 yards and a touchdown and also added three catches for 14 yards. Huff hauled in six passes for 121 yards and a two-point convert and he also added 27 return yards.

Take a look at the rest of SASKRAISED87’s roster: 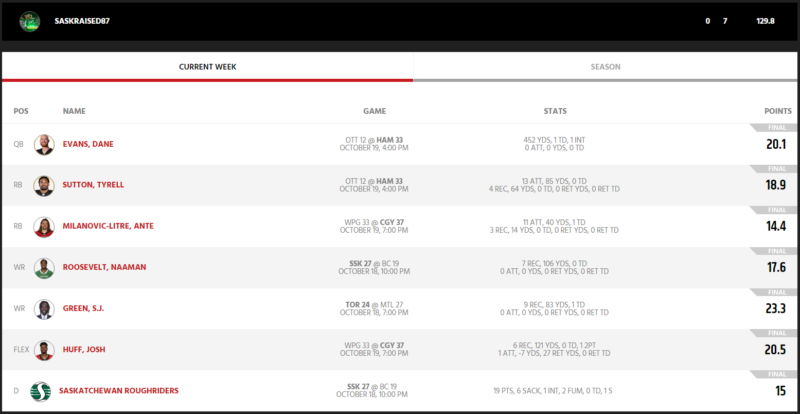 At quarterback, SASKRAISED87 rolled with Ticats pivot Dane Evans (20.1 points). Evans threw for 452 yards, a touchdown and an interception while leading the Ticats to a franchise-record 13th win. SASKRAISED87 went with Tyrell Sutton (18.9 points) at running back. Sutton rushed 13 times for 85 yards and added four catches for 64 yards out of the backfield.

And finally, SASKRAISED87 went with the Saskatchewan Roughriders defence (15 points) that allowed 19 points and collected six sacks, one interception and forced two fumbles.