It went down in Quebec City this weekend.

With the eyes of an entire province focused sharply on the Stade Telus, No. 2 Laval downed No. 5 Montreal 16-3 to reclaim first place in the RSEQ Conference in front of a record crowd of 19,381 fans — including a few familiar CFL faces!

The Rouge et Or (6-1) limited the visiting Carabins (6-2) to 233 yards of offence and a single field goal, and will have definite home-field advantage for the likely Dunsmore Cup conference final rematch in a few weeks’ time.

Elsewhere, a real person named Danny McWhirter was McWonderful for the Carleton Ravens (4-4), who — in no small part due to McWhirter’s three INTs — knocked off Laurier (4-4) on the road to leap frog the Golden Hawks for the final playoff spot in Ontario.

Meanwhile in @USPORTSca 🏈 this morning…

Other results in Ontario set up a pair of tantalizing OUA quarter-final matchups next weekend, with high-scoring Waterloo (4-4) visiting defensive uOttawa (No. 8, 5-3) and the suddenly red-hot Ravens set to face Guelph (No. 6, 6-2).

Mt. Allison (3-4) capitalized on five Bishop’s (4-4) turnovers to sink the Gaiters 35-13; the win was the third in a row for the Mounties, who kept their playoff hopes alive but face undefeated Acadia (No. 7, 7-0) next weekend. Saint Mary’s (3-4) is the other team sniffing around for the third and final playoff berth out east, and the Huskies have a relatively tame matchup (vs. 1-6 St. FX) to end the regular season. 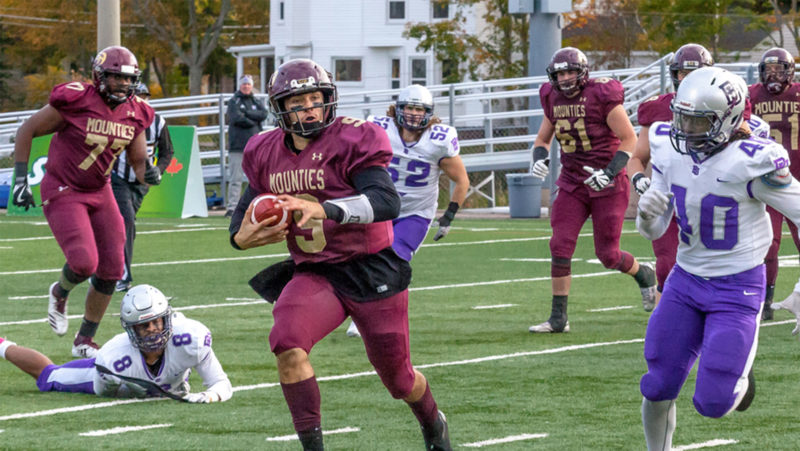 Canada West got crazy as it has multiple times already this season, with Manitoba (4-3) beating No. 4 Calgary (5-2) by a confident 43-29 decision; the Bison led 33-7 at halftime and cruised to victory despite allowing 500-plus yards to the No. 4-ranked Dinos.

In fact, all three lower-seeded teams won in Week 9 out west.

UBC (2-5) edged No. 3 Saskatchewan (4-3) 38-37 on the former’s Senior Day; it’s been a difficult season for HC Blake Nill’s T-Birds, who will miss the playoffs for the first time since 2014, but at the very least they earn a nice win in their last home game of the season. Knocking Saskatchewan — probably over-hyped at No. 3 — down a peg doesn’t hurt the power balance in Can-West either.

Similar to the T-Birds, Regina (2-5) saw their playoff dream extinguished in Week 9 — but not before knocking off Alberta (4-3) on the road. Kudos to the Rams, who could still impact the playoff picture with a win next week at home against Manitoba (4-3).

For the full U SPORTS schedule, standings and news, click here.