Accuracy Grades: Who was on target in Week 19? 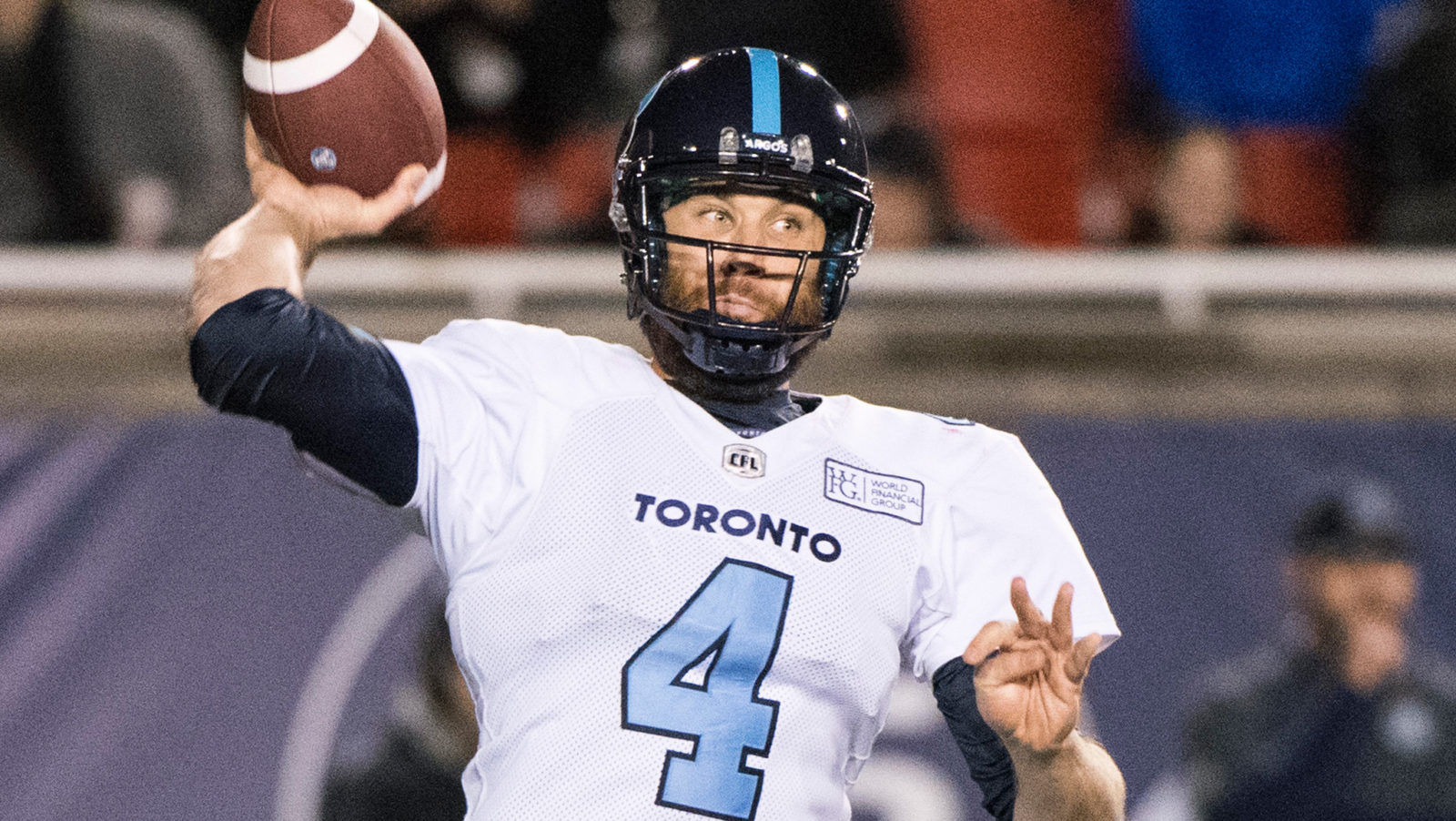 Accuracy Grades: Who was on target in Week 19?

The West is still very much up for grabs, the Ticats and Alouettes have some decisions to make as to who they trust to play in a meaningless matchup Saturday and the crossover game looms large for yet another CFL season.

Before we get to any of that in Week 20 and beyond, it’s time to look back at who was on point in Week 19. 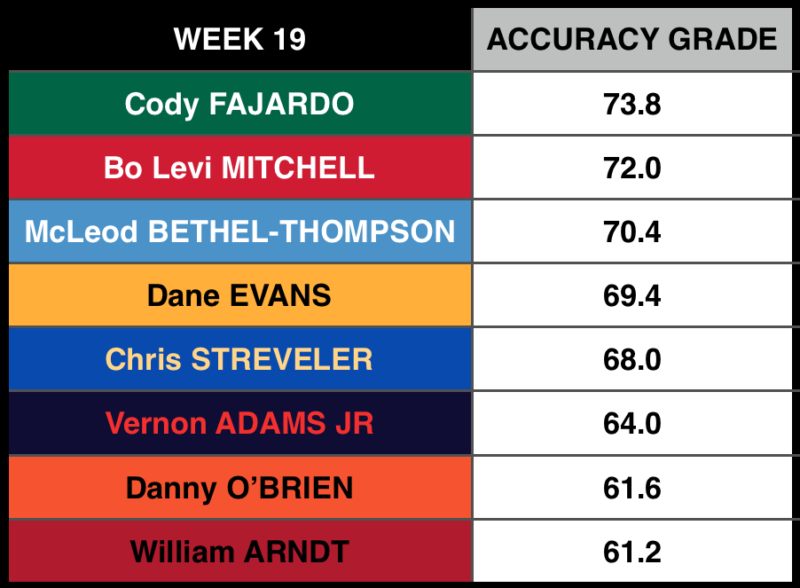 William Arndt brings up the back of the field this week as the REDBACKS offence struggled to get on track in his second consecutive start. Arndt made some great throws, especially on the first drive of the game, but pressure from the Ticats front four and a largely ineffective run game seemed to slow his ability to manoeuvre the pocket comfortably as the afternoon went on.

Danny O’Brien got the first start of his CFL career after bouncing around from Ottawa to Edmonton and now BC and barely out paced Arndt. O’Brien had to come back into the game in emergency duty to relive Week 19 backup Grant Kraemer who replaced O’Brien in the third quarter. Not easy to do and not a good showing from either.

Vernon Adams Jr. backed his way into another win at home against the Argonauts on Friday night as the reigns were securely fastened to the run game and defence down the stretch but VA once again showed he and the Alouettes only need a couple explosive plays to create enough separation to get the win.

Chris Streveler had a much more effective week than of late when the Bombers went to Calgary Saturday night. Winnipeg continues to lean almost what feels exclusively on the run game with the pass just a passing moment of happenstance once every couple of drives. While you might not think Streveler deserves to be rated here his efficiency and on target throws when asked to do so on second down merited the grade.

Just off the podium this week was Dane Evans of the Ticats, who passed for a career-high 452 yards in a win over Ottawa to keep Hamilton undefeated at Tim Hortons Field. Evans made some beautiful throws but also opened it up – especially in the score zone – in a way that allowed for some fun loving, open throttle passing which hurt his grade just enough to drop to fourth in Week 19. 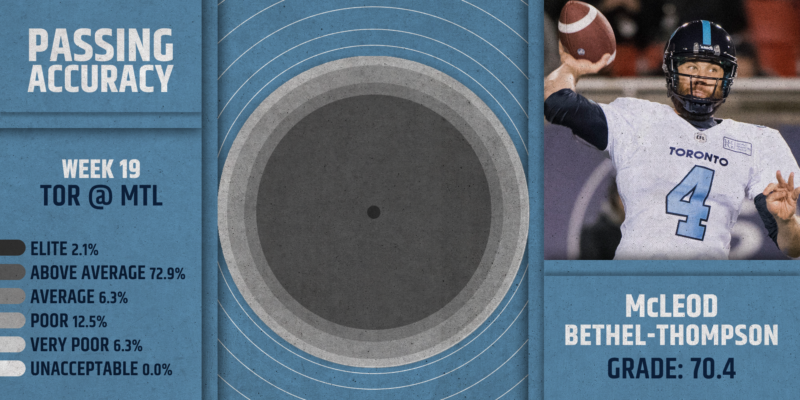 Say what you will about the Argos and their current situation in the standings, but you have to respect McLeod Bethel-Thompson battling through adversity and continuing to drop dimes weekly despite lapses in protection and confusion on route concepts which he is becoming increasingly aggressive at correcting on field. 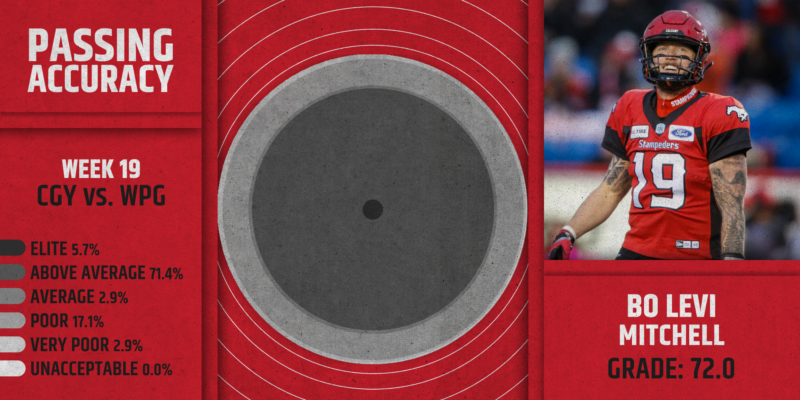 Bo was on fire Friday night, especially through the first quarter. If the Stampeders receivers hold onto the balls they usually catch and even make some unexpected touch catches, Bo might have been on track for a career day. As it is he’ll have to settle for second place in Week 19 but continues to trend upwards in accuracy and a host of other categories as we near the playoffs. 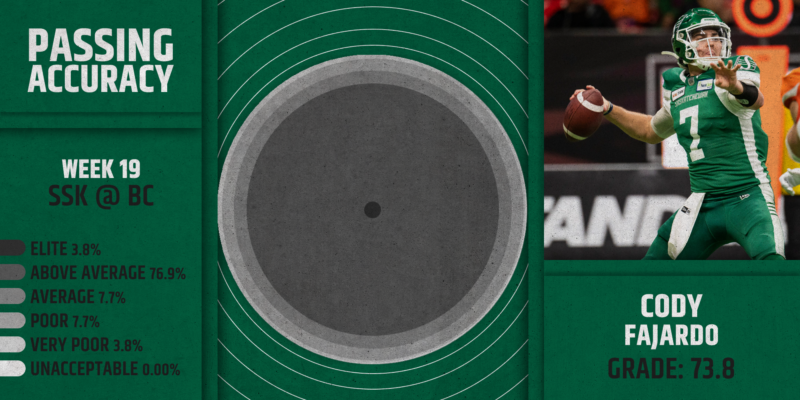 With his new contract extension to stay in Saskatchewan looming in the near future the Regina Disney Prince himself Cody Fajardo played fast, effective and nearly mistake free football against BC on Friday. If the Riders get that type of quarterback play from Fajardo in November they can beat anyone, anywhere in balance with their front seven and a William Powell-led running game.

Now a look at the season-long standings: 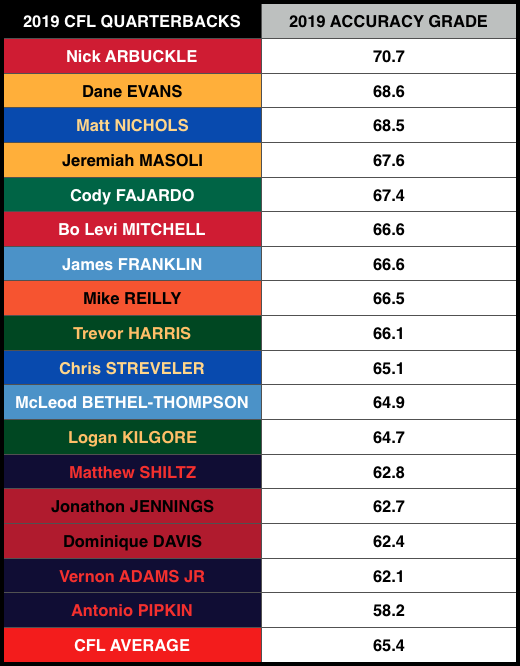 After winning the week Fajardo is now nipping at the heels of injured Jeremiah Masoli for fourth place while Masoli’s teammate Dane Evans leaped over injured Matt Nichols into second place this week.

The biggest rise of the week came from Bo Levi Mitchell who jumped from ninth to sixth on the season bypassing Mike Reilly, James Franklin and Trevor Harris.

Further down McLeod Bethel-Thompson passed Logan Kilgore as the Esks QB goes back to the bench in favour of Trevor Harris – if fully healthy – this week.

Can Evans catch Arbuckle for the 2019 accuracy crown? How far up the standings can Mitchell get before the end of the playoffs? Can Fajardo pass Masoli who he lost to in week one head-to-head in emergency relief duty?

All questions to be answered as we play out the final two weeks of the season.