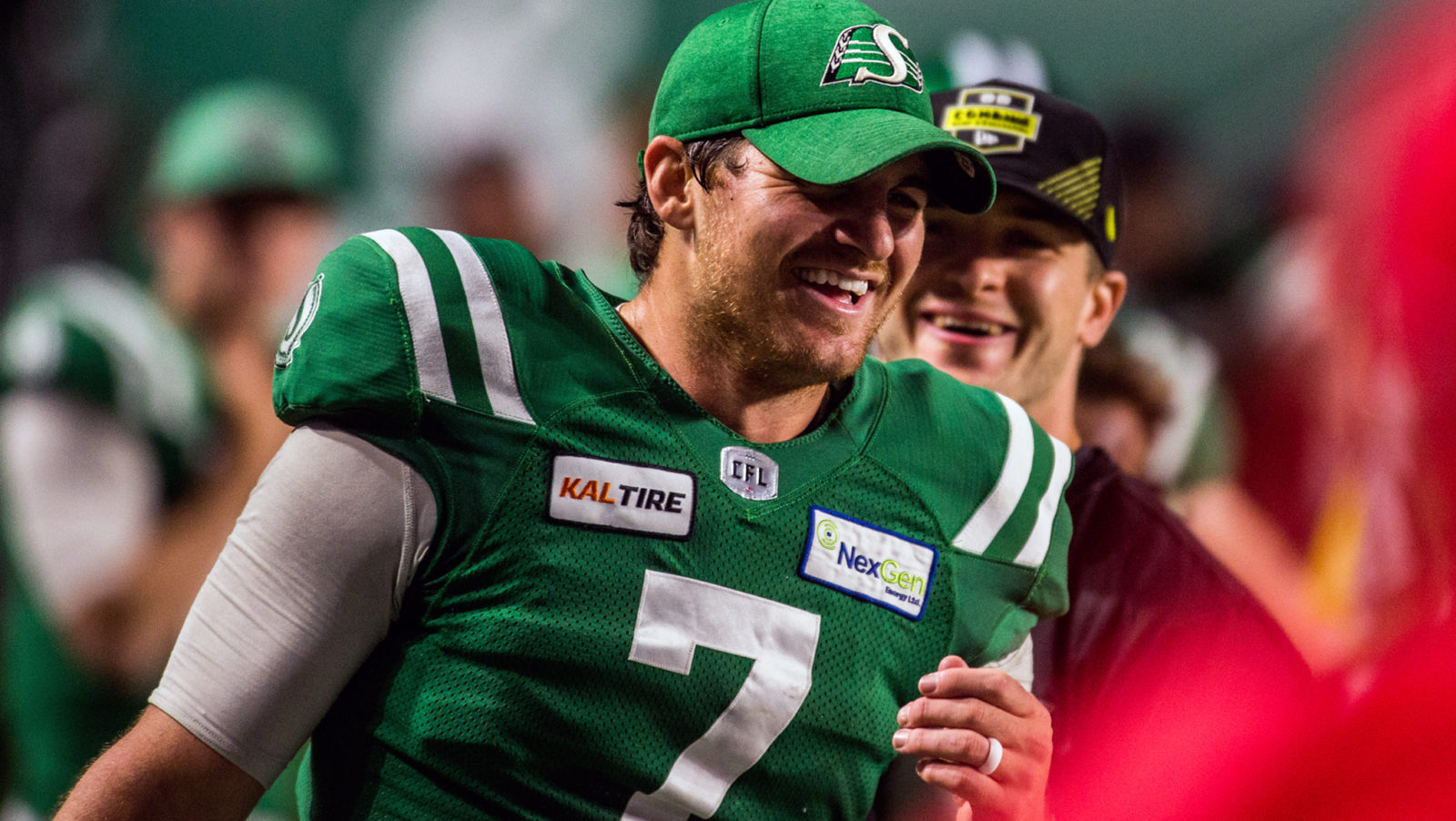 Can The Green Zone predict the future?

Do Jamie Nye and his cohort Wheels, in their (presumably) green booth at CJME in Regina, take breaks from talking sports to will the deepest desires of a football-crazed fan base into existence?

You’re probably thinking this sounds absurd. Such things are impossible, you might say.

You only say that because you haven’t yet heard this:

The timestamp tells you everything you need to know: Posted on Saturday.

Fajardo signed his two-year, career-altering extension with the Riders on Monday.

It’s no coincidence that Nye writes crystal ball stories for us here at CFL.ca.

If you’re a CJME employee or a fan of the Saskatchewan Roughriders, you’re going to want this makeshift band back in the booth, recording its next 30-second single, Fajardo for MOP.

While they pick a song to spoof, let’s take a look at this argument. It’s rare, to be sure, for a first-year starter to win the MOP award, but it’s happened. Travis Lulay did it in BC in 2011, after spending the previous two years as a backup.

That Fajardo spent three years as a third-stringer — last year he was with Lulay in BC, oddly enough — would make an MOP win for the 27-year-old exceptional. With the Riders fighting with Calgary for first place in the West at 11-5 and Fajardo giving his team its best pivot play since Darian Durant wore green, he’s making his case for some end-of-season recognition.

When the Riders travel to Edmonton to face the Esks on Saturday, Fajardo will pass the injured Mike Reilly to take the league lead in passing yards. Fajardo has made 313 of 438 passes for 3,873 yards with 16 touchdowns. What’s most impressive in his stat line is just eight interceptions thrown in 16 games (remember, he replaced an injured Zach Collaros in Week 1 three plays into the season, playing the vast majority of that game). First-year starters are supposed to make mistakes and they’ve occasionally popped up on Fajardo but overall he’s shown a veteran’s poise with the ball this season.

The other area he’s made huge strides in is his rushing ability. Through his two years in Toronto (2016 and 2017), it seemed like he often took the snap and immediately started running. He fell into that in the Riders’ Week 1 loss in Hamilton as well, but quickly adapted once he took the starting job.

This is an interesting year for MOP candidates. Fajardo mentioned how the injuries at quarterback across the league have motivated him to get his new contract done. It also factors into how the MOP will be chosen. Every year, voters often fall back to the familiar names on the successful teams. Those are usually the league’s established quarterbacks. In a normal year, a first-year starter might be deserving, but legacy often clouds the situation. With all nine starting quarterbacks missing time this year, that changes everything. It’s worked in Fajardo’s favour career-wise — once he got on the field and the wins started to stack up, Collaros was out — and it could factor into him taking a run at the 2019 MOP award.

Now, on to more pertinent things. Do the folks at CJME have a song coming that demands the Riders win the Grey Cup this year?

Brandon Banks, Hamilton — If he plays in the Ticats’ final two games of the season, Speedy will more than likely set a career-best in receiving yards, putting him past the 1,423 he had in 2018. The Ticats are enjoying their best ever regular season and despite the depth they’ve shown across the roster this year, they wouldn’t have won the amount of games they have this year without him in the lineup.

Reggie Begelton, Calgary — Begelton sits just behind Banks in receiving yards (he’s third overall, with 1,286 and 10 touchdowns to go with it) and you could make a similar argument to the one above about his importance to his team. The Stamps have been slammed by injuries this year. Begelton has been a constant for his team, establishing himself as one of the best players in the league.

Bryan Burnham, BC — Burnham has had an individually outstanding (a key word in this award) season, but is playing on a non-playoff team. Is he the best receiver in the league? His highlight reel will tell you that (sorry, Shaq Evans). He’s had a career year — 1,401 yards and counting — while his quarterback dodged Mack trucks and struggled to get the ball downfield most of the year, but the Lions have just five wins. We touched on this at the end of September when we looked Vernon Adams Jr. as a possible MOP. Historically, the winner has played on a winning team. Does Burnham know who Jimmy Edwards is? The Ticats’ running back racked up 1,581 rushing yards and was the MOP in 1977. The Ticats went 5-11. It’s the only time that’s happened.

Vernon Adams Jr., Montreal — Perhaps lost in the noise that Hamilton’s record-setting 13th win creates for them is the Als having one of their best seasons this decade. That doesn’t happen without Adams, who, like Fajardo, has emerged as a bonafide starter after years of playing backup and being traded. Adams is fifth in passing (3,674 yards) and has engineered some huge wins for the Alouettes this year, finally dragging the team out of the league’s cellar.

Andrew Harris, Winnipeg — There’s no questioning Harris’ stats. The 32-year-old leads the league in rushing again and his value — imagine if he’d signed elsewhere in 2016 — is unquestioned. We all know the question that will hang over him this year with voters, though. Should someone that failed a drug test win an award, let alone be named the top player in the league?

The most salient point on this matter — and it’s been debated all season — came from CFL.ca’s Jim Morris. “I will take Harris at his word that he didn’t know he was taking anything,” he said in September. “Still, there was stuff in his system that gave him an advantage.”

It’ll be interesting to see what voters across the country think about this one.

Charleston Hughes, Saskatchewan — Hughes said earlier this year that D-linemen never win defensive player of the year. They also never win MOP, but a combination of his excellence and, as was discussed earlier, this being a different kind of season make him a candidate in my books. He’s leading the league in sacks again this year, with 15 going into the Riders’ final two games. He’s four away from a career high, which is completely attainable given how he’s performed this year. It’s not just sacks with Hughes, though. He’s everywhere. He’s forced four fumbles, he’s found the end zone and he could set a career high in tackles, passing the 53 he set as a rookie in Calgary in 2008. Oh, that’s the other thing. Charleston Hughes is 35! He’s leading the league in sacks for the fourth year in a row! He’s a unicorn in a rhinoceros’ body and he should be celebrated for that.