Fantasy Strategy: Plenty of targets for The Great Dane 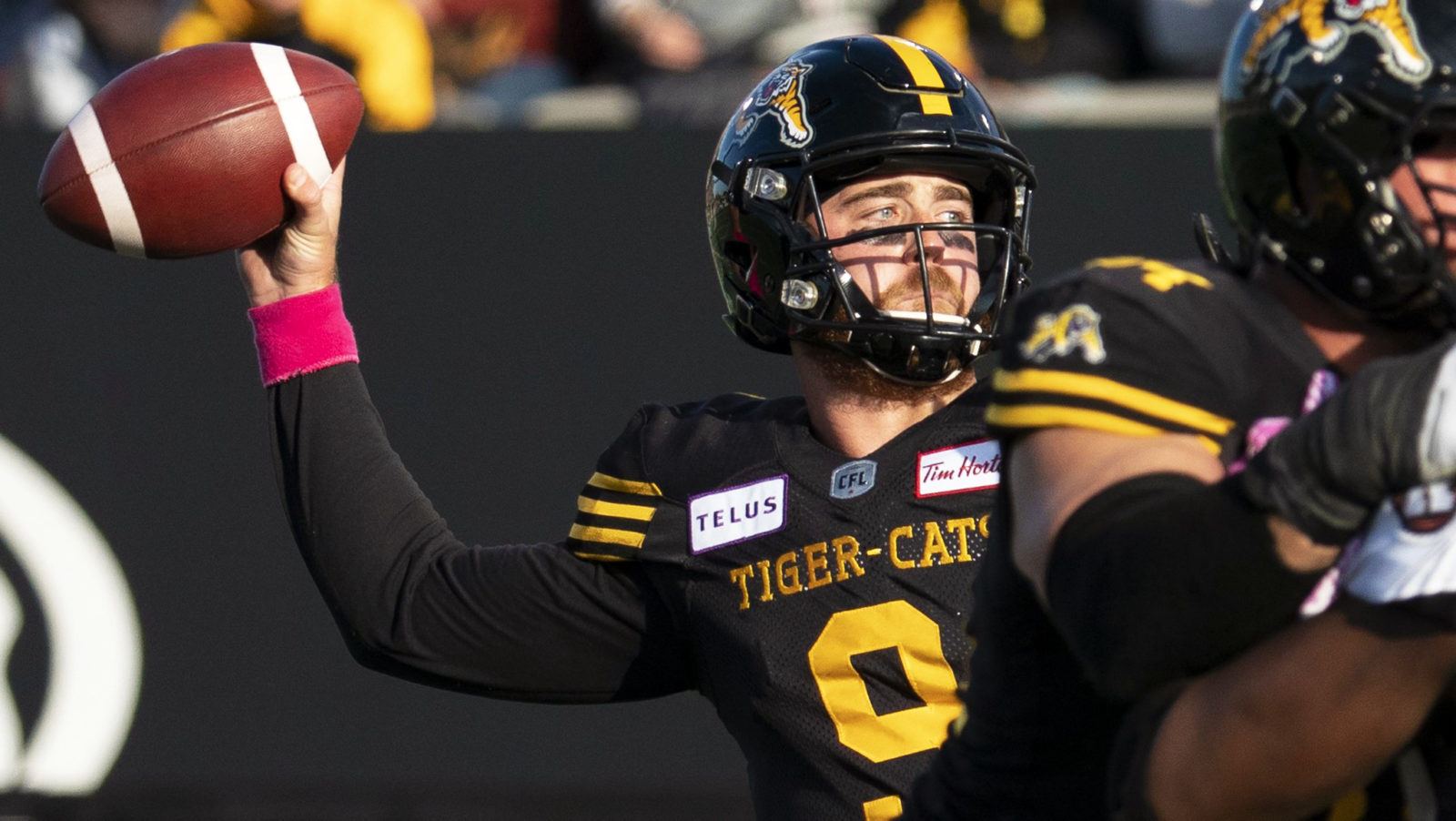 Fantasy Strategy: Plenty of targets for The Great Dane

As the 2019 regular season winds down and playoff matchups are set, there are increased opportunities for some low-priced players to excel down the stretch. There are a number of running backs with mid-tier price tags to build around this week making the oft-employed “studs and duds” approach a less necessary tactic. Fantasy players will have to read to news closely as the week goes on to try to discern how coaches intend to involve their players down the stretch.

In a game with no consequences in the standing, Vernon Adams and the Alouettes offence seemed to struggle to find a rhythm with players coming in and out of the lineup for late-season rest. It wasn’t until the fourth quarter that they really seemed to find some chemistry and salvage his Fantasy production versus the worst defence in the league. His projection for this week is about 30% lower than in Week 19, as the TiCats defence allows the second-fewest yards per pass attempt (7.45) and has allowed just 13 passing TDs all season – lowest in the CFL. More than likely, his path to production would have to come as a runner, but he’s had double-digit points as a rusher only once since Week 11, after accomplishing that feat four times between Weeks 4-10. Add to that the possibility he could be given William Stanback type rest at any point and he’s probably not worthy of consideration at this salary.

Dane Evans also harbours the spectre of late-season rest as Hamilton has locked up first place in the East and won’t play a meaningful game until November 17. A full month is too long to rest without getting rusty, so Evans may well see a full workload again as he did when he passed for over 400 yards versus Ottawa in Week 19. The Montreal pass defence doesn’t provide much more resistance than the Redblacks, as they allow nearly the same yards per pass attempt (8.89) and a similar rate of passing TDs per attempt that project Evans for the second-highest rates on the slate. Given the combination of salary, matchup, and the top receiving duo in the league, Evans is a pretty easy decision to make at QB.

Fresh off signing a two-year extension with the Riders, Fajardo makes his first trip as a starting QB to the City of Champions this weekend in the hopes of locking up a home playoff game for the Green and White. Working in his favour is an offence that is second in the league in yards per pass attempt and his being second amongst all QBs in rushing yards (610) and rushing TDs (10). The Eskimos defence may be one of the stiffest tests he’s faced this season though as they allow the fewest plays per game to opposing offences (50.6), the third-fewest yards per pass attempt (7.5) and have generated the second-most sacks (50). Edmonton has also allowed the fewest rushing TDs this season (7) which is often where Fajardo makes his hay.

No Fantasy player gets excited to play Will Arndt, but at half the salary of most other starting QB and facing a Toronto defence that allows the most yards (9.17) and TDs per pass attempt, he’s a real consideration. He provided nearly 3x value a couple of weeks ago versus Toronto and could certainly better that output this week versus the Argos. It’s not pretty, but with most other QBs priced well over reasonable value thresholds, if there’s a Will, there’s a way.

The Stampeders defence tends to be Andrew Harris’s kryptonite, and his Week 19 13.6 Fantasy point output woefully under-delivered given his salary. A second straight matchup with Calgary makes his over $10K salary that much more difficult to swallow as they allow the second-fewest yards per carry (4.76) and the third-fewest rushing TDs per carry in 2019. If there’s any hope for a bounce back, it’s that the potential injection of Zach Collaros to the starting lineup may force defences to play coverage more earnestly than they did with Streveler under centre. It may also open up more carries for Harris as he averaged just 11.4 carries per game with Streveler at QB (excluding a 24 carry aberration in Week 18), while he averaged 14.2 carries per game with a more traditional pocket passer like Nichols. There’s a chance he’s still the highest scoring RB this week, but at a much higher salary than the competition making him a poor value.

With Stanback being rested after surpassing 1000 yards for the season in Week 19, and speculation that he could be rested again this week from Herb Zurkowsky, Jeremiah Johnson would be set to carry the load for the Als this week. The Hamilton defence, despite its stout reputation, is still an above-average matchup to exploit with opposing RBs. Johnson also routinely receivers 3-4 targets as a receiver out of the backfield, making his sub $6K salary quite reasonable. If Vernon Adams gets rested at some point, the whole offence takes a hit in efficiency with Shiltz under centre, but Johnson is still a solid option.

With CJ Gable expected to miss the game again this week, Shaq Cooper will get his second straight start. In all fairness to Gable, Cooper has been a much more dynamic playmaker at the position for the Eskimos and he along with the return of Trevor Harris may be exactly what the Eskimos need to get things trending in the right direction going into the playoffs. In two starts this season, Cooper has averaged 5.55 yards per carry – more than a full yard per carry higher than the Eskimos team average this season (4.47). He’s also averaged over 24 Fantasy points per game as a starter in 2019. The Riders’ defence allows the third-fewest yards per carry (5.09) and the lowest rate of TDs per carry this season, but the low salary and high ceiling make Shaq an excellent option none the less.

Facing the Alouettes on Saturday morning will be Tyrell Sutton, who has taken the lion’s share of the work out of the backfield for the TiCats over the past month. He’ll still certainly cede some touches to the likes of Banks and Addison, but he’s consistently had 15 touches per game which is fine for a $6K salary. The Als allow the most yards per carry (5.56), and third most TDs per carry this season, so it’s certainly a matchup worth targeting regardless of salary. Sutton’s mid-tier tag only makes him more appealing.

As was the story with Will Arndt, few Fantasy players get excited about starting an Ottawa RB, given they average the second-fewest yards per carry this season (4.5). That being said, John Crockett has averaged over 5.4 yards per carry this season and may return to the starting lineup this week versus an Argos defence that allows 5.4 yards per carry along with the second-highest rate of rushing TDs per carry in the league (20 total). Regardless of whether it’s Crockett or Gillanders getting the call for the Redblacks, their combination of low salary and great matchup will likely make them one of the top rostered plays this week at RB.

Reggie Begelton had a quiet first half versus the Bombers but finished with his second 3+ TD game this season despite having just six targets for the second week in a row. His teammate Eric Rogers has also seen his looks decline over the past month, averaging just 5.7 targets per game since Week 17. Both of them have 100 yard and multi-TD upside versus a declining Bombers secondary, but their declining market share of targets also give them shakier floors than any other point this season. Josh Huff, on the other hand, has leveled out with a similar market share of targets to the big two over the past couple months but comes in at nearly half the salary versus a Winnipeg defence allowing 8.27 yards per target and the most receptions of 30+ yards this season (30).

The purported rotation at QB for the Argos this week adds some risk to the projections for Green, Edwards, and newcomer Worthy, but all are still worthy of consideration versus a REDBLACKS defence that allows the second-most yards (9.01) and third-most TDs per target on the slate, especially given Toronto projects for the second-most offensive snaps this week (58.1). With Derel Walker still a no show at practice this week, Worthy is again one of the more interesting punt options at WR.

The rates for Greg Ellingson, DaVaris Daniels, and Ricky Collins have taken a beating over the past five games with Logan Kilgore at QB, but the return of Trevor Harris this week should be a boon to their production and with salaries that are more reflective of their collective floors than their upsides. If their rates are manually adjusted to pre-Kilgore levels, each of the Eskimos big three receivers projects 2-3 points higher. The matchup with the Riders isn’t one to key in on as they allow below average rates of yards (7.68) and TDs per target but the return of Harris at QB for Edmonton can’t be understated. This is an opportunity to buy low on underpriced talent.

Unlike most team’s top receivers, no Riders pass catcher as averaged over seven targets per game this season. Shaq Evans has the highest upside of the bunch versus an Edmonton defence that allows the second-highest rate of receiving TDs per target on the slate, but he also carries the risk of single-digit Fantasy production as he has done in seven games this season. He’s a fine stacking option if going the Fajardo route at QB, but as a one-off he likely carries far too much risk in Week 20.

With DeVier Posey a likely candidate to be rested this week versus Hamilton, Geno Lewis and Quan Bray may soak up a higher than average share of the targets from Vernon Adams. Neither project as good values though in a matchup with a Hamilton defence allowing the second-fewest yards per target this season (7.45) and a mere 13 total receiving TDs. Dante Absher may get his first start of the season at WR in Posey’s place and may be worth looking at as a pure punt option.

For those going the Will Arndt route at QB, RJ Harris appears to be the best stacking option, while Dominique Rhymes remains a boom or bust option. Harris has compiled 16 targets with Arndt under centre, while Rhymes has just nine. The Argos secondary is certainly worth picking on as they allow the most yards (9.17) and TDs per target in the CFL. The potential return of John Crockett to the Redblacks backfield would only make things easier for this receiving corps.

Most of the defences are pretty drastically overpriced given their contexts this week. Despite their struggles this season, the Argos defence has actually posted double-digit Fantasy point performances in both meetings with Ottawa and is a nice option in Week 20 at the minimum salary. The Redblacks have allowed the third-most sacks this season (42) and given up the most turnovers (48), while Arndt himself has averaged nearly two turnovers per game in limited work. The Argos defence isn’t a good unit, but for Fantasy purposes, they could be the best option this week.

Stacking QB/WR versus the Argos is always a solid strategy and it just so happens that this duos salary combined comes in priced below some starting QBs on their own. Harris’s projection isn’t great, but he certainly has 20 Fantasy point upside.