Berg vs. Ferg: Are the Esks a contender with Harris? 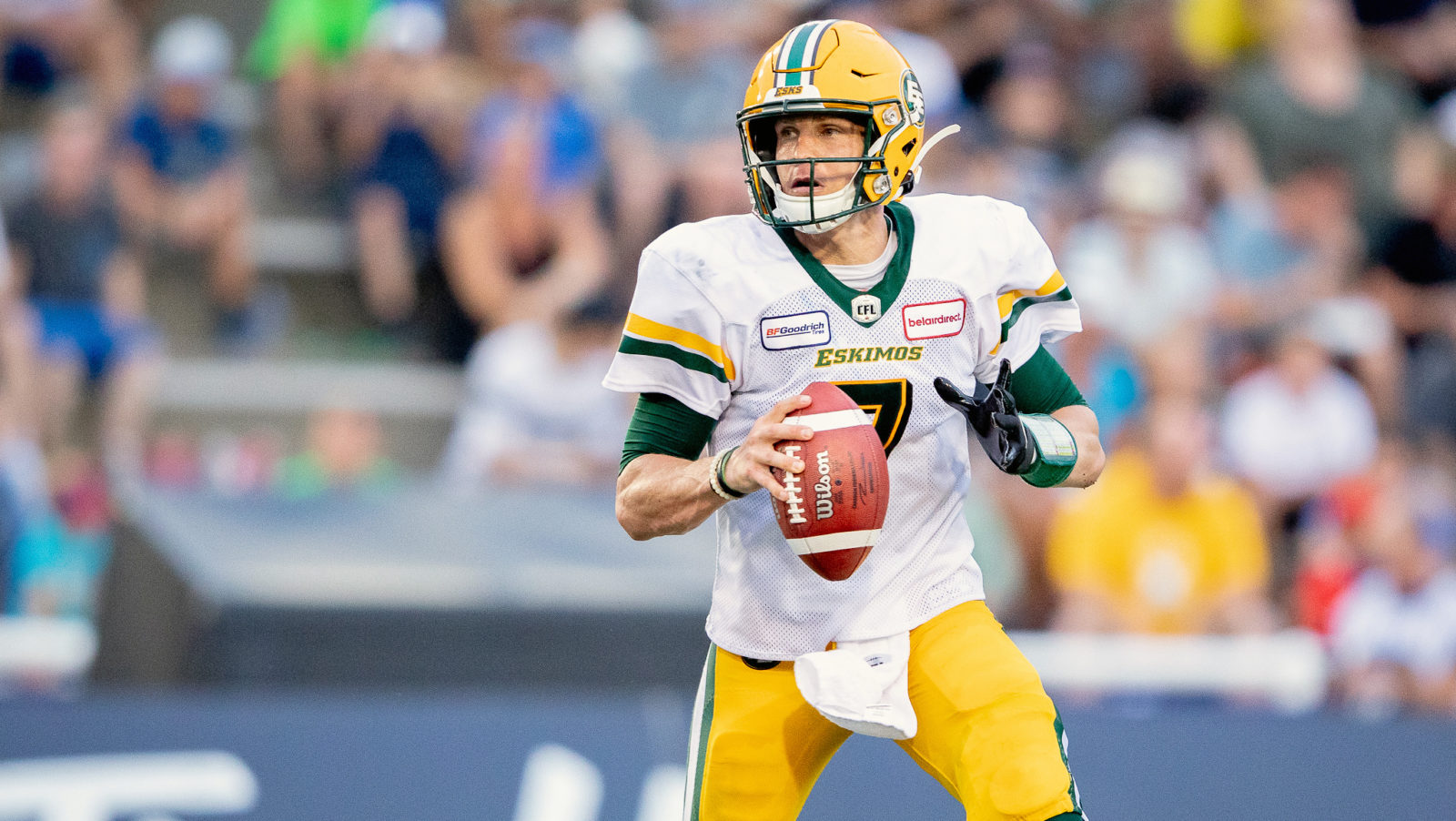 Berg vs. Ferg: Are the Esks a contender with Harris?

Berg vs. Ferg is back for 2019 as columnists Pat Steinberg and Marshall Ferguson debate over some of the league’s most contentious storylines. This week’s question: Does the return of Trevor Harris make the Eskimos a contender?

TORONTO — If you’re the Edmonton Eskimos, the timing couldn’t be better for Trevor Harris to return from injury.

Harris has been out since Sept. 7, when he suffered an upper body injury in the Labour Day rematch against Calgary. But while the Esks have gone 2-2 in Logan Kilgore‘s four starts, the presence of their veteran quarterback has been missed.

Before being injured, Harris was on track for one of the best statistical seasons of his career, averaging more than 300 yards per game while compiling a stellar 15-4 touchdown to interception ratio. The Eskimos, meanwhile, were the top-ranked team on both sides of the ball, pairing a highly-productive offence with a smothering defence.

The path through the East won’t be easy — no team has ever appeared in the Grey Cup via the crossover — but are the Eskimos a contender with Harris at the helm? Steinberg and Ferguson debate in the latest Berg vs. Ferg.

For the better part of this year, I’ve felt the Edmonton Eskimos have possessed more ability than their record has shown. Despite a couple scary weeks, the Esks have accomplished one of their goals: get back to the playoffs after missing in 2018. The post-season road ahead of them is a difficult one; picking up road wins over Montreal and then Hamilton won’t be easy. However, with the return of quarterback Trevor Harris on the horizon, I like their chances a whole lot more.

Edmonton is 2-2 in games Logan Kilgore has started in relief of Harris, including their most recent, which was a crucial win over the BC Lions. While the Eskimos have treaded water with Kilgore at the helm, they’ve also missed Harris in a big way. Getting him back ahead of the Eastern Semi-Final is absolutely huge and puts them on a much more even playing field against a very good Montreal team.

A Harris return gives the Eskimos’ offence an immediate shot in the arm. Before he went down, Edmonton boasted the league’s number one passing offence. The Esks also had one of the CFL’s most formidable three-headed receiving monsters, with Ricky Collins, Greg Ellingson, and DaVaris Daniels all in full swing. Those three haven’t been the same since Harris’s injury, which is why getting their quarterback back in the fold is so crucial in Edmonton.

Getting Harris back will also be a huge help on the other side of the ball. With him running the offence, the Eskimos become a much better ball-control offence with the ability to take big chunks of time off the clock. Extended drives like Harris is able to engineer helps Edmonton’s defence stay off the field and be significantly fresher when it’s their turn. Furthermore, Harris rarely turns the ball over, which helps his defence even more. This season, Harris has thrown a grand total of four interceptions.

The Eskimos still have the league’s number one passing defence. Prior to Harris going down, they also had the league’s top aerial offence. The fact is, even though their record is underwhelming, Edmonton still has a lot of talent just waiting to breakthrough.

Having to beat the Alouettes on the road is a tough ask, but when Harris is healthy, this is a different team. In fact, with Harris under centre, I still talk about the Eskimos in the same breath as the big boys of 2019. A crossover team has never won a pair of playoff games to advance to the Grey Cup, and that’ll be a tall task for Edmonton, too. Knowing the talent assembled, and some of the potential we’ve seen this season, I look at the Eskimos as one of the biggest crossover threats I can remember in a long time.

Trevor Harris gives the Eskimos a lot, but I don’t believe it’s enough to win a crossover matchup.

The main reason doesn’t even have to do with Harris or the Eskimos, it’s the history and the opponent that loom large for me in this situation.

Traveling East for Western opponents has been less successful this season than in recent memory and doing it to play in a playoff environment is even more difficult. Factor in that Edmonton is taking on a Montreal defence playing faster and more physical than any I’ve seen since covering the CFL and a power run game with an opportunistic quarterback and the odds are stacked against Edmonton.

Having Harris back is one thing, but having him back off a throwing arm injury, especially one where hand sensitivity played a large role and asking that rehabilitated hand to catch up to game speed with limited reps becomes increasingly difficult.

The Eskimos could rely on a fearsome pass rush and exceptional linebacker play and find their way in an Eastern Final in Hamilton come November, but at some point they are going to need the best of everyone on board from Trevor Harris to CJ Gable and DaVaris Daniels in order to take down the CFL’s East division and I just don’t see it happening.