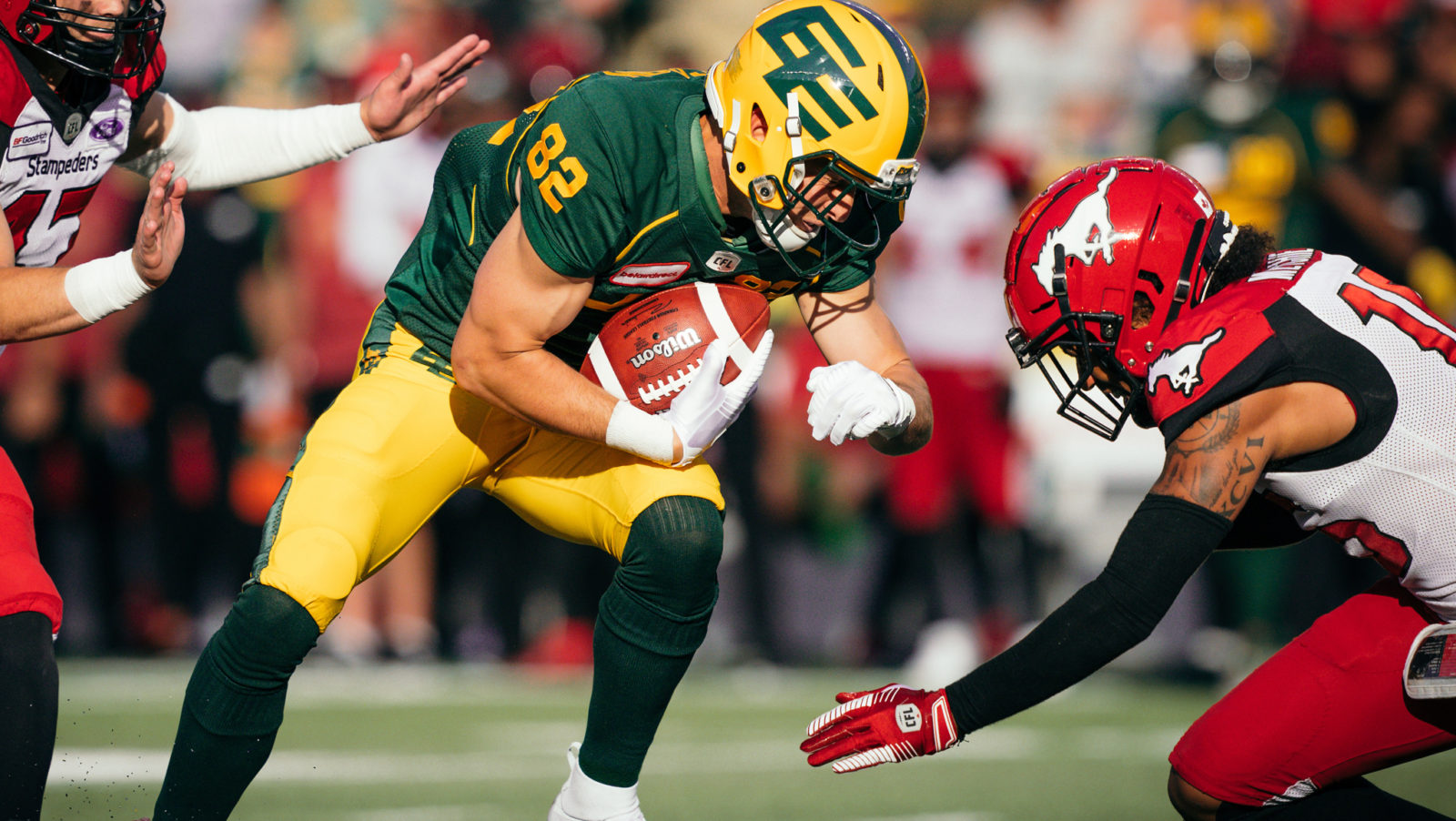 TORONTO — There is no doubting the abilities of Greg Ellingson.

In seven seasons in the CFL, he’s become one of the best pass-catchers that the league has to offer, and after spending six years out East, he’s now plying his craft with the Edmonton Eskimos.

On the latest episode of The Waggle presented by Sport Clips, Ellingson joined Davis Sanchez and Donnovan Bennett to discuss making the move out West, entering a new locker room as a star player, and the return of Trevor Harris.

EPISODE OVERVIEW: As the playoff picture starts to come into focus, who do the guys think is taking the West? And is this finally the year of the crossover? Plus, Greg Ellingson checks in to talk Esks football down the stretch.

“I wouldn’t say I’m a vocal leader. I like to lead by example and show the guys in practice and learn behaviours that I’ve had,” Ellingson said of his style in the locker room. “How I’ve become the player that I have is watching the guys before me, seeing what they do, taking bits of their game, and trying to mould it into mine.

“That’s how I lead: by example. Doing things the right way and outworking people on the practice field and on game day.”

Ellingson began his pro career with the Jacksonville Jaguars, who signed the receiver after he went undrafted in 2011. He was released ahead of that season, and after a short stint with the Tampa Bay Buccaneers a year later, he made his way north.

He’d sign a deal with the Hamilton Tiger-Cats ahead of the 2013 campaign and put up 800 receiving yards on 52 receptions in his first year in the CFL. After a year where he wasn’t utilized as frequently, he’d leave Hamilton and sign with the Ottawa REDBLACKS.

He’d become one of the league’s most dependable receivers during his four years in the nation’s capital, posting over 1,000 yards and 65 catches in each of his seasons with the red and black. In 2017, he finished with a career-high 96 catches, 1,459 yards, and 12 touchdowns while playing in every game that season.

Following the 2018 campaign, the Eskimos landed star pivot Trevor Harris in free agency. They followed up that move by bringing his top target from Ottawa, Ellingson, out West as well. Alongside Ricky Collins Jr. and DaVaris Daniels — not to mention the other members of Edmonton’s receiving corps — Edmonton now possesses one of the most lethal air attacks in the entire league.

After signing his new contract, Ellingson was immediately looked at as one of the stars of the team as well as the leaders. However, the veteran knew he had to earn the respect of the room upon his arrival.

“I knew that coming in, I had to prove myself. That’s the one thing you have to do in professional sports: prove yourself year in and year out,” Ellingson said. “But especially with Edmonton, I felt like I had to come out and produce and be a guy that the team could depend on and the fans could trust and know that I’ll bring the same thing every week.”

He’s been able to prove exactly that, reeling in 86 catches for 1,170 yards and five majors in 16 games. Ellingson became the first player since Geroy Simon (2011) to have five consecutive seasons with 1,000-plus receiving yards.

It’s been an up-and-down season for the Esks. Harris was well on his way to being the league’s MOP through Week 12, as he was on pace to shatter his previous career-high in passing yards while being tied for the league lead in touchdown tosses. In Week 13, he suffered an injury to his throwing arm and found himself on the six-game injured list.

Logan Kilgore helped the team secure its spot in the postseason, but Harris was activated from the six-game ahead of the team’s Week 20 game against the

“You want to make him confident going into the playoffs playing the best he can and he can’t really do that without the guys playing at a high level,” Ellingson said.

Harris said ahead of the start that this was the first time he couldn’t physically push through an injury in his career. The team opted to keep him out against the BC Lions in Week 18. With the team going into the bye, that gave the 33-year-old an extra two weeks to get back to full strength. It was still difficult for the veteran pivot to sit out and watch his team from the sidelines.

“It was tough for him. I could tell throughout the games he wasn’t playing that he wished he was in there and he was doing everything he could to make himself available for each game,” Ellingson said. “It just so happened that he’d throw the ball a little bit and not feel comfortable and not feel like he could give his 100 percent.”

In Harris’ first start back, the Eskimos came up just short, losing to the Saskatchewan Roughriders on a walk-off field goal. They’ll have one more chance at a tuneup before they travel to Percival-Molson Memorial Stadium for the Eastern Semi-Final against the Montreal Alouettes.

They’ll have a good test against the Riders who, despite holding onto a playoff spot, are still fighting for the West Division crown heading into the final game of the 2019 regular season.