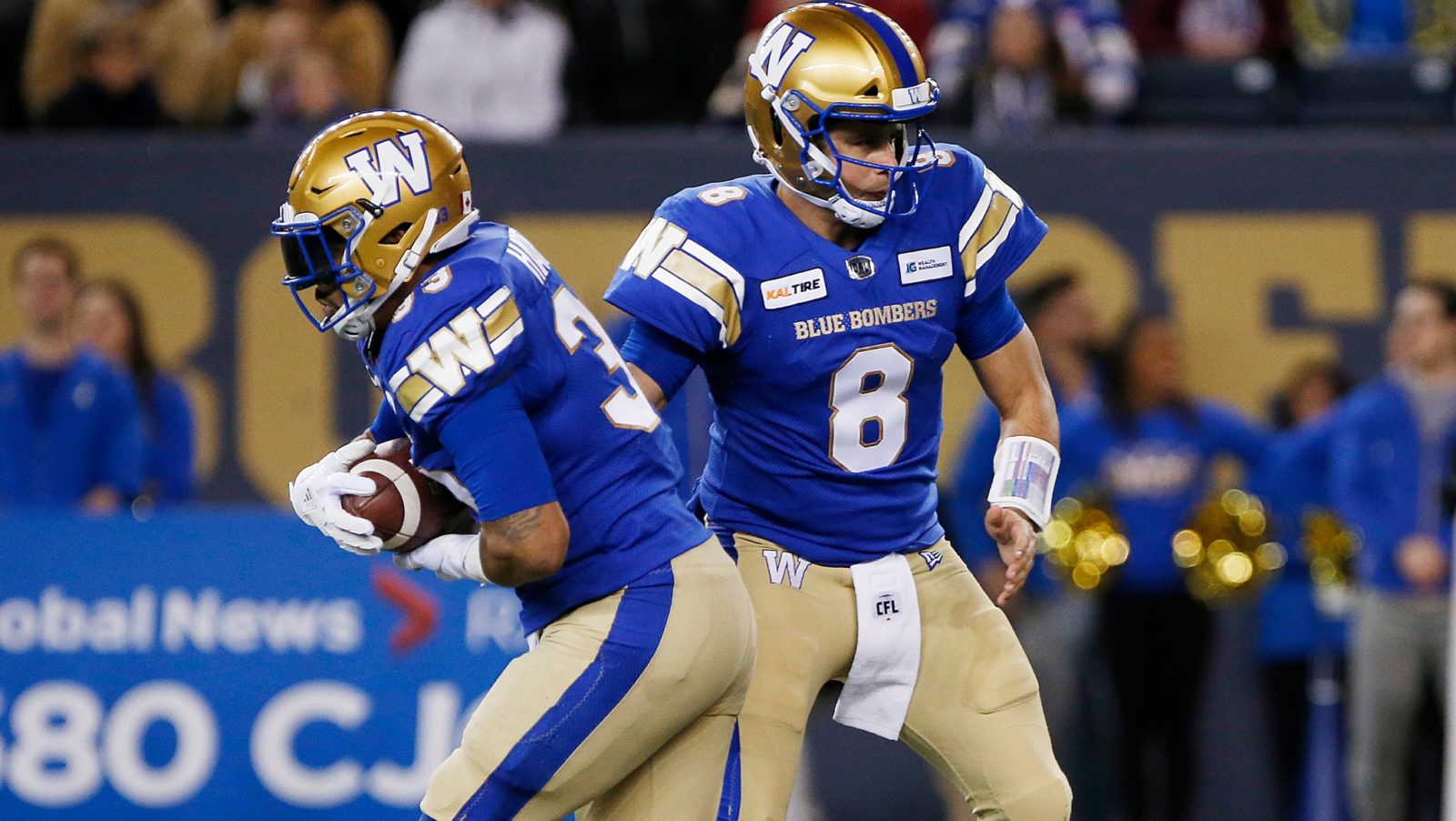 No doubt there were misses and the odd play after which he’d love to have been able to use a ‘mulligan.’ Zach Collaros will readily admit to all of that.

But as debuts go, what the veteran pivot served up for his Winnipeg Blue Bombers in Friday’s dramatic 29-28 victory over the Calgary Stampeders is the stuff that helps craft a local legend.

His numbers were decent – 22 of 28 for 221 yards with touchdown tosses as well as one interception – but there were enough flashes and one magical moment to have many Bomber faithful ready to believe again.

There was the first completion, fired to the wide side to Drew Wolitarsky for an 11-yard gain and a 36-yard toss to Rasheed Bailey that was part of a six-for-six start. There were darts to Nic Demski, nifty touch passes to Andrew Harris, a solid read and strike to Kenny Lawler for a score and then there was some Collaros magic on a throw to Darvin Adams.

(More on that later).

But the scene that seemed to best exemplify the Collaros debut Friday night for yours truly was seeing the veteran quarterback being hoisted up by Jermarcus Hardrick after the Lawler TD. And there was Collaros – his left arm holding on to Hardrick for support and his throwing arm raised in celebration – with a look of pure joy dominating his face.

Asked afterwards if he could have written a better script than what unfolded against the Stamps – including a late drive that set up Justin Medlock’s game-winning field goal as time expired – Collaros was succinct:

“Probably not… for kinda the crazy year it’s been.”

‘Crazy’ doesn’t even begin to describe the kind of year it has been – so far – for Collaros. He started the year as the Saskatchewan Roughriders starting QB but didn’t make it through the first possession of the first game after taking a hit that sidelined him until Friday night. In between, he was twice traded and had the doubters wondering aloud about his future in the game.

We brought that up afterward – whether his performance changes the narrative and proves he’s still got game – and Collaros grinned, then added, “It’s up to the writers to change the narrative, right?”

It was a little while later, during the post-game media conference by Bombers head coach Mike O’Shea, that the same question came up again.

“I think he had fun, which is a very important thing,” began O’Shea. “Even though it’s pro sport and you’re getting paid to do your job, it’s really important these guys had a good time doing it. And he looked like he had a lot of fun out there.

“In terms of the execution, that’s why you want a veteran guy to come in for this scenario – a fourth quarter, last drive to put you in a field goal position to win. You need a vet to do that, so he made good. He also made a bunch of plays off schedule… that ball to Darvin at the back of the end zone off a scramble reminds me of his first year in the league when he’d escape out of things you’d never seen him escape from. So… he’s still got it.”

More on the Bombers win in their regular season finale, which leaves the club at 11-7 heading into their final bye, in our weekly post-game collection of notes and quotes we call ‘UPON FURTHER REVIEW’…

A BRIEF INTERLUDE HERE AS WE DEAL FIRST WITH THE REMAINING PLAYOFF SCENARIOS… following Saskatchewan’s win in Edmonton Saturday night. Simply put, the Bombers need Calgary to lose next week in its game in B.C. against the Lions to play host to the Western Semi-Final. Under that scenario, the Stamps and Bombers would both finish the year 11-7, but Winnipeg would earn second place based on winning the season series 2-1.

Winnipeg Blue Bombers quarterback Zach Collaros heads back to the locker room after a win over the Calgary Stampeders. (The Canadian Press)

AND WE NOW REJOIN UPON FURTHER REVIEW, IN PROGRESS… The work of Collaros and the offence certainly shines a different light on a Bombers offence that had emphasized the run all season and combined with the injury to Matt Nichols, had resulted in the passing attack ranking last in the CFL.

Collaros threw for 221 – and Sean McGuire completed his one attempt to Mike Miller in short-yardage for 14 yards – giving the Bombers slightly more passing yardage (235) than they had averaged all season (210.8).

But given that Collaros had just two full practices with the Bombers’ starting offence and a handful overall makes what he did Friday night that much more impressive.

“It’s real hard to do what he did this week. It’s harder than every other position,” explained Kenny Lawler. “You’ve got to come in and you’ve got to know the plays, but you’ve also got to know what everybody else on the field is doing… all other 11 players.

“And then on a short week he’s got to come in and try to lead us to a win. My hat’s off to Zach. He came in, led the team and we all gravitated towards him. He made some adjustments that he wanted this week and we put in the work this week with some corrections and this is the result – we get the ‘W.’

“All our quarterbacks put in so much work during the year. They’re in here so early. And this is where it pays off.”

Collaros was quick to credit all those around him for their work in the days leading up to the game, a notion that Darvin Adams built upon when he was asked about his quarterback.

“It’s great what he did,” said Adams. “But I also think we have the best O-line in the CFL, the best running back in the CFL. That helps make it easier.

“Look, I’m not downgrading at all what Zach did, because he’s a great quarterback and a great leader. He came in and took control of the huddle and did all the things a quarterback has to do. But there are a lot of good guys in here that helped with his transition. Look at the guys in here… you’ve got Janarion (Grant) over there giving the offence great field position. There’s Nic Demski breaking tackles, Kenny Lawler making first downs, Andrew Harris the best running back, that O-line over there – those guys get us five yards a run. What else could you ask for as a quarterback?”

ALL THAT SAID, THE COLLAROS TO ADAMS TD THROW… has to rank up there as not only one of the Bombers’ plays of the year but certainly one of the best in the CFL this season.

Interestingly, though, it was the description Collaros gave post-game to reporters of that TD that offered a little insight into not only his understanding of the playbook, but his influence in helping tinker with it.

“We made a little adjustment to the play earlier in the week,” said Collaros. “We had Demski run a little double-route there, we wanted the outside guy to replace underneath in case they lifted and they did. I brought my eyes down to the rush and I could have just thrown it to Wolly (Drew Wolitarsky), probably for a really easy touchdown there.

“But I was able to make a play there and saw Darvin throw his hand up there and I just tried to put it in the back of the end zone. He made a heckuva catch keeping his feet in.”

“That one throw to the corner when he scrambled out and threw it to Darvin… that was pretty awesome,” added kicker Justin Medlock, who played with Collaros during their days together in Hamilton. “I was like, ‘Throw it away! Throw it away!’ and then he hit Darvin.

“It was just good to see him out there playing. He’s a great dude and a great teammate and somebody I enjoyed playing with in Hamilton. Hopefully he can help us going into the playoffs.” 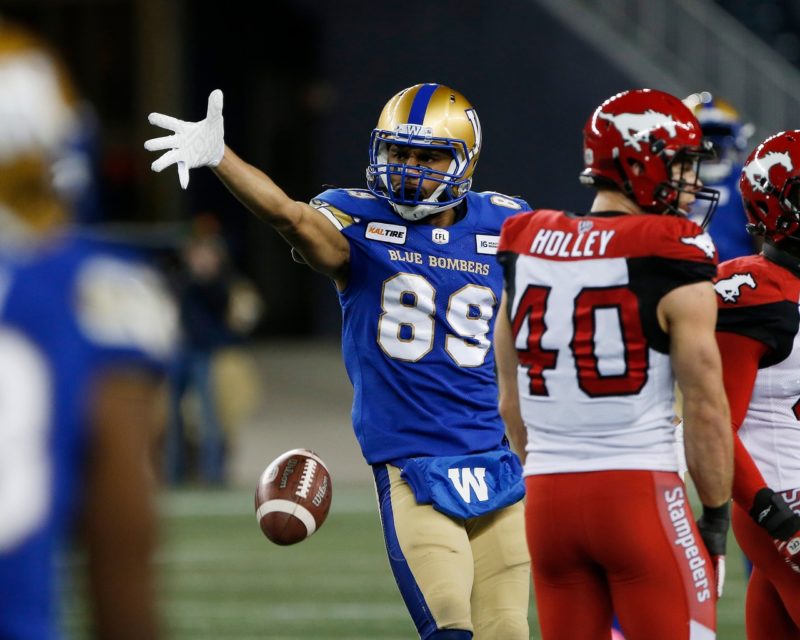 MORE FROM MEDLOCK, WHO SAID POST-GAME… he always wanted to kick a game-winning field goal here in Winnipeg.

But until Friday night, he hadn’t had the opportunity. Asked to offer a take on the kick – Medlock has now hit 12 straight, by the way – he simply praised the offence for moving him closer for the kick and then suggested he was simply doing his job.

But when the conversation turned to the work of Janarion Grant – who returned a missed convert for a critical two points and helped flip the field all night long – Medlock’s eyes lit up.

“I love Janarion,” he said. “I’m always trying to pump him up. I tell him, ‘I want you to be Speedy Banks. I want you to take me to the Grey Cup.’ He has that ability to really change the game. We’ve just got to believe in him and do our job for him. Teams are scared to kick to him. There are good returners out there that I’m scared to kick to, too. But if the guys buy-in and give him a little bit of a window, he’ll take off.”

AND FINALLY, THERE WERE SOME NOTABLE NUMBERS FROM THE WIN THAT ARE WORTHY… of saluting here, including: