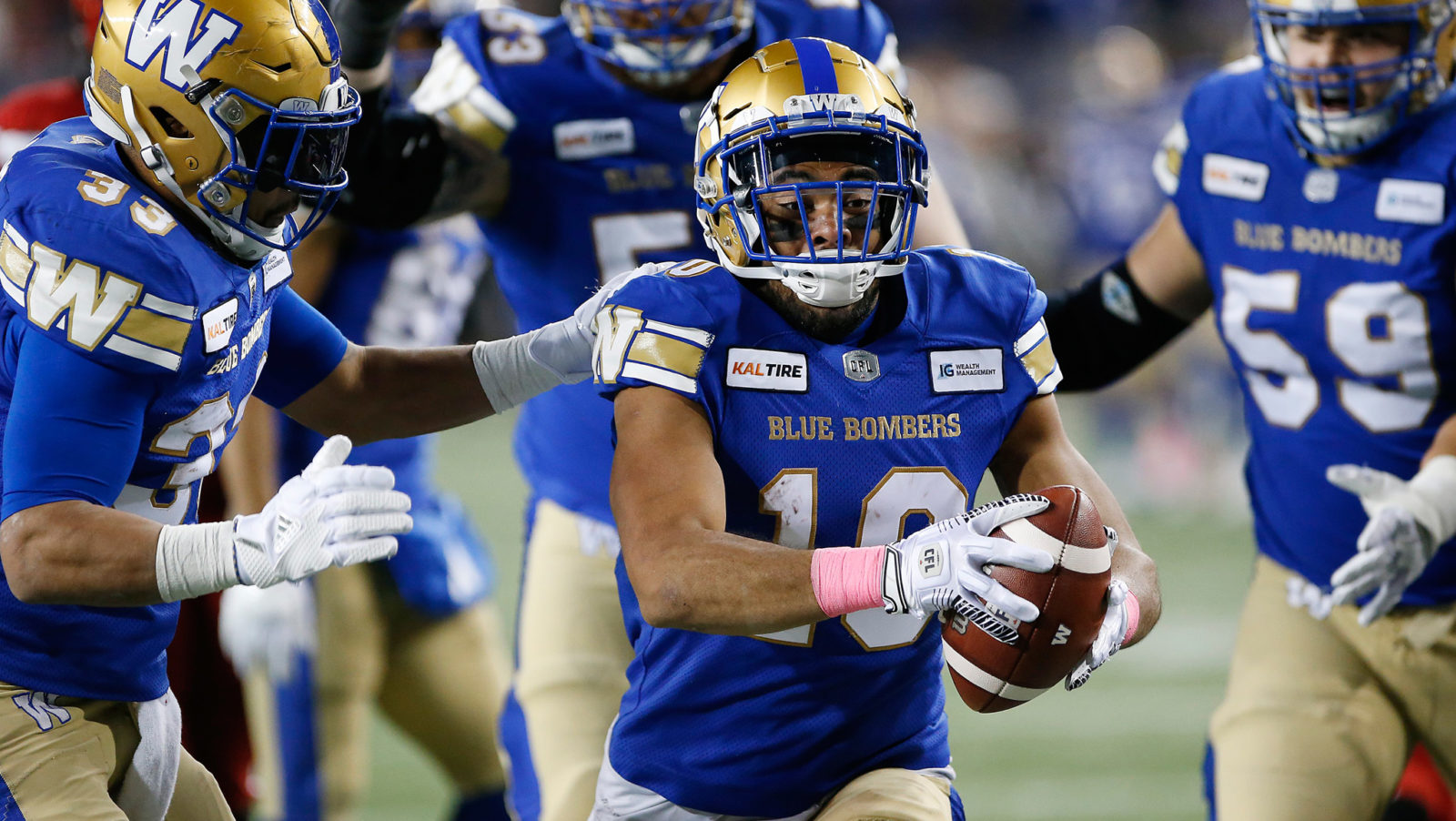 The Winnipeg Blue Bombers are done for the 2019 regular season and they chose an outstanding way to finish. Winnipeg’s 29-28 win over the Calgary Stampeders at IG Field on Friday was exciting but was also important, for two main reasons. The win gave the Bombers hope for hosting a 2019 playoff game. It also opened up another option at quarterback for head coach Mike O’Shea, which makes for an interesting decision over the next couple weeks.

Winnipeg took two of three from the Stamps this season, which gives them the tiebreak if the two teams finish at 11-7 at the end of next weekend. That means the math is simple: the Bombers host the West Division Semifinal with a Calgary loss to BC on Saturday night. While that may be unlikely, it wouldn’t have been possible at all without a Winnipeg win.

That Blue Bombers win wouldn’t have been possible had it not been for the outstanding fourth quarter of Zach Collaros, either. On last week’s CFL Fantasy Podcast, I was skeptical of what we’d see from Collaros in his first start in over four months.

I wasn’t blown away but was pleasantly surprised through the first three quarters or so of his first start with Winnipeg. What I saw from Collaros in the fourth quarter was stellar, though, and opens up a brand new conversation behind closed doors for the Bombers. Mike O’Shea has a decision to make about who starts Winnipeg’s first playoff game, and I know which way I’d go: Collaros.

The Blue Bombers got to see what Collaros was capable of after four months of inactivity, and what he was capable of in their offence. For the most part, Collaros was efficient, effective, and did a good job of limiting mistakes. His performance in the fourth stepped it up a notch, though.

After a Stampeders touchdown as time expired in the third, Winnipeg started the final quarter down 28-19. Engineered by Collaros, the Bombers immediately responded with an 11-play drive that took almost seven minutes off the clock to get back within two points.

Collaros was five-for-five passing and proved what he was still capable on the touchdown strike that punctuated the drive. Under immense pressure from the Stamps’ defensive front, Collaros eluded multiple times and zinged a pass to Darvin Adams in the corner of the end zone. It was high-level stuff and I uttered these words when I saw it live: “yep, I was wrong, this guy can still ball.”

With what he proved on Friday night, starting Collaros in the Western Semi-Final just makes sense. He gives you a far better ability to run a well rounded attack than if Chris Streveler were to get the ball, provided he’s healthy. Streveler is an incredible athlete and does things no other pivots can do in this league, but he also has a long way to go to become a proficient passer. I don’t think that’s a winning formula knowing Winnipeg will have to beat both Calgary and Saskatchewan, perhaps both on the road, to get to the Grey Cup.

Plus, having Streveler as an additional option is a great weapon to have. Streveler could provide a difficult change of pace for opponents in the event Collaros were to struggle in a playoff games. And, the Bombers would also have the option to bring Streveler in for short yardage situations and keep him in for a few plays, the same way they did when Matt Nichols was healthy.

Friday’s win might not be enough for Winnipeg to host a playoff game in 2019, but at least it kept the door open. More importantly, what we saw in Week 20 gave O’Shea much needed options at quarterback. I don’t know what he’s going to choose, but he needed viable options as opposed to just one. With what we saw from Collaros, O’Shea has just that.

Cody Fajardo admitted his brand new contract extension was weighing heavily on him following Saskatchewan’s 27-24 win in Edmonton on Saturday night. Well, good on him, because Fajardo shook that distraction off pretty quickly and put together a great second half to lead the Riders back to another crucial win. In the process, he emphasized what I was already very confident in: locking this guy up at top dollar was absolutely the right call.

It has been a long time since fans in Sask could be confident about who’s starting for them on a weekly basis AND also be optimistic of a long term future with that same guy. Fajardo has changed all that with what has happened this season, and the Riders couldn’t risk not getting him locked up for a few more years.

This breakout season has caught everyone, including the Riders, by surprise. Fajardo entered 2019 behind the aforementioned Collaros on the depth chart and only got his chance after the latter went down on night one. But as a team, you have to adjust, and Saskatchewan did just that. They realized early on they had something in Fajardo and have rewarded him with compensation as a number one in this league. 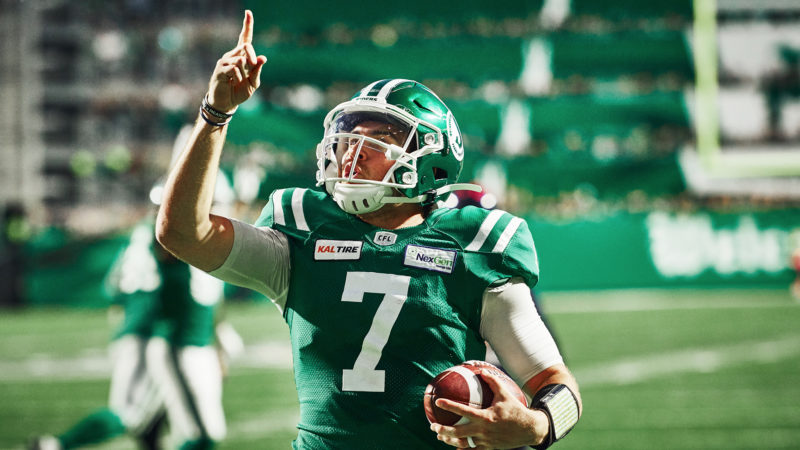 Sure, there are risks involved in allocating big funds to a guy who has yet to complete a full season as a CFL starter. Fajardo has also yet to face the bright lights of the playoffs. That doesn’t mean Saskatchewan shouldn’t have extended him, though.

If they didn’t have options this winter, a team like the Roughriders would have gone in search of a big name (and thus big money) quarterback, so that cap room was going to be taken up anyway. Why not use it on a guy who has thrived in this offence and with this group of receivers?

And it’s not like Sask has won games in spite of Fajardo or relegated their quarterback to a game management role. Fajardo will likely finish the season second or third in attempted passes and has thrown just eight interceptions all season. As of now, that means Fajardo has thrown an interception less than three percent of the time, which is extremely impressive for a first time starter. And don’t let his lower number of passing touchdowns (18) fool you; he’s ran in 10 more, which equates to a much more impressive number of 28.

I don’t know exactly what Fajardo will be in his second year as a starter. What we do know is how well he’s played this year and that the Riders have been in need of a long-term starter for a long, long time. All Fajardo has done is impress in 2019, and it’s good to see him being rewarded.

Let’s see if he can finish the regular season with a bang. Saskatchewan has destiny in their hands heading into the final week of the season. A win or a tie at home to the Eskimos will clinch first place in the West Division.

Saturday was a pretty cool day to be in Regina. The Riders were playing an early game in Edmonton that coincided perfectly with the start of the NHL’s Heritage Classic between the Winnipeg Jets and Calgary Flames. It was a perfect showcase of how great a sports town Saskatchewan’s capital is.

Thousands of Regina locals flocked to Mosaic (blown away by that facility in my first trip) for the hockey game. Those same folks were keenly invested in the Riders as they came back to beat Edmonton and then turned their attention on the Heritage Classic to create a raucous atmosphere. Grey Cup 2020 is going to be insane.

I know the Argos are feeling good about the pair of young quarterbacks they used against Ottawa on Saturday night, which is fine, as Michael O’Connor and Dakota Prukop played well. I just hope that the new Toronto regime allows McLeod Bethel-Thompson to be part of the future quarterback conversation this winter too. Considering the circumstances, Bethel-Thompson played well the majority of the season and deserves to be in the conversation for 2020.

Yes, I know Saturday was another disappointing loss for the Edmonton Eskimos, but all is not negative. The Esks have Trevor Harris back and had some really positive moments in their loss to the Riders. Edmonton knows exactly what their playoff road is, and with Harris back, I’m still not counting them out.