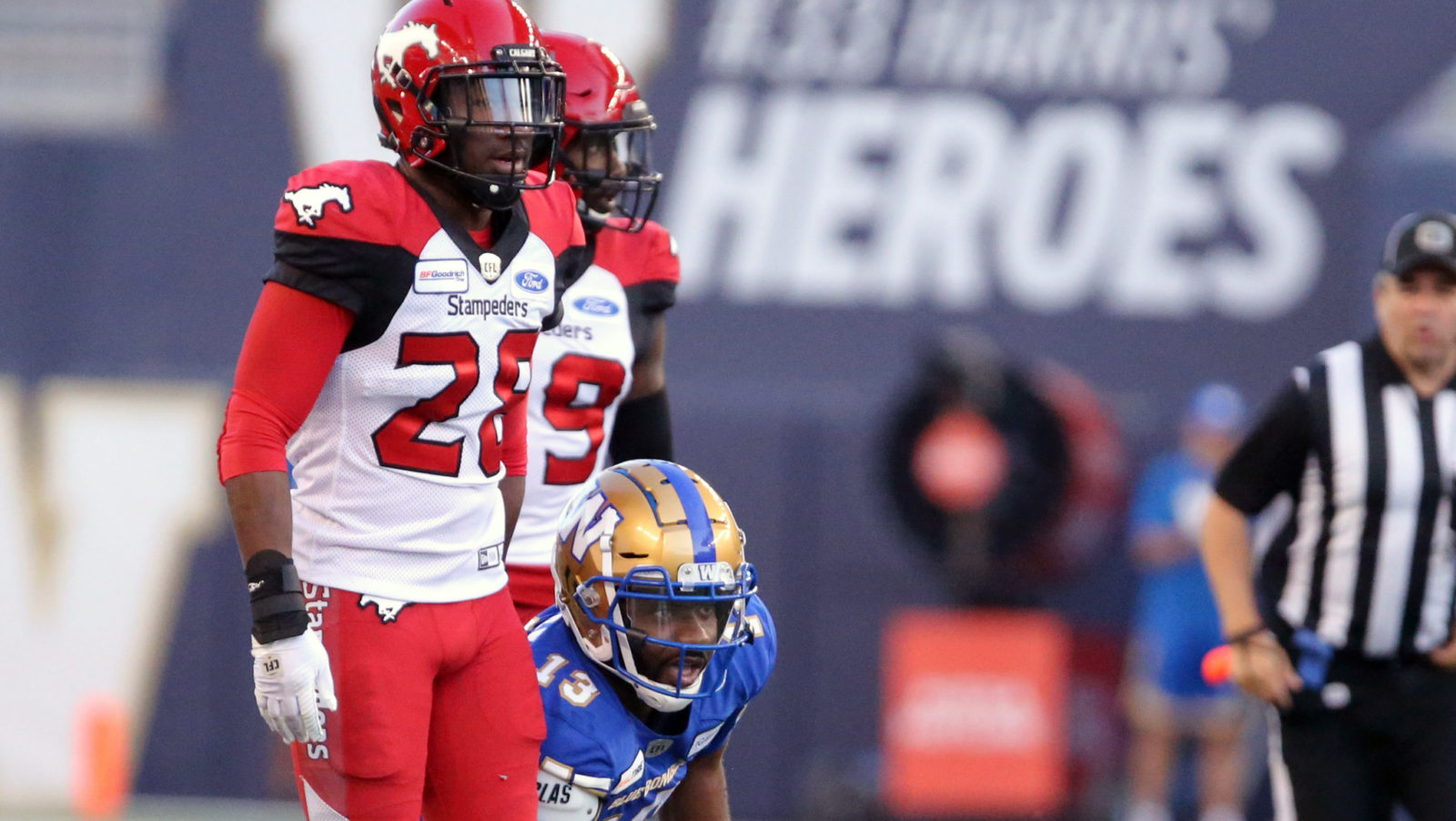 CALGARY — After tying their lowest win total since 2012, the Calgary Stampeders find themselves in a rare semi-final matchup with the Winnipeg Blue Bombers.

Still, counting out such a perennial powerhouse would be a mistake, especially with a team that’s appeared in five of the last seven Grey Cup Championships.

Sunday’s matchup — the third in four weeks between these clubs — offers no shortage of post-season drama. From Andrew Harris‘ career year to Bo Levi Mitchell‘s late-season surge, both teams appear to be heating up at just the right time.

The Stamps may be favoured, but Winnipeg took two of three meetings this season, while quarterback Zach Collaros has won his last three starts against Calgary.

In a rematch of the 2018 Western Final, can the Bombers finally overcome their Kryptonite? CFL.ca breaks down the matchup, position by position. 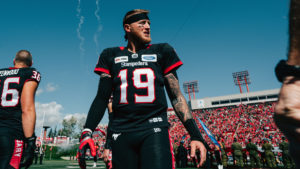 The Bombers could go dual quarterbacks after a strong debut by Zach Collaros, who’s had Calgary’s number of late. Collaros’ steady pocket presence combined with Chris Streveler‘s athleticism could pose problems for the Stampeders’ high-ranking defence. Even so, there’s no question the Stamps have the edge at the position. Reigning MOP Bo Levi Mitchell is justifying a four-year contract extension signed last winter by playing some of the best football of his career. And he’s torched the Bombers in 2019 with 344 yards per game. 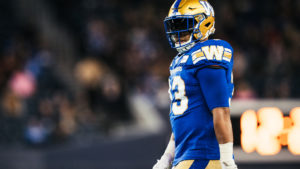 Winnipeg owns a decisive edge in the running game. Andrew Harris piled up nearly 2,000 yards from scrimmage this season, and the 2019 rushing leader is sure to run with purpose after many felt he was snubbed on two major awards. Uncharacteristically, the Stamps just can’t seem to run the football this season. They rank dead in the CFL with 71.3 yards per game. Whether it’s Don Jackson or Ante Litre toting the rock, it’s hard to imagine the Stamps having much success on the ground on Sunday. 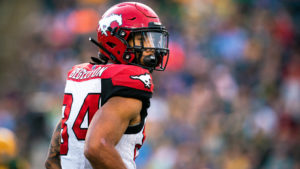 It’s difficult to provide an honest evaluation of Winnipeg’s receivers, as the passing attack has been far too inconsistent — especially since Matt Nichols suffered a season-ending injury. Kenny Lawler and Rasheed Bailey are young up-and-comers, while Darvin Adams is leader of the group. In Calgary, Reggie Begelton and Eric Rogers form arguably the most dominant receiving duo in the CFL. The emergence of a speed threat in Josh Huff, combined with crafty first round pick Hergy Mayala, provides Mitchell a diverse array of weapons. 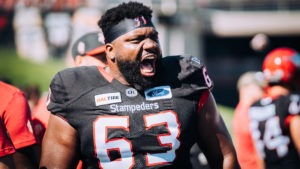 A rebuilt O-line has fared well in Winnipeg, as the Bombers have overcome the off-season losses of Matthias Goossen (retired) and Sukh Chungh (signed with BC). Rookie Drew Desjarlais and Michael Couture have been stalwarts up front, leading the CFL’s top rushing attack at 148 yards per game. The Stamps have struggled to run the ball, but still boast an experienced, well-rounded group. Shane Bergman, Ucambre Williams and Derek Dennis give Mitchell plenty of time to stand in the pocket. In the end, experience wins the day up front. 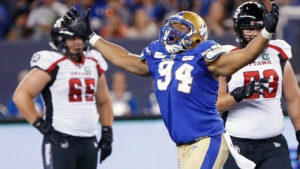 The Bombers are in the midst of an historic season defensively, allowing just 64.2 yards per game on the ground — the lowest total since the Stampeders in 1995. Meanwhile, Jackson Jeffcoat and Willie Jefferson form one of the CFL’s most feared pass rush duos. Despite several changes this season, the Stamps’ D-line isn’t far behind. Cordarro Law returned to double digit sacks, while Mike Rose has become a household name in the middle. These might be two of the best defensive lines in the league. 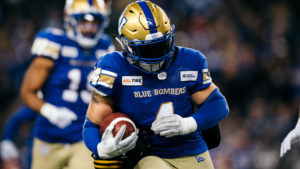 The Stampeders boast a strong group of linebackers that could stack up to most teams in the league. They’ve overcome long-term injury to Cory Greenwood, as Wynton McManis (86 tackles) has thrived in the middle while Nate Holley has been one of the CFL’s best rookies in 2019. For Winnipeg, Kyrie Wilson has emerged as an effective starter, while Adam Bighill — even in a down year statistically — remains one of the league’s most prolific defenders. The Bombers’ success against the run gives them the slight edge. 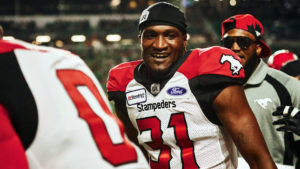 Sure, the Bombers have stifled the run this year, but their secondary is a liability. There are talented players in Winnipeg, including Brandon Alexander, Winston Rose and Marcus Sayles, but this unit has been beat a league-worst 32 times on passes of 30-plus yards. Calgary is allowing 7.2 yards per pass attempt in 2019, a full yard better than Winnipeg’s 8.3-yard average. Even without injured safety Royce Metchie, the Stamps are in good hands with Tre Roberson, Brandon Smith, Jamar Wall, DaShaun Amos and unheralded rookie Raheem Wilson. 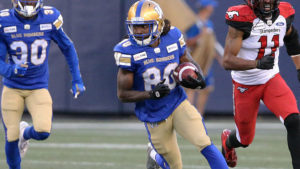 This season has been an anomaly for the Stampeders on special teams, allowing 23 yards per return on kickoffs — the third worst in the CFL. The player that’s haunted them most? Winnipeg returner Janarion Grant. In addition to scoring twice against Calgary on punt returns, 44 per cent of Grant’s total return yards this season have come against the Stamps. While Winnipeg is a plus-seven on big plays on special teams, the Stampeders are a minus-six. It’s a trend to watch out for when these teams match up on Sunday. 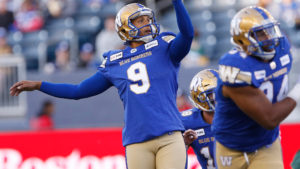 As far as place kickers go, Justin Medlock and Rene Paredes are two of the CFL’s finest. Medlock has held the edge in 2019, making 86 per cent of his kicks despite a league-high 36.1 average distance of attempt. For the Stamps, Paredes’ 82.7 per cent success rate is the third lowest of his career, and while Rob Maver is regarded as one of the CFL’s best directional punters, Medlock has been equally effective, landing opponents inside the 10-yard-line nine times, and putting the ball in the end zone only once, trying a CFL low.