O’Leary: A detailed priority list for each non-playoff team 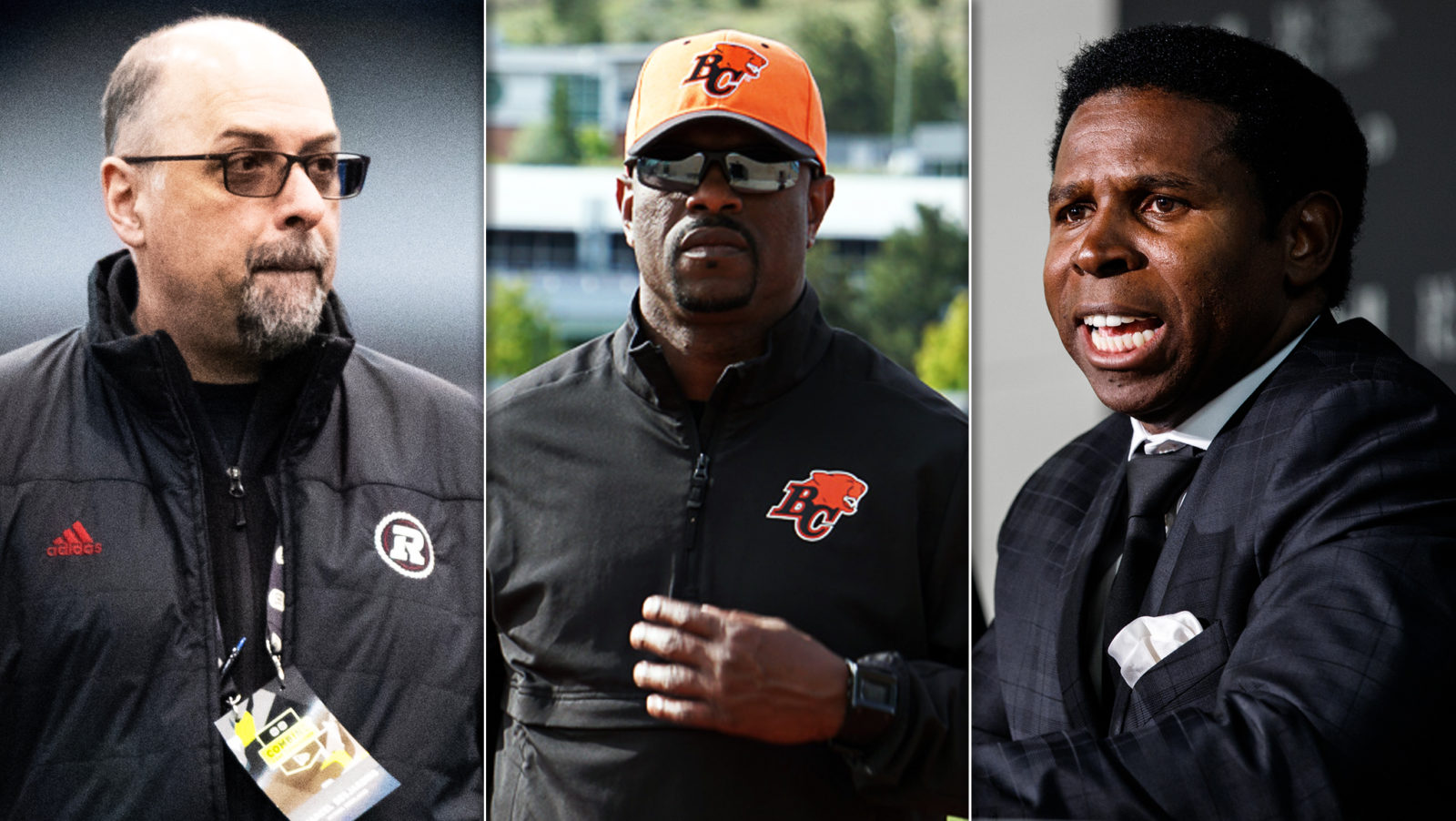 O’Leary: A detailed priority list for each non-playoff team

It took the full 21 weeks of the schedule, but all of the chips have finally fallen in the CFL standings.

The focus is on the six teams that qualified for the playoffs and the intense finish to the West Division standings, but there are three teams left behind that we should take one final look at before we dive in on all-Grey-Cup all-the-time talk.

BC, Ottawa and Toronto have known their fate for the last few weeks and in the cases of the Argos and REDBLACKS, the writing was on the wall for much of the season. With any non-playoff team, change is afoot.

Here’s a look at the three teams that the 2019 season will be leaving behind first.

In the infancy of their offseason, change has already found the REDBLACKS. Coach Rick Campbell announced on Monday morning that he’d be leaving the team. In a very frank but cordial press conference, he said that after spending the last six years working together, he and GM Marcel Desjardins did not see eye-to-eye on the direction that the team should be going in.

Campbell’s departure already has people speculating on where he might land next.

With questions around the head coach role in Toronto, BC and even playoff-bound teams like Edmonton and Winnipeg, there are already a number of hypotheticals surrounding the 48-year-old coach. Regardless of where Campbell goes, Desjardins has a hire to make. Given that he and Campbell came into Ottawa together in 2014, it will be a monumental move for the organization and a fan base that has been spoiled with success in its short existence.

They’d had just one non-playoff season, which came in their two-win inaugural campaign in 2014. This year they started off well, shocking Calgary at McMahon Stadium to open the season and then winning in a shootout at home a week later against Saskatchewan.

Then the wheels fell off. The REDBLACKS lost a franchise-record 11 consecutive games, winning just one of their last 16 games.

Desjardins has one year left on his contract and will have a pressure-filled offseason.

Whomever he hires as his coach, they’ll need to address the team’s two biggest shortcomings this year. First, they need a starting-calibre quarterback. Whether it’s the head coach hire or a separate one, the team needs an offensive coordinator that can build an offence around their QB’s abilities.

Dominique Davis, Jon Jennings and Will Arndt haven’t inspired confidence about being able to provide better play at that spot in 2020. The REDBLACKS should go aggressively into the free-agent market this year for a new pivot, but the market won’t be like it was a year ago, where there were many high-end options. Jeremiah Masoli and Matt Nichols are pending free agents, but both are coming off of season-ending injuries and will likely want to stay with the teams they’ve led into Grey Cup contention.

Nick Arbuckle played well in relief of Bo Levi Mitchell this year and with Vernon Adams Jr. established as the Als’ starter, Matt Shiltz and Antonio Pipkin could in theory be plied away from Montreal.

A solid OC hire — Calgary QB coach Ryan Dinwiddie’s name is already coming up — would go a long way for the entire team, not just the offensive players.

Beyond those two issues, some additions at receiver wouldn’t hurt either. Dominique Rhymes was the team’s only 1,000-yard receiver this year. 2018 Outstanding Canadian Brad Sinopoli languished this year without Trevor Harris, posting his first sub-1,000-yard season in his five years with the team. Receiver production will rest on the shortcomings of the quarterbacks, but the receiving corps seemed to lack the punch it’s had in the past.

The Argos take their first steps into the offseason with the opportunity at a clean slate. Jim Popp was relieved of his GM duties on Oct. 8, replaced by Michael ‘Pinball’ Clemons, along with John Murphy handling player personnel. With the familiar face of the anything-is-possible Clemons at the helm, the Argos will have a slew of decisions to make.

They’ll likely start with the head coach position. Corey Chamblin signed a three-year deal with the Argos when he was hired last year, but there have been rumblings that Clemons may want to bring in his own head coach and staff. You might wonder with the league’s football ops salary cap how that could be possible. With the cap being in its first year, each team was granted a mulligan contract, where firing someone wouldn’t count against that cap. Popp was kept on in an advisory capacity for the remainder of the season, so the mulligan wasn’t used on him. It could be used on Chamblin, if the Argos choose to go in that direction. His assistants were on one-year deals, so they’re also coming off of the MLSE books.

Clemons said on Sunday that Chamblin’s future with the team would be addressed in the offseason.

Clemons and Murphy will put their heads together next on the most important position on the field. There’s only one quarterback under contract with the team right now and that’s Canadian rookie Michael O’Connor, who didn’t see the field until the final two weeks of the season.

McLeod Bethel-Thompson did everything that was asked of him this year, going from backup to starter two times over while James Franklin fizzled in the starting role. Bethel-Thompson showed that he can play in the CFL, being just one of three quarterbacks to crack the 4,000-yard passing mark this year. He’ll have options as a free-agent. Would he want to return to Toronto for his fourth year, or join up with a team that has its sights on a Grey Cup? Every team in the league needed a backup at some point this season. Bethel-Thompson at the very least would be a valuable addition in that regard.

Like the REDBLACKS, if the Argos want to turn to free agency to find their next quarterback, they’ll see a limited market, in Masoli and Nichols, though there was talk of potentially bringing Zach Collaros back to Toronto after he was sent to Winnipeg at the trade deadline. As well as Collaros played in Wininpeg’s win over Calgary two weeks back, it’s a small sample size to make a larger commitment on.

Lastly, the Argos will be in need of a defensive overhaul. Their 562 points allowed is the second-worst total in the league. Run through the defensive stats and you find the Argos at or near the bottom of most categories. Going into Week 20, they’d allowed the second-most net offence (411.7 yards per game), were sixth in sacks (34), tied for last in turnovers forced (29, with Saskatchewan) and eighth in interceptions (14). They couldn’t stop the run, giving up a league-worst 118.6 yards per game. They were only slightly better defending the pass, giving up 308.8 yards per game, good for sixth in the league.

The Argos showed fight at different moments in the season but were ultimately too far off of the mark to make a difference in the weaker of the league’s two divisions. Change should be widespread for this team.

The Lions cannon-balled into the free agency pool over the winter, signing Mike Reilly to an enormous contract and seemingly adding pieces around him — Sukh Chung and Duron Carter — that would launch the team to the top of the West standings.

That clearly didn’t happen. If you thought Reilly’s 2013 season in Edmonton would be the most punishing of his career, you were rudely surprised in 2019. The Lions’ offensive line was the worst in the league this year, allowing 59 sacks heading into their season finale against Calgary. It cost OL coach Bryan Chiu his job at the midpoint of the season and while the o-line play improved somewhat in the second half of the season, it was too late.

The Lions’ lone win in their first 11 games came on a rouge against the Argos, leaving their playoff hopes razor thin at 1-10. While they ran off a four-game win streak to put a semblance of a scare in Edmonton’s crossover bid, their season effectively came to an end in Edmonton when Reilly was hit and broke his left wrist on Oct. 12.

Despite its improved play late in the season, the Lions’ o-line will likely go under the microscope and GM Ed Hervey will look for big, capable bodies to keep his QB safe.

But BC’s problems ran deeper than o-line play. Defensively, the Lions will need to take a step forward. The Lions were essentially a middle of the pack team this year that wasn’t able to get to quarterbacks enough (the Lions finished the season with 58 sacks allowed).

Claybrooks had a difficult debut as a head coach, steering his team through the kinds of waters that he hadn’t seen in his time in the CFL. To his credit, he seemed to keep the team together through the tough times and had them believing in themselves when they finally started to win games.

Change is constant in the coaching ranks, so you wonder first if Claybrooks can survive this season and if he does, what his staff might look like next year. Defensive coordinator and linebackers coach Rich Stubler is a vet of the CFL and Lions’ offensive coordinator Jarious Jackson has spent the past seven years as a coach in the league. The rest of Claybrooks’ staff is younger. QBs coach Drew Tate, running backs coach Nik Lewis, defensive backs coach Ryan Phillips and d-line coach Chris Ellis were all first-year coaches in the CFL. The Lions’ offensive coordinator, Taylor Atilio, was in his first year in that role after three years assisting in Calgary.

Will Claybrooks evaluate his staff and look to have some more experience around him? The Lions are fully capable of rebounding from this dismal year. Remember that the 2013 Esks team that took its lumps through a four-win season came back as a 12-win team in 2014 and was a Grey Cup winner a year later. But if the Lions struggle in the same ways next year, the pressure will ratchet up on both Hervey and Claybrooks. The right moves need to be made here to get the Lions back into the playoffs.