Cauz: Counting down who’s feeling the pressure of Semi-Final Sunday 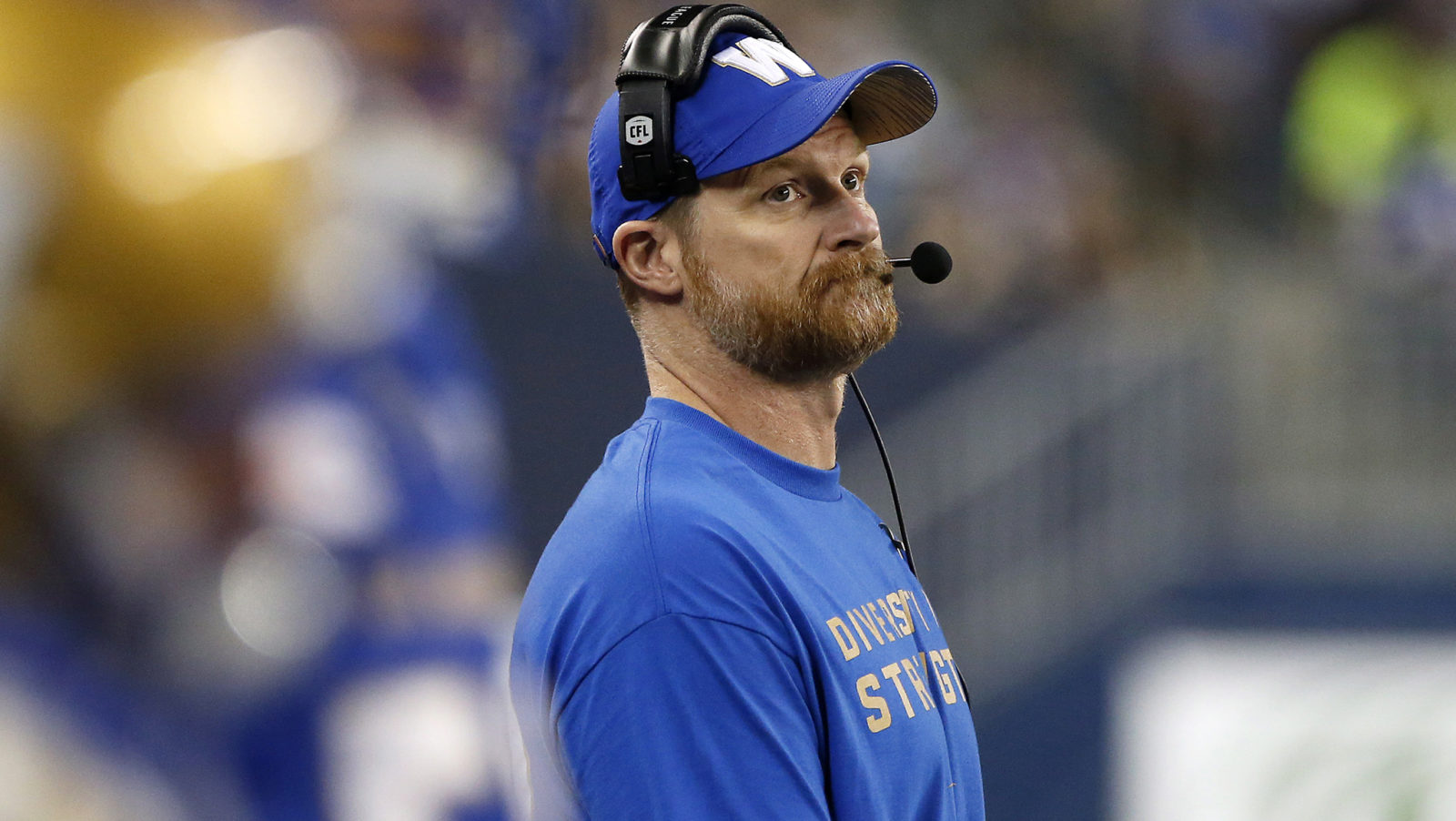 Cauz: Counting down who’s feeling the pressure of Semi-Final Sunday

There are many reasons why people gravitate to the playoffs. The obvious is they culminate in determining just who the “best” team is. But when you dig down just a bit more, what we love so much is the stakes are so much higher. The memories of a Week 7 regular season loss are soon forgotten as the big picture implications are low. Throw an interception to lose a game before Labour Day? Yeah, it stinks, but fans will move on. But that same interception late in a playoff loss can stick with a quarterback for a week, a year or for the rest of their career.

It’s a simple fact that sports fans are attracted to the pressure being ratcheted up come the post-season. And it is the coaches and the quarterbacks who feel the brunt of the heightened expectations. So then the question is, who is feeling it the most for the Eastern and Western Semi-Finals?

CFL.CA’S TOP 30 TO WATCH IN THE GREY CUP PLAYOFFS

With the playoff bracket set, CFL.ca breaks down the top 30 players to watch in the 2019 Grey Cup Playoffs, from Riders breakout quarterback Cody Fajardo to Bombers running back Andrew Harris … READ MORE.

Now, while most writers wouldn’t have the guts to do one giant list, choosing the safer path of two individual lists separating the coaches and the quarterbacks, I am not one of them. Those writers are actual journalists who understand proper sentence structure. I prefer the novelty route to mask the litany of grammar mistakes I usually make. So let’s rank ’em from the least pressure to the ones on the proverbial “hot seat” with a bad performance this weekend.

Did you know that Mitchell has thrown more interceptions (7) than touchdowns (6) in his four Grey Cup appearances? Yeah, that’s all I got in terms of digging up dirt on Mitchell and his post-season career. He’s the defending Grey Cup Champion so the immediate pressure is low, and with two championships and plenty of winning, his legacy is pretty much intact. On top of that, he’s finishing up his first year of a four year contract, so there are no issues with job security. Really the only pressure is that Calgary will ask a great deal out of him as the team finished last in rushing this year.

You find me another coach whose stock has gone up as much as Jones’ has! The Montreal Alouettes have been a hot mess over the past four years with a 21-51 record. This year didn’t project to be anything better with Head Coach Mike Sherman fired before the start of the season, followed by GM Kavis Reed after four games. On top of that, the team had lost their opening day quarterback. It’s hard to win in this league with that sort of organizational chaos, especially when you have suddenly been thrust into role of coach with a week to prepare for the opening game.

Usually the theme of “set up to fail” would follow this story but instead the team hit double digit wins for the first since 2012 and the Alouettes will be hosting their first playoff game in five years. Unless Jones declares he wants Johnny Manziel to start this weekend while going on a public tirade about how overrated Anthony Calvillo is, I think Jones can pretty much write his own ticket after this year. He could go on local radio decrying the quality of the smoked meat at Schwartz’s Deli and Montreal will still want him back.

This one is all about stability. When you work for an organization as smart as the Stampeders, you don’t need to worry about knee jerk reactions dramatically shaking things up. The 2016 Coach of the Year winner is the current Grey Cup Champ and his contract goes through the 2020 season. His regular season record is ridiculous and he managed to help guide Calgary to 11 wins in the ultra-competitive West Division despite losing Alex Singleton, Micah Johnson, Ja’Gared Davis, Ciante Evans and Jameer Thurman in the off-season, and just about every running back to injury at some point this season.

Now we are starting to enter the territory of “feeling some pressure.” You can make the argument that at this point it’s all “found money” for Adams after resurrecting a career that almost seemed over before it even had a chance to begin. After bouncing around the CFL the past three years and getting pushed aside for Manziel, Adams wasn’t even the Alouettes’ starter until an injury to Antonio Pipkin. That last sentence doesn’t exactly make you believe that Adams would put up the best season by a Montreal quarterback since the glory years of Calvillo. That is exactly what the Alouettes got as Adams Jr. has been a revelation this year, throwing for nearly 4,000 yards (a total he wold have gotten if not for being pulled for rest the final couple games) and being the only quarterback to lead his team to wins over both Hamilton and Calgary this year.

Yes, this season has wildly exceeded all expectations. But a poor game against the crossover Eskimos would put a damper on a magical 2019 season. It ain’t fair, but if our last memory of Adams is an ineffective, turnover filled game, then some of the shine of this year will come off.

O’Shea has done nothing but win, with four straight years with at least 10 wins in the West with the rest of the CFL world wondering if his quarterback was “elite” during these past four seasons. He’s as imaginative as any coach in this league and has given the Blue Bombers nothing but stability. The other side is his 1-3 playoff record and the reality that Coach O’Shea isn’t under contract after this season. At some point, to be considered a great coach, don’t you need to get your team to the Grey Cup? Of course you can argue their three playoff losses came at the hands of 2016 Jonathon Jennings (Damn was he good that year!), Mike Reilly and Bo Levi Mitchell. I think the pressure is there for O’Shea on a Winnipeg legacy level, but no matter what he will be a head coach in this league next year if he wants to.

How can there be pressure on a guy who is signed through the 2020 season and routinely puts up massive numbers, averaging 4,500 yards the last three seasons with 68 touchdowns and only 28 interceptions? Harris still needs to prove he is more than a high end game manager who can win your fantasy league. No quarterback plays a safer game than Harris, who ranked last in pass depth, and only Dane Evans had fewer passes of 20-plus yards downfield.

This hasn’t been a banner year for Harris as the Edmonton Eskimos’ best win was a 32-25 Week 1 win over Antonio Pipkin and the Montreal Alouettes. Yes, Harris had six touchdown passes in a 46-27 Eastern Final win over Hamilton in 2018, but that had as much to do with down field blocking and individual moments of greatness from guys like Greg Ellingson and Diontae Spencer. Harris has so much talent, but we are all waiting for that game where he can beat a team downfield with his arm strength and daring.

A win over Calgary would help prove that his heart warming 29-28 win over the Stampeders in Week 20 was not a fluke. It would prove that,  despite all the injuries, Collaros is in fact “back.” Collaros is a free agent at the conclusion of this season and will be looking to prove to Winnipeg that he can be the answer that Matt Nichols never fully was. Even if the Bombers choose to go in a different direction, a strong weekend against a formidable Calgary squad would be a hell of a message to the rest of the league that Collaros is worth the risk. Collaros will have help from the best rushing attack in the game but Winnipeg is thin at receiver with Kenny Lawler ending up first on the Bombers but only 24th overall in yardage. No better way to put a lost regular season behind you than a memorable post-season.

Yes, Maas is under contract for next season, but 2019 marks the second underwhelming year for the Eskimos. Maas has had the luxury of Mike Reilly for 18 games in 2018 and Trevor Harris for 13 games this year, yet Edmonton’s record during that span has been 17-19. There could be plenty of second guessing of resting Harris, Greg Ellingson and Ricky Collins this past week if Edmonton gets off to a slow start against Montreal and can’t come back. I know, it’s not something Coach Maas wants to hear, but his team did lead the league in penalties. A bad loss against Montreal and you can expect real writers and fake ones like me wondering about the future of both Maas and Rick Campbell.

On to the playoffs!