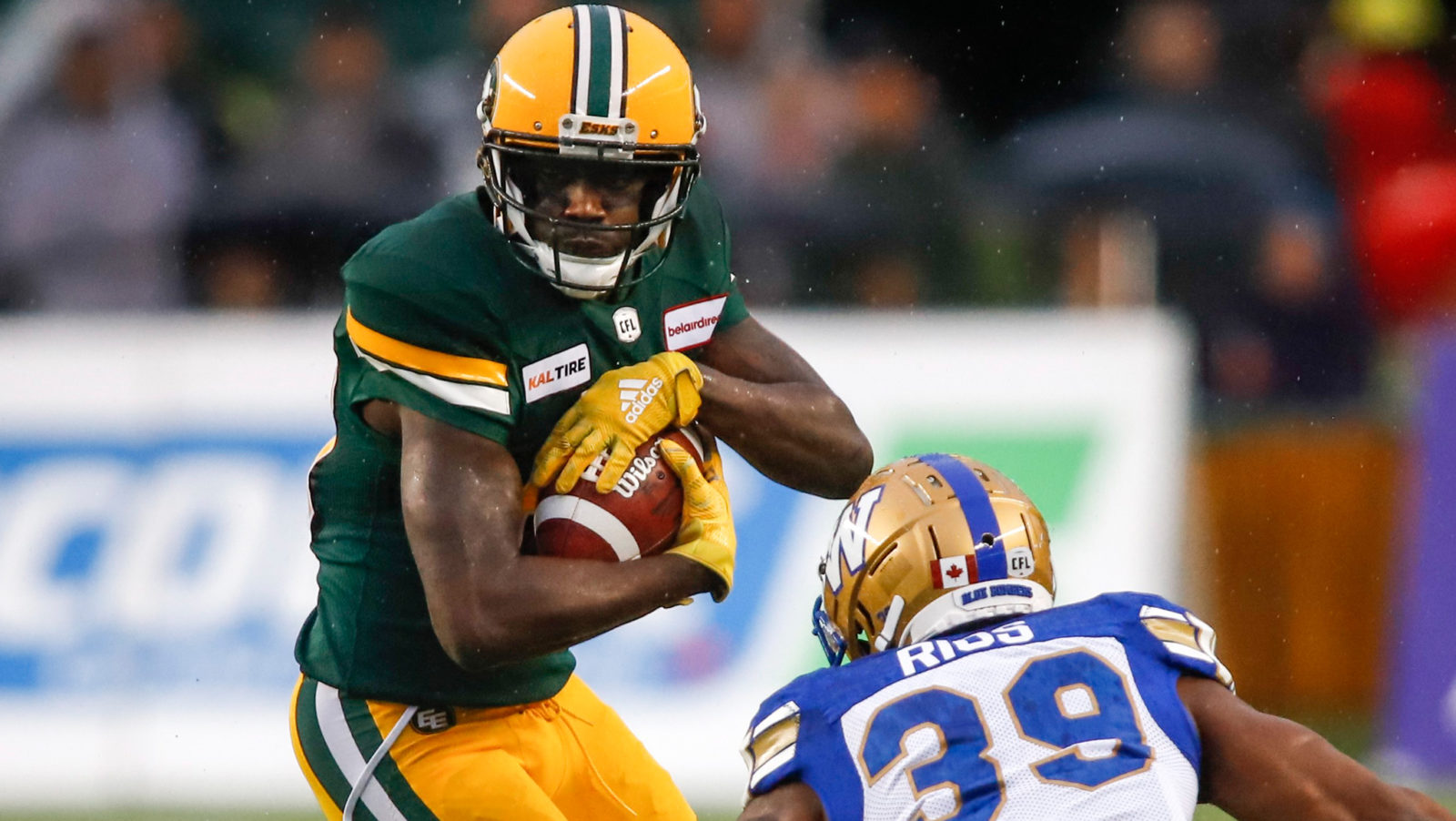 Playoff football is upon us and that brings significant changes for Fantasy football as well. Lineup requirements are smaller with only two games each week (1 QB, 1 RB, 1 WR, 1 Flex, 1 Defence) and the salary cap shrinks to just $30K as well. Fitting in high priced studs is that much more difficult when a $9-10K salary eats up a third of the cap. Playoff football also brings Canadian playoff weather with the forecast high for the West Semi-Final expected to be -16C. There are a lot of variables to take into account when building lineups for the playoff drive to the Grey Cup.

The Montreal Alouettes will host the Edmonton Eskimos in the first game of the weekend, giving Vernon Adams Jr. the first playoff start of his career. After a decade of wandering the quarterback wilderness, the Als appear to have their QB of the future. Adams and the Als offence led the league in terms of passing TDs per attempt this season but will likely see a decrease in volume this week versus an Eskimos defence that allowed the second-fewest plays per game (51.2). Adams projects for 8.26 yards per pass attempt but may be most dangerous with his legs as the Als project for 6.12 yards per carry – the highest on the slate. With an implied team total of 26, Adams should be expected to be a part of a couple of touchdowns.

After missing seven games in the regular season, Mitchell finished the season strong with over 300 yards passing in five of his final seven games including ten TDs in his final four games. The Bombers defence became increasingly porous over the course of the season, allowing the most completions of 30+ yards (32) and the third most total passing TDs (27). The Stampeders ran the second-highest percentage of passing plays this season (66%) and will have to keep that kind of pass-heavy attack going if Mitchell is going to hit his ceiling as the Bombers allowed the fewest plays per game to opposing offences this season (49.4).

Like Mitchell, Trevor Harris missed over a third of the regular season to injury but looks to be at full strength for the East Semi-Final this Sunday in Montreal. The Eskimos offence led by Harris came out of the gates flying versus the Alouettes in Week 1, compiling 447 yards passing and three TDs while Harris added another one himself on the ground. Without Harris in the lineup, however, the team passing rates took a significant hit, so there are good reasons to believe his projection should be even higher this week without straining credulity. Edmonton projects for the most plays from scrimmage this week (58.9) while the Alouettes allowed the third-most yards per pass attempt this season (8.88) – only 0.1 yards per attempt less than Ottawa or Toronto – and the second most passing TDs of any playoff team (25). The Eskimos passing game has certainly struggled over the past two months, but there are a lot of reasons to believe improvement may come this week.

The availability of Chris Streveler is still uncertain heading into the West Semi-Final this week in Calgary. Zach Collaros is expected to start and play regardless, but if Streveler is able to go he may still take red zone package work away from Collaros and severely limit his upside. Despite the fanfare, Collaros still only posted 221 passing yards and two TDs versus Calgary two weeks ago in a game without any loss of opportunity to Streveler. The low salary on Collaros leaves him in the conversation as a Fantasy option, but the Calgary defence allowed the fewest yards per pass attempt this season (7.23) and the second-lowest rate of passing TDs per attempt so it’s not a matchup that is attractive to pick on.

Andrew Harris leads the running back projections, as per usual, due to his involvement in the offensive scheme whether they are playing from ahead or from behind. However, in three games versus the Stampeders this season, he has averaged just 15.8 Fantasy points per game and hasn’t scored a single TD. In fact, Harris has just two total TDs since returning from suspension in week 15 and has averaged only 16.9 Fantasy points per game over that span. Add to that that the Stampeders allowed the second-fewest yards per carry this season (4.64) and it becomes pretty difficult to justify spending nearly a third of the salary cap on him this week.

Like his quarterback Trevor Harris, Gable missed significant time down the stretch but looks to return to action for the playoffs. The Eskimos were the second least efficient rushing offence this season, racking up just 4.5 yards per carry as a team. Gable was slightly better at 4.9 yards per carry but that still made him the least efficient ball carrier of any back in the top 10 of rushing yards this season. Thankfully for him, the Eskimos project for the most plays from scrimmage this week (58.9) and face the second most generous rush defence in the league in terms of yards per carry (5.39) and TDs per carry. The biggest risk for Gable is if the team attempts to keep the explosive Shaq Cooper involved in the offence, thus limiting Gable’s opportunities.

Edmonton’s opponents also expect to have their regular starting running back in the lineup for the East Semi-Final as William Stanback returned to action in Week 21 versus Ottawa. Current projections are for a 75/25 workload split between Stanback and Jeremiah Johnson, but if Johnson were to stay on the injured list, Stanback’s projection would bump up to the top of the pack. The Als rushed for the second-most yards per carry this season (5.73) – Stanback averaged 6.2 yards per carry himself – and the Eskimos allowed the most yards per carry to opposing rushers in 2019 (5.41). With a price tag only about two thirds as high as it was at its peak this season, Stanback is the top value at RB this week.

On the plus side, Don Jackson is the cheapest RB on the slate. On the downside, Calgary was the second lowest volume (280 carries) and third least efficient (4.58 YPC) rushing attack in the league during the regular season. Add to that that Winnipeg allowed the fewest yards per carry (4.52) and only nine total TDS on the ground and the floor for Jackson is legitimately low single-digit Fantasy points. The Stampeders project for the fewest yards and TDs per carry on the slate so there’s no reason other than salary relief to consider Jackson.

On a per-target perspective, the Bombers pass defence was pretty average this season, but their having allowed the most receptions of 30+ yards and the most receiving TDs of any playoff team makes the Calgary receiving corps worth taking a long look at for the Semi-Finals. Reggie Begelton and Eric Rogers are the top-priced receivers on the slate and justifiably so, given they posted a combined eight games with 20+ Fantasy points with six of those going over 25. The upside is immense for the Stampeders group. Begelton should lead the team in targets and provide the safest floor, while Eric Rogers is still questionable to play and Mayala is a boom or bust candidate. He’s had three games over 21 Fantasy points in his past seven contests, but also three games with single-digit production.

The Eskimos receiving corps may be the biggest variable heading into the playoffs. The group of Ellingson, Daniels, and Collins had rates in the top 10 of all receivers near mid-season but each saw their rates drop 15-25% with Kilgore throwing them passes. If the return of Trevor Harris boosts their rates to early season form, each of the three receivers are significantly underpriced. Daniels production was the most significantly impacted as Kilgore lacked the ability to complete passes deep down the sidelines while Ellingson and Collins were easier completions from the slot. Given the Eskimos project for the most yards per target on the slate (8.72) and the Als allowed the second-most completions of 30+ yards of any playoff team (27), Daniels may be the most underpriced player on the slate.

The Als receivers will have a more difficult time than their opponents as they project for the second-fewest plays from scrimmage (53.5), versus an Eskimos defence that allowed just 7.84 yards per target this season. The positive thing for them is that Edmonton allowed three-quarters of their TDs through the air this season leading the Als group to project for the most receiving TDs per target on the slate. Geno Lewis leads in projections, but given Edmonton allowed more production to slots than wideouts this season, Bray may be a higher upside option while Posey may be as well if he returns to action.

There isn’t a lot to get excited about in the Bombers receiving corps as they run the lowest percentage of passing plays in the league (50.4%) and project for the fewest total targets this week (28.8). When a pie that small is split up pretty evenly over six to seven receivers the projections for all of them suffer. However, Rasheed Bailey has been one of their most targeted receivers since he entered the starting lineup and his being priced at minimum salary makes him an interesting option for salary relief. The Stampeders defence allowed the fewest yards per target (7.23) and second-fewest TDs per target this season, however, so none of the Winnipeg receivers will pop off the charts.

The first week of the CFL playoffs brings a pretty interesting set of matchups for defences as the two best and two worst defences in terms of yards per carry allowed face off against each other. Edmonton, Calgary, and Winnipeg were the top three in the league in terms of fewest sacks allowed, while all three were also in the top half of the league in terms of sacks created. Montreal was the real outlier among the playoff-bound defences as they created the fewest sacks this season while allowing the most of any playoff team. If there’s any ray of hope for the Als’ defence from a Fantasy perspective, it’s that Edmonton gave up the most turnovers of any playoff team while Montreal was in the top half of the league in forced turnovers.

From a Fantasy perspective, the Bombers and Stampeders are certainly the two most viable defences this week with an edge going to the Stampeders given their sack and turnovers rates in a game that is likely to be played with frozen footballs with a forecast gameday high of minus-16 Celsius.

No player should benefit more from the return of Trevor Harris than DaVaris Daniels and the matchup versus a vulnerable Alouettes secondary could make Daniels the best value on the slate.

The Bombers secondary has become increasingly vulnerable to the deep ball over the course of the second half of the season and that’s where Begelton can make defences pay.