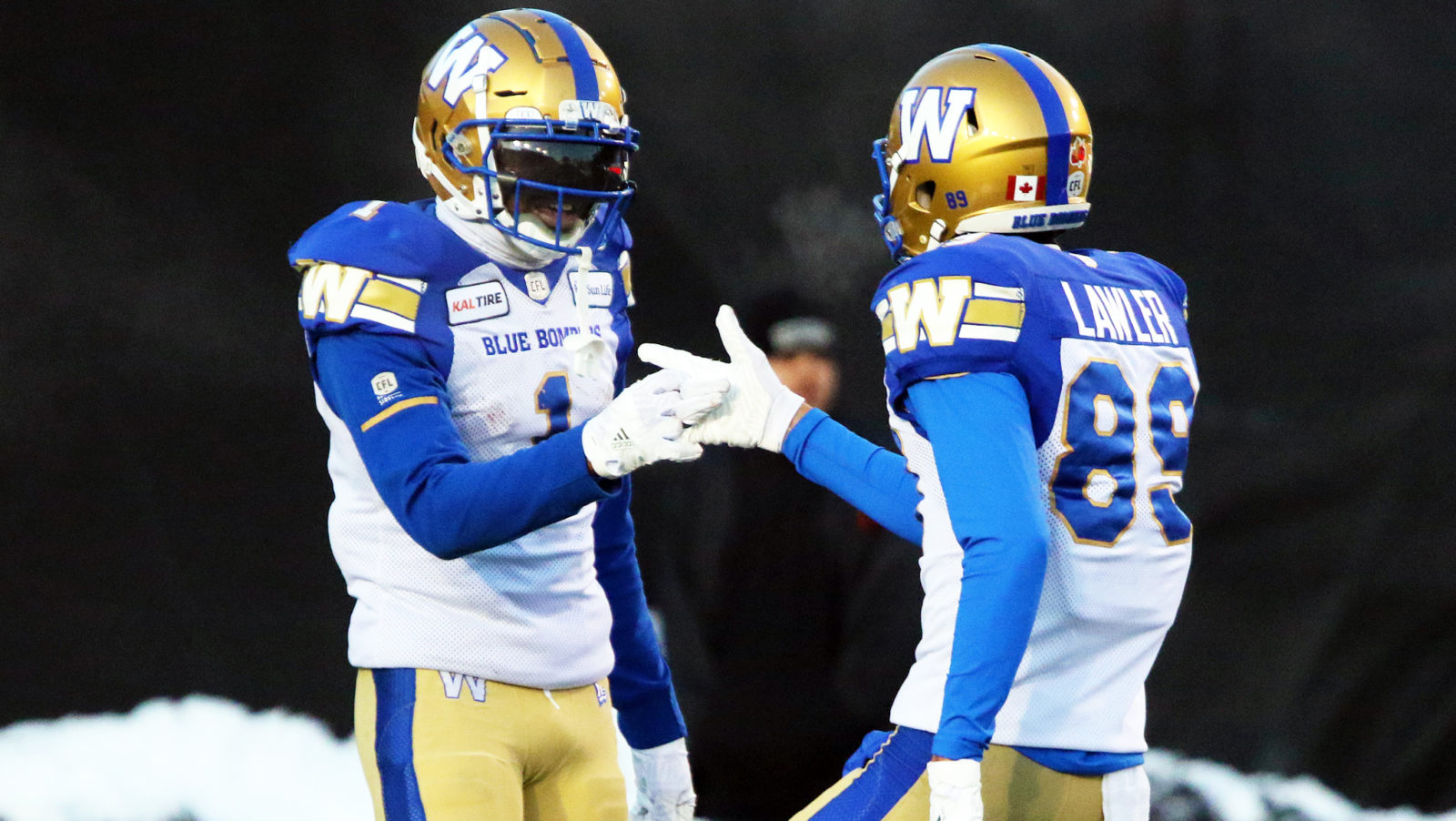 CALGARY — A massive second half led the Winnipeg Blue Bombers to a 35-14 win over the Calgary Stampeders as they advance to the Western Final.

The Bombers defence was imperative to the victory after picking off Stampeders quarterback Bo Levi Mitchell twice and not allowing a single Stampeder point in the second half.

Winnipeg used both Zach Collaros and Chris Streveler on their way to victory. Collaros tossed a touchdown pass to Darvin Adams and Streveler ran in the game-sealing major score late in the fourth.

The loss was the first for the Stampeders at home in a playoff game since 2013.

Zach Collaros and the Winnipeg Blue Bombers offence hit the field first at McMahon Stadium on Sunday afternoon. The team utilized both Collaros and Chris Streveler on their first drive – Streveler was in at short yardage and had a hand off to Janarion Grant – but the Stamps defence held strong forcing the Bombers off the field.

On Bo Levi Mitchell’s first throw, intended for Josh Huff, defensive pass interference was called on DB Mike Jones, bringing the Stamps offence to the Bombers’ five-yard line. After two rush attempts from Don Jackson and Ante Milanovic-Litre, Nick Arbuckle came in on short yardage and handed off to Reggie Begelton, who got the edge around Willie Jefferson and into the end zone for the first major score of the contest.

That score, along with Rene Paredes‘ convert, gave the home team a 7-0 lead.

As the Stampeders were driving with just 30 seconds left in the opening frame, Jones redeemed himself for his earlier DPI call that led to a touchdown, hauling in an interception on a pass intended for Huff on the Bombers’ seven-yard line.

That turnover brought the Bombers offence – that had been held to a pair of two-and-outs following their opening possession of the quarter – back on the field with 16 seconds on the clock.

After what started out as a promising drive for the visitors – Collaros utilized Darvin Adams for a 37-yard gain, Kenny Lawler for 12 and Andrew Harris for four – the turnover didn’t turn into any points and they were forced to punt.

The Bombers first points of the ball game came from a safety as Mitchell was called for intentional grounding in the end zone. That made the score 7-2 in the early part of the second quarter.

Collaros started to move the chains down the field on their next drive but had to settle for a field goal. Justin Medlock booted a 34-yarder with 8:38 left in the half to cut Calgary’s lead to 7-5.

Begelton scored his second touchdown of the contest with two minutes left before half time. The 19-yard score, along with Paredes’ completed convert, extended the Stamps lead to 14-5.

Yet again, the Stampeders defence held the Bombers to a field goal on the blue and gold’s next drive. Medlock made his 52-yard attempt, his second field goal of the game, to cut Calgary’s lead to 14-8. That would be the final scoring play of the first half.

Streveler came into the game for a few plays on Winnipeg’s first drive of the second half including a QB sneak on third and inches, a 17-yard run and a hand off to Nic Demski. Demski found a hole out of the backfield and ran into the end zone untouched for a 33-yard major score. Along with Medlock’s point after, the Bombers took their first lead of the contest (15-14).

Winnipeg’s held the Stamps off the scoreboard in the third quarter and Mitchell did not throw a single passing yard in the entire 15 minute frame.

To start the final quarter, Medlock booted his third field goal of the contest, capping off the drive with a 42-yard field goal. That extended the Bombers’ lead to 18-14.

After holding Calgary to a two-and-out, Winnipeg continued their scoring in the second half. Collaros aired it out to Adams, who got in behind Stampeder defensive back Tre Roberson, and ran into the end zone for the 71-yard score. Along with the completed convert, Winnipeg extended their lead to 25-14.

Once again, the Winnipeg defence was making things difficult for Mitchell and co. as Nick Taylor intercepted Mitchell and brought the Bombers right back onto the field.

That turnover led to Medlock’s 45-yard field goal attempt that banked off the upright and through to extend Winnipeg’s lead to 28-14.

Things didn’t get any easier for the Stampeders offence when they got the ball back. Mitchell threw another interception on the next drive, this time it was Mercy Maston who hauled in the turnover.

That put the Bombers in scoring position and it was Streveler who ran in a 39-yard touchdown. Along with the completed convert, Winnipeg’s lead was extended to 35-14 with 5:41 left in the fourth quarter.

Once again, Winnipeg’s defence held strong as Mitchell was trying to move the chains and forced the Stampeders to turn the ball over on downs as they approached the three-minute warning.

There would be no scoring in the final three minutes and Winnipeg advanced to the Western Final on Nov. 17 against the Saskatchewan Roughriders.