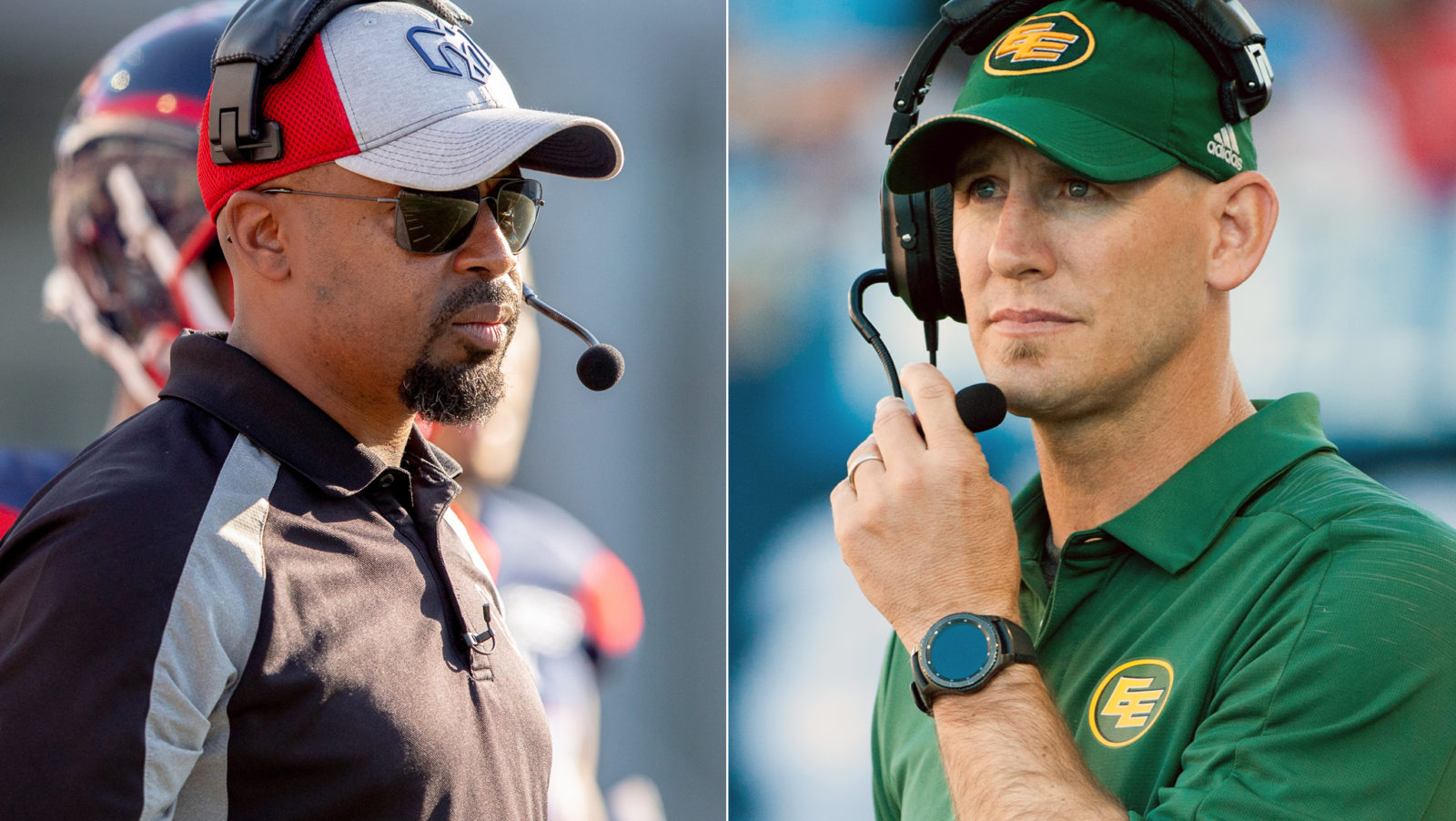 They’ll stand about 40 yards apart on the sideline in Sunday’s Eastern Semi-Final and on first glance, Jason Maas and Khari Jones couldn’t be more different.

Over the last four years, we’ve seen Maas hold very little back on CFL sidelines as the head coach of the Edmonton Eskimos. The word fiery might be the one most often attached to Maas. His most recent example of that came a few weeks back when a call didn’t go his team’s way, was upheld on video review. Maas promptly threw his challenge flag in the garbage.

As we’ve gotten to know Khari Jones this season, we see the opposite. Like any coach, Jones gets mad on the sidelines, but the rookie head coach’s persona is generally a joyous one. He dances on the field during warmups and when he’s watching a big moment in a game unfold. He seems to have a smile on his face more often than not.

It’s strange to picture now, 14 years later, but Maas and Jones briefly brought those yin and yang personalities to the Esks at the same time. They were teammates when training camp opened in 2005. Jones didn’t make the final roster.

“It was brief,” Maas said on Saturday.

“I honestly felt like Khari had game left in him to keep on going if he wanted to. It was a shame we didn’t keep him on that roster, he would have been an asset with the experience he did have but the management decided to go in another direction.

“Khari’s a great guy. High character individual. Even though we were competing, he was just like any teammate. He was a great teammate.”

It was a short stay in Edmonton, but Jones has good memories of his time there. Both stays, actually. The Esks brought him back in 2006, only to release him in training camp again.

“He was cool. I liked Jason, I liked him a lot,” Jones said.

“I liked playing against him, I liked competing against him and then having him as a teammate was solid to actually get to know him a little bit.

“Very intense dude, he knows what he wants and how he wants it.”

Jones said that earlier in his career, when he was still playing for Winnipeg, he and Maas went for dinner after a game and talked football.

“We had a good conversation about throwing over the middle. I was throwing dig routes to Milt (Stegall) or something like that, we talked about that. Jason’s a good dude.”

All these years later, these two different coaches go into this playoff game in different situations.

Jones had the kind of year that put him in the early stages of the coach of the year debate, pulling a perennially bad Alouettes team out of the dirt and leading them to their best season since 2012. His future is up in the air, given that he doesn’t have a contract yet — he’s stated that he’d like to be in Montreal long-term — but he’ll certainly have no shortage of options to choose from when the season ends.

Maas has had to endure chatter about his future throughout this season, where the Esks watched a strong start turn into an 8-10 season. Edmonton’s a tough sports city that doesn’t deal well with losing. With Rick Campbell’s surprise departure from the REDBLACKS this week, many of those disgruntled fans started envisioning Campbell back in Edmonton, where his father Hugh had so much success with the Esks.

“It’s nice to have a guy that’s fiery and passionate,” said receiver Greg Ellingson, who like Harris had previously had Maas as his offensive coordinator in Ottawa.

“You need to bring energy to a game like this when when there’s nothing else that matters besides these four quarters and he’s going to do that. And we’re going to follow that lead.”

Jones and Maas will cross paths once again on Sunday in Montreal, the one-time teammates with their two contrasting coaching styles bookending the sideline at Molson Stadium. Two very different coaches in two different situations in their careers, each trying to win to keep their respective seasons alive.