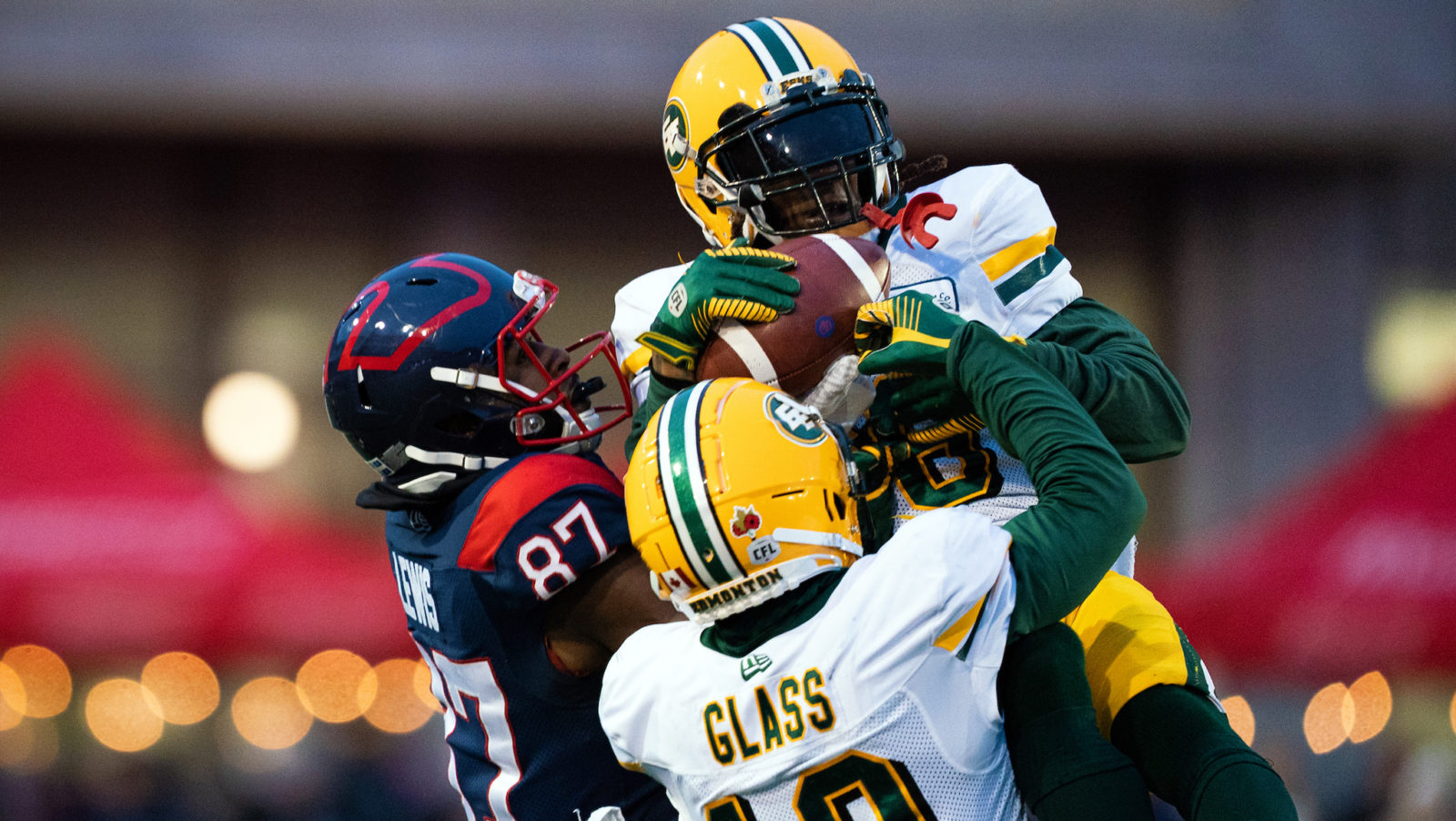 Hello, Nic Demski. That was some kind of playoff-mode you accessed on
Sunday. Tell me. Have you located Sarah Connor yet?

Looks like we can put the ol’ “rest versus reps” argument to bed. Eskimos’ quarterback Trevor Harris tucked it in and read it a bedtime story. Nighty-night.

Harris played one game prior to the Eastern Semi, in the previous two months, and sat out last week’s regular-season finale just for precautionary reasons.

Well, he went 36-for-39 against the Alouettes, for 421 yards, completing his first 22 passes in succession. One touchdown. Oh, sure, there was an interception in there, but it was a batted ball that caromed perfectly into lineman Woody Baron’s hands. Oh, and Harris made the tackle on the play, immediately. Bonus stat!

“Playoff Trev,” one of the Eskimos yelled out as Harris did a post-game interview.

Reps? Pffft. Established players can do just fine coming off a rest. More than just fine, it turns out.

BONUS TAKEAWAY: Josh Johnson has a cloaking device. How else to explain that second interception of his?

2. A LEOPARD CAN CHANGE ITS SPOTS: CASE NUMBER ONE

For most of the regular season, the Eskimos were known as a team that could not get out of its own way far too often, taking penalties at the worst of times. Or just anytime, really.

Flagged on 197 occasions in 2019 (for an average of 11 yards per penalty), the Eskies were the CFL’s most penalized team, with 75 of those penalties being classified as “avoidable,” including 46 for roughing and 8 for objectionable conduct.

That’s why, at one point, Trevor Harris was spotted pointing at his noggin and yelling “keep your head” to anyone and everyone around him as the game wore on, a general reminder to a team that hadn’t always done that during the regular season.

The Eskimos were called for penalties seven times during he Eastern Semi-Final, for just 30 yards.

And they had each other’s backs on discipline. when Tyquwan Glass made a terrific tackle on Vernon Adams, denying Montreal a first down on the opening series of the second half, he decided to linger over top of Adams, and appeared ready to go into full taunting mode. Swiftly, teammate Jovan Santos-Knox came over, grabbed Glass, and pulled him away.

3. A LEOPARD CAN CHANGE ITS SPOTS: CASE NUMBER TWO

Throughout the 2019 campaign, there was something certain about the Winnipeg Blue Bombers and that certainty had to do with a pass defence that could be beaten deep and often, an antithesis to the team’s outstanding, league-leading run defence.

CFL teams passed against Winnipeg more than any other team, in 2019 (661 times), and there was a reason for that number. The Bombers gave up more big-play passes than any other team in the league during the regular season (32 completions of 30 yards or more). Leaky pass defence had led to embarrassing, come-from-ahead losses to both Toronto and Montreal, to give two examples.

So what if Calgary didn’t have a prodigious run game to lean on, they were sure to ride the arm of Bo Levi Mitchell anyway, locating holes in the Winnipeg aerial fortifications with a certain ease.

Well, a funny thing happened on the way to being torched. The Bombers’ defence held Mitchell to a 43% completion rate and 116 yards, allowing one touchdown reception but picking off three passes themselves.

BONUS TAKEAWAY: You figured the Stampeders would miss Eric Rogers a ton? You were right.

I’ll admit it. I’m not a huge fan of a tandem quarterback strategy, with two pivots shuttling in and out for varying lengths of time at different points in a game. Generally, I think it’s a sign that a coaching staff doesn’t have faith in the one guy that ought to be the starter.

I feel confident in asserting that that is usually the case, too.

But Winnipeg’s use of quarterbacks Zach Collaros and Chris Streveler worked out just magically in the Western Semi-Final, and all the credit in the world goes to head coach Mike O’Shea and offensive coordinator Paul LaPolice for making it go. Oh, and to Collaros and Streveler, I maybe should say.

With Collaros throwing, and Streveler galloping – even in a limping fashion – the Bombers’ offence found its groove as the second half played out, Winnipeg pulling away en route to a 35-14 win over the Stampeders. Most of the credit should go to the gutsy Streveler, whose determined steamrolling was precisely the tonic a struggling Bombers’ offence needed to loosen the lid on the jar.

And there you have it. Shuttling two quarterbacks in and out of the game can work after all, not necessarily robbing either one of them of momentum. In fact, with Collaros’ 71-yard touchdown pass to Darvin Adams and Streveler’s 24-yard romp for a major — both in the fourth quarter — you could say the scheme actually provided them with some.

BONUS TAKEAWAY: I daydream about the Bombers listing Streveler as a running back at game time, and lining him up beside Collaros in the backfield, Andrew Harris on the other side. What could Paul LaPolice do with THAT formation? Mind-blowing.

BONUS BONUS TAKEAWAY: Sure, Mike O’Shea’s seafaring beard seemed like a lot during the summer months, but tell me: who had the warmest face at McMahon Stadium on Sunday? Mike O’Shea. Always planning ahead.

And of their eight regular-season wins, none had come against a team with a better than .500 record and seven of them came versus Toronto, Ottawa and BC, collectively.

Sunday’s victory in Montreal showed the Eskies at the best they’ve been all season, however, and for that, they should be given a round of applause.

It doesn’t mean they’ll win in Hamilton on Sunday. After all, Hamilton’s pass defence is a far sight better than Montreal’s. And the Eskies did revert, a little, to stall mode in the second half against the Alouettes, settling for four Sean Whyte field goals in order to seal the deal.

If the Eskimos went into the semi-final whispering “why not us?” under their breath, they earned the right to say it with much more volume, after the win. A little belief is a dangerous thing.

AND FINALLY… Labour Day in Regina is lit. I mean really lit. What, then, is the Western Final, with the Blue Bombers visiting, gonna look like?