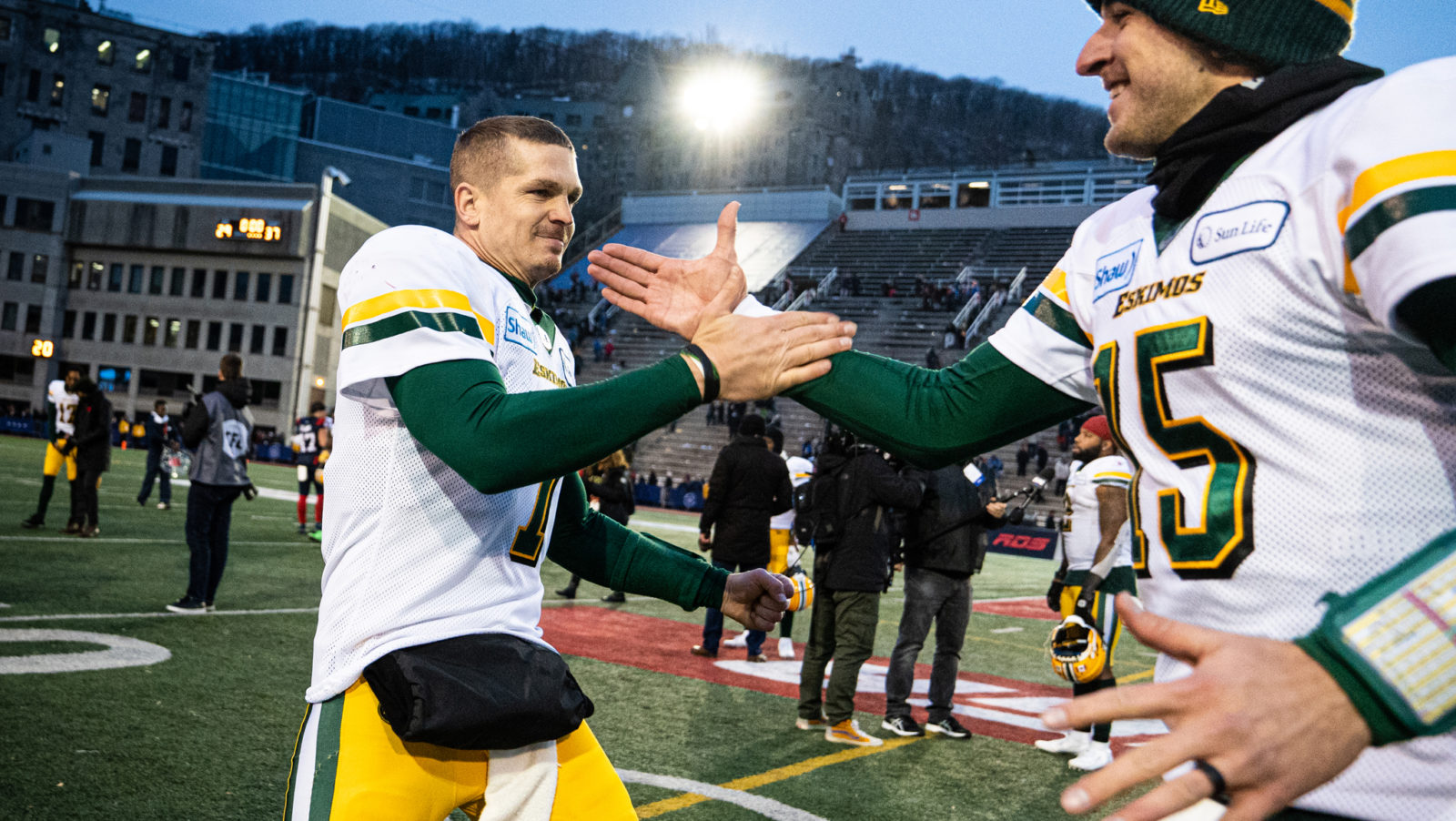 I had concerns about Trevor Harris heading into Sunday’s Eastern Semi-Final. After all, Edmonton’s starting quarterback had appeared in just one game in the span of about two months prior to his first playoff start of 2019. It turns out those concerns were entirely misplaced, because Harris was outstanding in a 37-29 win over the Montreal Alouettes.

I’ve always been a big fan and defender of Harris, but I didn’t give him and his experience enough credit. He’s been in big games before and he knows what he needs to be ready. Despite just one start between early September and early November, Harris didn’t show even a hint of rust against the Als. I’ll think twice before I doubt the guy again!

I really think Harris has learned from his last two playoff years, which saw him lose twice and win once. 2017 saw Harris throw 60 passes and for 457 yards, but the REDBLACKS had trouble turning that into points in an Eastern Semi-Final loss to Saskatchewan. Then there was 2018, when Harris set a playoff record for touchdown passes one week only to really struggle against Calgary in the Grey Cup.

He’s been there and done that now. After understudying to Henry Burris in 2016, Harris has now played in tough playoff games and has handled all the pressure that goes along with it. As such, he was much more prepared to go on the road against a good Montreal team and perform the way his team needs him to. Harris did that on Sunday, and then some.

The guy threw three incomplete passes all afternoon long and finished with 421 yards and a touchdown. His touchdown total would have been higher, too, but CJ Gable got the job done once the Esks were near the end zone. Make no mistake, though: Harris was dynamic and dialed in all day long.

As for my concerns about rust, well, they were valid but were also put to rest about two minutes in. Harris didn’t play in Edmonton’s season finale against the Riders, which I was skeptical of. But if Harris felt he was better served not to play, to rest his arm, and to avoid injury, he was probably the guy who knew best.

The playoff journey is just starting for the Eskimos. But with what we saw from Harris on the road against the Alouettes, fans in Edmonton should be encouraged for next weekend’s Eastern Final. I don’t know how that game is going to play out, but I do know I won’t be raising any concerns about Harris.

I chose the Stampeders to win the Western Semi-Final, but I’m not shocked Winnipeg won. I thought it was going to be an extremely close game either way, so regardless of what team I chose here at CFL.ca, I knew it could go either way. What I didn’t see was a blowout win on either side, which is why seeing the Bombers roll to a 35-14 win at McMahon was a straight stunner.

I don’t know what clicked for Winnipeg at halftime, but you could tell there was something different as soon as the third quarter kicked off. The Blue Bombers forced Calgary into one of many second half two-and-outs to start, and immediately followed with a seven-play touchdown drive that took just 3:30 off the clock. They looked urgent and desperate and the Stamps couldn’t match.

I was very interested to see how much of an x-factor Winnipeg’s dual quarterback look was going to be. I thought it could be a really interesting element to the game, but it made more of an impact than I could have anticipated.

After a shaky start, Collaros really settled in and moved the ball well, which allowed the run game to be a factor. Streveler, on the other hand, was explosive and dynamic, which was a slight surprise knowing how uncertain his status was heading in.

Even more stunning was how Calgary struggled to slow him down, even though they knew what he was going to do every time he took a snap. It never felt like there was a true threat of Streveler passing, and yet he still averaged more than six yards per snap. That’s impressive going against a defence that knew exactly what to expect.

I’m not shocked the Bombers won. I’m not surprised Calgary lost. I am pretty stunned, however, that one team won in such convincing fashion. I envisioned a pair of evenly matched teams going head-to-head on a cold prairie afternoon. The fact it didn’t go that way is a huge credit to Winnipeg and how well they executed.

I was really hoping the BC Lions would give DeVone Claybrooks another year as head coach. I know year one was disappointing, especially compared to expectations, but I really don’t think it should have cost him his job. The Lions brought Claybrooks in to start building a new identity, which is a longer process than one 18-game season.

There were definitely missteps in year one for Claybrooks, but I feel a highly touted and heavily recruited coach should be given a chance to learn from those mistakes. I’d probably feel differently had BC not shown some real signs of improvement in the weeks leading up to Mike Reilly’s season-ending wrist injury. I still think Claybrooks can coach in this league, so it’s too bad it didn’t work out in Vancouver.

Finally, it’s tough not to like the storylines heading into next weekend. After being traded out of Saskatchewan, Zach Collaros returns to Mosaic as Winnipeg’s starting quarterback. And the Eskimos, with so much talk about Jason Maas’s future as head coach, have a chance to become the first crossover team to advance to the Grey Cup. The countdown is already on.