Accuracy Grades: Who was on target in the Division Semi-Finals? 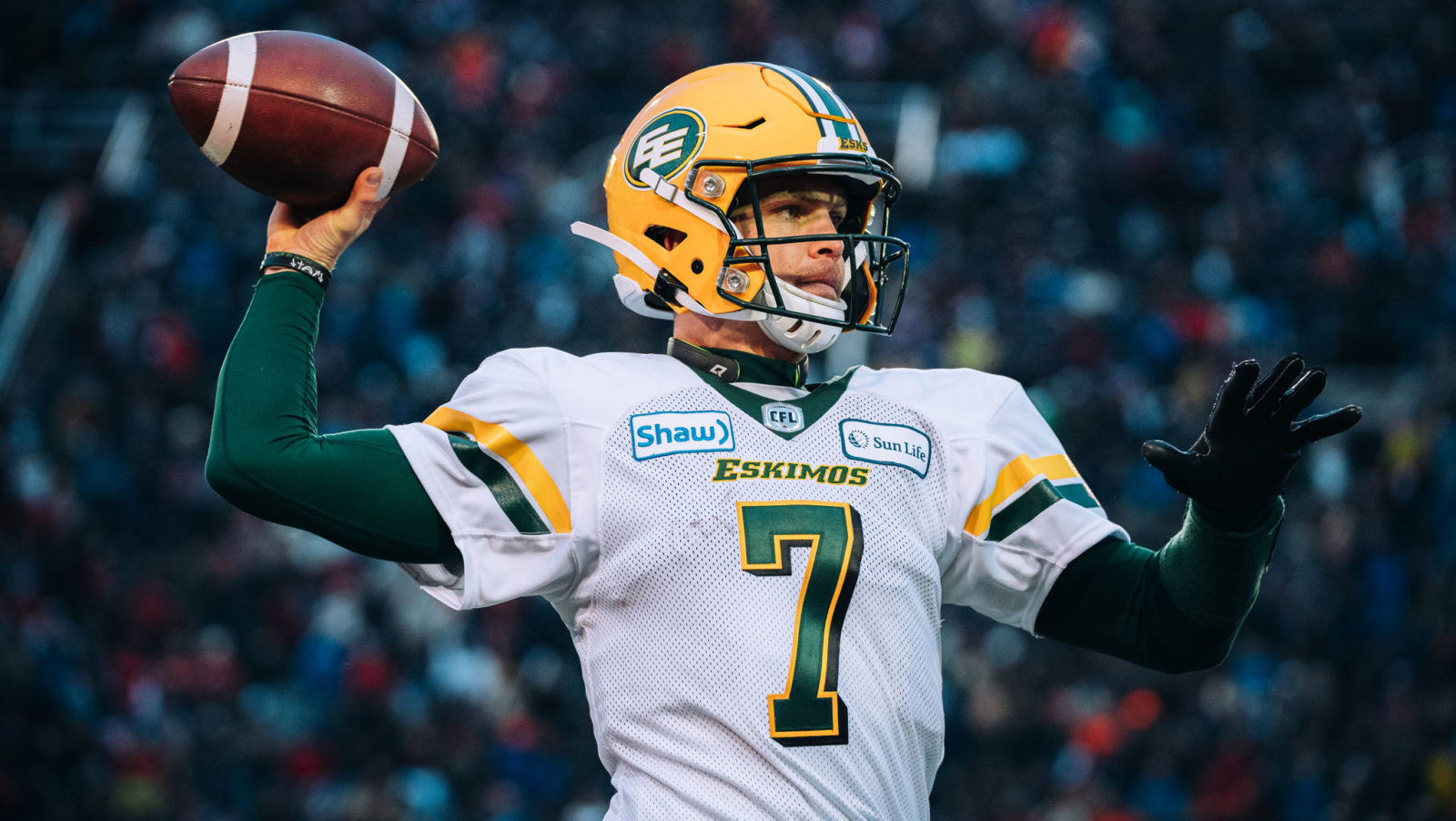 Accuracy Grades: Who was on target in the Division Semi-Finals?

Well, I think you know where we’re going with all of this.

There was one quarterback that stood superior above the rest unquestionably in the Eastern and Western Semi-Finals as he set historic marks of accuracy and efficiency.

That’s right, Trevor Harris set his 2019 season high mark in the biggest game of the year yet. He did it with a perfect mixture of scheme and skill, more on that in a minute.

Coming in last place this week was Calgary’s embattled leader Bo Levi Mitchell with a mark of 51.0. That was easily his lowest mark of the season. It wasn’t hard to see the impact that the frigid Alberta cold had on Calgary’s passing game but more concerning was the lack of communication and understanding with receivers.

It felt like an unjust end to a valiant comeback attempt from an early season pectoral injury that robbed us of a full Bo Levi season, but he’ll be back with more motivation than ever in 2020 and should challenge for the accuracy crown.

Now a look at the top three performances of our first playoff week: 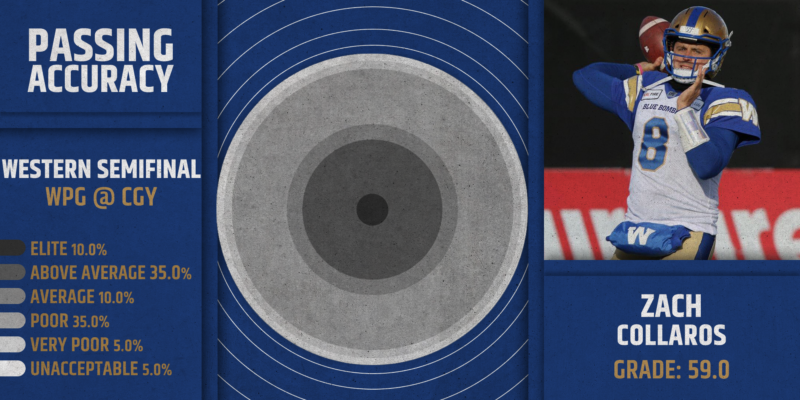 It feels so good to have Collaros back in the conversation. While only going 11/21 in the Western Semi-Final, Zach did supply the dagger with twelve minutes remaining when he perfectly fluttered a ball 40 yards down the left sideline over Tre Roberson and into the waiting arms of Darvin Adams, who carried it 31 yards into the end zone.

As a CFL analyst I am impartial. As a lover of the game and great stories, I hope Zach has some magic left in that veteran right arm for the Riders on Sunday. 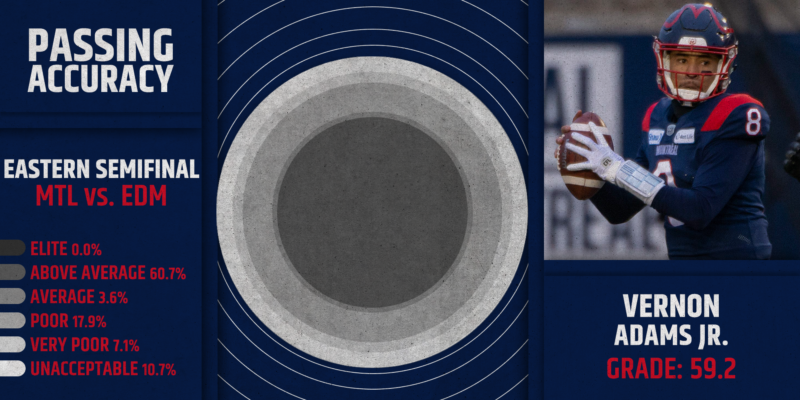 Vernon Adams Jr. was everything to Montreal in 2019. The energy and enthusiasm he brought in concert with personal evolution and maturity bodes well for the Alouettes future if they can build something sustainable around him. As for Sunday in Montreal, his last interception was caused by desperation, but if you take the first two off the board we might be talking about Vernon Adams Jr. being one game away from his first Grey Cup appearance as a starter. 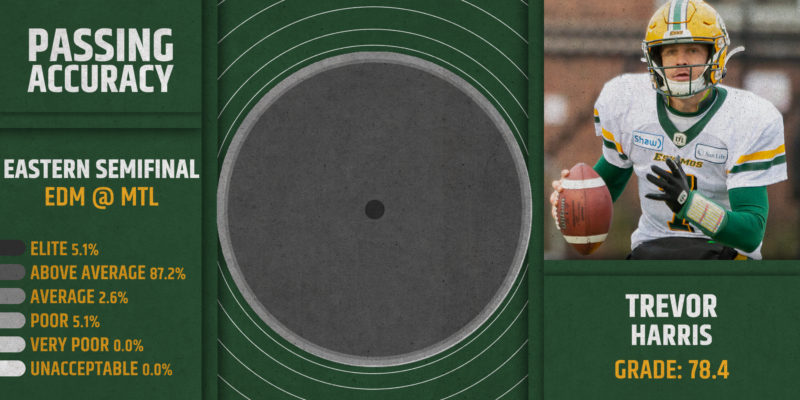 What can I say.. The guy is really damn good. Trevor came off an arm injury that had to scare him for a while not sure if he would be able to recover in time to contribute on a day like Sunday, but he did and looked as fresh and as calculated as ever.

Should he put on a similar encore performance in the Eastern Final, Edmonton will have every opportunity to be the first crossover playoff team to make the Grey Cup.

Here’s where the season standings have us headed into the final showdowns in Regina and Hamilton this Sunday: 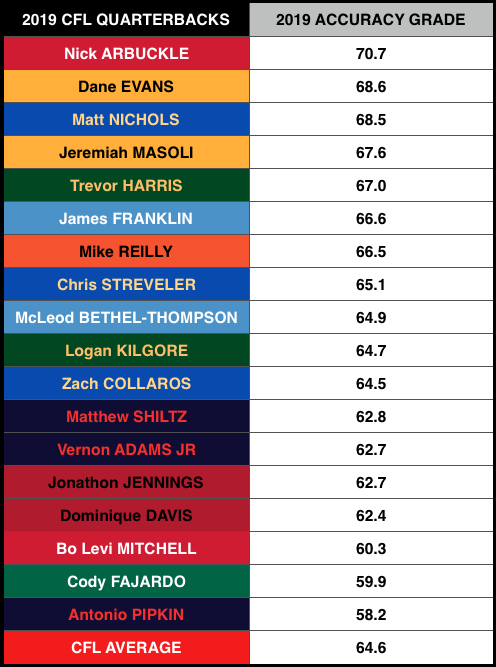 I wondered just how much his record breaking performance could move the needle for Trevor Harris and it delivered. Harris jumped all the way from ninth to fifth in a single game, which might not seem like a lot, but in the context of that many game scores paired against each other that’s a huge jump.

Vernon Adams Jr. made the leap from 16th to 13th and that was more a statement on his up and down regular season accuracy than an all-star performance through the air Sunday in a playoff loss.

Finally, and most shocking to me was Bo Levi’s drop from sixth all the way to 16th, where he will finish 2019. The combination of fewer games played and Bo’s uncharacteristic performance Sunday at home led to the drop off.

This Sunday we get to see if Harris can leap frog some big names on the big board again and if Cody Fajardo can out duel the suddenly spry Collaros arm with Streveler’s legs supplying the insurance. Can’t wait.