Ferguson: A QB battle for the ages in the Eastern Final

Ferguson: A QB battle for the ages in the Eastern Final

At some point, the playoffs come down to one simple question: Who can make a throw?

It might be a deep ball, it might be a window shot between linebackers on second and medium or it might even be a screen pass that only works if the quarterback contorts his body to avoid pressure and deliver the ball in a spot only his man can reach it.

Regardless of the situation, quarterbacks have to make plays in playoff games otherwise they will walk to the tunnel, sit in their locker and think about all the throws they could have made to change the outcome.

RELATED
» Numbers Don’t Lie: 3 stats that will define the Eastern Final
» Accuracy Grades: Who was on target in the Division Semi-Finals?
» Head to Head: Who has the edge in the East?
» Ferguson: Williams could be a game-breaker in Eastern Final

In the 2019 Eastern Final this Sunday, we have two quarterbacks more than capable of making throws in the games biggest moment.

Dane Evans in just his second CFL season has stepped into a role he himself admitted Wednesday he could never have imagined having to play back in training camp. All he’s done since Jeremiah Masoli fell to a season-ending knee injury is pace the CFL in a variety of statistics categories.

One category that is difficult to measure? Big time throws. And he makes plenty. 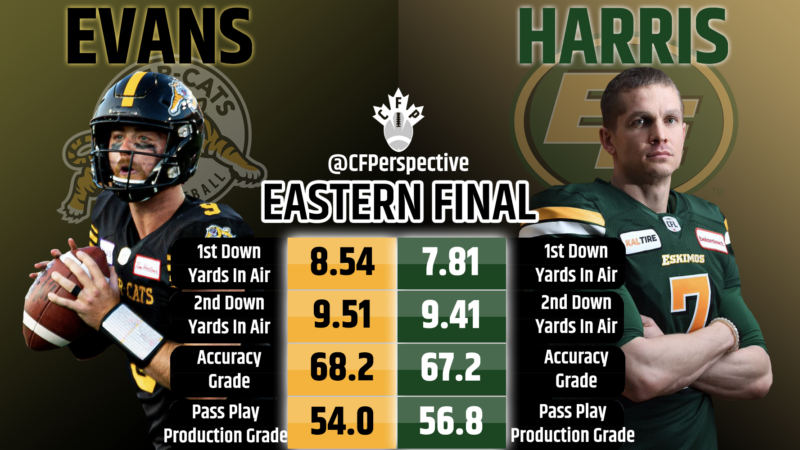 On the other side is Trevor Harris. The consistent, steadying force the Eskimos so dearly craved heading into the playoffs after an up and down regular season. Trevor has proven over his veteran CFL career he can beat you over the top, but prefers to play a game of football operation and pick you apart without ever turning his head coach’s nose red in frustration.

So we’ve got two good ones heading into a season-defining matchup, but what are the finer points that separate these two elite Canadian Football League passers?

In Edmonton, they appear to have no interest in playing the analytics game, attempting just two and converting on none. Could you imagine if a trip to the Grey Cup comes down to a two-point conversion attempt for the Eskimos and Trevor Harris has to cash in for the first time all season or be sent home packing for the off-season?!

If Harris and the Esks are to win, it likely won’t be due to a last-second dramatic conversion attempt, it will be a systematic deconstruction of the Ticats defence over three hours, a type of outing he is more than familiar with as shown by Harris’ last three games against Hamilton below. All, of course, as a member of the REDBLACKS last season. 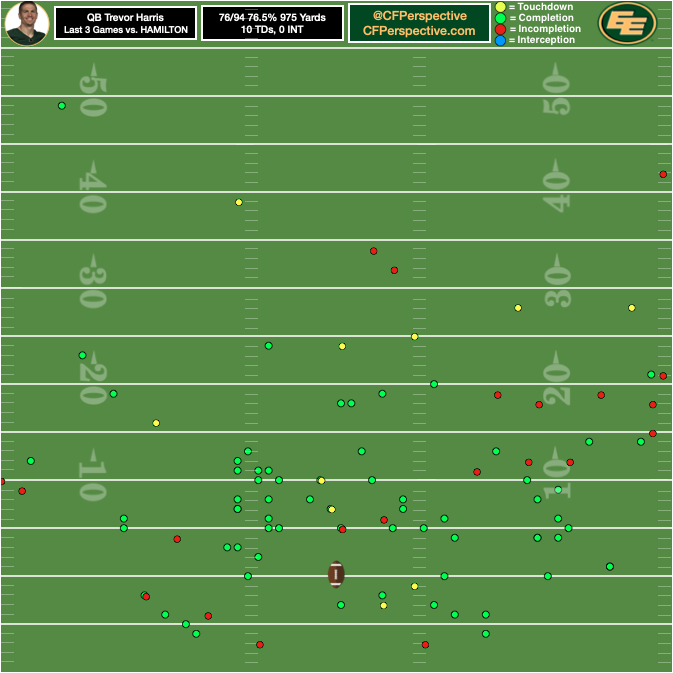 It’s not just the Ticats that have worn the scars of a dialled in Harris outing. Montreal felt the pain last week allowing 36/39 passes to be completed for a record 92.3% completion rate. Here is Harris’ 2018 Eastern Final against Hamilton paired with his most recent East playoff outing last week. 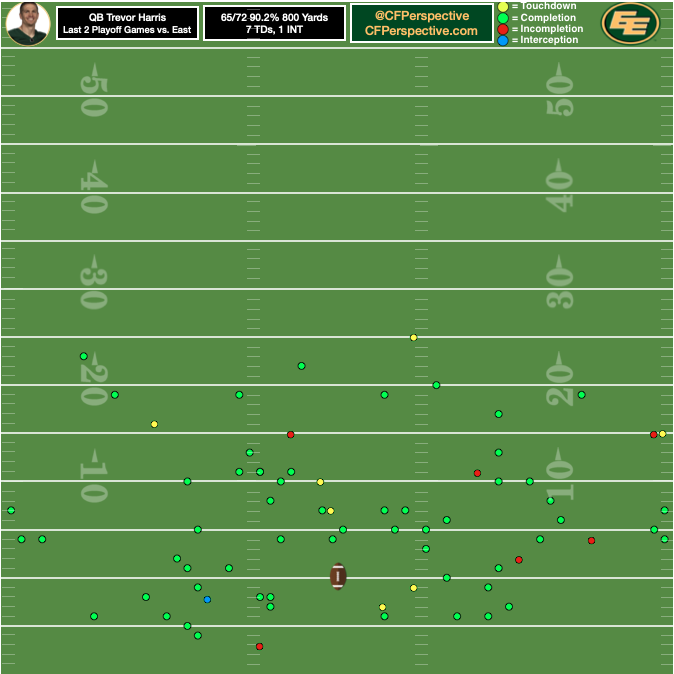 Where is Harris finding all this comfort and rhythm from? How does he make it look so easy despite being on a new team, in a new city, for just the second time in his CFL career? A large part of that answer is Greg Ellingson, who has received the highest rate of pass targets (Target %) on Edmonton this season while also maintaining the highest Eskimos production grade when targeted in the passing game above teammates Ricky Collins Jr., DaVaris Daniels and CJ Gable. 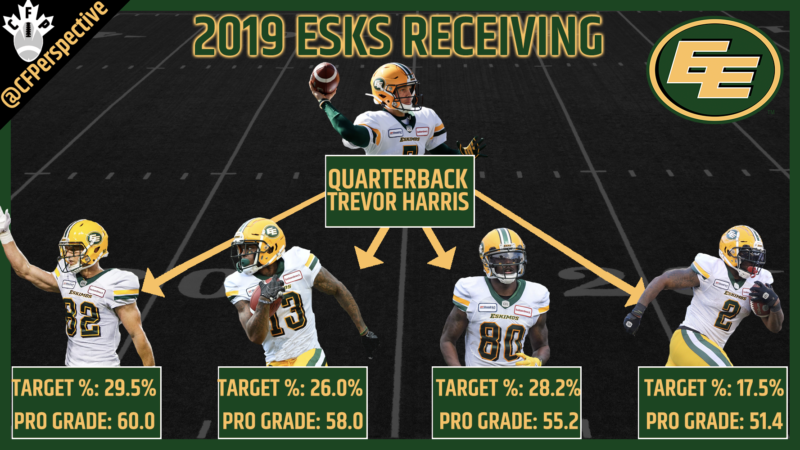 As for Dane Evans, his regular season against the Eskimos defence in Weeks 15 and 17 was nothing short of sensational. It included a dynamic first quarter on the road that saw Hamilton leap out to a big lead and a 2019 record tying completion streak (19 with Matt Nichols). Here are Evans’ targets for the two games against Edmonton. 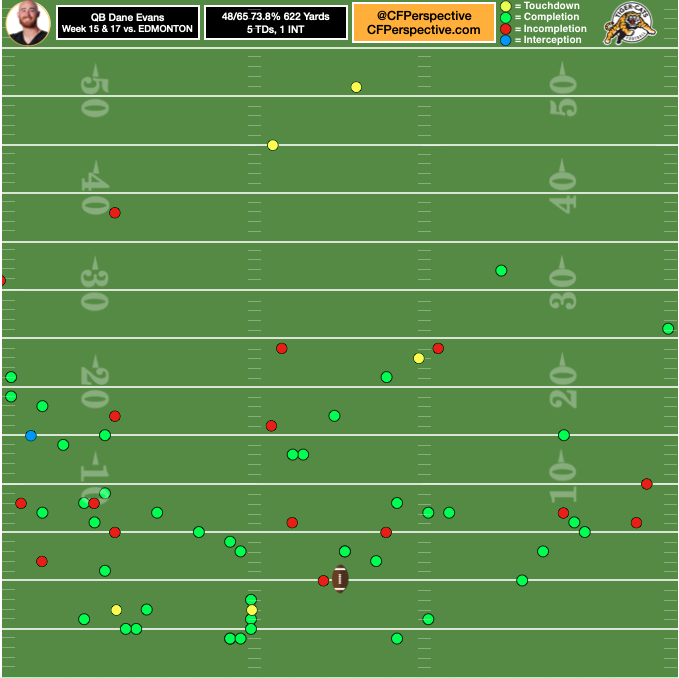 You can almost see the route tree in this target chart. Deep over routes, vertical crossers, wide side corners and savvy check downs when the moment requires. A visual only reinforced by Evans’ 2019 heat maps for attempts. 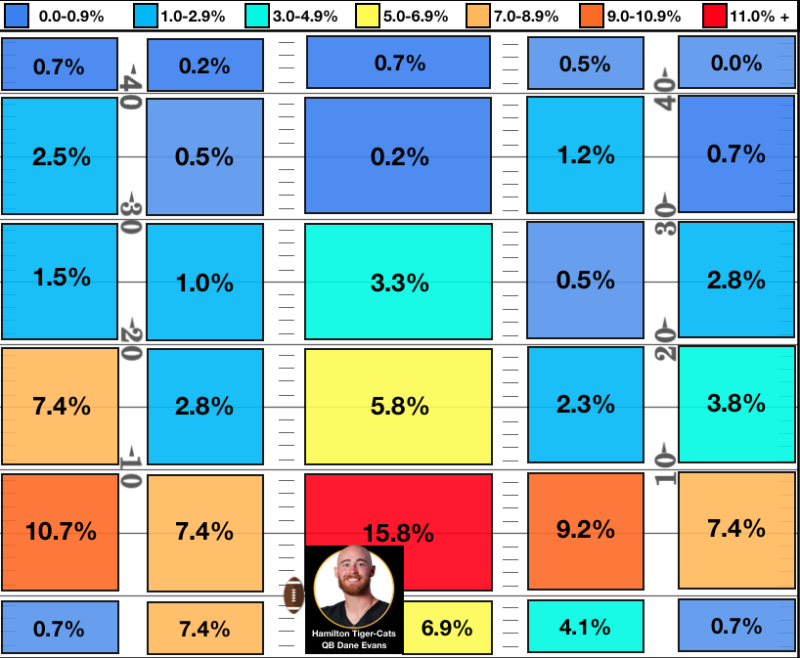 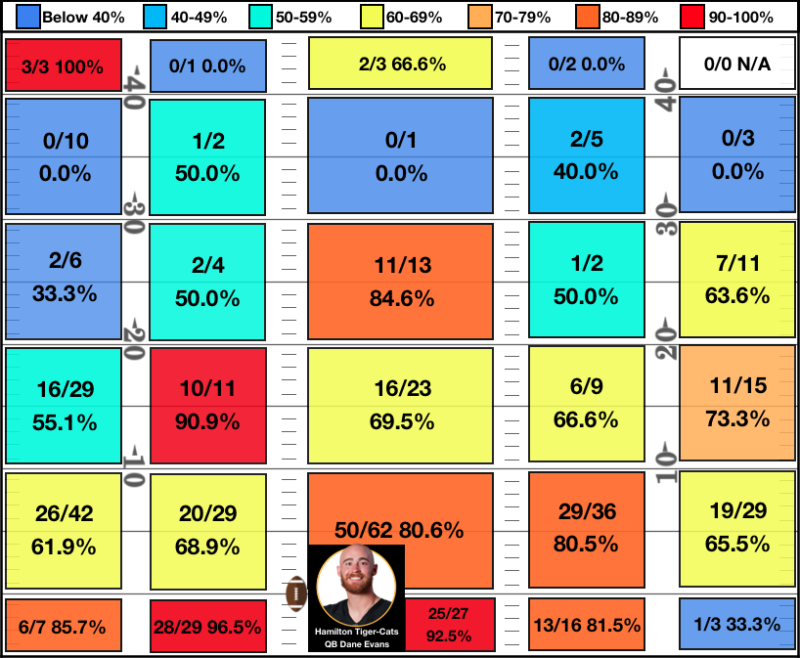 No one area can define Evans tendencies which has allowed him to spread the ball around to many receivers in 2019, but one man stands above the rest for Hamilton, their diminutive yet dominant speedster Brandon Banks, who leads the way in pass target percentage by a wide margin with Ticats Most Outstanding Rookie award winner Jaelon Acklin producing the most when targeted. 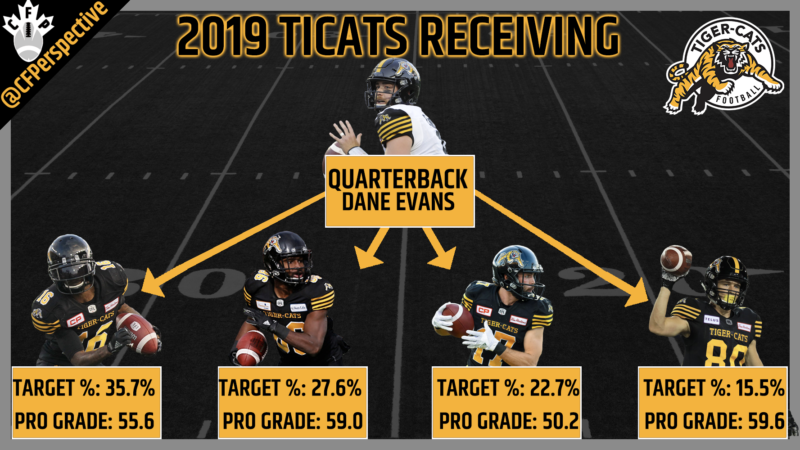 Both these men have the chance to put their stamp on the CFL playoffs Sunday when the Donut Box in Hamilton raises the black sails and sets course for the Grey Cup. The environment in Hamilton will be unlike anything experienced in the last twenty years with one of Evans and Harris getting to embrace it all in the glory of victory while the other will look back on what could have been for the rest of their professional football life.