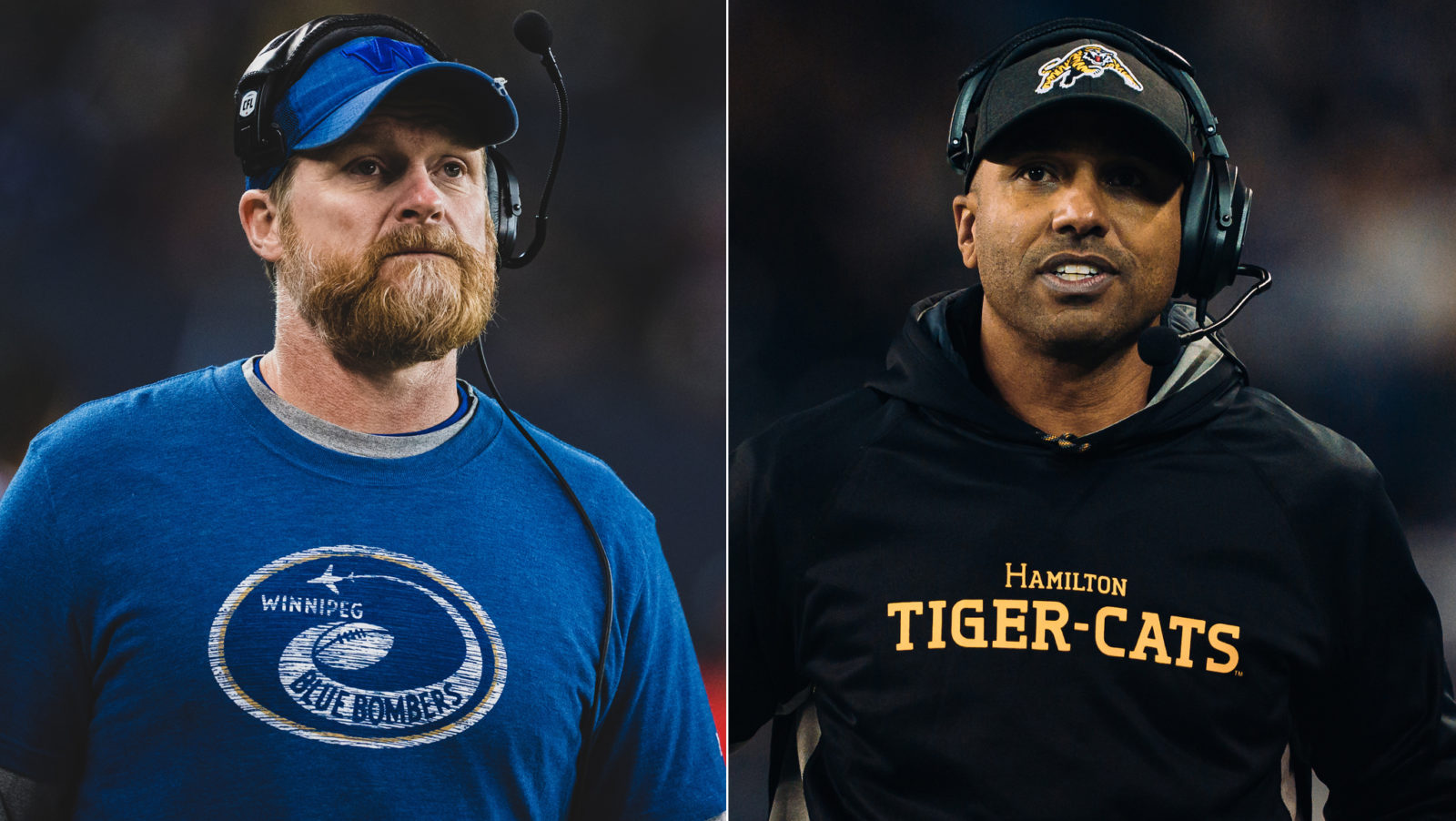 Jim Barker may not be at the head coaches press conference on Wednesday in Calgary, but at some point he’ll see video, or photos from the event. He’ll take a look at the two men on the stage together and he’ll smile.

There’s something of a proud papa feeling there for Barker, who, as a fresh hire by the Toronto Argonauts in February, 2010, had to assemble a coaching staff quickly.

He took a chance on two recently retired players with no prior coaching experience. He hired Orlondo Steinauer as his defensive backs coach and Mike O’Shea as his special teams coordinator.

Nine years later, both are head coaches, O’Shea with Winnipeg and Steinauer with Hamilton. They’ll meet on Sunday in the 107th Grey Cup presented by Shaw.

“Orlondo had been recommended to me by a couple of people in the organization. We were five minutes into the interview and I offered him the job,” Barker, an offensive assistant with the Ticats this year, recalled.

RELATED
» Head to Head: Who has the edge on Sunday?
» O’Leary: Collaros back in Grey Cup after long winding road
» Cauz: No shortage of storylines in 107th Grey Cup

Barker was named the coach of the year in 2010, pulling the Argos out of the dregs of a couple of abysmal seasons.

“It wasn’t because I did anything great. It was because I had young guys like (Steinauer and O’Shea),” he said.

Watching them through their time as head coaches, Steinauer and O’Shea seem like polar opposites. Through his rookie season in the role, Steinauer radiates energy and seems comfortable in his daily dealings with the media.

Through six years in Winnipeg, O’Shea is a more stoic presence on the sideline. His exchanges with the media, while never hostile or unpleasant, tend to be brief. His answers seem calculated and designed to not reveal too much information about himself or his team.

The question about their differences isn’t fully presented to Barker before he jumps in. They are indeed as different as they look to those of us on the outside.

“I think O’Sh is himself. He was a hard-nosed player, middle linebacker. Orlondo…not that he wasn’t hard-nosed, but he was a really smart player who got guys into the right positions and was very cerebral.

“I think that’s what differentiates great coaches from coaches that maybe aren’t, is that bad coaches don’t have an identity that they can that they can pass on to their players and their team. If you look at the Winnipeg Blue Bombers they have taken on O’Shea’s personality and I think if you look at the Hamilton Tiger-Cats and the culture that Orlondo has built, the same thing can be said. They have taken on the personality of their head coach.

“I think that’s what coaching is all about, is getting people to believe the way that they’re all together, all believing in the same thing. Because of their authenticity, they’re able to do that.”

What will be interesting about that coaches conference on Wednesday is that it will probably be the most engaged and animated O’Shea will be with the media this entire week. As different as he and Steinauer are, the former teammates and Argo coaches share a deep bond.

“They’ve been through a lot together and they have a great amount of respect for each other.”

Their former boss quickly shifts from he respect and appreciation angle to a game-week mentality.

“I can promise you this, that this week neither one of them cares to even think about the other one,” he said.

“There won’t be any feelings of sorrow for the one who loses from the one who wins, I guarantee you that. They’re ultra competitive and that just adds to the intrigue of this football game.”

It’s been an interesting year for Barker, who spent the 2018 season working on the CFL on TSN’s panel. He joined the Ticats’ football ops group as a consultant in January and shifted into an offensive assistant role when June Jones left for the XFL in April.

Helping offensive coordinator Tommy Condell and working with players has been a refreshing change for him.

“My favourite years coaching were as a coordinator back in Montreal when we won (the Grey Cup) in 2002,” he said, calling the years he worked under Don Matthews the funnest of his career.

“That’s come back this year,” he said.

Taking part in his fifth Grey Cup week, you can bet that the same competitive nature that courses through the veins of O’Shea and Steinauer runs through Barker’s. He’d love to help the Ticats end their 20-year Grey Cup drought, even if Winnipeg’s stretch without a Grey Cup win runs eight years longer.

“This game carries carries a lot more than just (being) the Hamilton Tiger-Cats playing the Winnipeg Blue Bombers,” he said.

“That to me adds to the intrigue of the whole thing.”