Accuracy Grades: Who was on target in the Division Finals? 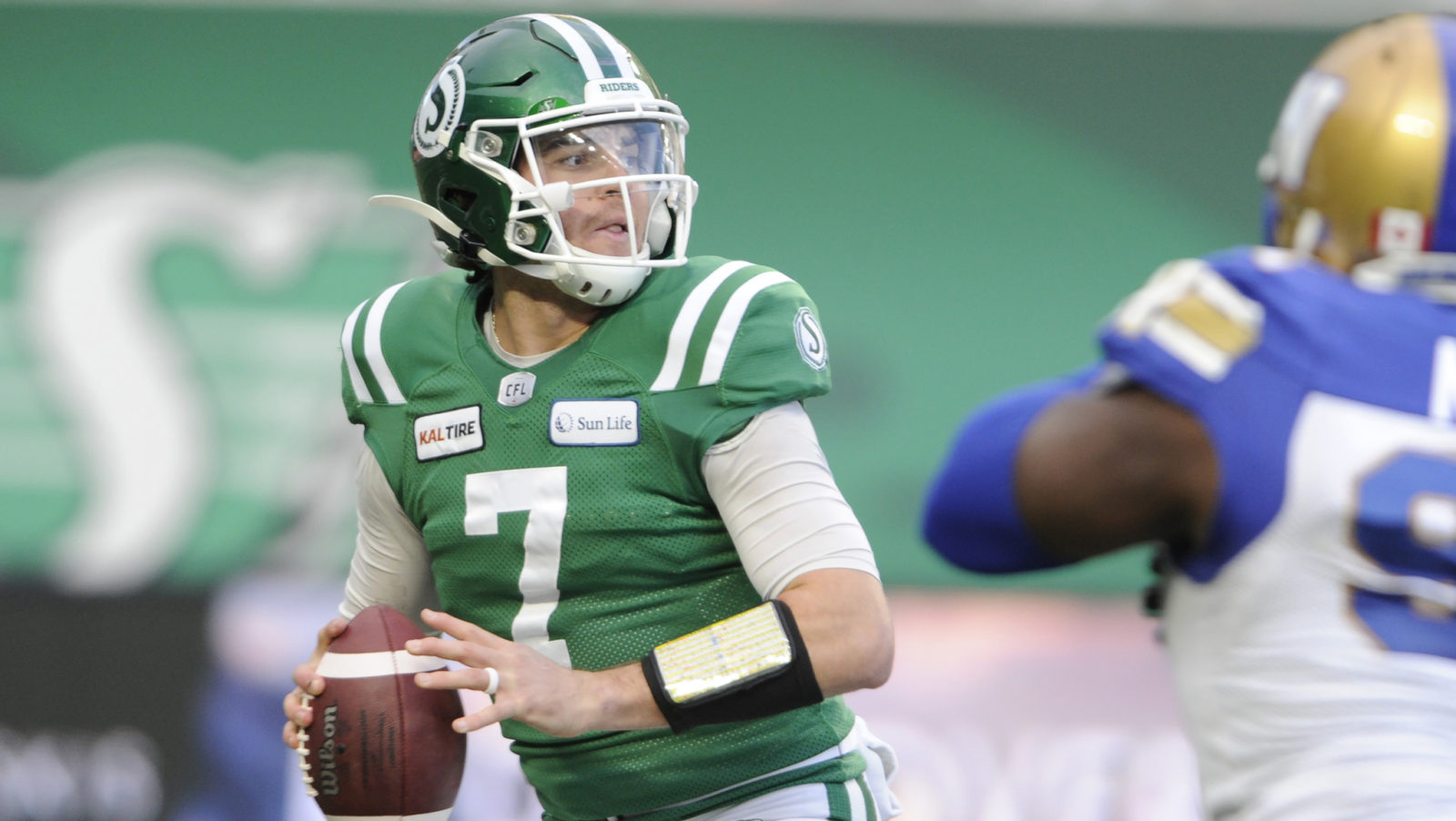 Accuracy Grades: Who was on target in the Division Finals?

The Shaw Road to the Grey Cup continues and we finally know who the marquee matchup will be at quarterback on Grey Cup Sunday.

What a tangled web we weave to have Zach Collaros and Dane Evans ready to take the games grandest stage.

Before a preview of the 107th Grey Cup presented by Shaw, let’s take a look back at Division Championship Sunday:

The lone man left off the podium was actually the CFL on TSN’s standout player from the Eastern Final in Hamilton. Dane Evans didn’t complete a high percentage of passes in his playoff starting debut and was dangerously off the mark a handful of times, but when the Ticats needed a play he was able to deliver. He delivered a couple beautiful touch passes through the middle of the field to receivers Bralon Addison and Brandon Banks. 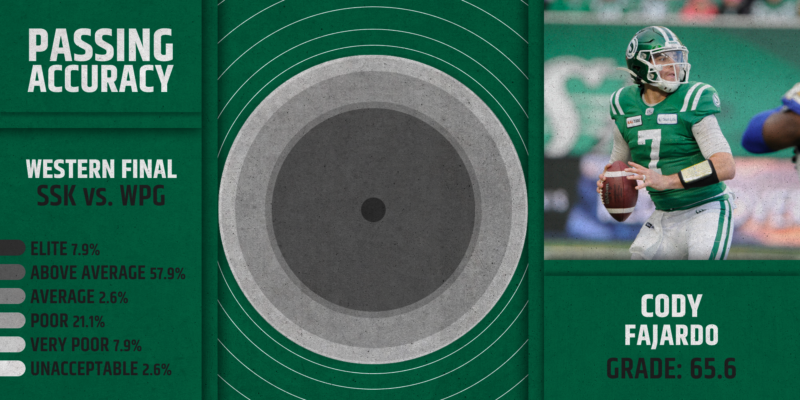 Cody Fajardo had an injury so obscure and rumoured that the TV guys had to pull out a virtual crash test dummy to educate the nation on where the hell to find an oblique. Fajardo battled through it while refusing to slide on runs and sacrificing himself for blocks on the odd running play despite being rushed back from a 4-6 week injury in just 18 days.

Fajardo had 7.9 per cent of his passes qualify for ‘elite’ status and was COOKING in the second quarter, but just couldn’t make the throw to win the game despite being given life after life by a Bombers defence that refused to end the game, keeping us all locked to our screens until the clock finally read zero. 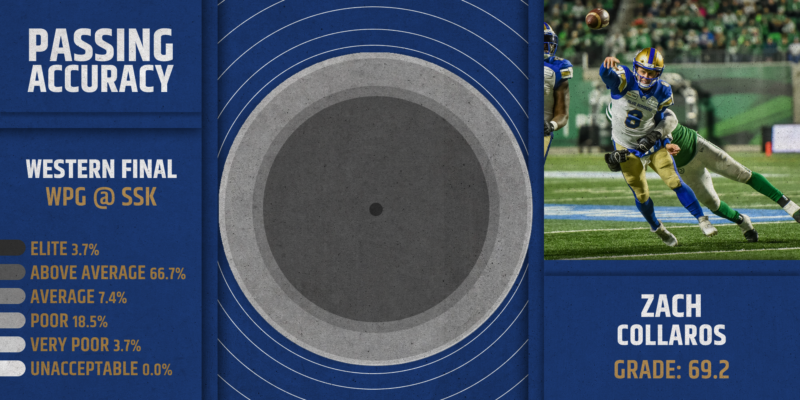 The revenge tour is officially on.

Lose to the Stampeders in the 2014 Grey Cup? End their season.

Get traded away from Saskatchewan after just a season and a half? End their season.

Play the team you gave MOP caliber play in 2015 before an ACL tear and another trade? Why not.

That is the weird and wacky journey of Zach Collaros this year. Al that matters to him now is playing at a high enough level to be crowned Grey Cup champion ‘For The W.’ Watching a fresh, healthy and rested Zach has been a breath of fresh air in the last two weeks and I can’t wait to see what he has in store on Sunday.

Despite not having a single pass qualify as ‘elite’ in the accuracy department, Harris just simply doesn’t make many mistakes and produced a target graph extremely reminiscent of the 2018 Eastern Final with Ottawa against Hamilton.

This time around, the Ticats did not give up six touchdowns and WERE able to pick Harris off twice and that is a big reason why they’re headed West for the Grey Cup, while Harris travels the same route to pack his bags for another long off-season following playoff defeat.

Here are the updated season standings with only the Grey cup to go: 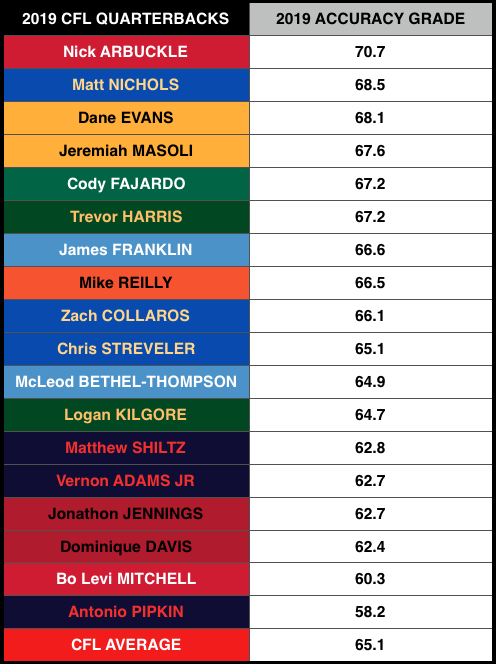 Collaros jumped from 12th to ninth after this week’s performance, hopping ahead of his two-headed monster partner Chris Streveler.

Meanwhile, Ticats QB Dane Evans fell one spot to third behind Bombers QB Matt Nichols and barely ahead of teammate Jeremiah Masoli, who appeared very hands on in helping Dane navigate the Eastern Final on Sunday.

Cody Fajardo held strong at fifth, the same position as the last couple of weeks, while Trevor Harris bumped up his season grade by 0.2 finishing at 67.2 on the year, tied with Fajardo.

The real headline here is that Dane Evans has one game left to claim the overall season accuracy title as the two men above him are either injured or not playing.

Can he do it? Even if every throw qualified as ‘elite’ (a certain impossibility), Evans season score could only reach 70.3. With Calgary’s Nick Arbuckle sitting at 70.7 from his extended run as Calgary’s starter this season and Matt Nichols done for the year, that means Arbuckle is the 2019 accuracy king!

An unexpected result, but what has been normal in 2019.. Now time to find out what surprises Evans and Collaros have in store for us in the game we’ve been waiting for patiently all year.

Collaros and Evans, just like we all predicted back in June.