For Chris Van Zeyl, life in black and gold couldn’t be better, even if after a full regular season in Hamilton, the uniform he wears still makes him do a double-take now and again.

The 11-year vet had one of his best seasons ever in 2019, and the age of 36, has found re-birth in Hamilton after a stellar career up the highway in Toronto.

The six-foot-six McMaster University grad will be a key part of any success the Ticats offence has when it takes on the Winnipeg Blue Bombers’ defence, on Sunday, in the 107th Grey Cup presented by Shaw.

“Every once in a while I find myself pinching myself ‘cause I’m wearing yellow and different colours, and I found that throughout the season,” admitted Van Zeyl, a few moments after the Ticats had finished up Wednesday’s practice.

RELATED
» Head to Head: Who has the edge in the Grey Cup?
» O’Leary: 5 storylines to keep an eye on
» Landry: Snowy GC arrival doesn’t cloud Ticats’ vision
» Grey Cup Game Breakers: 10 names to know for Sunday

After ten seasons in the double blue of the only pro team he’d ever played for – the Toronto Argonauts – Van Zeyl was released on the eve of training camp, only to be snapped up by what had formerly been his most hated foe.

It couldn’t have worked out better for both the player and his new team.

While the Argos suffered through a brutal, four-win season, Van Zeyl settled in smoothly with the Ticats, locking down an already very good offensive line with his usual top-shelf work at right tackle, helping power an offence that skipped pretty well zero beats when quarterback Jeremiah Masoli was injured and back-up Dane Evans took over.

Along the way, the native of Fonthill, Ontario secured the East nomination for Most Outstanding Offensive Lineman, something that had head-scratchingly eluded him during his decade as an Argo.

From day one as a Ticat, Van Zeyl fit in perfectly, according to head coach Orlondo Steinauer, impressed from the get-go.

“When he showed up,” said Steinauer of Van Zeyl, “he showed up with no expectation. He just showed up to work hard. He didn’t expect to be a leader. He was leading by example.”

“He didn’t feel entitled to anything,” continued Steinauer. “And I think when you do those type of things, that’s easy to follow.”

And follow Van Zeyl, a two-time Grey Cup champion while with the Argos, the Ticats have.

That wasn’t really a conscious choice by Van Zeyl, who was appreciative that the team embraced their former arch-rival with open arms. Just something he felt naturally inclined to do, is all.

“Over the years, you learn from both your peers, your teammates and coaches that you want to do it a certain way,” he said of his well-established commitment to team and technique.  “I want to be the guy that, that when they put on the film and they show it to whoever, they say that guy plays the game the right way.” 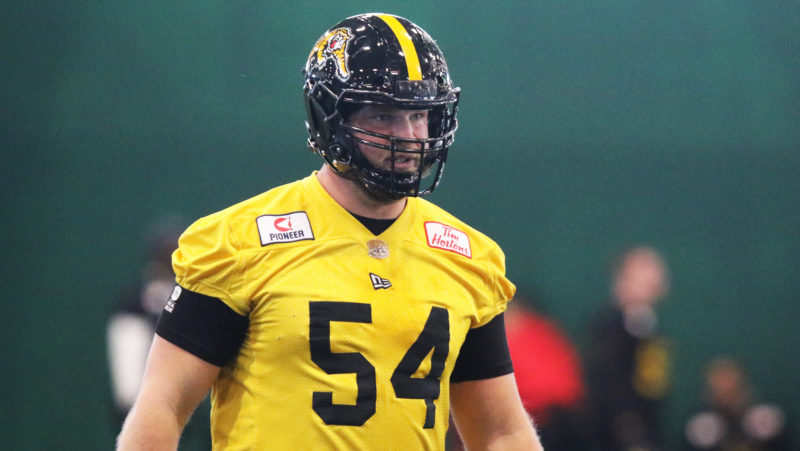 Van Zeyl has been nominated for the league’s Nissan Titan Most Outstanding Offensive Lineman (Dave Chidley/CFL.ca)

For Steinauer, Van Zeyl’s on-field abilities and lunch bucket work attitude were abundantly obvious. He believes that, as well, the veteran has added value to the Ticats’ chemistry in ways that are kept just between players.

“I think the other thing that shows up is what I don’t know about as a coach,” said Steinauer. “It’s the things in the locker room, the bonding. It’s the daily interactions of a professional like that. He brought a lot of those things to our football team.”

If the Ticats have reaped the benefits of having Chris Van Zeyl on the line, it has been a mutually beneficial relationship, and he seems equally as thankful that he has been able to continue playing the game he loves. In fact, toiling alongside the likes of Brandon Revenberg, Mike Filer, Darius Ciraco, and Ryker Mathews has, he says, made him even better. He appreciates the opportunity.

“They just let me come in and play my game (with) some elite talent,”

Van Zeyl said. “You want to elevate your game to play with them and every day I came to work to try and play up to the standards that I believe they deserve.”

There has been more than just a new football team rejuvenating Van Zeyl in the twilight of his career. He and his wife, Kimberley, welcomed their first child ten months ago, in the first and by far most important change in his life this year, the release by the Argos ranking well back.

Young Colton has altered his parents’ lives, of course, and Van Zeyl is slowly but surely piecing together existence as a football-playing father.

“You gotta find balance in your life and I’m still working on finding a perfect balance,” he said.

If the man known for his salty ways on a football field is accessing his softer side off it, that won’t affect who he is between the stripes, however. An energized Van Zeyl might mean he is even more animated when it comes to sticking it to the opposition, both verbally and physically.

“You can be humanitarian, anytime off the football field,” he said with a smile.

“I’m one of those gritty guys,” he continued, with a shrug. “You would probably call me a prick if you’re playing against me.”

The Ticats always did, that’s for sure. But that was then.

This is now, and Chris Van Zeyl will aim to be the veteran leader this Ticats team needs to put it over the top on Grey Cup Sunday, even if the colours he now wears can still throw him off just a bit, after such a long tenure in the blues of Oxford and Cambridge while with Toronto.

“Know what? It’s obviously a little surreal,” he said, glancing down at the all-black practice get-up he was wearing.

“But this team is incredible,” he said.