Harris, Bighill back in the big show eight years later

Harris, Bighill back in the big show eight years later

After thinking it would be so easy, Adam Bighill and Andrew Harris now better understand how hard it is to play in another Grey Cup game.

Bighill and Harris were teammates on the BC Lions team that beat the Winnipeg Blue Bombers 34-23 in the 2011 Grey Cup at BC Place Stadium.

Harris, the Winnipeg native who was in his second year as a Lions’ running back, was named the game’s top Canadian after rushing for 65 yards and a touchdown on 10 carries. Bighill, a bruising rookie linebacker who played at Central Washington, had a special teams tackle.

It’s taken eight years but Bighill and Harris will compete for another championship when the Bombers face the Hamilton Tiger-Cats Sunday in the 107th Grey Cup presented by Shaw played at Calgary’s McMahon Stadium.

“I was talking to a couple of guys about how hard it is to get into this game,” Harris said Wednesday prior to the Bombers’ practice. “That week for me blurred by so fast. I’m definitely enjoying it a lot more this time.”

With Travis Lulay at quarterback, receivers like Geroy Simon and Paris Jackson, and the tandem of Bighill and Solomon Elimimian at linebacker, the Lions looked primed for a long run of success.

RELATED
» Head to Head: Who has the edge in the Grey Cup?
» Ferguson: Calculated risks carrying Bombers, Ticats to success
» Morris: Bombers cherishing every moment on road to Grey Cup
» Grey Cup Game Breakers: 10 names to know for Sunday

BC led the CFL in 2012 with a 13-5 record and looked headed to a second consecutive Grey Cup appearance but lost the Western Final 22-18 to the Calgary Stampeders.

“We found a way to narrowly lose that game,” Bighill remembered with a wince. “You understand how quickly these things can change and how things can be taken away from you.”

The Lions have played in one Western Final since, losing in 2016 to Calgary.

“You realize that even though there are nine teams (in the CFL) it’s tough to make the Grey Cup,” said Bighill, 31. “It’s tough to win a championship. That’s why it’s so special. Not everyone gets on opportunity to do that.”

The Bombers will be looking to win their first CFL championship since 1990.

At 32 years old, Harris understands his chances of sipping champagne from the Grey Cup are dwindling.

“You appreciate it a lot more,” he said. “You realize how hard it is to get here.”

Bringing a title back to his hometown would also help Harris erase some of the frustration and humiliation he felt after receiving a two-game suspension in August for testing positive for an anabolic steroid.

At the time Harris said he was “in shock and disbelief” over the result and claimed, “I have not and would never cheat.”

Harris was asked Wednesday if a Grey Cup win would help him make a statement about the suspension.

“Of course,” he said. “I want to get a ring on my finger. That’s all that really matters to me.”

Winnipeg finished third in the West with a 11-7-0 record. They advanced to the Grey Cup with road victories over Calgary and Saskatchewan. 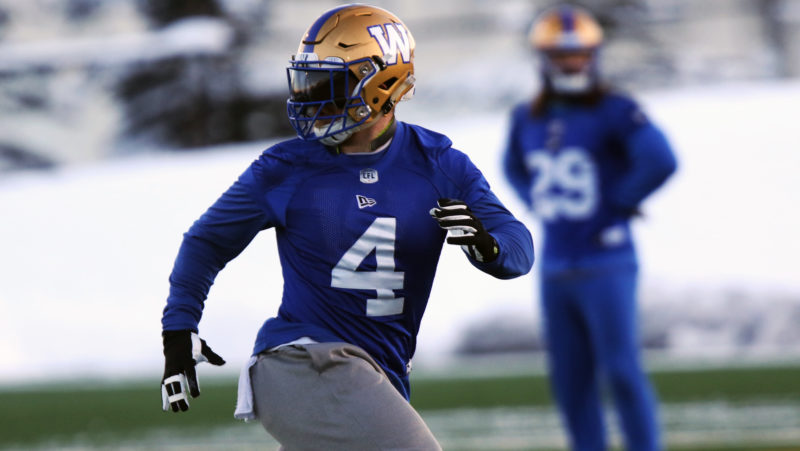 Adam Bighill is back in the Grey Cup eight years after winning in 2011 with the BC Lions (Dave Chidley/CFL.ca)

“They are in a class of their own when it comes to running their offence,” he said. “No other (team) in the CFL employs the same style of offence.

“They have unique players that came make it run. You really have to study and understand the unique differences.”

Harris and Bighill have both established themselves as stars in the CFL but took different routes to settling in Winnipeg.

After 2012, Harris spent three more years with the Lions before returning home to sign with the Bombers in 2016. He’s had three consecutive 1,000-yard seasons, was named the league’s Most Outstanding Canadian in 2017, and been selected a CFL All-Star five times in his career.

This year Harris won his third consecutive rushing title, collecting 1,380 yards on 225 yards in 16 games. He led all rushers with 10 runs of 40 yards or more yards. He also finished the year with a career-total 9,038 yards, the most by a Canadian in the CFL, breaking the record of 9,022 set by Hall of Famer Norm Kwong over a 13-year CFL career.

At five-foot-10 and 216 pounds, Harris combines quickness with power. He can break out of a tackle, then use his speed to distance himself from anyone trying to catch him.

“He’s relentless in his approach,” said Winnipeg head coach Mike O’Shea. “He’s got a certain grit and determination you don’t often see (and) you’d like every player to have.

“When a player gets to this level and has accomplished what he has accomplished, there obviously is something more there. He does carry a pretty big chip on his shoulder. I love everything about the guy.”

Bighill spent six years in BC. After a one-year stint with the NFL New Orleans Saints he returned to the CFL and signed with the Bombers.

This year had had 62 tackles, four sacks and two interceptions in 15 games. Over his career Bighill has recorded over 100 tackles in a season three times, been named the league’s Most Outstanding Defensive player twice and a CFL All-Star five times.

O’Shea, a former linebacker himself, heaps praise on Bighill, who plays much bigger than five-foot-10 and 223 pounds.

“He’s very cerebral,” said O’Shea. “When he gets out on the field, he wants to be a savage. That’s a wonderful combination for a CFL linebacker.

“He has the combination of size, speed, strength. He is extremely smart and takes a lot of pride in studying the game.”

For Harris, ending the long Grey Cup drought for his hometown has special meaning.