The worthy combatants? The University of Calgary Dinos and Université de Montréal Carabins.

Somewhat shockingly based on their recent success at the national level this decade, Saturday will be the first head-to-head matchup of these two proud programs EVER.

Montreal will have the home advantage, in theory, as they return to their last great triumph, a 25-10 Dunsmore Cup victory over their nemesis, and RSEQ dominating partners in crime the Laval Rouge Et Or.

In 2014, the Laval fans showed up in droves cheering for McMaster at a Vanier Cup held in Quebec as the French fans adopted Edmonton’s classic ‘ABC’ strategy for Grey Cups: Anybody But Calgary. 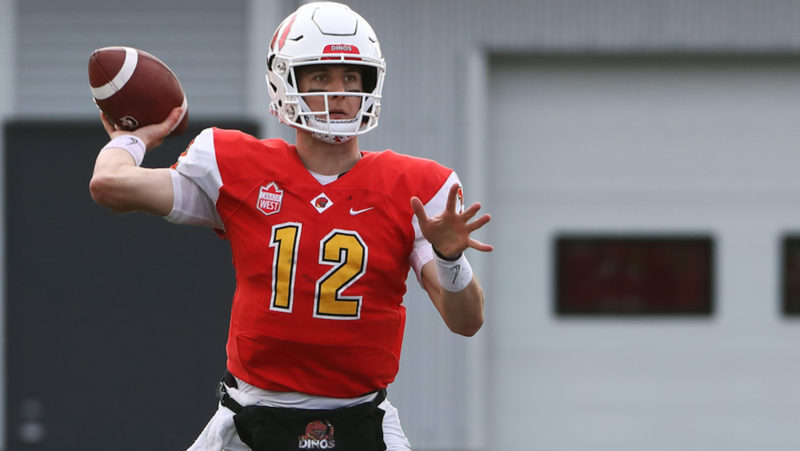 Adam Sinagra will look to lead the Calgary Dinos to a Vanier Cup championship (Photo: USPORTS)

That same mentality could apply to those making the drive from Montreal Saturday to Telus Stadium.

Montreal has a unique quarterback situation to say the least as their starter, Dimitri Morand, played the extent of the regular season before getting replaced by Frederic Paquet-Perrault who won the Dunsmore but was pulled during the Uteck Bowl in Wolfville, Nova Scotia last week in favour of Morand, who lit a fire under the stagnant offence en route to a blowout 38-0 win over Acadia.

The Carabins real strength is their depth at running back and their ability to affect opposing passers, both of which will need to cash in Saturday if they want to take down the mighty Calgary Dinos.

Calgary is led by 2018 Hec Crighton trophy winner and Lieutenant Governor Athletic Award finalist, quarterback Adam Sinagra of Pointe-Claire, Quebec who has that special mixture of talent and leadership you need to win a Vanier Cup.

He is surrounded by elite receiver talent and the ever-physical ground attack that has seen numerous Dinos reach and star in the CFL’s trenches.

The Dinos and the Carabins! There can only be one champion of USPORTS football in 2019 but with two deserving teams full of CFL prospect talent and elite coaching we have the makings of another classic.