The Day Before: GC Staurday Quote Board 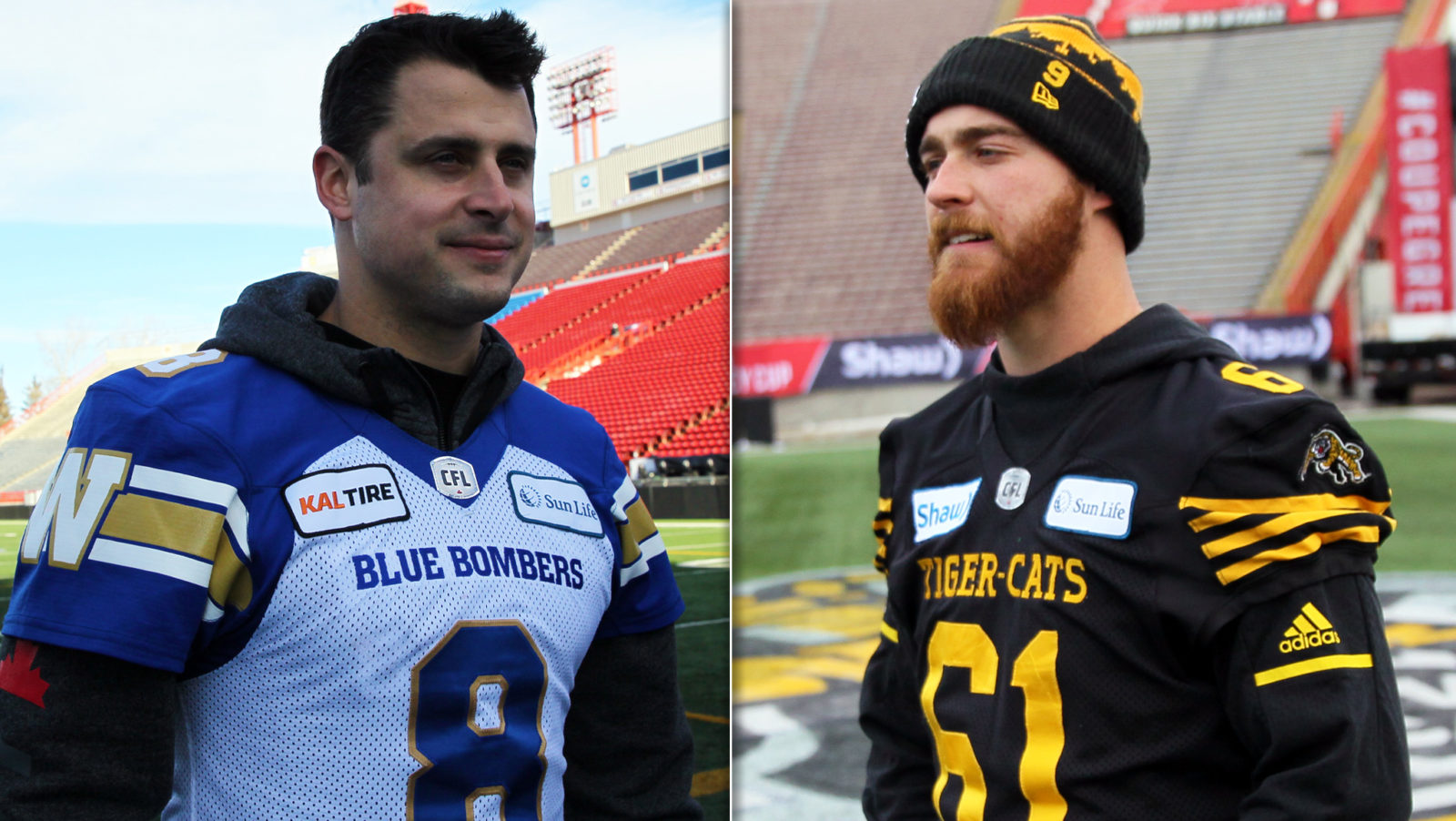 The Day Before: GC Staurday Quote Board

CALGARY — We’re a day out from the 107th Grey Cup presented by Shaw, and with the Hamilton Tiger-Cats and Winnipeg Blue Bombers set to do battle at McMahon Stadium, each squad took the field one last time

Each team did their respective walkthrough before speaking to the media ahead of the championship game.

Head coaches Mike O’Shea and Orlondo Steinauer each spoke. As for the players, Zach Collaros, Andrew Harris, Adam Bighill, Winston Rose, Dane Evans and Simoni Lawrence were all at the podium on Saturday. 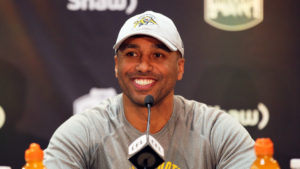 Head coaches Mike O’Shea and Orlondo Steinauer, as well as players from both the Hamilton Tiger-Cats and Winnipeg Blue Bombers, spoke to the media on the eve of the 107th Grey Cup presented by Shaw.

“We huddle up before every series and we bring it back to reality. ‘Hey, it’s time to make a play, who’s going to step up? Here’s the situation, here’s the call.’ We re-focus up and everybody in that huddle is on the same page. Let’s stand up together. That belief that everybody in the huddle is pulling the rope in the same direction, that brotherhood, that’s special to me. Being able to answer the bell when you’re being called upon for your teammates. I’ve enjoyed building that bond with my teammates and I have the ultimate faith in these guys.”

– Adam Bighill on the tight-knit defensive group on the Bombers

“In 2011 I didn’t really realize or appreciate how difficult it is to get in these games. Representing my city that I grew up in, how excited everyone is back home. The sense of pride that a community has for our team. It’s massive.”

– Andrew Harris on making it back to the Grey Cup

“I’m a bad sleeper, I’ve never been a good sleeper. Hopefully, my head hits the pillow and I’m falling asleep . . .”

– Zach Collaros on trying to get sleep the night before 107GC

“He’s one of the best the CFL has ever seen. I do believe that he is one of the big reasons why field goal kicking has become so excellent across the league, the amount fo work he puts in with the operation and the guys around,t eh snapper and the holder, even protection, he’s always talking to his guys. You’ve seen that now that he’s been around and kickers, the preparation level is at an all-time high. Lirim’s excellent also. I think both teams would be confident in trotting out their kicker to win the game.”

– Mike O’Shea on his confidence in Justin Medlock

“I just felt Winnipeg was like family to me. How the coaches embraced me, the players. For the first time in my career I felt the love from the organization and the city and every week I would post and say tune in, watch God work and fans would write me back and just encourage me. That means a lot to me. Just to have that family vibe from the community, from Winnipeg makes it even more for me to go out there and go hard, especially when we play at home, I just love the energy the fans bring.”

– Winston Rose on his decision to join the Bombers 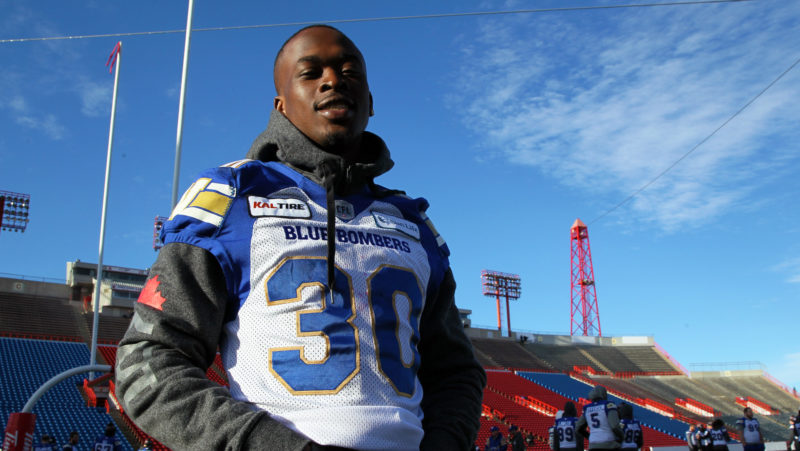 Winnipeg Blue Bombers defensive back Winston Rose poses for a photo at the team’s walkthrough ahead of the 107th Grey Cup presented by Shaw. (Dave Chidley/CFL.ca)

“If they don’t score, they don’t win. If we don’t give up explosive plays, they don’t get in position for field goals or singles and all those kinds of things. If we play a clean game, limit our penalties, limit explosives, we’re going to give ourselves a fantastic chance to win this game. You look at championship teams, defensive stats, NFL, CFL, you’re looking at some of the top defences in all categories. To me, defences do win championships.”

– Adam Bighill on whether defences do win championships

“It matters a lot to me because I do play this game for the love of the game, what it’s given me, I want to build a legacy for myself. With that being said, I also play for the fans because I know how much they appreciate it. If you’re in Winnipeg for more than one day, they tell you how much they appreciate what we do and they bleed blue and gold. I play for them too, and I want it so bad for them. That’s part of the reason I signed in Winnipeg – I love the atmosphere, I love the dedication . . .”

– Adam Bighill on possibly bringing a title back to Winnipeg

“Everything. There’s a lot of people invested in this and there would be a lot of happy people, let’s just put it like that — that’s an understatement. A lot goes into it, and I mean that with all the sincerity. I tried to cover all the bases when I was fortunate to be voted the Coach of the Year. It’s really not about me; it’s about the city, it’s about the ticket salespeople, the janitors, the bus drivers. It’s all the little things, the people that no one pays attention to. They pay attention to the three hours on gameday but there’s so much that goes into it. So, go back to the first word: everything.”

“It hurts a lot. I know the feeling of losing in the Grey Cup. It’s all the training, this is what you want to do. This is why you train, this is why you work so hard at practice, this is why you go through what you go through. Just to win this game. It’s one of those feelings that’s hard to get out until you win. It’s still in my heart and it still hurts. I feel like the only way to be able to remove that feeling is to win one with my teammates.”

– Simoni Lawrence on losing the Grey Cup in 2014

“I was looking forward to it being a little colder. It hurts a little more when you hit people and it’s cold.”

– Simoni Lawrence on the forecast for Grey Cup Sunday

“Luke is the ultimate football player. There’s not one thing on the field that he can’t do. What’s awesome about Luke is that he has had a difficult and tough year on a personal level, but he was getting after it in the training room and the weight room trying to get back with us. You can even see in the middle part of the season when he wasn’t there — highlights — where he was the first person mobbing whoever just scored, coming off the sideline. He’s all about the team; he’s a team-first guy and in the huddle, he’s just like having another quarterback. Luke knows every position and he can do everything you ask him to and its awesome to have that.” 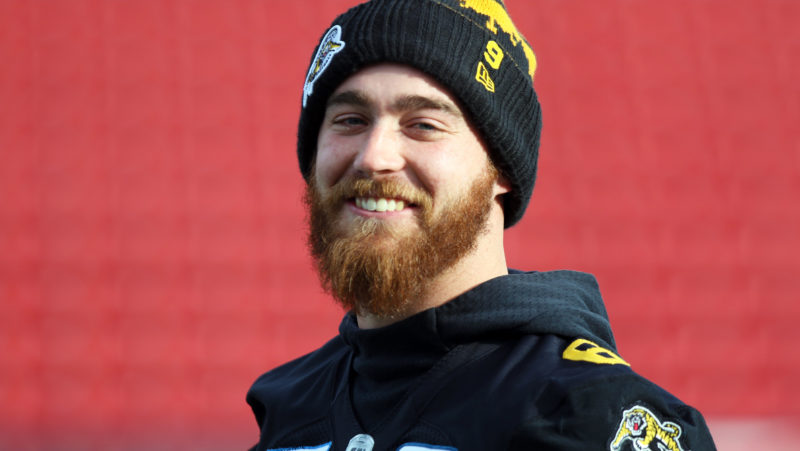 Hamilton Tiger-Cats quarterback Dane Evans has a laugh at the team’s walkthrough ahead of the 107th Grey Cup presented by Shaw. (Dave Chidley/CFL.ca)

“The first thing we work on in the sense of being a Tiger-Cat is finding a way to bring everyone together as fast as possible and get everybody on the same page. I’ve noticed that back in 2013 and 2014 when coach Orlondo was my defensive coordinator, that’s all he did. Get us together as fast as possible and that’s why we always had dominant defences.”

– Simoni Lawrence on welcoming new faces into the locker room.

“With JG, he fits in perfectly because he’s such a good person. He’s easy to get along with, he’s a great football player, and he’s not selfish. He comes up and asks you about your family and how they’re doing. He fits in the locker room perfectly.”

“Andrew has proven time and time again that he can be a game disturber, and if you don’t pay attention to him and wrap up, he’s strong and runs hard. They do a good job of giving him the ball in some good situations. When you make it to a game like this, those are the challenges you want. It’s the best versus the best in 2019 and we’re excited for that challenge.”

“I think I’d be lying to you if I said it didn’t bother them all and it hasn’t crossed their minds, but it is in the past. …We’ve shown it to the team — that punt-return penalty — and it didn’t matter what we thought or not, they threw the flag. So that’s really the only address we’ve made to the past. For those guys (that played in the game), they’d be better to ask. For the people that weren’t here, they’re not aware of it. I know that, should things turn out in our favour tomorrow, it would be very sweet for those who had to endure that pain. I’ve eluded to it before, but ABC Wide World of Sports had it pegged: The thrill of victory and the agony of defeat. I’ve done both and that’s very accurate.”

– Orlondo Steinauer on the players thinking about the 2014 Grey cup defeat; winning the 107GC