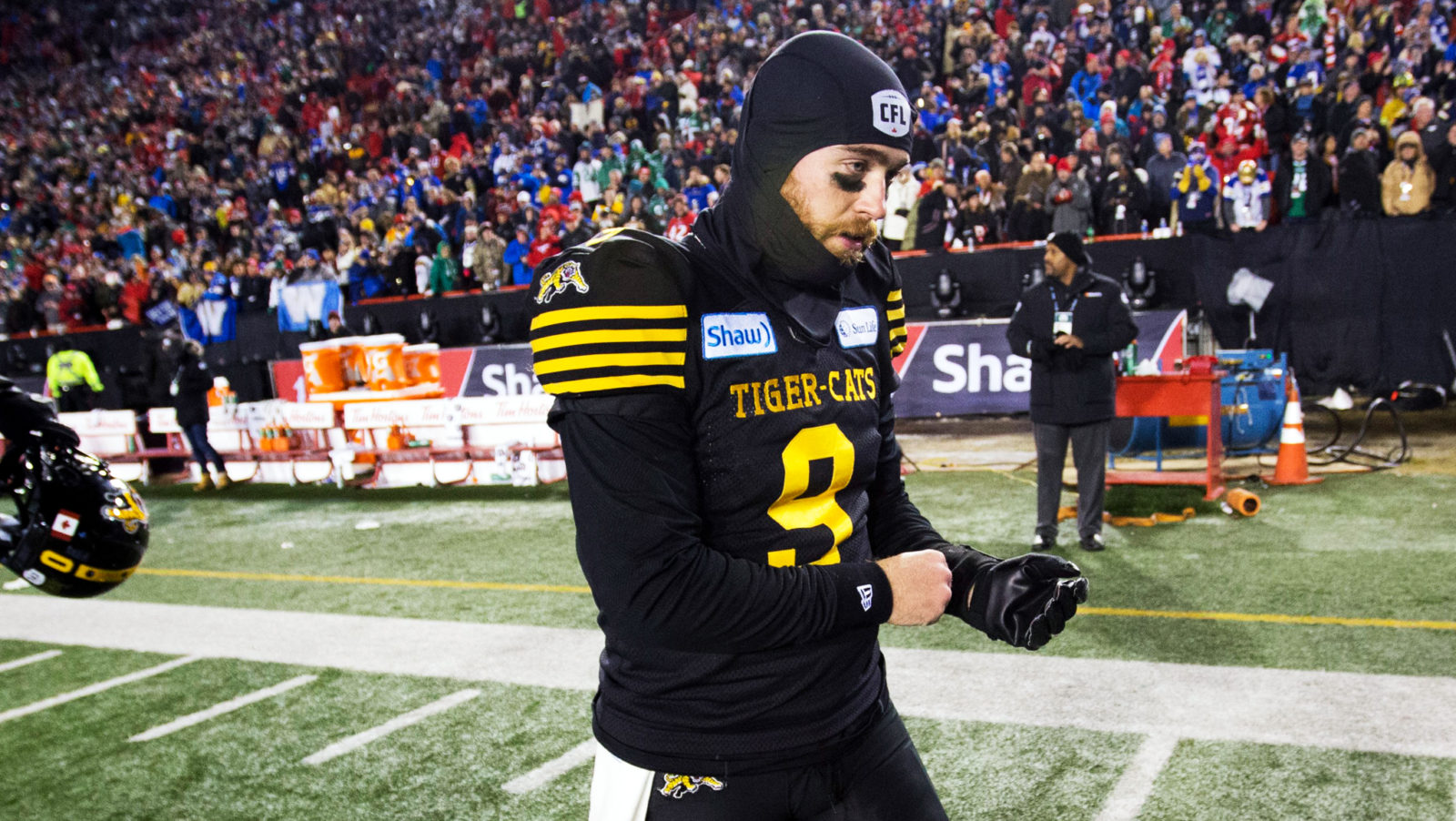 It was a Grey Cup Game that couldn’t have been much more polar opposite to what the Hamilton Tiger-Cats had been experiencing in 2019, a sensational season filled with victories.

The team that just kept on winning and winning and winning, even when their starting quarterback went down with a season-ending injury in July, often pummeling the opposition with full authority, was fed a steady diet of humility themselves.

Or, more to the point, they gorged on it themselves, with early mistakes that set a tone and dug a hole too deep from which to emerge.

And in a quiet locker room after a 33-12 beat down at the hands of the Winnipeg Blue Bombers in the 107th Grey Cup presented by Shaw, the Ticats were lamenting the mistakes they made.

Mistakes that gave the Blue Bombers all the momentum they needed on the way to their first championship since 1990.

“Incredibly enough, that was the worst game that we played all year,” said a soft-spoken receiver Luke Tasker, shaking his head.

“We’re a little shell-shocked,” he continued, and you could absolutely see the agony of that in his eyes.

In a game that saw the Ticats commit seven turnovers, the final four only mattered a little, due to the gut punch of the first three, coming on the first two, and then the fourth Hamilton drive of the game.

The Ticats couldn’t have started much worse than they did, and those ball control troubles were harbingers for what was to come.

On their first possession, Hamilton quarterback Dane Evans fired a ball into the hands of receiver Jaelon Acklin, but the first-year receiver couldn’t squeeze it and Winnipeg defensive back Brandon Alexander made the interception of the deflection.

On their second possession, a marauding Willie Jefferson forced Evans to fumble, with linebacker Adam Bighill making the recovery at the 15-yard line. One play later, Bombers running back Andrew Harris had his first of two touchdowns and the Ticats never did catch them after that.

Hamilton’s fourth possession of the night pulled points off the board for them, as a third and one surge fell short at the Winnipeg 33, marking the first time in 2019 that the ‘Cats had been stuffed on third and short, in twenty attempts. 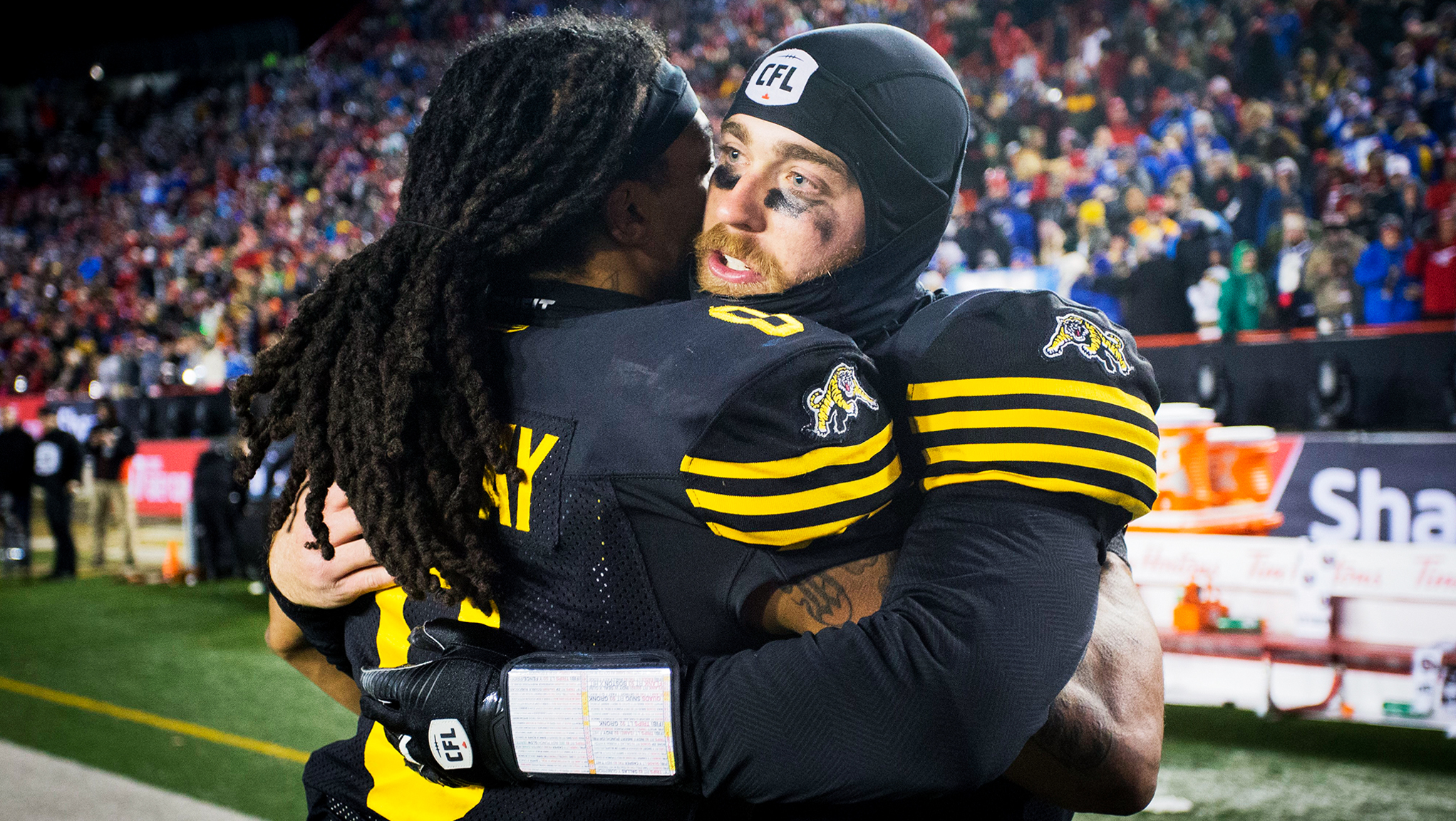 QB Dane Evans and DB Rico Murray console each other on the sidelines before heading ot the locker room as the losing team in the 107th Grey Cup presented by Shaw (Dave Chidley/CFL.ca)

Turns out, they’d be denied once more in that kind of situation, when they threatened in Winnipeg territory again, only to be stopped short of the forward marker at the 25-yard line, during the third quarter.

You get the picture.

Still, the Ticats had a chance to climb back into it, when Evans fired a perfect bomb strike to receiver Mike Jones at the Winnipeg eight-yard line, early in the fourth quarter. They trailed, 27-12 at that time, and a bomb deep into Winnipeg territory appeared that it would things interesting.

However, Hamilton’s Mike Jones couldn’t squeeze the ball as Winnipeg defensive back Mike Jones took a swipe as the two of them fell to the field.

That was the kind of play that the Ticats had so often made during the season, and coming on the heels of the news that Most Outstanding Player Brandon Banks was finished for the game with a lower body injury, insult was added to the mix.

It was a night when, incredibly, the CFL’s most dominant team was dominated completely by the underdogs.

“Hats off to Winnipeg,” said Lawrence. “Winnipeg deserves the credit. They deserve to be champions right now. They played great football.  Andrew Harris did a great job. Their O-line did a great job. They owned all three phases. That’s how you win the Grey Cup.”

“We just didn’t play like ourselves,” he continued. “They came out here and they executed better than us. And they played harder. That’s what  happens.”

Big, early mistakes did the Hamilton Ticats in on this night. Funny thing, that, considering that most of the chatter all week long was that the Blue Bombers had to play a near-perfect game in order to win.

They did just that, but it turned out that it wasn’t really necessary.