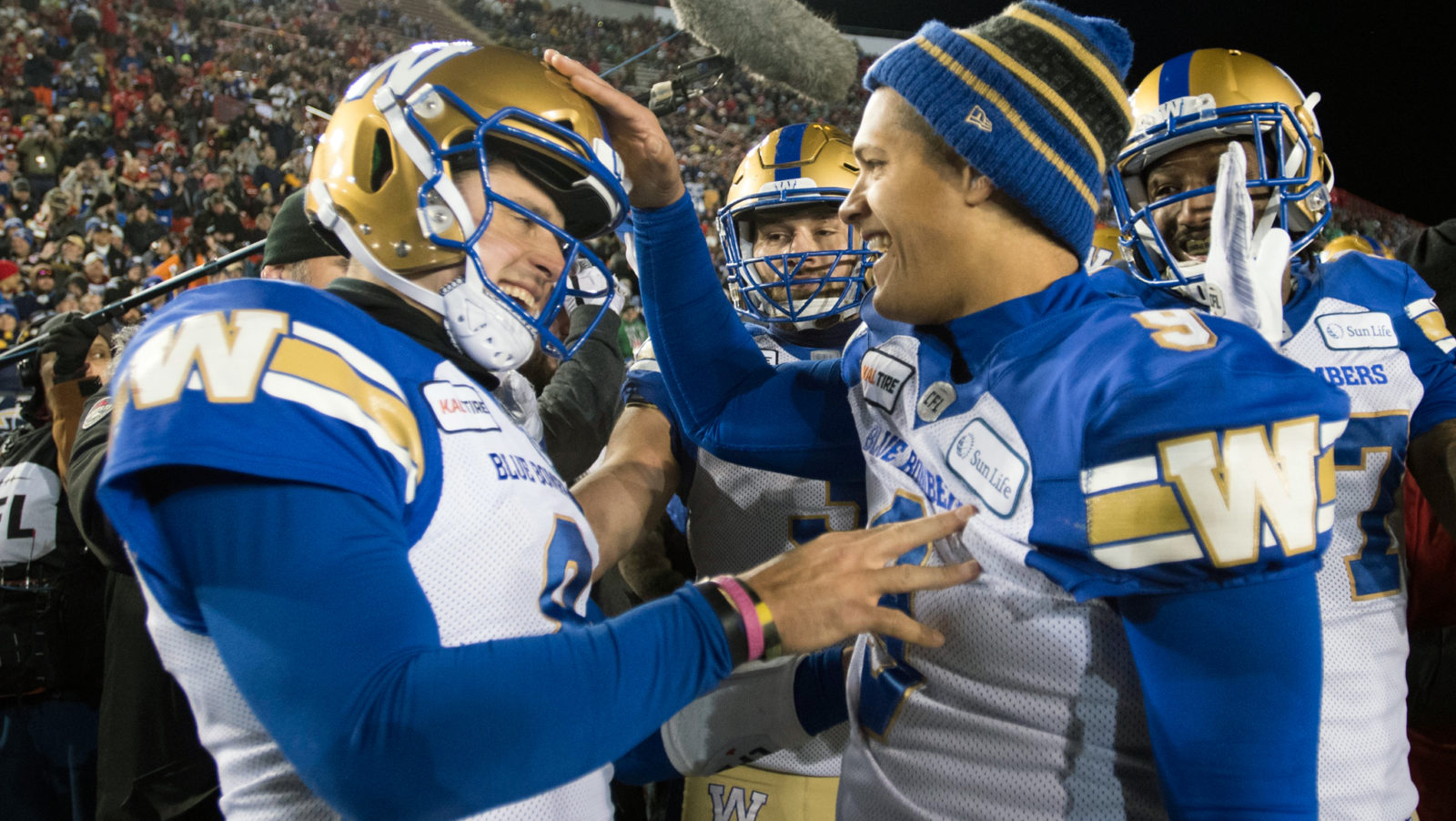 I was thinking of three people in particular while watching Winnipeg win the 107th Grey Cup presented by Shaw on Sunday. It was a redeeming moment for all three of Andrew Harris, Zach Collaros, and Mike O’Shea, albeit for completely different reasons on each front.

You don’t have to squint to understand what this means to Harris, and not just because he’s a Manitoba boy. I would suggest this was one of the toughest seasons of Harris’s career, despite having a career year and winning the CFL’s regular season rushing title. To be suspended two games for violating the league’s drug policy is significant. His performance against Hamilton is a great way to make that memory fade quickly.

I won’t be disingenuous. While I didn’t have a say in whether Harris was eligible for season-ending awards (Most Outstanding Player, Most Outstanding Canadian), I agreed with the decision made by Winnipeg voters to disqualify him. I also agreed with him being the first ever Grey Cup Most Valuable Player AND Most Valuable Canadian. Harris was driven, motivated, and quite frankly, angry, and it all manifested in a positive, dominant way at McMahon Stadium.

Harris signed with the Bombers in 2016 to help bring a franchise back from a dark stretch. For his part, he had already succeeded prior to Sunday’s win, because he had helped turn Winnipeg into a perennial contender. But helping them win a title, and being the driving force behind it, brings it all full circle. Have fun trying to ever buy a meal in your hometown again, Andrew.

I didn’t see this coming from Collaros and I’m elated to be wrong. But, one person who never stopped believing in what Collaros was capable of was, well, Collaros. Through all of what he’s gone through the last few years, Collaros has stayed confident and never wavered in his belief. Looks like he was onto something.

Think of all the adversity he’s faced in the last five years. A devastating 2014 Grey Cup loss followed by a season-ending injury in 2015 robbing him of a likely Most Outstanding Player nod. 2017 saw Collaros lose his job to Jeremiah Masoli while injuries limited his 2018 and, of course, his start to 2019 in Saskatchewan. He wasn’t done, though, and his presence stabilized a Blue Bombers team when it mattered the most.

Does anyone remember how the 2016 season started in Winnipeg, and specifically for O’Shea? General Manager Kyle Walters was aggressive in free agency the winter prior, signing both Harris and Justin Medlock, among others. But a disappointing 1-4 start had things hanging in the balance, specifically for O’Shea in his third year as head coach.

With stories swirling that O’Shea’s job was very much in jeopardy, perhaps with one more loss, the head coach replaced incumbent starting quarterback Drew Willy with Matt Nichols for a Week 6 game against Edmonton. The Bombers rolled out seven straight wins from there, they haven’t missed the playoffs since, and O’Shea’s job has stayed pretty darn secure.

O’Shea has been with Winnipeg since 2014, Harris since 2016, and Collaros since October. Yet all three will be linked together with a Grey Cup win that ended a 29-year drought. And, for every single one, whether it’s outwardly or deep down, Sunday’s win will no doubt serve as the very best kind of vindication.

It was brought up constantly on the telecast, but am I the only one who thinks it’s cool to see the Bombers end a championship drought with a pair of local products driving the bus? Both products of athletic powerhouse Oak Park high school, the aforementioned Harris and Nic Demski were instrumental in the 107th Grey Cup.

Sure, being almost six years apart, Demski and Harris never crossed paths in the hallway during class change. But, if it wasn’t already, they just helped truly put their alma mater on the map on a national level. It’s a school that has seen multiple NHLers go through, but Harris and Demski just helped bring a Grey Cup home to Winnipeg.

A lot is going to be made about Dane Evans and his struggles in his first Grey Cup appearance. In reality, though, the guy didn’t have a chance. With the way the Blue Bombers and their defensive front came to play, the writing was on the wall from the opening snap.

I don’t think it’s recency bias when I say that was the most dominant defensive line performance I’ve ever seen in a Grey Cup. Led by Willie Jefferson’s incredible night (three sacks), the Tiger-Cats had no answer for Winnipeg’s pass rush. Jefferson, Jackson Jeffcoat, Drake Nevis, Jake Thomas, and Steven Richardson were an absolute handful all game long.

For Jefferson, though, this was a career-sealing performance. Awarded Most Outstanding Defensive Player on Thursday, Jefferson drove the point home with an unstoppable Grey Cup outing. Jefferson might be one of the most gifted and freakish athletes the CFL has ever seen, and Sunday put that one display for an entire nation.

This one is going to sting for Hamilton for a while, as they’re now another season removed from their last title in 1999. But for Orlondo Steinauer and his team, they have nothing to hang their heads over. Sure, the final game of the season was an absolute kick in the gut, but at some point down the road, I hope they can feel proud about what was accomplished in 2019.

A first year head coach lost his starting quarterback, and reigning MOP nominee, early in the season. That same head coach saw his legendary offensive coordinator depart just weeks before the season started. And yet, the Ticats put together their best regular season in franchise history. That needs to be remembered.

I’m with Chris Cuthbert when he suggested early 2020 predictions would have Hamilton right back in the Grey Cup. With that defensive group and those playmakers on offence, the Tiger-Cats will enter next season as a team on a mission and with the personnel to accomplish it.

Enjoy the world of wearing pants Chris Matthew! The story made the rounds over the last few days, but the guy pledged to wear shorts until his favourite football team won another title. If you haven’t seen it on the official CFL Twitter, he’s wearing pants now. He even puts them on like us…one leg at a time.

Speaking of legs, one of the greatest the CFL has ever seen finally has a championship. Justin Medlock nailed six straight, crucially important field goals to help the Bombers win the Grey Cup, which is about par for the course. He was just as dialed in on the punting side of things. Now, one of the best punter/kicker’s in CFL history has his Grey Cup ring.

Finally, shout out to the University of Calgary Dinos who won their fifth Vanier Cup, and first since 1995, on Saturday afternoon. The fact this was their fifth trip since 2009 made a 27-13 win over Montreal that much sweeter.