O’Leary: Spiring set to make history as first female on the Grey Cup 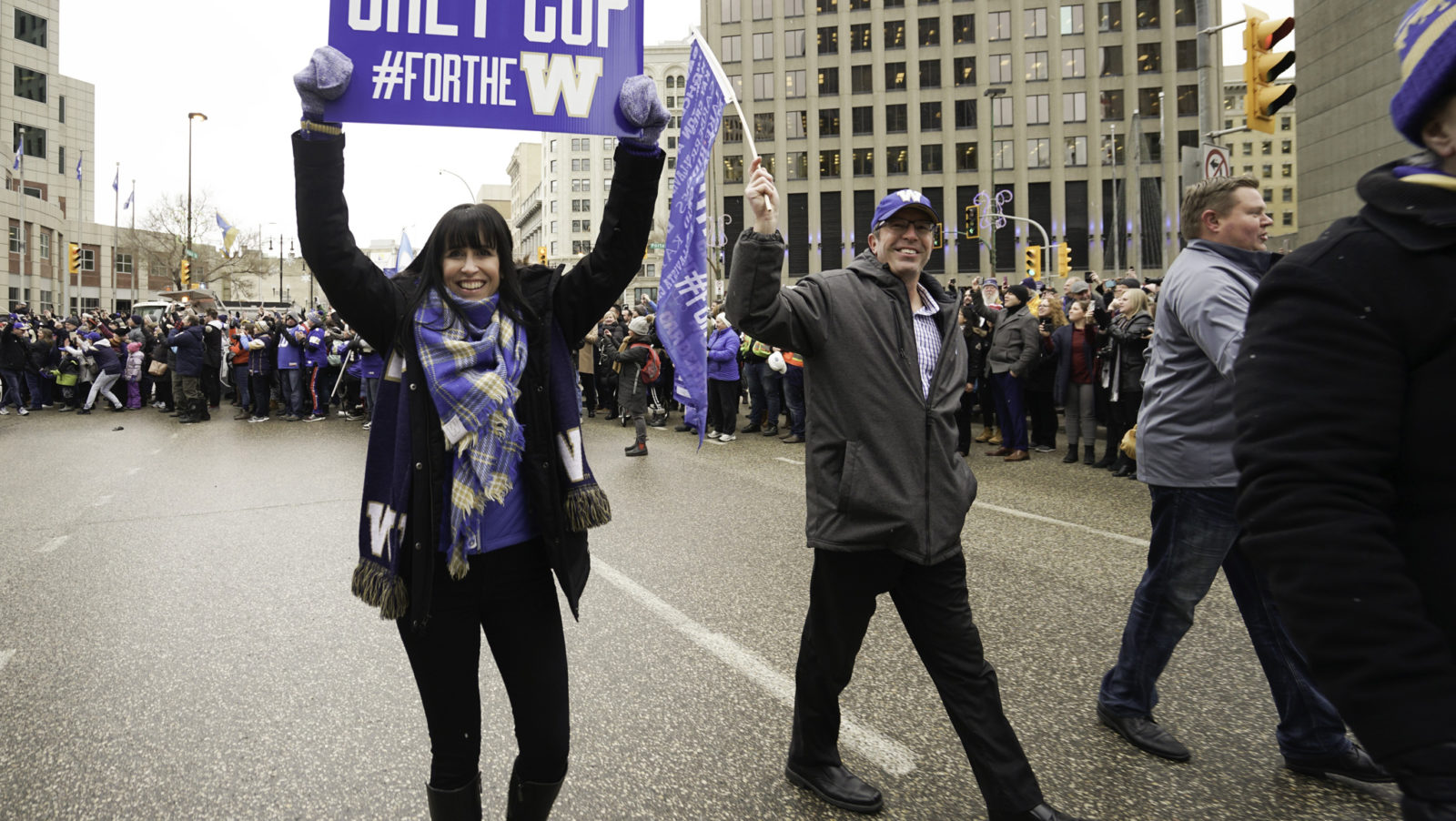 O’Leary: Spiring set to make history as first female on the Grey Cup

It was hard to fully accept it, even though the score was growing more lopsided and the seconds were gradually slipping off of the scoreboard in Calgary.

For Dayna Spiring, that wow-I-think-this-is-actually-going-to-happen moment started to arrive with about four minutes left in the 107th Grey Cup presented by Shaw. Winnipeg led Hamilton 30-12. Some CFL officials came to the Blue Bombers suite and said they should come down to the field.

Spiring, the chair of the Winnipeg Football Club, said it all started to feel surreal when they got to the field level.

“With about 2:30 left we realized it was going our way and it was pretty exciting. You just wanted to be a part of it,” she said, having arrived back in Winnipeg a few hours ahead of the team.

The Bombers are a community-owned team and their board members are unpaid volunteers that get voted in by existing and outgoing board members. It’s the type of job that usually attracts lifelong fans that are willing to put in the hours and work required to collaborate with management on its strategic plan for business, overseeing its implementation.

Sunday night was full of history for the Bombers. Their 28-year Grey Cup drought came to an end. Andrew Harris was named the game’s MVP and Most Valuable Canadian, marking the first time a player had ever done that.

Some more history will come the Bombers’ way when the team has its members names added to the Grey Cup. Spiring, who became the chair of the WFC in January, will be on that list.

She’ll become the first ever woman to have her name on Canada’s most iconic trophy.

Those in the role of chair with teams are traditionally added to the Grey Cup, comparable to private owners.

“I think the world is changing,” she said.

“When I became chair of the Bombers I was one of the first (to do it) in CFL history. That was the first step, for people to see that women, men, whomever can come in and be part of the leadership of the CFL. I think it’s really important to see. Frankly, I’m lucky to be in the right place at the right time.

“I am incredibly honoured that my name is going to be on the Grey Cup, but I’m representing a bunch of people who have been involved with this organization for a very long period of time.

“I’m the lucky one who gets my name on there, but we’ve had some great women as part of our organization for a long time and I think as we continue to break down these barriers and it stops being a novelty and starts being (the norm). It’s exciting and it’s overdue but it’s part of a long journey that a lot of people have been on.”

@SpiringDayna – Chair of the Winnipeg Football Club – will be the first woman ever to have her name engraved on the Grey Cup. So amazing and inspiring. 💙💛@Wpg_BlueBombers @EDWinnipeg pic.twitter.com/HhgKyYuRFz

As she’s built her career, Spiring has paved a road for others to follow. The president and CEO of Economic Development Winnipeg, she has worked as the chief strategy officer and general counsel with the Canadian Wheat Board. She’s a director for Winpack Ltd. and CancerCare Manitoba Foundation and has sat on the boards of Manitoba Hydro and Farmers Edge. She’s also served as the director for Special Olympics Manitoba.

Prior to being named the WFC board chair, she’s spent almost five years with the board.

“I started my career as a lawyer in commercial and securities law,” Spiring said.

“I can tell you, if there’s one industry that has fewer women than the football business it’s the grain business. So you kind of figure that out and you feel your way through.

“I’ve had incredible people and incredible teammates working with me through all of that. The same goes for the Bombers. I have a great board of directors and we’ve got expertise from all over.

“It really stops mattering whether you’re female or male. It’s really about what you can bring to the table. I hope I’m setting a great example and I hope that all girls out there that are watching. They love football, they can be a part of this too. This is a pretty incredible thing. It’s been a pretty incredible week where all of Canada comes together.”

Speaking on Monday afternoon, Spiring said there’s still a level of surrealness to everything that’s happened for the Bombers. In her work with Economic Development Winnipeg, she helped organize rallies for the Jets in their playoff run, so she had an idea of what Tuesday’s parade would look like.

To see the city celebrate a championship for the Bombers, to see its long, painful drought finally come to an end for an organization that she holds dear to her heart is a bucket list item. Or, more appropriately, was a bucket list item. That she’ll have her name forever attached to it on the Grey Cup makes it even more incredible.

“If you would have told me five years ago that I’d be hoisting a Grey Cup I would have thought you were crazy,” she said.

“To be successful, to ultimately have that Grey Cup victory is the biggest factor in moving (the organization) forward. It was great for them and to be able to watch them is really spectacular. We’re going to come back next year swinging.”