Levondre Gordon still has days when that subtle reminder flashes before him – and it’s one that continues to instill confidence, commitment and a strong determination to be a success story.

Like a flashback of sorts, Gordon recalls entering high school, hearing the words of his single parent mother gesturing for him to get active in sports, focus on his grades and avoid trouble.

Those words couldn’t have been more significant for Gordon who, by his own admission, was a chubby 14-year old kid fresh out Fairwind Senior Public School in Mississauga, and not aware of the challenges that lay ahead.

Playing football has made a huge impact in his life.

Back in elementary school, Gordon got his first taste of the game – but it was flag football. Then, as one of the youngest students at St. Francis Xavier Secondary, Gordon took a liking to the contact game of tackle football. In grade 9, he gave it a try.

“We were in the car and my mother saw the school billboard announcing football tryouts,” he said. “At the time, I didn’t think she realized how physical the game would be, but I took her advice.” 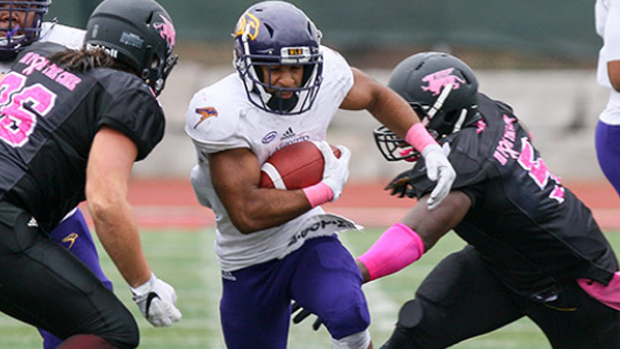 It didn’t take Gordon long to fit right in, adapt and, as a running back with speed, keep learning, developing and contributing. He was instrumental in Xavier winning a Region of Peel Tier Two championship and was chosen Most Valuable Player.

Then, it was off to university, and having to make a challenging and ambitious choice.

With interest from several schools, he decided on Wilfrid Laurier University – and a better scholarship financial package, from the Waterloo-area school, was one of the key factors.

Along the journey, Gordon, very approachable and not one with a swagger, kept hearing people say he’s too small, not fast enough and didn’t have what it takes to be a great player. All that did was boost his fortitude.

“Football has been huge for me – and not just by playing, but learning from that environment, staying in physical shape and the importance of teamwork,” said Gordon. “(Football) changed my character and I am better off. The guy I was many years ago is not the guy I am today.”

Gordon has come a long way and now, just months away from graduating with an Honors Degree in Sociology and Criminology from Laurier, is focused on a career in law enforcement. His dream plan is working in the special tactical unit of the Ontario Provincial Police.

As for football, a quick evaluation of the muscular 5-foot-10, 195-pound bundle of talent reveals that he has accomplished quite a bit since those days at Xavier.

Gordon has a ring from Laurier’s 2016 Yates Cup championship win, was chosen a two-time Ontario University Athletics all-star and played in the 2017 East/West all-star showcase. In his final year of university action, Gordon led the Ontario university conference in rushing yards with 1,016 and placed second in the country.

His career numbers at Laurier rank second all-time in school history for both carries and yards, while his rushing touchdowns (25) ranks him third all-time.

To top it off, Gordon was selected a First Team All-Canadian and invited to the Sunshine State this year to compete in the FCS Bowl, an all-star game set for Daytona Beach, on Dec. 8. For many Canadian and United States athletes, this match up of elite players on the gridiron could be their last, unless scouts from the CFL and NFL see something they like.

“I hope that I am not done (with football) and will make the best of this opportunity,” said Gordon, who, in his spare time, has assisted at football camps with the Cambridge Lions. “But, looking at what I have done, I have a realistic perspective that it might soon be ready for me to move on from football and focusing on a career.”

When he wasn’t on the gridiron or in classes, Gordon made use of his extra time often visiting elementary schools and reading books to young children. He also cared a great deal about the homeless and spent nights feeding those not as fortunate.

“You have to set the right example, because those kids look up to you,” he said. “I like helping people – and it’s also the right thing to do.”

“When I was 16 years old, I saved up and bought my first car,” he recalled. “When you’re young, you tend to do dumb stuff. I was racing my friend and my car spun out. I was very lucky and didn’t get hurt.

“Watching it all happen, was a police officer. I got a big ticket, demerit points and had lots of explaining to my mother. But what really impressed me was that the police officer was a pro, sat down beside me, said he once did the same and talked to me. He didn’t have to do that and that fatherly advice is something that is been tucked away in my mind forever.”