It was a tough second half of the year and playoffs for the Edmonton Eskimos, and after coming up short of the 107th Grey Cup presented by Shaw, head coach Jason Maas found himself on the chopping block.

After relieving Maas of his duties on Wednesday, Eskimos general manager and vice president of football operations Brock Sunderland told the media that it came down to the team underachieving.

“Jason and I had a long conversation following the 2018 season and discussed what we felt, moving forward, would be best for the organization to reach the ultimate goal — which was the Grey Cup,” Sunderland said. “We had a good discussion, I like Jason and have much respect for him personally. Unfortunately these past two seasons, we didn’t get to where I felt we should get.”

EPISODE OVERVIEW: The guys reflect on the 107th Grey Cup and the season that was. They also take a chance to look ahead at what changes might come, particularly at the quarterback position. 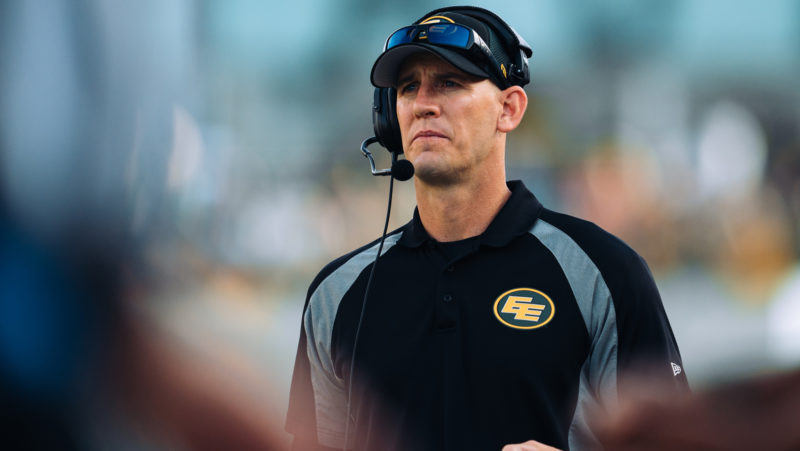 The season started out on the right foot for the Eskimos. They had a 6-5 record through their first 11 games and quarterback Trevor Harris was looking like he could arguably run away with the league’s Most Outstanding Player honour. However, after losing in Weeks 11 and 12, respectively, an injury to Harris would force the team to go down the stretch without one of its leaders.

Edmonton would go 2-5 from Week 13 to the end of the season, getting into the playoffs as the crossover team. Despite a big victory against the Montreal Alouettes in the Eastern Semi-Final, the Esks couldn’t get past the Hamilton Tiger-Cats, who ended their year in the Eastern Final.

“There wasn’t a pre-set decision. The reason it took this long is (because) I wanted to take my time and be pragmatic about this and gather as much information as possible,” said Sunderland on why the decision was made at this point. “Really, I didn’t want to make a long-term decision on short-term feelings. Whether that was the excitement of winning in Montreal or the disappointment of the 2-7 finish and the Hamilton loss.

“There were a lot of reasons but there was no set mandate of when a decision had to be made.”

The Eskimos boasted one of the best defensive units in the league during the regular season, leading the league in yards allowed per game (222.9) and sitting in a tie for first in sacks (56). However, it wasn’t as smooth sailing on the offensive end.

Despite the solid contributions from the various offensive threats, the team had trouble at times converting on third down as well as scoring on possessions inside the red zone. The team as a whole also had trouble with penalties, costing them at crucial moments in games.

“Well obviously penalties come into play, and at inopportune times, they presented themselves,” Sunderland said. “There’s a lot of reasons and pieces to the puzzle as to why the final decision was made. Do penalties at inopportune times ultimately hinder your chances? Yes. That wasn’t the straw that broke the camel’s back so to speak.”

For Sunderland and the Eskimos, there will be some turnover, on the sidelines and on the field. Defensive coordinator Phillip Lolley is the only carry-over contract on the coaching staff. As for the players, DaVaris Daniels, C.J. Gable, Larry Dean, Josh Johnson, Monshadrik Hunter, Mike Moore, Don Unamba and Nick Usher could all hit the open market come February.

They’ll certainly be in the market to add some new talent while retaining some of their biggest contributors from this past season. Edmonton will also be vying for a new head coach alongside a few other teams.

The BC Lions and the Ottawa REDBLACKS both relieved their head coaches of their duties after missing the playoffs in 2019. All three teams will likely be in the running for former Ottawa head coach Rick Campbell and current Winnipeg Blue Bombers offensive coordinator Paul LaPolice.

This will be the first time that Sunderland will hire a head coach — he inherited Maas and his staff when he joined the organization in 2017.

“It’s very important to find the right guy. Ultimately, we want the best success we can have for this organization. The qualities I’m looking for overall — and this will be vague — the truth is the person who gives us the best opportunity to compete for a Grey Cup. Is it necessary that they have CFL experience? No. But is that something that I’m looking for in a characteristic? Yes.”