Holley makes his mark in first year with Stamps 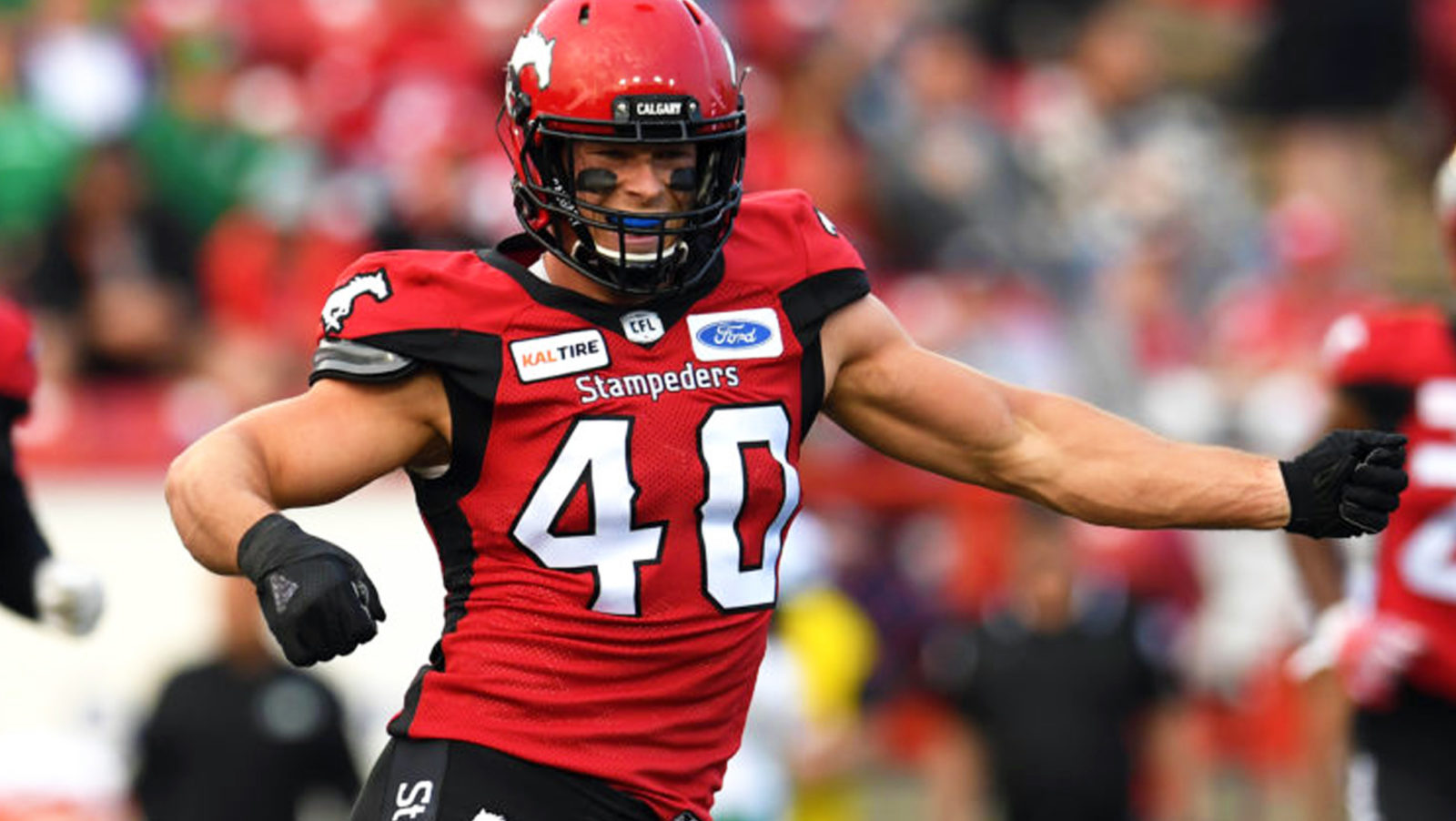 Holley makes his mark in first year with Stamps

There are certain moments of visceral impact, says Nate Holley, when the sensation rivals Christmas, New Year’s Eve, a 10th birthday bash and high-school prom night all rolled into one.

“One hit?’’ The Calgary Stampeders always-ready-for-detonation linebacker considered the question a moment. “Well, one I do remember is meeting John White in the hole in our last B.C. game.

“I had a couple of good hits that night, as I recall. One on a kickoff. Another one where I had two pulling guards, shook off the one guy and got a good smack on 21 (Brandon Rutley).

“It just felt … ‘Man, okay.’ Holley smiled like a cat lapping at a bowl of cream. “‘That is the way it’s supposed to feel.’”

“When you can hit somebody, you sense their body crumple and you’re absolutely fine, it doesn’t hurt you one bit?

“Nothing as good as that.

In the midst of running the interview gauntlet early on on CFL Awards night at the Scotiabank Saddledome, Holley then nodded towards the CFL Rookie of the Year bauble he’d been presented with a half-hour or so earlier.

“That, though, comes close.”

“Being away from football three years, not being on an active roster for the first year or the second year, that want, that desire, that appreciation of every rep, was second to none from me,’’ reckoned Holley. “Because I knew it was taken from me for two years.

“So you’re tired but: ‘Naw, it’s okay. You can be tired later. You’ve got plenty of time to be tired in the off-season.’

“I think that different appreciation was allowing me to be successful early and just kinda do what I did this season.”

In the audience to help Holley celebrate the moment were dad Paul and sister Randi.

And, naturally, very much in his thoughts, his mom, who passed away shortly before Nate graduated from high school.

“Everything I do is to make my mom proud,’’ said Holley in reflection. “Whether that’s being a good man or a good football player or in the future being a good husband.

“When something like this, tonight, happens, it’s a reminder of my upbringing and all that I owe my mom and my dad, just my family in general and for the way they’ve shaped me.”

Holley’s nearest and dearest were thrilled to attend.

“We’re just so proud of him,’’ said Paul. “We kinda knew he had it in him. We believed in him. We’ve watched him play since he was eight years old. And he’s just blossomed into a great young man.

“He loves Calgary. The team welcomed him. He’s made a lot of good friends. He feels at home here.”

The innate drive that embodies the Holley style, sister Randi chalks up to sibling rivalry between Nate and twin brother Nick, a runningback and teammate during their collegiate days at Kent State. 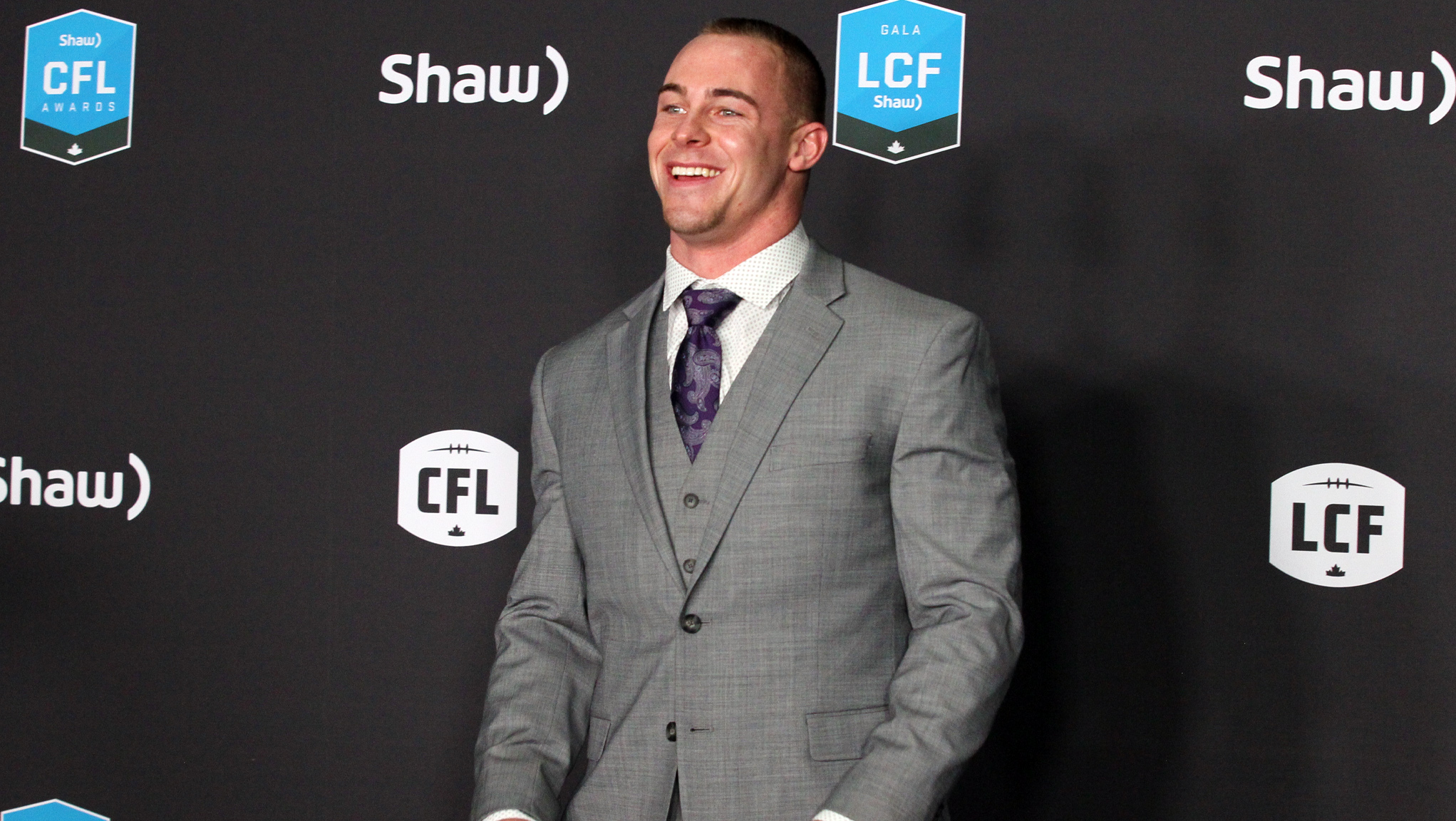 Nate Holley stops for a lineup of cameras on the red carpet at last week’s Shaw CFL Awards where he was named Most Outstanding Rookie (Dave Chidley/CFL.ca).

“Nick and Nathan always joked that they literally fought to get out of the womb of our mother,’’ says Randi. “Because they’re twins.

“Since they were little they’ve been relentlessly competitive. Whether it was racing off the school bus to get the refrigerator first or what have you.

“Everything in our family was a competition. And they loved football from the very beginning. I think just having each other to compete against, both being incredible athletes, has given each of them that extra edge.”

“In school,’’ chimed in Paul, “their mom and I had to remind them: ‘OK, it’s not who gets done first, it’s who gets the better grades.’ Each of them had to be first, because they viewed everything as a contest.

“Neither Nate or Nick are the biggest guys. But they’ve got heart. They don’t quit.”

That persistence is personified in Holley’s patient ascent to the awards stage Thursday. He began the season, remember, primarily as a special teams monster, filling in at the Will linebacker spot as required. When man in the middle Cory Greenwood went down injured, Wynton McManis was shifted from Will into the centre, and Holley took over outside and began folding ball carriers like pieces of origami.

Despite starting just eight games, he finished third on the club at 78 defensive tackles. With a team-leading 22 special-teams tackles, Holley wound up making a total of 107 defensive plays, good for second highest in the league.

“Just a real pleasure to coach,” lauded Stampeder defensive co-ordinator Brent Monson, “because he did all the right things from the jump.

“One thing we preach in camp is: Effort is Key.

“We had a little effort belt and I’d present it to the guy we thought had shown the most effort on a given day.

“Well, I’d be giving it to him pretty much every second day.

“He played strong safety down south. When you bring a guy who played a different position into the box 100 per cent of the time, there’s a bit of a learning curve, but his didn’t last long because he’s just so naturally physical.

“A seamless transition, in my opinion.

“He’s all business all the time. Meeting rooms. On the field. Practice. A tackling machine with enough speed sideline to sideline.

“As good as anybody in our league, in my opinion.”

Holley has certainly come a long way in a short period of time.

“When my time came, I was ready. I’ve been trained that way my whole lift. Hit the ground running when an opportunity presents itself.

“I think I did that this season.

Ahead, his immediate future remains unclear.

“Tonight was fantastic. I’m so grateful. This year was a great experience for me.

“What I do know, the one thing I can tell you for sure, is that whenever I hit a football field again, any football field, whether it’s down there or up here, 100 yards or 110, they’re going to get the best version of me.”