For Lukas Hortis, there’s nothing more arduous, than a few hours of physical work with livestock, especially cows, on the family farm in Northwestern Ontario.

And then there’s Dylan Halls, with a Level 4 Certification in sailing, who has an alternative perspective on strenuous times, claiming that helping youngsters navigate the waters of Lake Superior to learn the sport can be exhausting.

A tale of two cousins, but when the 15-year olds get together for some good ole’ fashion fun, their biggest validation of strength, knowledge, determination and fun, is playing football.

For them, it’s more than a passion, but now a lifeline.

Ever since those earlier years, the two were determined to try football – and then look for opportunities to get even better. 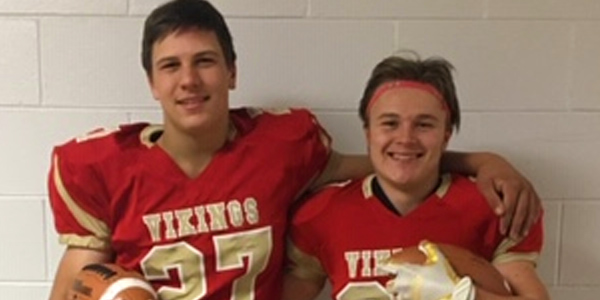 Now, playing for Hammarskjold High School in Thunder Bay, Vikings head coach Matthew Steele was so impressed with their rookie year achievements on, and off, the field, that he is beaming about the pair of prize athletes being on the school gridiron program until graduation.

“Advocates for our school, leaders on the field, they’re outstanding young men,” said Steele, who has been coaching football for 15 years. “Maturity, dignity and class. They have it all and bring different aspects to the team. When I first saw them, you could recognize an athlete and they, as team captains, set the tone for others.”

The Grade 9 year was so impressive that Halls, a running back, was the easy pick for Offensive Most Valuable Player, while Hortis, a linebacker, received the Coaches Award demonstrating hard work and integrity.

A year later, the two continue to impress and dominate.

There’s a bit of irony, too, as both youngsters had a tough time convincing their parents to let them play. Things turned out for the best with the support of their grandfather, one of the founders of the Thunder Bay Minor Football Association.

“I remember, my father was borderline and my mother would have no part of it,” said Hortis, who now measures in at six feet and 185 pounds. “Parents are always worried and I understand, but when they saw me play, have fun and I scored four touchdowns as a running back (in the TBMFA playing for the Ticats), things changed.”

Hortis was in grade 6 when he played his first game and immediately took to the physical game. Halls, a year older when he saw game action in the minor league, started as a centre, but coaches noticed his speed when he picked up a fumble and scored. It didn’t take long until he became a halfback.

“My first touchdown was a 90-yard run – and I was seven years old,” recalled the 5-foot-7, 165-pound speedster. “It’s something I’ll never forget. Just an amazing highlight and all that did was give me the confidence to work harder and get better.”

Halls has come a long way in football with impressive hustle helping him strive, and also create headaches for opposing teams. He was invited to Winnipeg for a look-and-see and dazzled enough coaches to get selected to Team Manitoba.

“It was a great feeling, an amazing opportunity – the highlight of my life, so far,” said Halls. “To be noticed for your skill, and by people in another Province, it makes me feel real good.”

While Hortis and Halls have learned to deal with success and joy, there has also been struggle and hardship. Both have grasped the grind of the game and, along with independence, have been much more positive in dealing with change.

When the going gets tough, Halls just keeps chomping away and leads his team in rushing yards. As for Hortis, who is No. 1 in tackles made, and thrives on the physical game, his training involves, well, something uncommon to most football players.

“On the farm, the goats and chickens can be fun, but I think I improve my movements and strategy for football, by catching cows and pigs when they won’t do what you want them too,” said Hortis, who has also won his share of ribbons riding horses recreationally.