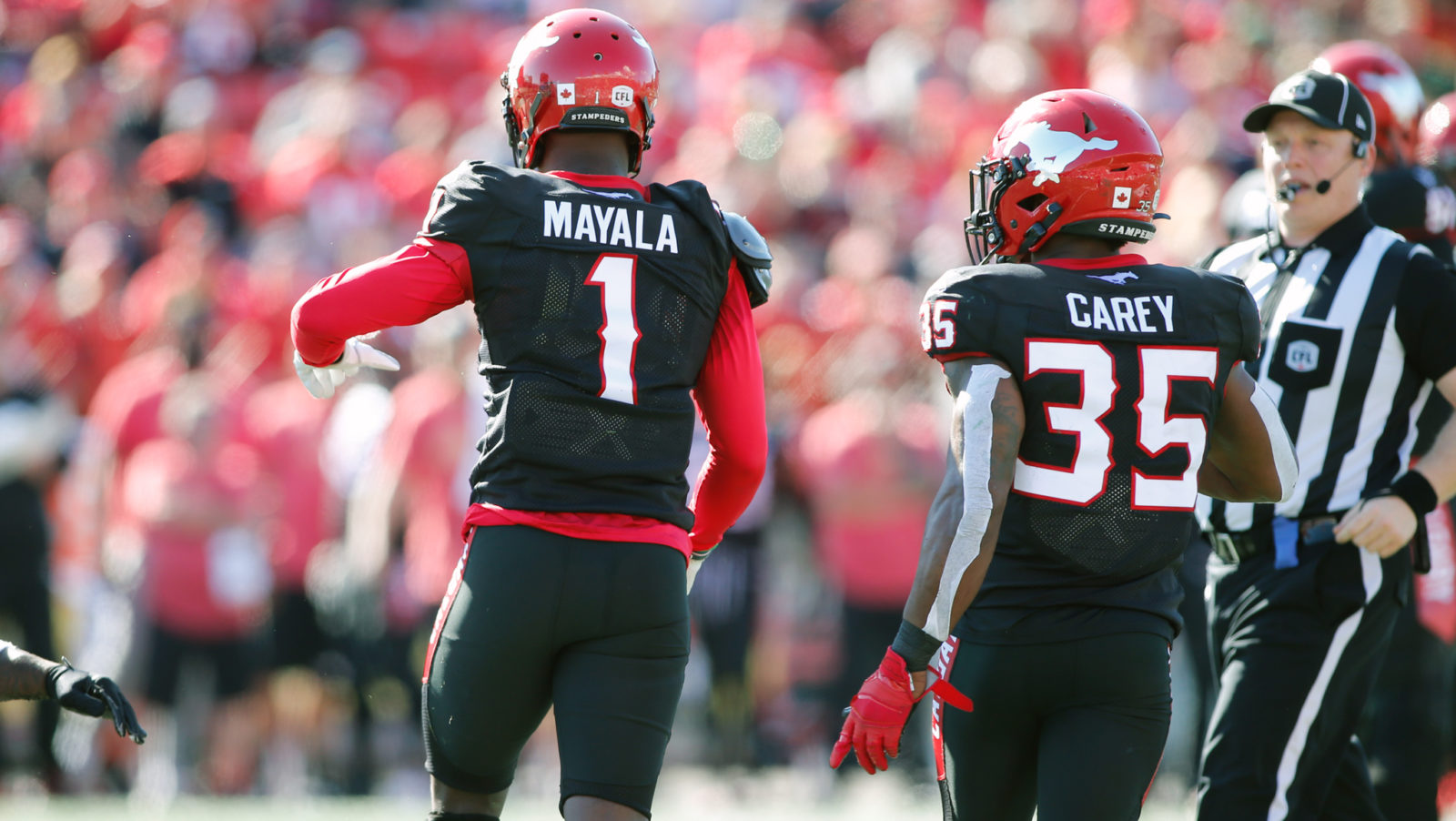 Every year I put together a list of players primed to break out across the Canadian Football League.

Last year there were some easy choices (Bralon Addison, Reggie Begelton), some diamonds in the rough (Eugene Lewis) and some obvious misses (Johnny Manziel).

Based on age, situation and recent contributions, here’s an early look ahead to some of the stars that could take the league by storm in 2020. Of course, some players already deemed to have broken out (i.e. Stamps defensive back Raheem Wilson) are left off.

You’ll find at least one player from every team, and, just like in the past, players with 20 or more career starts won’t be considered.

At 6-foot-5, 230 pounds, you couldn’t miss Jevon Cottoy if you tried when the Lions’ offence was on the field in 2019. The junior football star with the Calgary Colts and Langley Rams made his mark as a rookie, catching 38 of his 44 targets (86%) for 386 yards and a touchdown. Cottoy earned the trust of Mike Reilly in 2019 and should see his role grow in his sophomore season, with a unique skill-set that separates him from other options at his position.

The Eskimos gushed over Mathieu Betts after drafting him third overall in the 2019 CFL Draft last spring — the Laval product probably would have gone first overall if not for the threat of losing him to the NFL. What matters is he’s here now, and could be a ratio-breaker for a long time in the three-down game after easing into his rookie season with six games and one start. Betts and Kwaku Boateng off the edge give the Eskimos a ton of ratio flexibility. 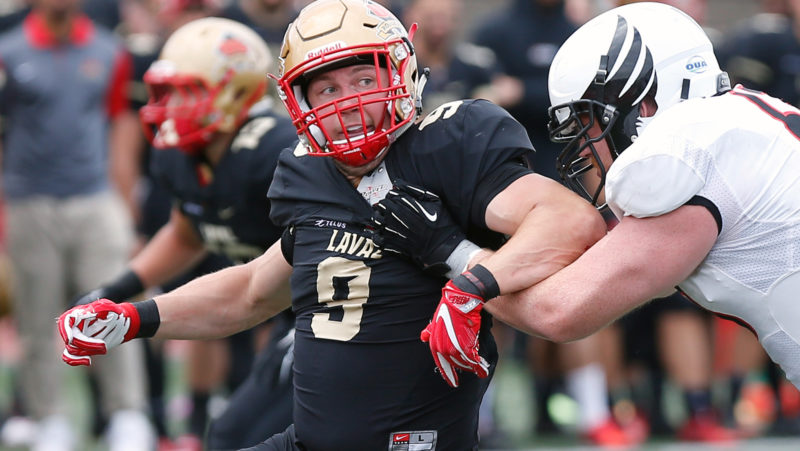 Shaq Cooper has quietly become the CFL’s fastest rising running back prospect. The 26-year-old made four starts last season in place of C.J. Gable and proved that he is a long-term fit, finishing with 352 rushing yards, two touchdowns and 5.4 yards per carry. He eventually forced his way onto the roster in the post-season even when Gable was healthy. Due to become a free agent on Feb. 11, the shifty running back deserves a larger role in 2020.

Pegged as a high first round prospect, UNLV offensive lineman Kyle Saxelid surprisingly fell to the second round (12th overall) for the Eskimos last spring. It worked out well for the Green and Gold, who saw tremendous growth from the 24-year-old in 2019 as he started five games at both guard and tackle, not including back to back starts at left tackle in the playoffs. The versatile 6-foot-7, 290-pound lineman should be a day one starter next season.

A former third round draft pick of the NFL’s Philadelphia Eagles, Josh Huff has the speed and elusiveness to be a star in the CFL. The Oregon product put some of that on display in 2019, becoming a go-to target for Bo Levi Mitchell when Markeith Ambles and Eric Rogers were both sidelined. He needs to cut down on his drops, but Huff has a chance to take a big step forward in 2020, especially if Reggie Begelton winds up south of the border.

Josh Huff emerged as a go-to receiver for Bo Levi Mitchell and the Stamps in 2019 (Johany Jutras/CFL.ca)

Hergy Mayala is already delivering first round value after being picked eighth overall in the 2019 CFL Draft. The 24-year-old has a powerful 6-foot-1, 212-pound frame and possesses obvious playmaking ability in one-on-one situations, resulting in three catches of 30-plus yards and an average of 14.8 yards per catch — 10th best among qualified receivers. Despite a deep talent pool in Calgary, Mayala emerged as a regular starter in 2019 and has 1,000-yard upside in 2020.

The Riders’ 14th overall pick in 2018, Micah Teitz made his first career start last season, replacing an injured Cameron Judge and recording five tackles in a loss to Calgary. The 23-year-old is highly regarded in Saskatchewan and fits the profile of a future starter, especially if Judge, a pending free agent, doesn’t return next season. Even if he doesn’t earn a starting job soon, Teitz should still make an impact on coverage teams after making 11 special teams tackles in 2019.

The Bombers were the only team without a 1,000-yard receiver in 2019, making any Winnipeg pass-catcher a risky proposition for a breakout. But Rasheed Bailey simply looks the part, coming off an eye-opening training camp last spring before emerging as a starter late in the year. While Bailey faded in the post-season, the 6-foot-1, 210-pound receiver did enjoy a stretch of four straight games with four or more catches during the regular season. He caught a touchdown in the Grey Cup that was overturned. Bailey should be a starter in 2020. 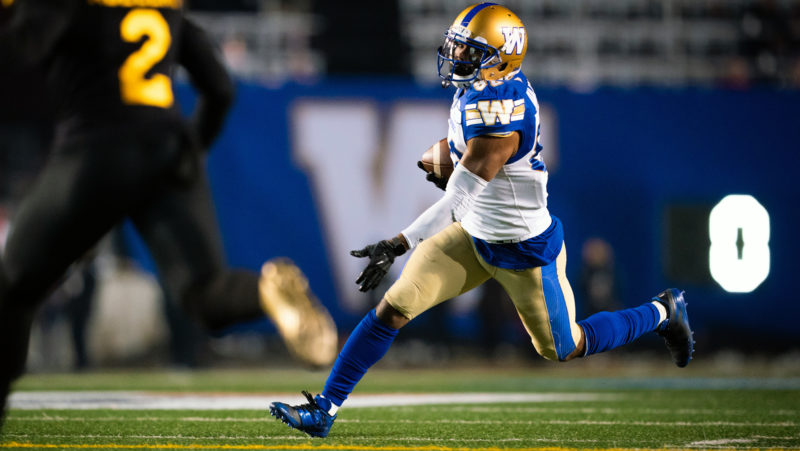 After latching on in camp, Rasheed Bailey emerged as a starter for the Bombers this season (Johany Jutras/CFL.ca)

Despite making just one regular season start, Mike Jones became a fixture in the Bombers’ secondary in the post-season, starting all three games including the 107th Grey Cup presented by Shaw. The 24-year-old made his presence felt in the Grey Cup, breaking up a key deep ball to Hamilton receiver Mike Jones near the goal line while also adding four tackles and an interception. If Jones can emerge as a regular starter in 2020, a big year could be in store.

Despite playing a backup role the second half of the season, Cody Speller took over the starting centre job in the playoffs and never looked back, helping the Bombers capture the 107th Grey Cup presented by Shaw. The Blue and Gold boast a ton of Canadian depth on the interior of their offensive line, but it’ll be hard to deny Speller a starting job in 2020, especially with former draft pick Michael Couture pending free agency. After going undrafted, the arrow is pointing up for Speller.

Visions of a Rob Gronkowski, tight end-type player in the CFL are probably unrealistic, but Ticats fullback Nikola Kalinic showed some Gronk-like flare in his rookie season, catching 12 passes for 106 yards and a touchdown. Make no mistake, Kalinic’s biggest impact will come as a blocker, but the Ticats have a unique weapon and should look to get him more involved as a receiver in 2020. The former 10th overall pick could become a very popular player in the three-down game. 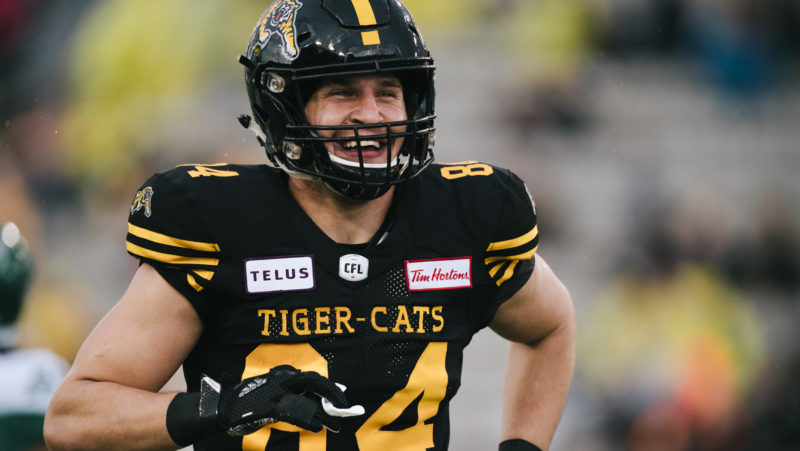 The Ticats could find more ways to get Nikola Kalinic involved in their offence in 2020 (Johany Jutras/CFL.ca)

A former third round NFL Draft pick, Lorenzo Mauldin should be primed for a bigger role in 2020 after making just one start in his first season with the Ticats. Still, the former Louisville star managed to record three sacks in a rotational role, in addition to forcing a fumble in the Eastern Final vs. the Eskimos. With Adrian Tracy and Ja’Gared Davis both due to become free agents, Mauldin will compete for a chance to start next training camp and has the physical traits to be a star in the CFL.

This one feels like cheating, but a four game sample size just isn’t enough to declare Sean Thomas Erlington a star in the CFL. He’s headed that way however, as the 27-year-old ratio-breaker should be the Ticats’ starting running back next season opener assuming he’s recovered from the injury that sidelined him for most of 2019. Thomas Erlington had nearly as many receiving yards (193) as rushing yards (224) last season and offers a versatile skill-set that will make him a big offensive contributor for years to come.

With Bralon Addison and Luke Tasker both pending free agency, opportunity knocks for Marcus Tucker to take on a bigger role in 2020. The 5-foot-10, 190-pound receiver flashed potential throughout 10 starts last season, racking up 475 yards and two touchdowns, including a 52-yard catch against Winnipeg in September. Jalin Marshall is also on the breakout radar for the Ticats, who have developed some of the CFL’s biggest receiving stars under Tommy Condell and the departed June Jones.

One of the most talented prospects in the 2019 CFL Draft, Robbie Smith wasted no time in his rookie season, recording four sacks and a forced fumble in 14 games. Still just 22 years old, Smith has the chance to follow the path of Kwaku Boateng as a ratio-breaker at the defensive end position, and has barely scratched the surface of his potential. The 6-foot-2, 247-pound end out of Wilfrid Laurier should compete for a starting role next training camp. 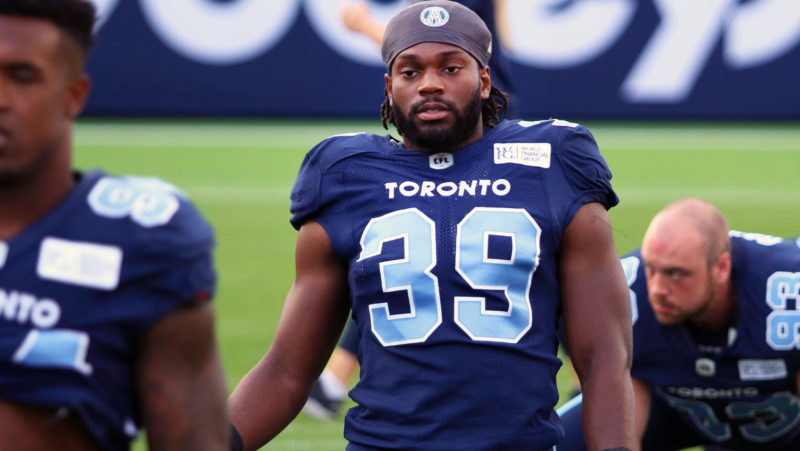 If not for an injury, Brandon Burks might have run away with the Argos’ running back job last season after averaging 6.0 yards per carry or better for a second straight year. James Wilder Jr. is out in Toronto, but Burks will still have to compete with NFL retreads Karlos Williams and Bishop Sankey along with A.J. Ouellette come training camp. Still, Burks’ experience and ability likely give him the edge in what’s expected to be a competitive battle for snaps.

Three years after becoming the draft’s 22nd overall pick in 2016, Jamal Campbell made his first career start at tackle for the Argos in 2019. The York University product never looked back, finishing out the season as the team’s starting right tackle. The Argos have taken a slow, patient approach with the 6-foot-6, 305-pound tackle, and it could pay off if he becomes a long-term answer — a potential ratio-breaker to replace departed longtime Argo Chris Van Zeyl.

After struggling to get on the field in 2017 and 2018, the third season was the charm for Argos receiver Chandler Worthy, becoming a big part of the team’s future plans after signing a three-year extension. The talented speedster, who ran a 4.38 out of college, doubled as a receiver and returner in three starts this season, catching 12 passes for 134 yards and two touchdowns. There’s plenty of uncertainty in the Argos’ offence next season, but Worthy has the chance to become a household name.

The REDBLACKS failed to produce many wins in 2019, but they may have seen a glimpse of their future in returner/receiver DeVonte Dedmon. The 24-year-old dazzled at times in a return role, eventually forcing his way onto the offence with one start before being injured. Much will depend on who the REDBLACKS hire as their next head coach, but if the team envisions Dedmon as a contributor on offence in addition to the return game, he could make a significant impact as early as 2020.

Injuries to B.J. Cunningham and DeVier Posey eventually opened the door for Dante Absher, who got the nod over veteran Chris Matthews in the Eastern Semi-Final. The 25-year-old remains a mystery heading into the off-season, but did haul in 13 passes for 144 yards and a touchdown — including playoffs — for the Alouettes. Targeted eight times in each of his last two games, could Absher have the inside track on a starting job come training camp? If so, he appears to have some untapped potential along with star returner Mario Alford.