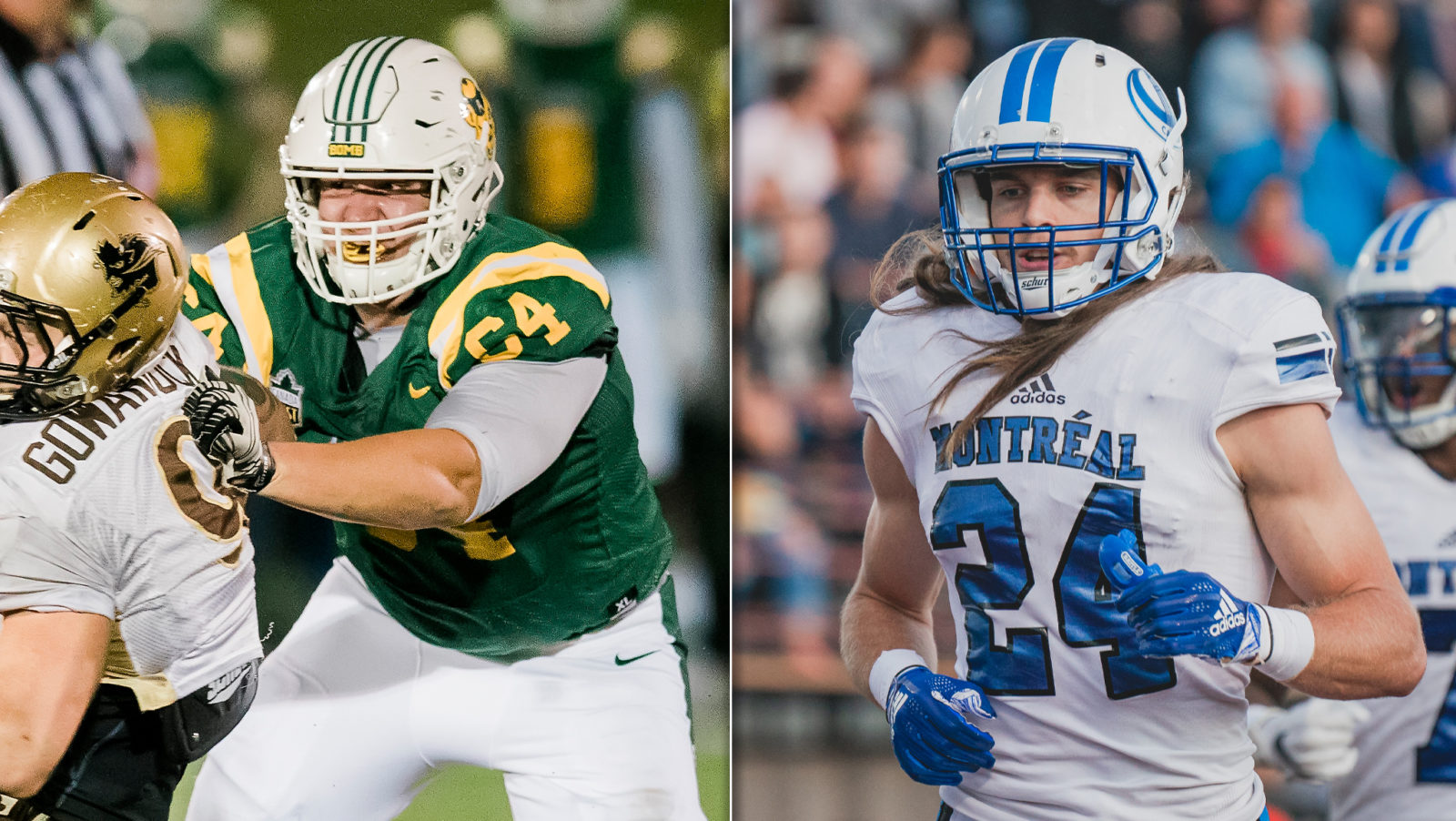 The CFL Draft is the lifeblood of the league’s national talent pool, and the 2020 class has the ability to change the game from day one of training camp. Where these players will land and the fit they will find is up to copious amounts of debate over the coming weeks and months as we finish the college football season and head towards ‘combine season’ in an effort to gain a better understanding of the elite athletes who hope to make a living in professional football.

For now, it’s time to simply learn about the young men whose hard work has garnered enough attention to be recognized by the central scouting bureau in December’s rankings.

Previously unranked tackling Carleton tackling machine Jack Cassar of Mississauga has reached into the top 20 in December thanks to his award-riddled 2019 campaign. Cassar would’ve undoubtedly shown well on film evaluation and combine testing this spring, that work is now validated by a scouting bureau appearance.

Dynamic Waterloo slotback Tyler Ternowski of Hamilton, Ontario moves up three spots in the December rankings from his previous position of 19th. The shifty playmaker will remind many CFL fans unaware of his U Sports exploits of Argos slot Jimmy Ralph once he gets to a training camp, but for now, he’ll be happy to continue moving upwards in the draft evaluation process.

Calgary Quarterback and Vanier Cup Champion Adam Sinagra has also moved forward, similar to Ternowski, after a strong U Sports season saw him battle adversity and injury to help the Dinos capture their first Vanier Cup since 1995 but he is not the highest-rated quarterback in these rankings, more on that to come.

The only defensive back listed in the December scouting bureau rankings is Montreal standout Marc-Antoine Dequoy. Dequoy had a pick-six that sealed a road Dunsmore Cup victory over Laval this November, but he’s much more than that. Dequoy tilted the opposing offences approach consistently in the RSEQ as quarterbacks and coordinators did everything in their power to keep the ball away from the long-haired defensive dynamo. 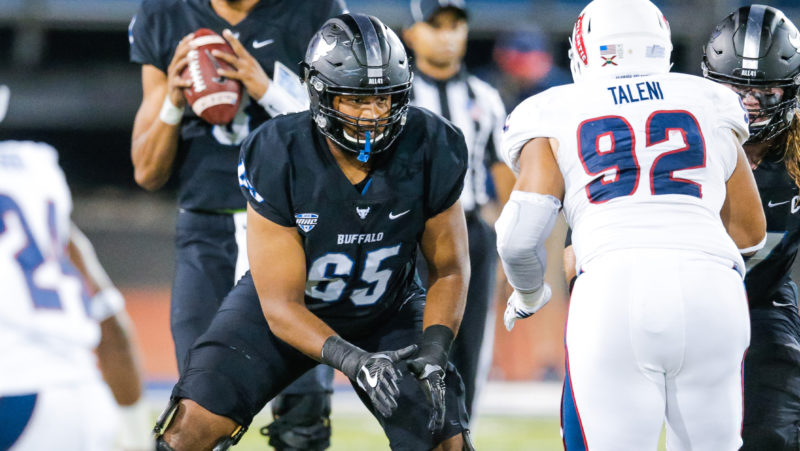 Jack-Kurdyla appeared in 11 games this season on an offence which averaged over 250 rushing yards and 5.0 yards per carry, while only allowing eight sacks. The 6-foot-4, 300-pound Montreal native appeared in 47 games over a four-year collegiate career which will conclude in the Makers Wanted Bahamas Bowl against Charlotte on Dec. 20.

A big body capable of filling a 6th man role on any CFL line quickly, Jack-Kurdyla is sure to gain CFL Draft momentum as the spring progresses.

O’Donnell anchored an offensive line that averaged 399 yards of total offence and 5.2 yards per rush this season. The 6-foot-6, 300-pound native of Red Deer, Alta., was named a U SPORTS First Team All-Canadian for his efforts.

One of the very best in the country, and an O’Donnell with a big, long, lanky frame playing offensive line in Alberta? Could we see him paired up with the Eskimos’ Matt O’Donnell in the near future? Only time will tell.

Stud. The best quarterback prospect in the central scouting bureau since Jesse Palmer, Rourke is ready to play quicker than you even expect, but he will have plenty of NFL opportunities after finishing the regular season with a career-high 2,676 passing yards on a 61.4 percent completion rate while amassing 32 touchdowns (20 passing and 12 rushing).

The performance earned the Oakville, Ont., native an All-MAC first-team selection. In three years as a Bobcat, including 36 starts (23-13, .639), he has accumulated 7,313 passing yards, 2,552 rushing yards and 108 touchdowns (60 passing and 48 rushing). Rourke will play his final collegiate game against Nevada in the Famous Idaho Potato Bowl on Jan. 3.

If you love college football, you already know the name Chase Claypool. If you love the CFL, all you can do is hope he gets a chance to play North of the border because his size and speed would create issues and a dynamic pass catcher similar to the likes of Tevaun Smith when he came out of Iowa and eventually landed with the Eskimos.

Claypool led the Fighting Irish in receptions (59), receiving yards (891) and touchdowns (12). The Abbotsford, B.C., native tied a school record with four receiving touchdowns against Navy in November. Notre Dame will take on Iowa State in the Camping World Bowl on December 28.

In addition to his duties on the offensive side, Claypool also plays as a gunner on special teams. Across his four-year career in South Bend, Ind., he has totalled 143 catches, 2,013 receiving yards and 18 touchdown receptions.

Gallimore is an absolute monster, and lucky for you, if you’re late to the party, you can enjoy his work in the college football playoff yet again this year. His raw power and quickness combined with diagnosing plays allow him to rack up stats even against the NCAA’s best.

Gallimore notched 25 tackles (17 solo and eight assisted), three sacks and 6.5 tackles for a loss during the regular season. The Sooners finished with a 9-1 record, including a victory over Baylor in the Big 12 Conference Championship game where Gallimore registered two tackles and a sack. The Sooners will face LSU in the Chick-fil-A Peach Bowl on December 28 with the winner advancing to the College Football Playoff National Championship.

While these rankings will shift and evolve throughout the process due to eligibility, injury and performance they do give us an outline of what the top end of the CFL Draft could look like come May.

Once again this year, it appears to be a receiver and offensive line top-heavy draft with a deficiency of top-rated talent at linebacker and defensive back.

Eighteen schools are represented in the winter rankings with only a pair of schools featuring two prospects. Laval (No. 6 Ketel Asse and No. 13 Adam Auclair) and Carleton (No. 18 Jesse Lawson and No. 20 Jack Cassar)

This is more than just a list it is the beginning of a Canadian Football League journey for many of these names. Last year, eighteen prospects identified in the winter rankings were selected in the CFL Draft with six being taken in the first round, which begs the question: Which six are you choosing as first-rounders five months away from selection night?