TORONTO — The Toronto Argonauts have parted ways with Head Coach Corey Chamblin and replaced him with former Stampeders assistant Ryan Dinwiddie, the team has announced.

The move was initially reported by Justin Dunk of 3 Down Nation, along with TSN’s Dave Naylor, on Thursday afternoon.

Chamblin was in his first season at the helm of the Argos after spending the 2017 campaign with the Double Blue as their defensive coordinator. He was brought in to replace Marc Trestman, who was let go by with the organization following the 2018 season.

After an 0-6 start, the Argos struggled to their second straight four-win season, finishing third in the East and missing the playoffs. 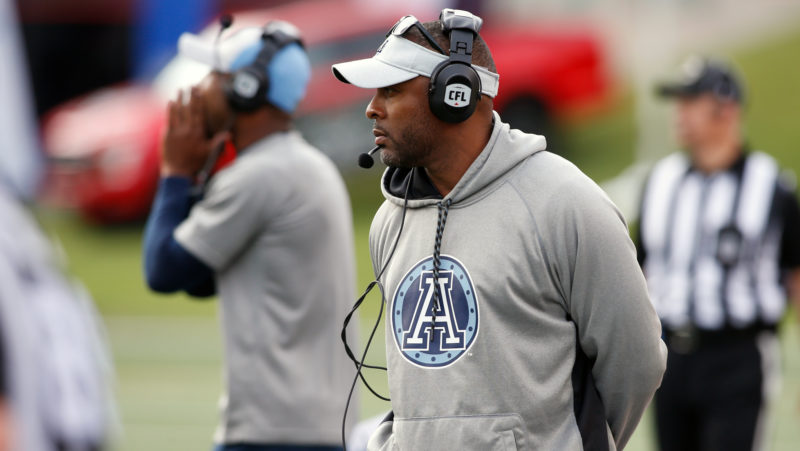 Dinwiddie, 39, went into coaching after a career as a backup quarterback with Winnipeg. His playing career will be tied to his first career start that was made in the 2007 Grey Cup after an injury in the Eastern Final sidelined starter Kevin Glenn. He would close out his career with the Saskatchewan Roughriders before retiring to head into coaching.

He got his first coaching gig as a part of the Montreal Alouettes staff as an offensive quality control coach under Dan Hawkins in 2013. Ahead of the 2016 season, he made the move to Calgary to become the Stampeders’ quarterbacks coach.

During his time with the Red and White, Dinwiddie has worked with backups Drew Tate and, more recently, Nick Arbuckle. He’s also worked alongside 2018 Most Outstanding Player and Grey Cup MVP Bo Levi Mitchell during his entire tenure.

Dinwiddie won his first championship with the Stampeders in 2018 when the team won the 106th Grey Cup in Edmonton.