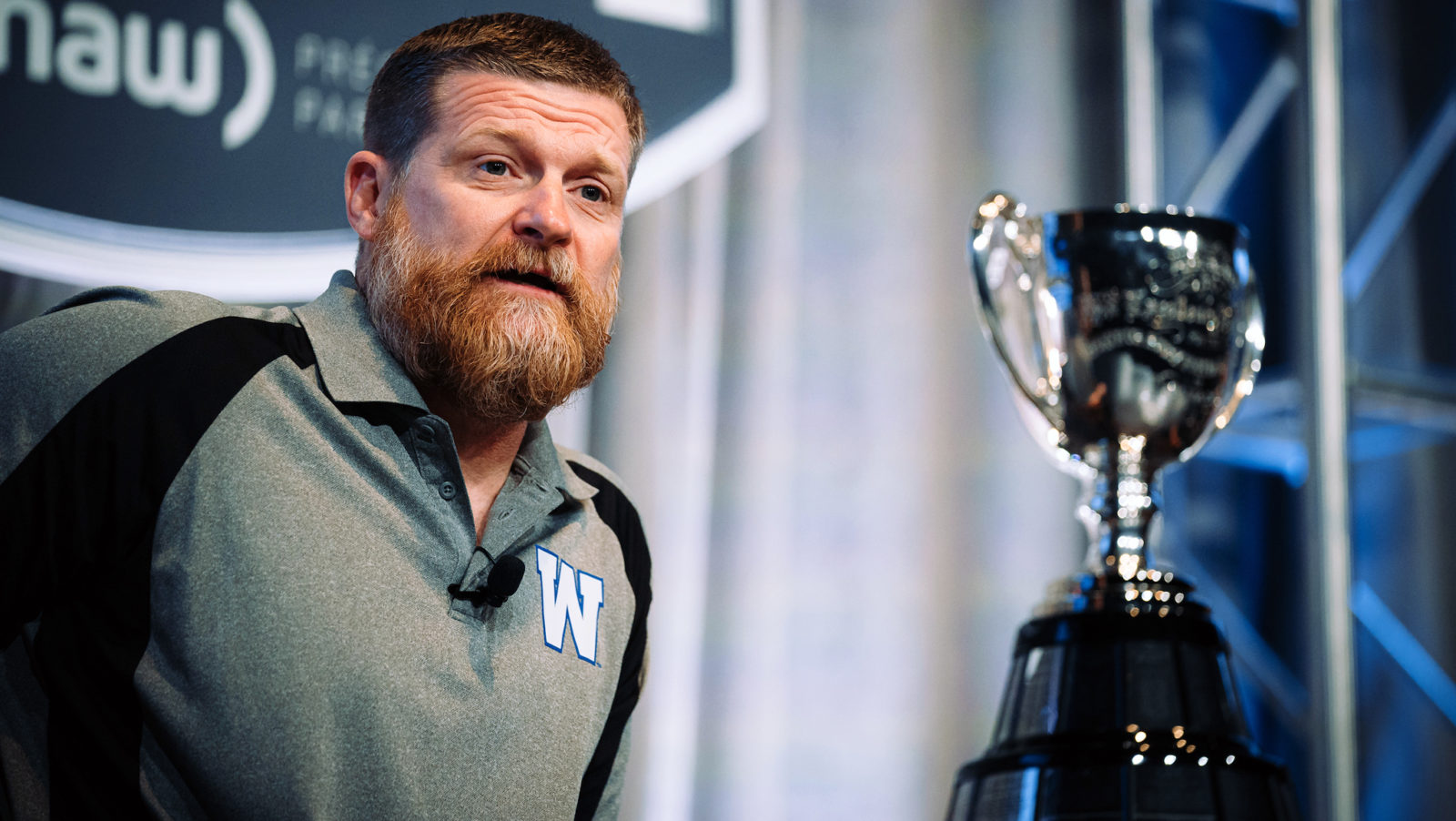 Mike O’Shea absolutely despises when the spotlight is pointed in his direction.

Yet, it’s impossible to avoid that beam of extra attention on a day when the Winnipeg Blue Bombers formally announced his contract extension through the 2022 Canadian Football League season.

Already the CFL’s longest-tenured head coach, O’Shea will remain with the Bombers after guiding the franchise to its first Grey Cup title in 28 years in last month’s victory over the Hamilton Tiger-Cats.

Reluctant as he is to talk about himself, O’Shea agreed to speak to bluebombers.com today in what turned out to be a candid and honest 15-minute conversation. 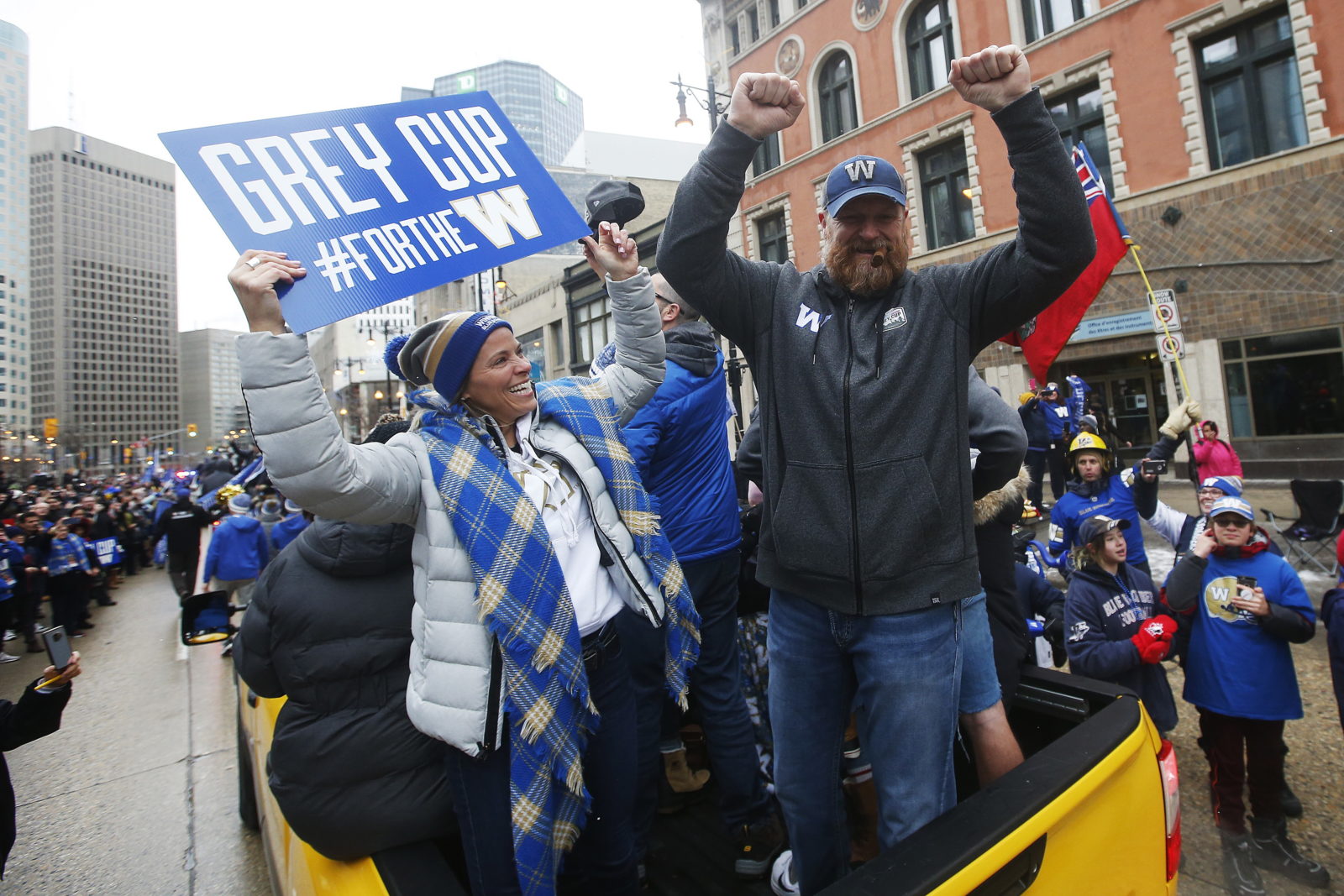 O’Shea celebrates the Grey Cup victory during the team’s parade in Winnipeg (BlueBombers.com)

BLUEBOMBERS.COM: Was this news ever in doubt in your mind?

O’SHEA: I’ll say ‘No.’ I want to be here and we’ve accomplished a few of the things we set out to accomplish. But there’s more work to be done.

BLUEBOMBERS.COM: Can you expand on that? What would that work be?

O’SHEA: Well, there was an ‘S’ on championship when we made our first statements. We’ve accomplished a lot in terms of consistency and winning a bunch of football games of late and we did manage to get a Grey Cup. But there was the idea to compete for them regularly and I don’t know that that’s the case yet.

BLUEBOMBERS.COM: This came up during the season… did you really want to shelve all the contract talk until the end of the year and how difficult was it to do that if that was the case?

O’SHEA: It wasn’t hard for me. There was a lot of false stuff being said about me declining offers, which wasn’t the case. That wasn’t the case whatsoever. It’s unfortunate, but anybody can say anything and it gets picked up by all sorts of different media outlets or news people or pseudo-news people. There’s a lot of wasted energy, and I don’t particularly like to waste it, on refuting claims and denying stories and stuff like that.

BLUEBOMBERS.COM: At the Grey Cup parade when you were up on stage with your wife and daughters – your son Michael was still at university – you talked about picking up and moving your family out here in 2014 after being hired. You were coming here at a time where the shine was off the ‘W’… can you take us back to that decision. You weren’t a single guy just moving out here. That was a decision to move your whole family and it couldn’t have been easy with your roots in Ontario.

O’SHEA: That decision is made well in advance when there’s talk of being interviewed and opportunities. That’s when you have those conversations with your family… you don’t wait until you get an offer. That’s part of the decision. The teams in the West, in particular, want you to move into the community. It’s like a non-starter for Western clubs. You want to be in the community. You want to experience CFL football out West and you want your family to experience that, too. And I know for a fact I couldn’t do it if they weren’t here because it would be way more taxing, way more difficult.

O’Shea celebrates with the Bombers after capturing the 107th Grey Cup (CFL.ca)

BLUEBOMBERS.COM: This does seem like a good fit for you with your personality and this town. I’m not trying to get into the psycho-analysis here, but you don’t seem like the Armani-suit type. And that seems to play well here.

O’SHEA: (Laughing) I can wear an Armani suit… I can’t afford one, but I can certainly wear one.

BLUEBOMBERS.COM: I think you know where I’m going, though…

BLUEBOMBERS.COM: There are a lot of folks that are still trying to process the Grey Cup victory and to many it still seems like a blur. I want to go back to the scene at the airport when the team arrived the day after the Grey Cup. As we walked to the baggage carousel and there were all those fans there, I could see you hanging back and you had tears in your eyes. And then to hear that ‘O’Shea, O’Shea, O’Shea, O’Shea’ chant… I know you hate when we make it about you, but I would imagine that’s one of many powerful moments for you since Grey Cup Sunday.

O’SHEA: Without a doubt.

BLUEBOMBERS.COM: What are the other moments that jump out for you?

O’SHEA: There are just so many stories in the days following the Cup – at the social and the family day, the parade… all these events where you get to speak to a lot of people and hear their stories. There are just so many of them that hit you right in the heart. I’m just very happy that I was a part of that.

BLUEBOMBERS.COM: This is a different Grey Cup victory because it ended the drought. I’m sure you feel that, too.

O’SHEA: Absolutely. I think about the people that have been around all the losses and the close calls and the ‘what-ifs’… for them this has got to feel really good. I often say the guys who won the Grey Cup in Hamilton in ’99 after coming off a 2-16 season a couple years before that… those guys that were on that team, it must have been something really different compared to the guys who showed up and went to a Grey Cup and lost (in 1998) and then won a year later.

We won a Grey Cup in Toronto in 2004 basically coming out of bankruptcy after being saved by David Cynamon and Howard Sokolowski. To go through that and then come out on top the very next year, it was something different. It meant something different because of the trials.

I’ve said it before… the more you suffer, the more it shows you really care. There’s a part of that here now. That’s why Jake Thomas was the perfect guy to receive the Cup first after we won it.

BLUEBOMBERS.COM: You’ve mentioned that before, that your fondest Grey Cup moment as a player was actually watching another teammate be handed the trophy.

O’SHEA: It was Jude St. John. Chad Folk and I are standing on the edge of the stage watching that… standing back and soaking that all in is where I’m at. It’s the best vantage point.

BLUEBOMBERS.COM: I know this sounds like a cliché question, but how have you ‘evolved’ as a coach from the day you first walked in the doors here?

O’SHEA: I’ve changed immensely but to pinpoint one particular thing, I wouldn’t know what it is. I think you grow every year. Every year is a new team and a new group of guys and has a different feel to it.

This year my growth maybe came with just being that much more in tune with the team. I always tried to be. I don’t know, maybe I was just more in tune with myself. Maybe that’s a more accurate way to describe it.

BLUEBOMBERS.COM: What does that mean, though? Can you explain that?

O’SHEA: It’s hard to explain. It’s just being able to analyze inwardly more quickly. To look at the situation and know how I would react before making a decision I know is appropriate and analyze it very quickly. I don’t have to deliberate as much.

BLUEBOMBERS.COM: Everyone has a certain level of passion for their job. Do you still get geeked up to come to work every day after what’s happened in the last month?

O’SHEA: Oh yeah. I will say I’m looking forward to having a little bit of downtime where I don’t think about anything because, once again, this is a pretty emotional time in this city. It’s hard to go anywhere and not feel it or not go over it all over again because the stories keep coming and fans keep crying. It blows you away. 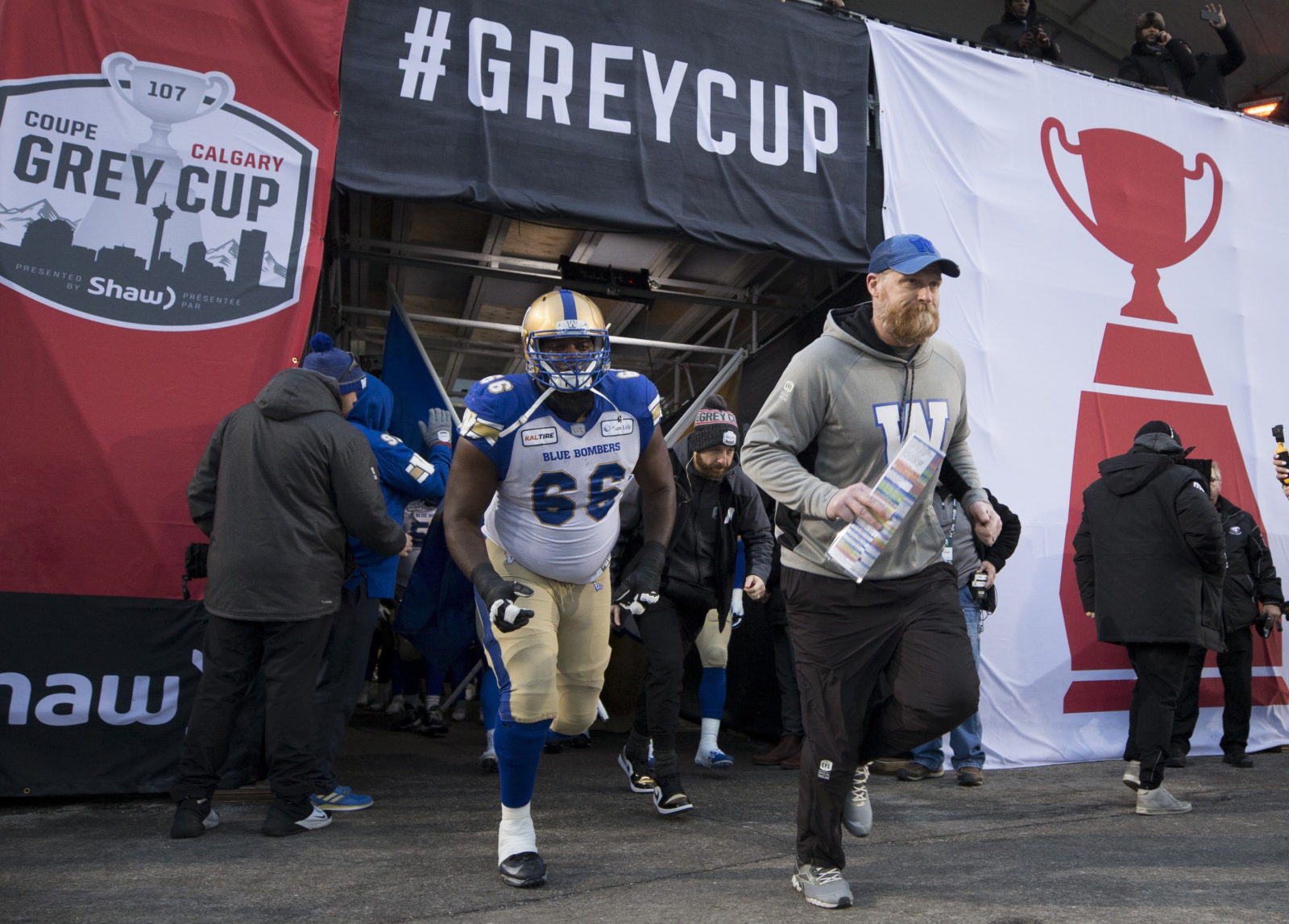 O’Shea leads his team out onto the field ahead of the 107th Grey Cup (BlueBombers.com)

BLUEBOMBERS.COM: You’re still getting those reactions?

O’SHEA: I was at the Ice game the other night and I ran into a 50-year season ticket member. And then I ran into another guy and they’re all thanking you. There are little kids coming up to you and wishing you well. The stories keep coming and each one of them is tied with their own personal emotion and passion. It’s really cool… and I don’t think they’re going to stop for a while.

BLUEBOMBERS.COM: One more… what is it about your staff and working with Kyle Walters and Wade Miller that has made this all work?

O’SHEA: We’ve grown and figured out our way. We were all lacking experience when we started and that’s as much a part of why it has taken us this long as anything, right? We had to drill through an entire roster. But a part of it is we were all young in our roles.

BLUEBOMBERS.COM: Thanks for doing this, I know this is probably way too much of talking about you, but…

O’SHEA: It sure is. I wouldn’t mind if the slant of this somehow went to the team. That’s a pretty phenomenal group and the way they played in the Grey Cup cannot ever be understated. I’ve seen a lot of Grey Cups and maybe didn’t pay as much attention as I should have, but to see a team play that well in a Grey Cup game… I’m not sure I’ve seen it that often.