Ezeonwurie preparing for jump to U Sports ranks

Ezeonwurie preparing for jump to U Sports ranks

Opposing football players might want to think twice about trying the intimidation stuff out on Chinedu Ezeonwurie.

He’s too smart to have any part of that.

The 18-year old student athlete at Cathedral High School, located in a tough socio economic area of Hamilton, has heard the chatter many times, and tuned out the name-calling. In fact, he considers it to be a sign of respect to greatness and talent.

For those who know the sport of football, Ezeonwurie may very well be one of the top 50 teenage defensive linemen in the country. Some say, he’s even better.

While it may be too soon to start making comparisons, or to draw conclusions, there’s a great deal to tinker with in the area of expectations for a player with great judgment, and expertise. 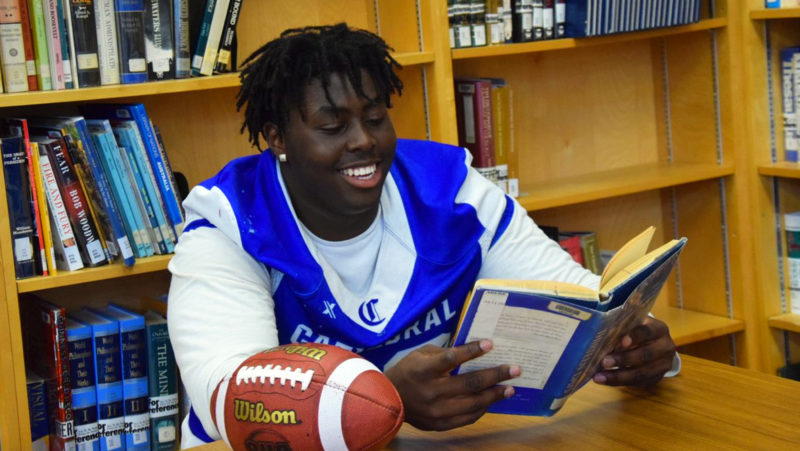 Sturdy and powerfully built, Ezeonwurie has been displaying his athleticism as a key member of the gridiron team at Cathedral. While the team hasn’t won many championships lately, it has been in the public eye because of players like Ezeonwurie.

A citywide high school all-star, one who has competed in the All Canada Bowl and chosen defensive Most Valuable Player, the 6-foot-1, 285-pound lineman had actually tinkered with the idea of playing basketball.

At Cathedral, he played rugby and was twice a member of the school championship team. Last year, he even tried shot put, and left the citywide finals with a bronze medal.

Aside from the spotlight on his football talent, there’s also something called artistic aptitude, kindness and generosity shown by this youngster.

It could be when he’s helping the elderly at a senior citizens home, playing the drums at special church events, serving up food to the needy, or in his part time job, doing his own version of master chef cooking at a major restaurant chain.

“I’m just a caring guy and very appreciative for what I have,” said Ezeonwurie, who was born in the Steel City, but his family roots trace back to Nigeria. “Calm, cool and collected, that’s me. But now, football has taken over and I have to get a bit more serious.”

While Ezeonwurie is in his final year at Cathedral, he’s also focusing on something he hopes will take him beyond the next level of the sport: the pros. That means, heavy concentration on pass move rushes as well as the easy way to get to the opposing quarterback.

“When I first saw him, he needed a lot of work and he’s since become one of the best linemen that I have coached,” said Tony Tassone, who has seen many players in his 24 years as a coach. “His growth, mentally and physically, have been incredible. Self-motivated, gone to football camps, always learning and he has a great personality.”

Watching him play, Ezeonwurie’s instincts and intelligence at getting the job done remain top notch – and it’s a big part of his success story throughout social media. The confidence factor is huge, too, and, on the football field, his brilliant performance has repeatedly caught the attention of recruiting university scouts in Canada and the United States.

That chapter is now closed as Ezeonwurie, who should be on his school list for Athlete of the Year, has decided to stay right at home and verbally committed to a post-secondary education at McMaster University.

Bright, and often ahead of the game, he’s already got it figured out: football for four years along with getting his Degree and pursuing a career in education.

For the kid with the nickname “Chinzo”, his first taste of playing football occurred back when he was in Grade 4 at École élémentaire catholique Saints Pierre et Paul. At the time, his best friend, every weekend, went to play football, and Ezeonwurie finally caught the bug and chose to tag along.

“(Football) looked interesting and I thought if my friend can play, I’d give it a try, too,” he said. “Turns out, things worked out for the best.”

Two years later Ezeonwurie tried out, and was quite a hit making the Hamilton Junior Tiger Cats.

Little did he know back then, that what he, and his parents, thought was a minor leg injury likely caused from a chop block on him that he remembers, turned out to be more serious.  Over the years, the pain got intense, then eased off. At one time, he wore a knee brace. It was in grade 10, when Ezeonwurie had experienced enough pain and decided to get the advice of a doctor.

“They told me that I had been playing with a torn miniscus for four years and I was fortunate that things didn’t get worse,” he said. “It was repaired and I am fully recovered and now doing what I enjoy – drilling opponents on the football field.”

Both passion and fire to excel is something embedded in Ezeonwurie.

“Nothing comes easy in life and I have had to work hard and keep working hard. People helped me out along the way, and I want to help others – to make a positive impact on the lives of young people.”