Christmas Eve, 2019. An epic tale begins. One that sees Santa Claus drop in on all nine CFL cities during one adventurous, peculiar journey.

What follows is a brief overview of those adventures. A more detailed account will come in the new year, in an incredible 16,000-word essay from CFL.ca Senior Writer Chris O’Leary who is embedded with Santa and his elves for the trip. It will be entitled “Kringle All The Way: St. Nicholas’ Incredible Rise From Isolated Northern Outpost To QB1 Of Christmas Elves.”

That’ll be a great read. This one? Meh. Nevertheless…

Santa first lands in Montreal, where he finds a solitary figure jumping back and forth excitedly, head bobbing as its weight shifts from left to right, over and over again.

“I just love it when the little ones get so overjoyed upon my arrival,” says a delighted ol’ St. Nick as he approaches. “How old are you, little fella?”

“None taken,” says Santa, reaching into his sack. “Here are the leg warmers and 80’s exercise tapes you asked for.”

Flying out of Montreal, Jones cranks up some Led Zeppelin on the stereo and continues to bounce back and forth, causing such great turbulence that the wobbling sleigh is slowed immensely.

In Ottawa, new REDBLACKS head coach Paul LaPolice offers to map out the rest of Santa’s route for him, vowing to get him back on track.

“The worst thing you can do is be predictable,” says LaPolice, furiously scribbling on a white board behind his desk, a blur of Xs and Os and candy canes and antlers soon covering it entirely. “Makes you easier to stop, of course,” he says, dramatically tossing his marker over his shoulder in a final flourish.

“Not sure anyone really wants to stop me,” replies Santa, removing his hat and scratching his head. “Straight lines have always kind of worked for me,” he mumbles.

» Cauz: Plenty of Christmas magic in 2019
» Steinberg: 5 CFL presents that Santa should hand out
» What non-playoff teams should get for Christmas 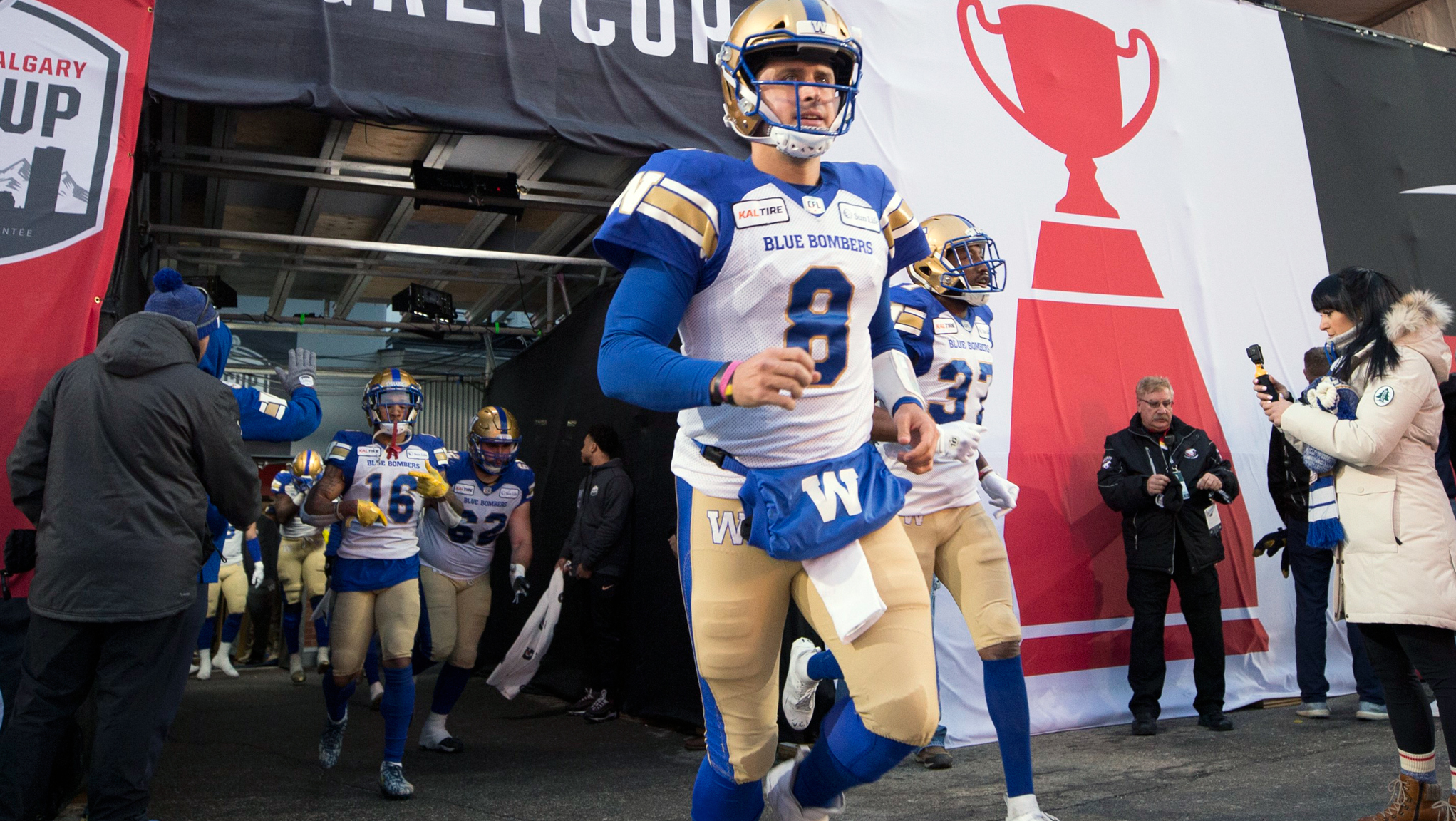 But LaPolice was already out installing the scheme with the reindeer. He has Donner run a streak pattern, while Prancer circles back behind the  sleigh, Comet plunging straight forward. As Khari (formerly known as Dancer) fakes left and then attempts to come across on a jet sweep, all of the reindeer fall to the ground in a tangled mess of hooves and leather straps.

“Maybe we’ll go a little more vanilla from here on out,” grumbles LaPolice, as he climbs aboard the sleigh.

In Toronto, Santa and Pinball Clemons get bogged down discussing the competing virtues of each other’s signature greetings. Clemons believes “how you doin’?” is jollier than “ho ho ho.”

To complicate matters, the two veer off into a disagreement over whether “Die Hard” is, in fact, a Christmas movie.

“I don’t even BEGIN to think about this trip,” an emphatic Santa begins, “until Hans Gruber falls from the Nakatomi Tower.”

Now, with Santa even farther behind schedule, Clemons promises to fire up the reindeer with a passionate pep talk, which will surely result in the team recovering any lost time, in a steam-snorting, turbo-boosting response.

It’s a good plan but it fails when the reindeer line up after the talk, each insisting on getting an autograph and a selfie with Clemons before departing.

Santa stands by, impatiently. “How you doin’?” he says, sarcastically, under his breath. Then: “That’s not half bad, actually.”

Touching down in Hamilton, Santa is met by Ticats’ broadcaster and CFL.ca analyst Marshall Ferguson, who gives him an extended power-point  presentation on the crew’s tendencies for the trip so far, breaking it down into categories such as “chimney circumference to entrance time ratio,” and “reindeer stopping distances as a product of rooftop slope angle.”

“This is all very illuminating, Marshall,” says Santa, “and I thank you for it.”

“But to me,” he continues, spreading his arms wide, “Christmas deliveries are all about gut feel and spirit. Not about analytics.”

Marshall replies with a quick “okay, Boomer,” and the gang gets airborne once again, setting their sights on the home of the Grey Cup Champions.

In Winnipeg, Santa loses more time when he and Mike O’Shea get into a deep conversation about beards, stroking each other’s in great admiration as they talk.

As Santa bids the coach goodbye, O’Shea asks where his present is.

“Sorry, Mike,” replies St. Nick. Your answer to the sex question at Grey Cup plunked you down firmly on the ‘naughty’ list.”

Back out on the field, where Santa had landed, he finds a shirtless Chris Streveler aboard the sleigh, chomping a cigar, swinging a giggling elf over his head, and shouting “Let’s do this! Let’s do this!” 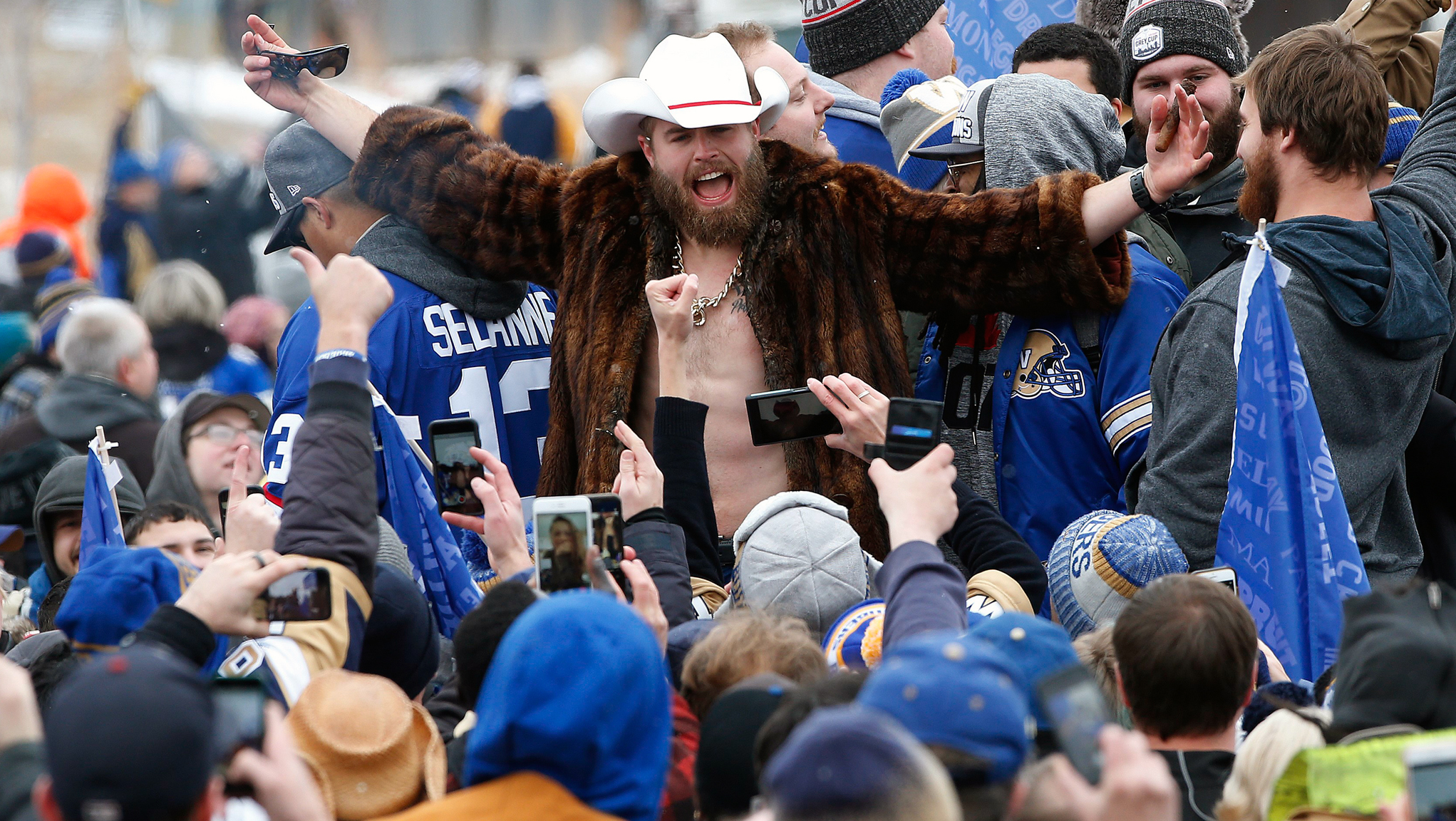 After a quick trip to the Rum Hut for supplies, they are off again.

Landing next in Regina, St. Nick – now himself shirtless and swigging something Streveler calls “Greygg Nog” from The Cup – removes the goal post from the north end zone at Mosaic Stadium.

He replaces it with a brand new goal post. One with a much slimmer crossbar. “Got a lot of letters with that wish,” he says to himself. “A LOT of letters.”

The next stop is Calgary, where the crew lands incredibly close to a sideline, but continues sliding, coming to rest against a retaining wall where the stands begin. Santa celebrates the landing, saying he “stuck it like a Christmas card stamp.”

“After further review by the North Pole Command Centre,” he begins, “the ruling on the field stands. Good landing.”

Dickenson grumbles something about the “Candy Cane Mafia” but is soon smiling broadly when Santa tells him he can ride Quick Six up at the head of the reindeer team for the rest of the journey.

Heading north to Edmonton, the crew settles in at Commonwealth Stadium. Striding through the door of the head coach’s office, Santa stops dead in his tracks when he sees a beaming Scott Milanovich seated there.

“Oh, no,” gasps Kringle. “We were aiming for Edmonton. How did we end up in Florida?!” He glances over his shoulder towards the sleigh and yells “LaPo! What the H-E-double peppermint sticks?!”

“No, no, no,” exclaims Milanovich, jumping from his desk. “You’re good. I’m back, is all. I’m the new head coach in Edmonton.”

The Waggle, Episode 191: The annual holiday show with gifts for each team!

EPISODE OVERVIEW: We quickly touch on the most recent coaching moves before bringing in Don Landry to help us think of gifts for every CFL team!

With that, Jason Maas bursts in. “My God,” he yells. “How do you screw that up? I mean, come on! I got on your sleigh in Regina. This is basic!” He tips over Milanovich’s Christmas tree and disappears into the frosty night.

After soaring over the Rockies, the Jolly Old Elf decides he’ll make up for lost time by staying airborne over Vancouver while Streveler, Maas, LaPolice, Clemons and all the elves just fling packages out into the night air, indiscriminately.

Below, a streaking entity in orange and black gathers in each and every one of the parcels, depositing them safely and securely at each home. From the back of the sleigh, play-by-play man Chris Cuthbert excitedly utters “did you see that?” with every present that is nabbed.

“Great garlands of glee,” laughs an elated Santa. “Bryan Burnham is the best free agent elf signing I’ve ever made.”

Burnham’s heroics put the team more than back on schedule. In fact, they are now so far ahead of schedule that Santa considers Streveler’s suggestion that the crew go and crash Commissioner Randy Ambrosie’s Christmas party.

“I dunno,” says Santa slowly, stroking his beard. “It’s pretty late. What if it’s over already?”

Santa leans back in the driver’s seat, feeling giddy over how the evening has worked out. He snaps the reins.

“HO-HO…” he begins, before suddenly breaking off.

– with files from Chris O’Leary