How each team can replace their departing players? 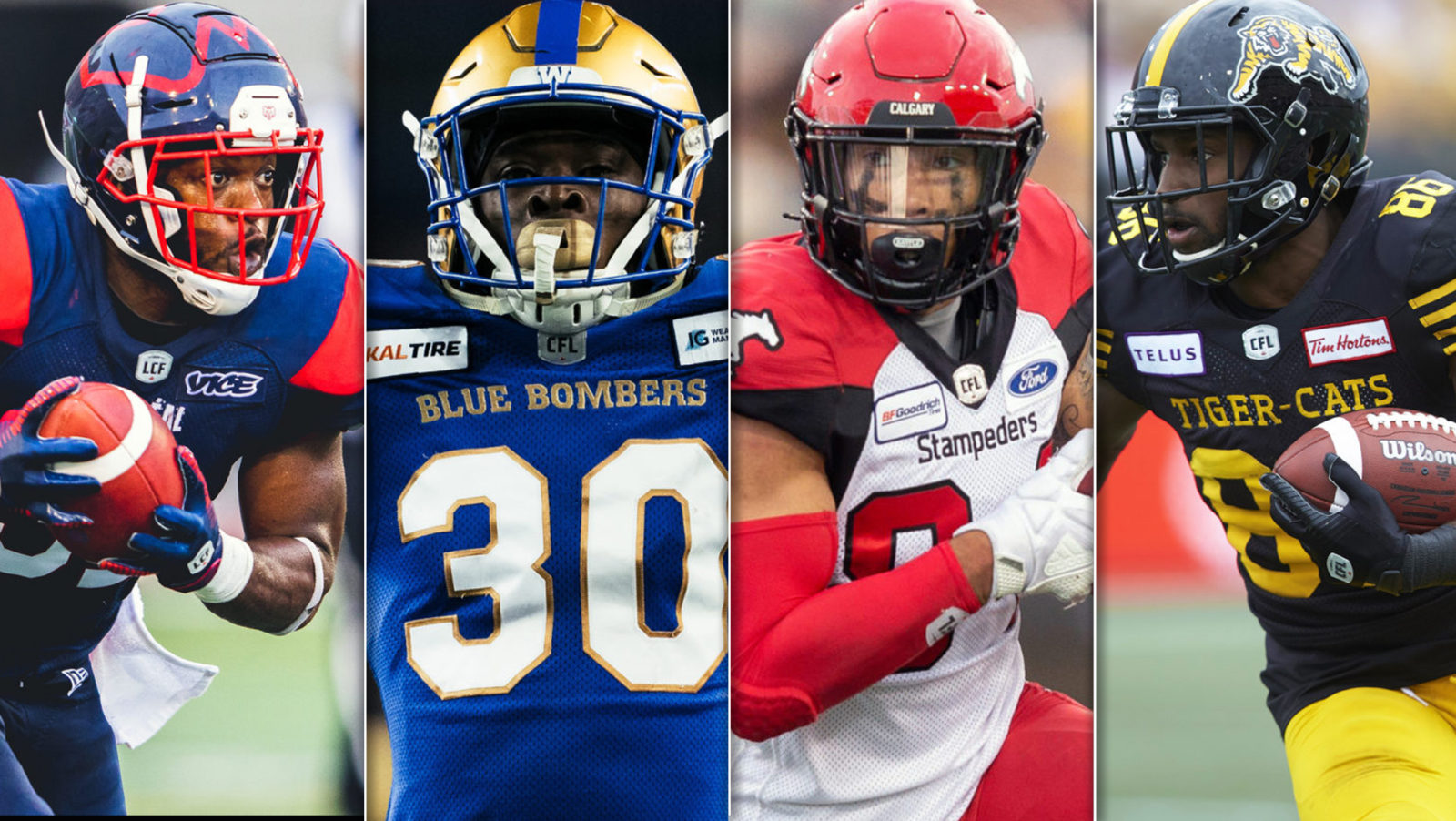 How each team can replace their departing players?

TORONTO — Over the past three days, the landscape of the CFL has changed, with several players being granted their releases in order to pursue opportunities in the National Football League.

Among the players that were allowed to walk were six All-Stars and a number of players that had breakout 2019 seasons.

There is always turnover during the CFL off-season, but now a number of teams will be trying to fill holes, either internally or through free agency.

Here’s what each team can do to replace the players they have lost.

EPISODE OVERVIEW: We’re quickly dropping in to wish you a happy new year, and give you a new years resolution for every team in the CFL.

The defending Grey Cup champions are the team that has — to this point — lost multiple bodies to the NFL. Now, that is to say it’s just two individuals, but they were integral parts of the Bombers’ defence in 2019 and helped them take home the title.

Winston Rose was the first man to be granted a release. The 26-year-old joined the Bombers ahead of the 2019 season after spending the 2017 and 2018 seasons with the Ottawa REDBLACKS and BC Lions, respectively. With his third team in as many CFL seasons, Rose had his best season north of the border.

He set new career-highs in tackles (58) and interceptions (9) — which was a league-high this past season. He also returned one of those to the house. From Weeks 4-7, Rose nabbed five interceptions, with a multi-pick game against Ottawa bookending that stretch of hot play.

Rose has signed a reserve/future contract with the Cincinnati Bengals.

The #Bengals have signed free agent CB Winston Rose to a Reserve/Future contract.

Shortly after Rose was granted his release, Marcus Sayles — his running mate in the Winnipeg secondary — received the same.

The 25-year-old West Georgia product was in his second season with the Bombers. He proved himself to be a fixture in all facets of the game during his time in Winnipeg, posting 136 tackles, seven special teams tackles, two sacks, six interceptions — two of them returned for touchdowns — and five forced fumbles.

In 2019, Sayles had 64 tackles, one sack, three picks and three forced fumbles. He also had a blocked punt that he returned for a touchdown.

Sayles has signed a contract with the Minnesota Vikings, according to Bombers radio voice Bob Irving.

The Bombers do have some depth at the defensive back position, but they could be looking at an interesting crop of free agents to fill the departures of two of their pillars in the secondary.

With the team in need of a new starting field corner and halfback, there are some big names that could provide immediate impact. The first two that come to mind are Saskatchewan Roughriders DBs Nick Marshall and Ed Gainey, who are both primed to hit the open market in a little over a month.

Marshall led the Riders with five interceptions while making 39 tackles in 17 contests while Gainey had 56 tackles and a pair of picks while providing veteran leadership for the Green and White.

The pair know the rivalry well, and after Winnipeg lured Willie Jefferson from Riderville, it’s possible they’d be open to a move to Manitoba.

Edmonton is also a team that could have several defensive backs head to market. Josh Johnson, Monshadrik Hunter and Tyquwan Glass are all pending free agents.

Johnson was all over the secondary for Edmonton in 2019. He played boundary corner and halfback predominantly while also seeing some time at field corner. He capped off a solid first season in Edmonton with a three-interception performance against Montreal in the Eastern Semi-Final. Hunter also served as a starting halfback for the Esks, making 61 tackles, one sack and a pair of interceptions while playing in all 18 games this past season.

Glass, 25, played in 14 games last season, making 29 tackles and another six on special teams while adding three picks. He got an extended look with veteran Anthony Orange battled injuries and ran with the opportunity. Those glimpses he showed should bring in a lot of interest from opposing organizations.

Winnipeg does have some options in-house and on the market. It’s up to them how they rebuild a portion of their secondary heading into 2020. 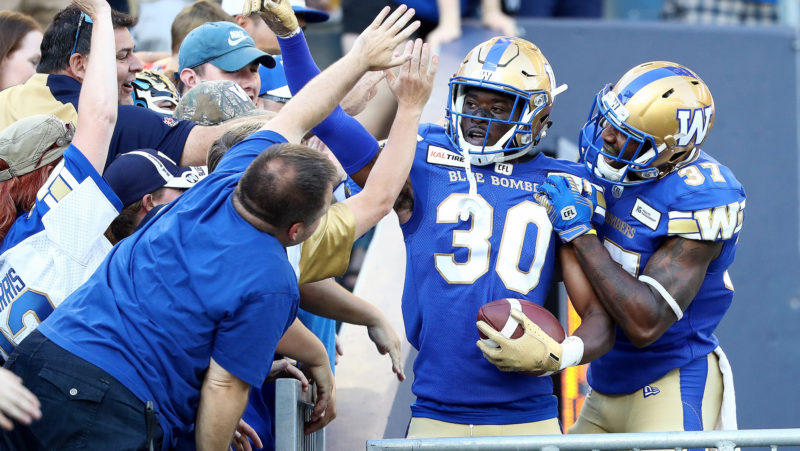 The Stampeders lost arguably the biggest piece out of any of these teams when they granted 2019 All-Star Reggie Begelton his release on Thursday.

Luckily for the Stamps, they proved last year that the receiver position was one of strength for them, and they have almost all of their biggest contributors from 2019 under contract for next season.

With Begelton now out, the team will likely have a heightened urgency to ink Canadian Juwan Brescacin to a new deal. He had a strong start this past season before he was forced to sit out the majority of the year due to injury.

Kamar Jorden will have another off-season to get back to game strength. The star pass-catcher returned for the Western Semi-Final after suffering a gruesome leg injury during the 2018 campaign. He could instantly replace Begelton’s production from this past season.

He and Eric Rogers will likely be the one-two punch in the slot for the Stamps in 2020.

This is a big off-season in terms of re-tooling the secondary for the Stamps. On top of Roberson, starting halfback Brandon Smith retired and DaShaun Amos and Courtney Stephen are both pending free agents.

Royce Metchie remains and will continue to be a stalwart at safety for Calgary. Starting boundary corner Raheem Wilson will also return and Jonathan Moxey, who played behind Amos, could also see some more reps at halfback in 2020.

There will need to be some additions through free agency. A replacement for Roberson will be the top priority. The Stamps could be vying for Marshall as well and BC Lions field corner Garry Peters could also be on their radar.

With their success over the years, Calgary should have no problem bringing players in through free agency.

Bralon Addison is NFL bound after the Ticats allowed him to walk on Thursday.

The 26-year-old was a breakout star for Hamilton in 2019, making 95 catches for 1,236 yards and seven touchdowns while adding 218 yards and another score on the ground.

With his departure, the Tabbies are down a vital contributor in the slot. They also need to get fellow slot pass-catcher Luke Tasker signed, but who can step in and fill the shoes of Addison going forward?

Marcus Tucker could be the most logical person to step into that role. The 27-year-old filled in where needed in 2019, playing behind Addison at times as a backup. He also made starts during the year due to injuries. While appearing in 15 games, he caugth 38 passes for 475 yards and two majors. He gained 197 of those yards after the catch and will be heading into his second year with the Tabbies.

Another candidate may be Jalin Marshall. The 24-year-old Ohio State product was signed ahead of the 2019 campaign following a stint in the AAF. He caught just eight passes over eight games during the year, but he turned those single-digit catches into 139 yards.

He proved in his time with the Buckeyes that he was a player who could make defenders miss in a multitude of situations, including in jet sweeps and end arounds — where Addison was utilized at points by offensive coordinator Tommy Condell.

There could also be a chance that, due to the lack of Canadian receivers on the roster, the Tabbies try and nab one in free agency to solidify their pass game further.

They’ve got a lot of options given that they don’t need a top receiver, just a solid complimentary piece to 2019 MOP Brandon Banks.

After having one of the strongest running back committees in the league down the stretch, the Montreal Alouettes will now have to start life without 2019 standout William Stanback.

The 25-year-old finished third in the league with 1,048 rushing yards on the year while getting into the end zone five times on 170 touches. He parlayed his best CFL campaign to date into a contract with the Raiders, who will be making the move to Las Vegas for the 2020 season.

On top of losing their top rusher from 2019, the Als could also see backup Jeremiah Johnson go to market. They have a few bodies signed for 2020, but they’d be best to grab one of the established names that will be available in free agency.

In terms of free-agent backs, the biggest name available is C.J. Gable. There’s a chance that the Eskimos look to keep him but there’s also a chance that they opt to go with the younger Shaq Cooper instead. If either back is available, they should have tons of interest.

Don Jackson is also an intriguing name to keep an eye on. The 26-year-old finished with 924 rushing yards in 13 games during the 2018 season before injuries derailed him this past year. With the solid play of Ka’Deem Carey in 2019, Jackson could be looking for a new home.

Could a reunion with former back Tyrell Sutton happen? Who knows with the turnover during the off-season. With his solid showing in Hamilton in 2019, it would be an interesting storyline to watch.

With Montreal leaning heavily on Vernon Adams Jr. as the season went on, running back may not be a spot of high importance for the Als. However, it’s a position they can’t ignore addressing for next year. 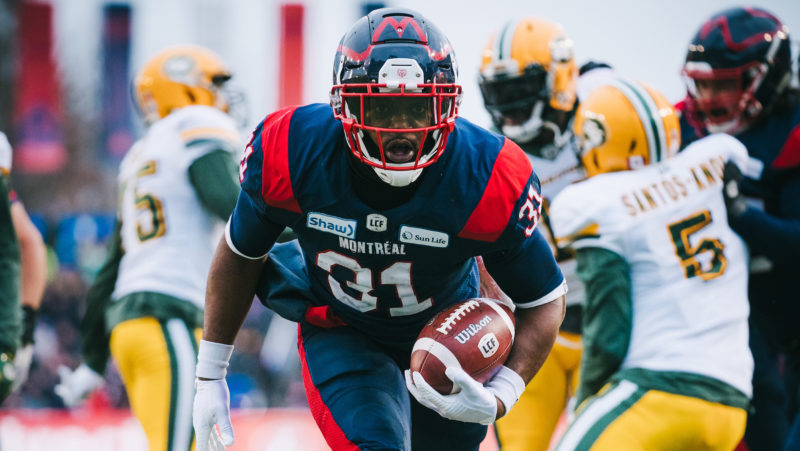 Montreal Alouettes running back William Stanback scores a touchdown against the Edmonton Eskimos in the Eastern Semi-Final. (Johany Jutras/CFL.ca)

Edmonton is going to be looking to patch a hole in their defensive line after the team allowed Nick Usher to explore his NFL options.

The 24-year-old played in all 18 games for the Esks in 2019, making 36 tackles while adding six sacks and three forced fumbles.

Usher will be joining Stanback in Las Vegas next season, according to 3DownNation’s Justin Dunk.

Luckily for the Eskimos, they have more than enough depth on the defensive line to make up for the loss of Usher.

They have 2019 fourth overall pick Mathieu Betts, who was a late addition to the squad in 2019. He joined the Esks in September after being a late cut in the NFL. He was able to sit back and learn from the veterans playing on the team’s D-line, but now, he’ll be expected to step up and have a bigger role in 2020.

He did, however, line up on the opposite end as Usher, so the team could opt to either shift him over or move a starter into his spot in order to make Betts a starter. He did have experience playing on either edge during his collegiate career with Laval.