Steinberg’s MMQB: What does the future hold for Masoli, Evans? 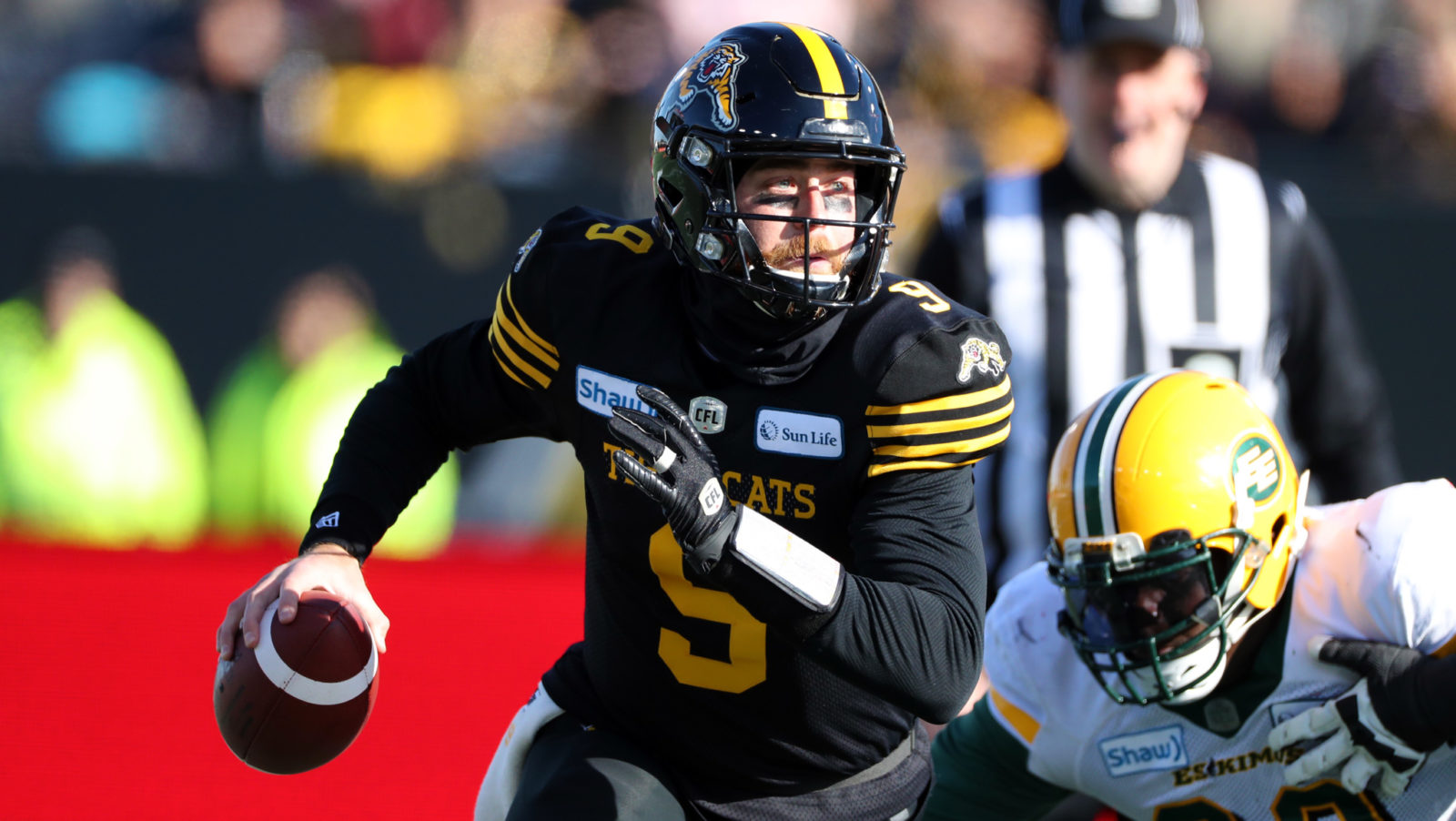 Steinberg’s MMQB: What does the future hold for Masoli, Evans?

A potential quarterback dilemma has been developing in Hamilton since August. With 2018 East Division Most Outstanding Player Jeremiah Masoli signing a new deal, that dilemma is front and centre heading into training camp. Is Masoli still the incumbent? Or did understudy Dane Evans, also under contract, do enough in 2019 to make this an open competition?

When Masoli went down with a season-ending knee injury in Week 7, no one knew how the Tiger-Cats would recover. Thanks to Evans, though, Hamilton didn’t miss a beat. Evans went 10-3 as a starter and helped the Ticats to an appearance in the 107th Grey Cup. Having two players of that caliber is a good thing, but it does leave Head Coach Orlondo Steinauer with an interesting decision.

There are a lot of things that go into that decision, too. What is Masoli’s health situation, first and foremost? The guy sustained a torn ACL in late July, which typically has a six-to-nine month recovery period. Even if Masoli’s recovery ends up on the short end of that spectrum, we’re talking about recovery eating into a good chunk of his off-season training.

As such, it’s anything but a guarantee Masoli will be game ready come Hamilton’s pre-season opener in late May or their Week 1 game on June 13. If that were the case, Evans would get the call in Week 1 with an opportunity to build on his 2019 accomplishments. If he were to pick up where he left off, replacing Evans would be a hard thing for Steinauer to do.

In saying that, Evans has yet to cement himself as a bona fide CFL starter. He performed at a high level in Masoli’s wake, but year two is always a telling year for a quarterback that burst onto the scene the prior season. If Evans does see significant time as a starter in 2020, he still has boxes to check off on his way to being a cemented number one.

The best-case scenario is simple for Hamilton: an open quarterback competition at training camp. That would mean a fully healthy Masoli come May, which isn’t out of the question at all. It would also mean a pair of high-end pivots battling it out in camp and the pre-season to determine the best option for the Tiger-Cats. I’d be here for that all day.

One thing that doesn’t make sense is a trade, at least right now. There’s too much uncertainty surrounding Masoli’s health to start the season. There are also questions surrounding what type of quarterback Masoli will be once he’s fully recovered. After all, he’ll have missed a lot of time and is coming off a serious injury.

It would make more sense for the Ticats to explore a trade once the situation starts to play itself out a little more. Maybe it’ll be clear Masoli is back to MOP form and needs to be the guy. Or maybe we’ll see Evans keep rolling and present Hamilton with a more affordable option, thus giving them more salary cap flexibility. Exploring a trade at that point, whenever that might be, makes more sense.

At the very worst, the Tiger-Cats could easily go through the season with both guys under contract, and with both guys starting games. It worked all right for Ottawa in 2016, didn’t it? That year, a younger Trevor Harris and a veteran Henry Burris shared, and competed for, starts all season long. The REDBLACKS ended up winning the Grey Cup that year, which shows you having two number one guys isn’t an impossible situation to navigate.

Whatever happens in Hamilton, I can’t think of a more fascinating story to watch play out in the early stages of the 2020 season. They’ve got two great quarterbacks under contract and now it’s on the Ticats to get the most out of that position of strength.

The Calgary Stampeders said goodbye to three key members of their 2019 team in a blink of an eye last week. The Stamps announced Thursday receiver Reggie Begelton would be exploring opportunities in the NFL. The following day, Calgary also released defensive back Tre Roberson for the same reasons and traded quarterback Nick Arbuckle to Ottawa. While none of the moves were overly surprising, it was still a significant 24 hours for the organization.

In Begelton, the Stamps are saying goodbye to one of the CFL’s most dynamic and explosive receivers. Begelton finished 2019 with 1,444 receiving yards and 10 touchdowns, both good for third overall behind Brandon Banks and Bryan Burnham, in both categories.

I wonder if General Manager John Hufnagel steps out of character next month and looks to make a splash in free agency. Not usually something we’ve seen in Hufnagel’s tenure, but Calgary has options to help replace Begelton on the open market.

I believe the Stampeders have been very close to acquiring Toronto’s S.J. Green at different times over the last two seasons. Well, Green is a pending free agent, so seeing him end up in Calgary wouldn’t be a surprise whatsoever.

A little more pie in the sky is the thought of Derel Walker in red and white. Walker had his ups and downs in year one with the Argos, but that seemed far more about curious usage than anything else. Walker showed on multiple occasions he’s still an elite receiver in 2019 and would be a great fit with Bo Levi Mitchell. Whether there’s an actual chance of that happening is another story, but it’s fun to think about.

Roberson’s case is a little different, however, as replacing one of the league’s elite shutdown corners is no easy task. Roberson and the retiring Brandon Smith formed a lockdown corner-half pairing for much of 2019, which turned their side of the field into a no fly zone for the second half of the season. There’s no coincidence Roberson had only one interception over Calgary’s last eight games…no one wanted to throw anywhere near him.

The good news is how well the Stampeders have been able to cope with key losses in their defensive backfield in recent years. Calgary has said goodbye to All-Star caliber DB’s Ciante Evans and Tommie Campbell each of the last two off-seasons and hasn’t really missed a beat. They’ll need to keep that trend going after Roberson’s departure.

The least surprising move was the Arbuckle trade, however the destination caught a number of people off guard. Toronto seemed like the odds-on favorite to land Arbuckle, whether it were to be in free agency or in a trade for his rights. Instead, it was Ottawa landing Arbuckle and his exclusive negotiating rights.

I like the move for the REDBLACKS, even though there’s no guarantee he signs there. I like the move even more for Calgary, though. Arbuckle is a pending free agent with an eye on chasing a CFL starting job, which wasn’t in the cards with the Stamps. To get a nice return for a guy that wasn’t coming back is a win.

Calgary is guaranteed a third round pick in the Arbuckle deal and could get an additional pick if he ends up signing in Ottawa. This would be a different conversation had Arbuckle been under contract for 2020, but to get a return like that simply for negotiating rights is nice work by Hufnagel and company.

The Stampeders are used to replacing key figures in the off-season. One year ago, Calgary was saying goodbye to key names like Alex Singleton, Jameer Thurman, Micah Johnson, Ja’Gared Davis, and the aforementioned Evans…and that was just on defence! They seemed to do all right, though, as the Stamps finished with one of the league’s top defensive units once again.

Dealing with the losses of Roberson, Begelton, and Arbuckle will be a challenge for Calgary. By no means, though, is it a new challenge.