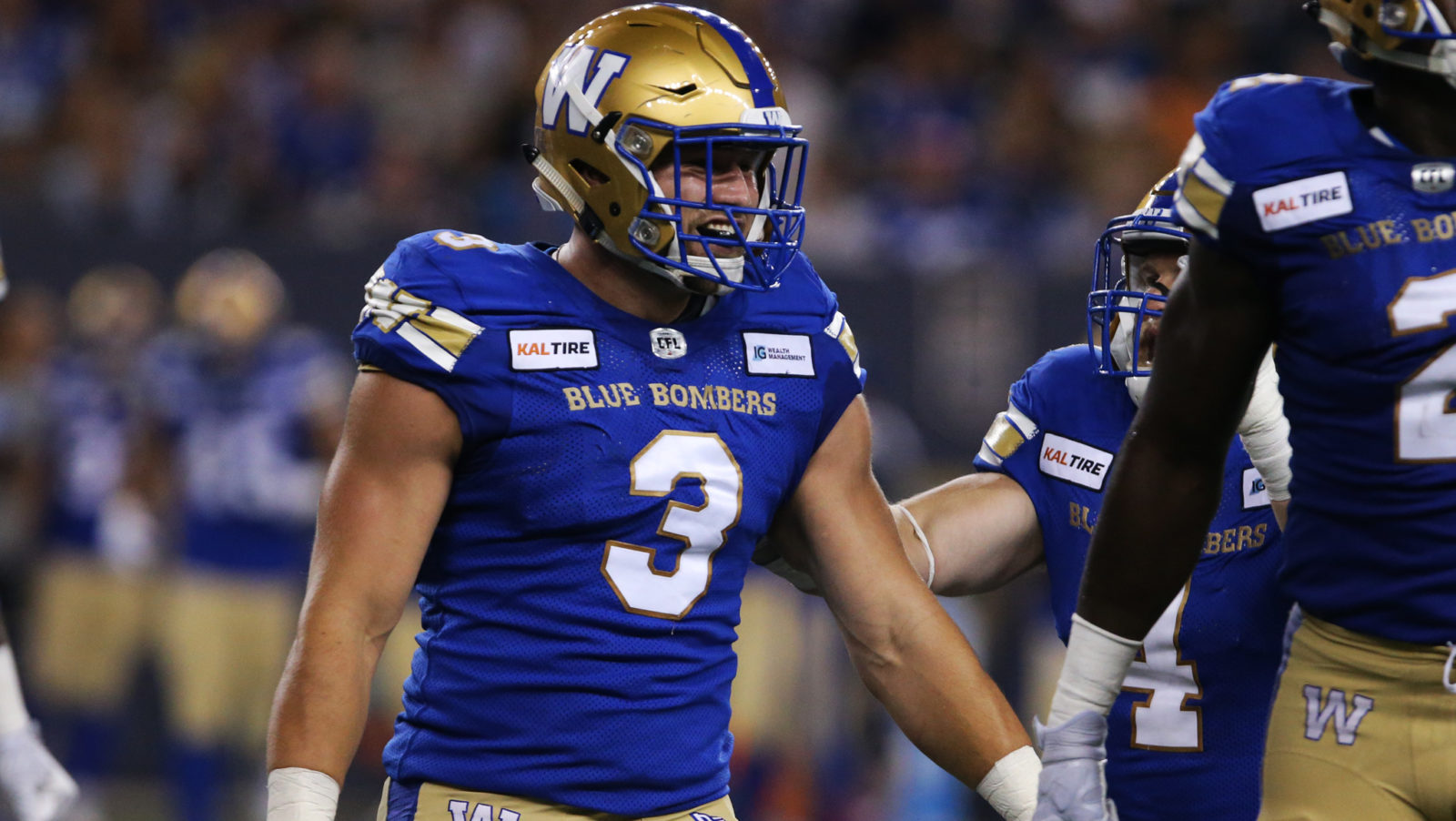 It’s been a few months since Thiadric Hansen and his Winnipeg Blue Bombers hoisted the Grey Cup, defeating the Hamilton Tiger-Cats for the coveted trophy, and it’s just finally starting to sink in.

“I’m slowly realizing that I’m a Grey Cup Champion,” Hansen said over the phone from his hometown in Germany on Wednesday. “I’ve been getting a lot of love in Germany, a lot of people hitting me up. Also, when I walk around the city some people just come up to me and I’ve been in the newspaper and everything. So it’s been pretty great here.”

After the Bombers ended their long-standing Grey Cup drought in November, Hansen stayed in Winnipeg for a week to celebrate with his teammates and the city. Then the 27-year-old headed back home to Germany to start his off-season training as he gets set for his second season in the CFL.

RELATED
» CFL Global Combines underway around the world
» Checking Down: News and notes on the Bombers
» Bio: Thiadric Hansen by the numbers

THIADRIC. HANSEN. They heard that one all the way back in Germany.@shaw_cfl #GreyCup #Bombers pic.twitter.com/ShWpDQG1Dx

Hansen was one of 17 global players to dress in a game in 2019, after being selected by the Bombers second-overall in the CFL’s first-ever European draft.

Once he made the team, Hansen began his football journey as many players do, on special teams, and worked his way onto defence, registering five defensive tackles, two forced fumbles and a sack in the regular season. But perhaps he’ll be remembered most by his thunderous special teams tackle in the Grey Cup, where he took out both a blocker, Mike Daly, and the returner, Frankie Williams, in one hit.

“Hansen’s play in the Grey Cup displayed his power, but more importantly his understanding of leverage,” said CFL.ca’s Marshall Ferguson. “He got up underneath the chest plate of Daly, maintained his leg drive and kept eyes on Frankie Williams, the return man, resulting in one of the marquee plays of the 107th Grey Cup.”

Before his memorable season unfolded, Hansen made a promise to himself, saying in multiple interviews, including one with CFL.ca’s senior writer Chris O’Leary, exactly what he wanted to get out of his first season in Canada.

“I said I want to first make the team then I want to help out on scout defence and then make my way to special teams and have some playing time on defence as well,” Hansen remembered. “Then at the end, (I wanted) to go to the Grey Cup. I accomplished everything that I planned. It’s been great. I wouldn’t have thought at the beginning of the season when I came to Winnipeg that this was all going to happen.”

When the six-foot-two, 243-pounder did arrived in Winnipeg, he had no idea that he would become a champion or make a fulltime switch to defensive line. He started as a linebacker, the position he played in Germany, but as the season went on, he transitioned to the trenches, playing opposite of Willie Jefferson at defensive end.

As someone who had never played the Canadian game before, Hansen relied a lot on his teammates to learn the nuances and differences. It was veteran Adam Bighill who put in extra hours with Hansen to teach him about the linebacker position, while the entire defensive line wanted put their two cents in when he made the switch to their unit.

“When I first came here, Adam Bighill helped me a lot,” Hansen said. “After meetings, we’d sit together and he’d just explain the game to me. We’d also go over the playbook and what I can do better here and there. When I switched to D-line, the whole D-line welcomed me with open arms. Everybody was helping me from Willie Jefferson to Drake Nevis to Jake Thomas.”

“I have a responsibility for other players who come after me. I want to represent the global program well.” 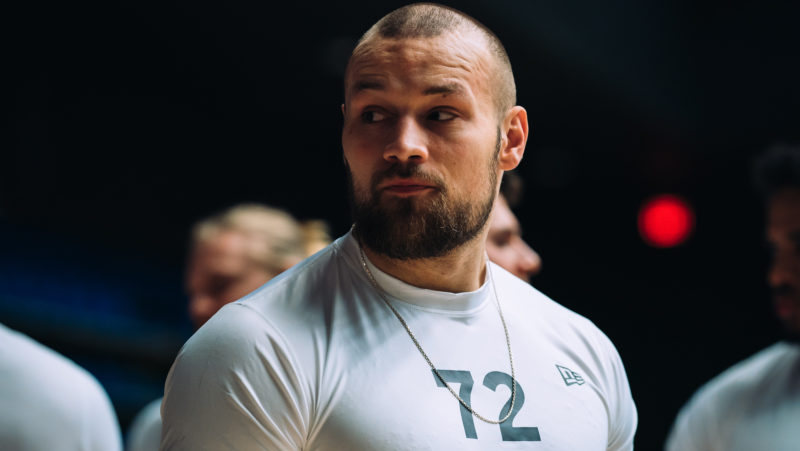 Thiadric Hansen was one of 18 Global Players to compete in the 2019 CFL Combine in Toronto (Johany Jutras/CFL.ca)

That willingness to learn and put in the work is what Hansen has started to be known for around the league. During Grey Cup Week at the Head Coaches Conference, Bombers bench boss Mike O’Shea credited Hansen’s work ethic and his eagerness to learn.

“The one thing I can say about Thiadric — or one of the many things — is his thirst for knowledge and his application of that knowledge, instant application,” said O’Shea in November. “He came to me one time and said I’m having trouble with this drill. I gave him 30 seconds of my time on how he could get better at the drill. Post practice, he’s doing the drill. The next morning pre-practice he’s doing the drill. The next week, when he – when he has an opportunity in that drill, he kills it.”

“I like to learn,” Hansen said this week, following the first of his two workouts scheduled for the day. “This is really the stuff that I really like, to learn to improve every time. And also, I have a responsibility for other players who come after me. I want to represent the global program well and it’s also for me, it’s my last chance to really play football professionally. I’m not the youngest, any more compared to the other guys.”

The CFL began its first Global Combine circuit earlier this month, the second year that the league as implemented a global aspect to its annual CFL Combine.

Almost a year ago was the beginning of Hansen’s career, as he was one of 18 Global Players invited to the National Combine in Toronto. He tested well, with his 38-inch vertical leap tops among global players and tied him for third overall with UBC’s Stavros Katsantonis. His 20 reps at the bench press tied for eighth overall and tied him for fourth among the global players.

While his numbers were impressive, it was when he strapped on the pads and competed in the one-on-one drills that set him apart and caught the eye of scouts and general managers.

“The global talent was diverse last year,” Ferguson said. “Hansen was clearly the most prepared of the bunch without even seeing him in pads on the field, which is where he truly excelled.”

Hansen will be in attendance at the Global Combine in Frankfurt, Germany on Jan 26. He’s been through the entire experience before; a combine, the draft, making a roster and winning a Grey Cup, and wants to be there to let hopefuls know they can continue their football careers outside of Europe.

“Just that it’s possible,” Hansen said. “Some people didn’t even know that it’s possible to play professional football in Canada. And even maybe think that we’re not good enough and all that. We have the athleticism in Germany. It’s just the quality coaching is missing and now (the CFL) gives you an opportunity right there.”

“Coach O’Sh mentioned it often in interviews that that I work really hard,” continued Hansen. “And I hope when they come over here (to Canada) they don’t just say, ‘oh, I made it now, I’m in the CFL, going to get money, rest and then get out the next year.’ (I hope they) just build a legacy of their own. Just be a receiver for a little bit longer and actually appreciate the chance that the CFL gave you right there and just use it.”