The Montreal Alouettes have gotten a lot of work done this off-season. The Als welcomed new owners earlier this month in Sid Spiegel and Gary Stern. Then, early last week, Montreal introduced hometown boy Danny Maciocia as the team’s new general manager. Both were significant announcements, but the most important guy was already in place: head coach Khari Jones.

In year one as a head coach at any level, Jones did an outstanding job leading the Alouettes to a 10-8 record and a return to the postseason for the first time in five years. His results were impressive in a vacuum, but even more noteworthy knowing he took over from Mike Sherman less than a week before the season started.

Long considered a great potential head coach, Jones delivered in year one. As a former quarterback, he worked seamlessly with Vernon Adams Jr. and seemed to get instant buy-in from his players. There’s no question he’s the right guy to coach this group of Alouettes, which is a huge asset to already have in place for new owners and a new general manager. More than anything else, it’s a load off their mind.

A successful 2019 campaign was a great first step for Jones. When I spoke with him last week from CFL off-season meetings, Jones was proud of what the team accomplished in 2019.

“I think one of the biggest things I learned was first that I can handle it,” Jones said. “I can handle the ups and downs and the stresses and all the things that go with it. That was important for me to know, you know, because until you get a chance to do it, until you get an opportunity to be in front of the team day after day…you still wonder a little about it. That’s nice to know it can be handled.”

But, as much as his first year was successful, Jones has much loftier goals than a 10-8 record and a loss in the Eastern Semi-Final. There’s good news, though: Jones gets to be the guy from the start of training camp, which is an exciting prospect for a guy who didn’t get that opportunity last season.

“Very excited,” Jones admitted. “It’s crazy because it’s hard for me to even sleep now at this time in the off-season. Usually guys are kind of getting away from the game and I’m thinking about, you know, what’s next and how we want to put together training camp and all the things that I wasn’t really able to do last season. I’m very excited about it and hopefully we can have a good start to the season.

“Now it’s just going back and seeing the things that I’d like to do a little differently or I’d like to maybe change things here or there. All these little things that go along with the job, I’m just excited about it, I’m excited about the opportunity to be able to do this and do it for a while. I’m a lifelong learner, so I’m just going to keep learning and keep figuring things out. I’ll still make some mistakes, but I just want to keep getting better at this job.”

With Montreal’s resurgence, the coming season presents new challenges for the returning group of players and coaches. Jones knows the expectations will be significantly higher, and he also knows his team isn’t catching anyone be surprise.

“The biggest thing now is just knowing that it’s going to be different. It’s going to be a different football season. We maybe surprised people (last season) and, you could say snuck up on people early on. I don’t think that’s going to happen anymore. They’ve seen Vernon, they’ve seen a lot of our team, and now they’ll work hard to be better against us.

“Now we have to take that next step in our maturation process and I’m excited about that, too. Every level of this game is a challenge and now I get to pose a different challenge to these guys. What do we do this season, what do we do for an encore? 2019 was a good year, but it wasn’t a great year, and hopefully we have that ability to have a great season. I’m going to put that challenge to the guys and I think they’ll respond.”

All the Alouettes did was respond to Jones last year. If I’m Macioca, Stern, or Spiegel, I’d be feeling pretty confident of that happening again in year two.

Lots left in the tank 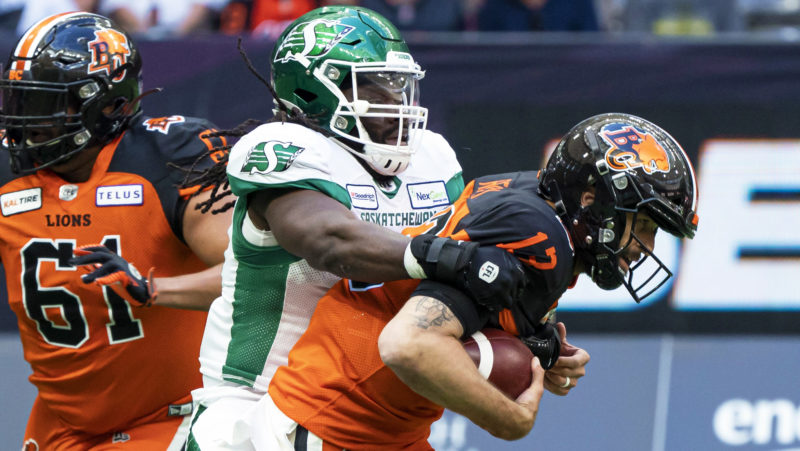 One of the most fascinating names in a star-studded 2020 free agency class is linebacker Solomon Elimimian after a resurgent first year with the Saskatchewan Roughriders. But, just over three weeks from the beginning of free agency, Elimimian remains unsigned.

This is an interesting situation to watch. At 33, some may have doubts about what the four-time league All-Star has left in the tank. I’m not one of them, though. In 2019, Elimimian once again proved he can play at an elite level, and can do so coming off a difficult season prior.

Remember, a wrist injury and subsequent surgery kept Elimimian out of all but four regular season games in 2018, which was frustrating coming off a record setting performance the year before. To add to the frustration, the BC Lions shockingly released Elimimian last winter, well into free agency.

All in all, Elimimian’s last year with the Lions was an unpleasant one. He was frustrated by the injury and didn’t like the way things ended, with GM Ed Hervey going as far to suggest Elimimian’s “time is up”. Understandably, Elimimian entered year one with Saskatchewan with a chip on his shoulder and redemption very much on his mind.

“I’d be lying to you if I didn’t say this (past) year didn’t have a little bit more of it, just because of how things were done,” Elimimian told me during Grey Cup week in Calgary. “I definitely didn’t agree with how things were done with the BC Lions, how they handled things. I tell guys that’s life sometimes, man, and you know, sometimes the biggest lessons come from the worst situations or the toughest situations.”

It’s safe to say Elimimian responded the right way. After missing all of training camp and the first three games of the season with a calf injury, he was back with a vengeance. Elimimian finished the year with 88 defensive tackles in 15 games, a pace that would have had him at 105 over a full season. Even still, he led the West Division in that category and was named a division All-Star for the sixth time. Elimimian proved something to his doubters, and more importantly, to himself.

“I’ve always been doubted,” Elimimian told me. “I was an undersized linebacker coming out of Crenshaw High School in Los Angeles, Only had one scholarship, NFL told me I was too small. 2010, my first year, first opportunity with the CFL, I was a CFL Rookie of the Year.

“I’m used to the hardships, I’m used to being in adverse situations, and I tend to respond, you know, positively in those situations. All in all, the season was a success, because it just re-affirmed in my mind that with the right mindset you can achieve anything and you can always prove doubters wrong and prove yourself right.”

With such a great first year with the Riders, it would be a natural fit for him to be back for another go, if the two sides can make it work. For his part, you can tell Elimimian was grateful for what happened in Saskatchewan and how they stepped up to the plate.

“They flew me in, gave me a tour, and my phone was blowing up, my social media all the fans were hitting me up. That support helped me throughout the season.”

The Riders came agonizingly close to a Grey Cup appearance and they’ve built a strong foundation on both sides of the ball. Having Elimimian’s influence, on and off the field, would be nothing but positive for a team looking to take another step in 2020.