Timing is everything for French receiver Mahoungou

Timing is everything for French receiver Mahoungou

Anthony Mahoungou was almost a member of the Winnipeg Blue Bombers, and the Edmonton Eskimos gave him a tryout, but lucky for him he declined one offer and didn’t get the other.

Mahoungou, one of two players selected from the 23 who tried out at the CFL Global Combine in France this past weekend to attend the CFL Combine presented by New Era in March, was approached by Winnipeg after getting cut by the Philidelphia Eagles in 2018, as well as the Eskimos. In fact, Edmonton gave him a tryout a year ago.

“I know it sounds strange to say, but I’m pretty happy today that things worked out that way. If I had accepted the offer to be placed on either roster, I would not have been eligible to compete as a Global player.”

In other words, timing is everything. 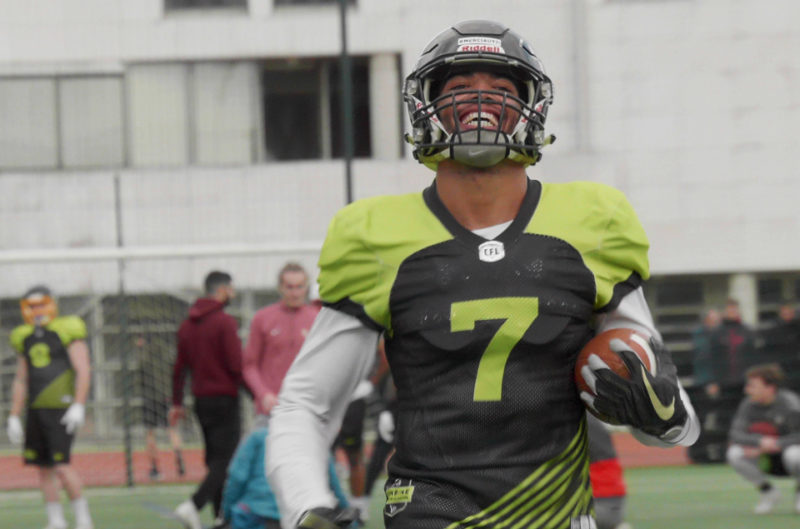 Anthony Mahoungou was one of two players selected from France to attend the CFL Combine in Toronto (CFL.ca)

The six-foot-three, 215-pound native of Paris, who started playing football at the age of 13 after tagging along with his older brother, ended up catching passes for the University of Purdue Boilermakers. Although he loves playing defense, (he said he idolized Baltimore Ravens legendary safety Ed Reid) he was a natural receiver and at Purdue, timing was also important. He did not blossom until late in his senior year, but it came at the right time and put him on everyone’s radar. He was close to getting drafted in the 2018 NFL Draft but when he didn’t, the Eagles picked him up as a free agent on draft day, although he was released just before the 2018 regular season.

“That was a blow. I thought I was having a good pre-season but when I didn’t see any action in the final game, I knew something was up. I guess I got caught in the numbers game. The team needed a tight end. It was tough.”

So, he turned to Germany and joined one of the top teams in the league in 2019, the Frankfurt Universe. In nine games he caught 42 passes for 692 yards and 10 touchdowns. He had an ulterior motive though.

“I knew that Frankfurt had an excellent secondary and I wanted to practice against it, especially against former Iowa Hawkeye BJ Lowery. I wanted to test myself every day at practice.”

He is definitely happy about this new turn of event with the CFL. He has discovered how much of the Canadian game relies on passing.

“I admit I did not know much about the CFL before but when Edmonton approached me I started doing my homework. That big field with all that motion and only three downs is made for receivers. I can’t wait.”

When he took up football in his early teens, friends and family wondered why. Football is no more than a niche sport in soccer-mad France. It wasn’t until he had played for the French national team that people began to take notice. And then playing for Purdue only added to that. But it all carried a burden.

“People began sending me messages from all over France and the rest of Europe too. I realized I was representing my country and this continent. It was an enormous responsibility but a blessing too. Something I carry with pride.”

Greg Quick, the CFL Director of Global Scouting definitely liked what he saw in Mahoungou:

“He was very impressive and technically was the best receiver we have seen. He catches and secures the ball well and gets in and out of routes easily. He is very polished. I hope to be able to see him play in the CFL.”

With the weight of an entire continent resting on his shoulders and the hopes of football people around the world behind him, maybe this time the “timing” for Mahoungou will be right.